One NSW family had a day to remember after the couple welcomed a new baby boy while strangers rescued seven prized racehorses from their flooded property an hour away.

Sean and Genevieve Driver thought the most stressful part of their Wednesday would be bringing a new horse to their racing business, Kurrinda Bloodstock, in Broke, one hour west of Newcastle.

But they were quickly proven wrong when rising floodwater threatened to drown their seven horses while they were in hospital an hour away for the birth of their son, Romeo. 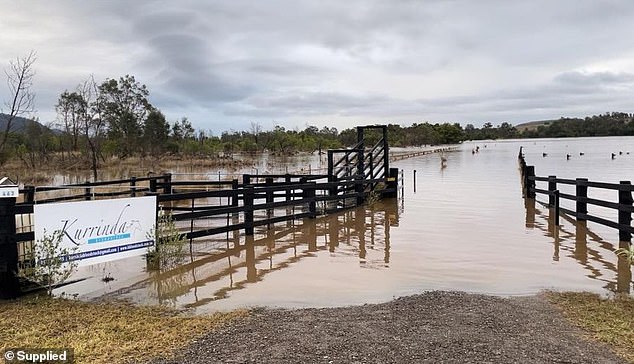 Kurrinda Bloodstock (above), Sean and Genevieve Driver’s racehorse business in Broke, unexpectedly flooded on Wednesday with water reaching higher than the March floods

Mr Driver said on Wednesday afternoon he was confident he and caretaker Shane Freer had taken all caution necessary to ensure the horses were safe from the rising river.

They had moved five of the racehorses to the highest paddock on the farm at the front of the property and left two others in a secure stable.

‘We didn’t believe we’d get caught out after March [floods],’ Mr Driver told Daily Mail Australia. ‘We believed we were prepared.’

Mr Freer and his two boys were also staying at the property in case anything went wrong. 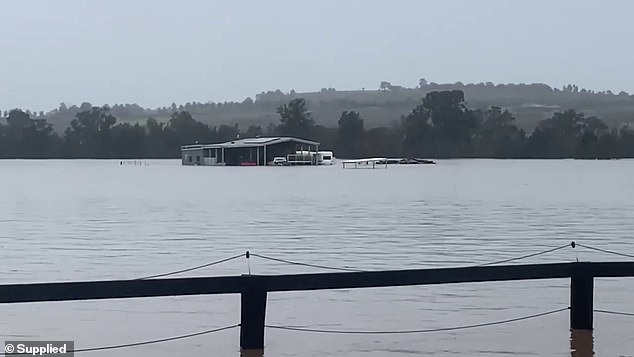 Mr Driver had left the property with his caretaker but floodwater rapidly rose in 30 minutes, trapping the caretaker inside the home and flooding paddocks where the racehorses were kept (pictured, the paddocks and stables the seven racehorses were in)

Mr Driver left the farm at about 6pm for his home in Maitland when he received a panicked phone call from Mr Freer halfway through his trip.

In the half-hour he’d been gone, floodwater had risen up to the farm home and flooded the paddocks.

‘Shane and the boys were stuck on the top bunk of a bed. They were debating cutting a hole in the roof to wait for help,’ Mr Driver said.

‘The water was up to the horses’ necks but they couldn’t get to them even though they were just 150 metres away. The flow of the water was too strong.’

Mr Driver said ‘third and fourth generation’ families in the area said they’d ‘never seen anything like it’.

Desperate to save his horses, Mr Driver turned around and tried to get back to the farm but was cut off by floodwater and poor road conditions. 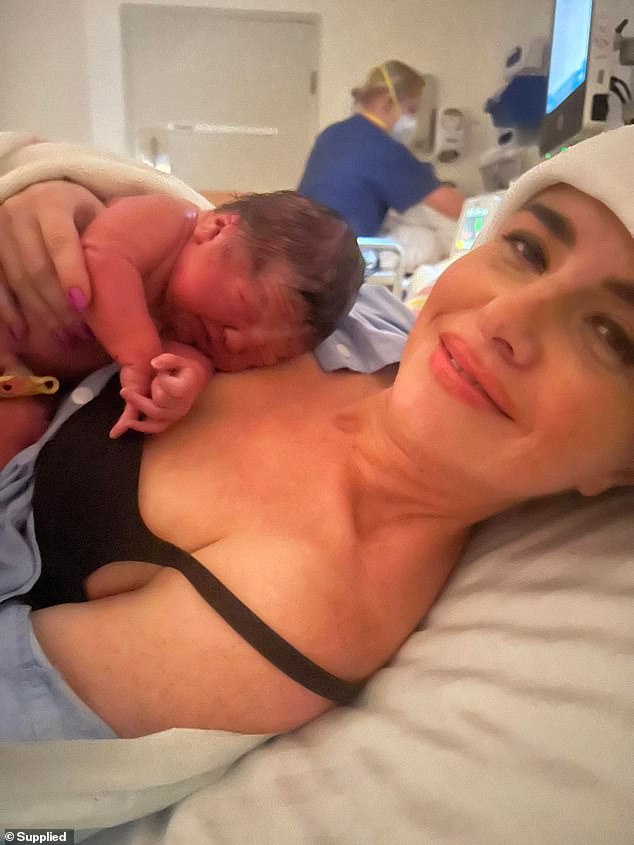 While the farm flooded and the racehorses were in danger of drowning, Genevieve Driver went into labour and gave birth to little Romeo (above)

‘I had to turn around and go back. I couldn’t get through,’ he said.

Mr Driver only got halfway through the same drive when he received another phone call, this time from his wife saying she’d gone into labour.

‘Urgent, can anyone give me an update on Milbrodale road?’ the post read.

‘Our caretaker has water rapidly filling inside. Can anyone tell me what they can see from the front of our property? We have seven horses on site at present. Thank you.’

While the Drivers rushed to hospital, caring members of the Broke community got busy sharing the post with the SES and offering help. 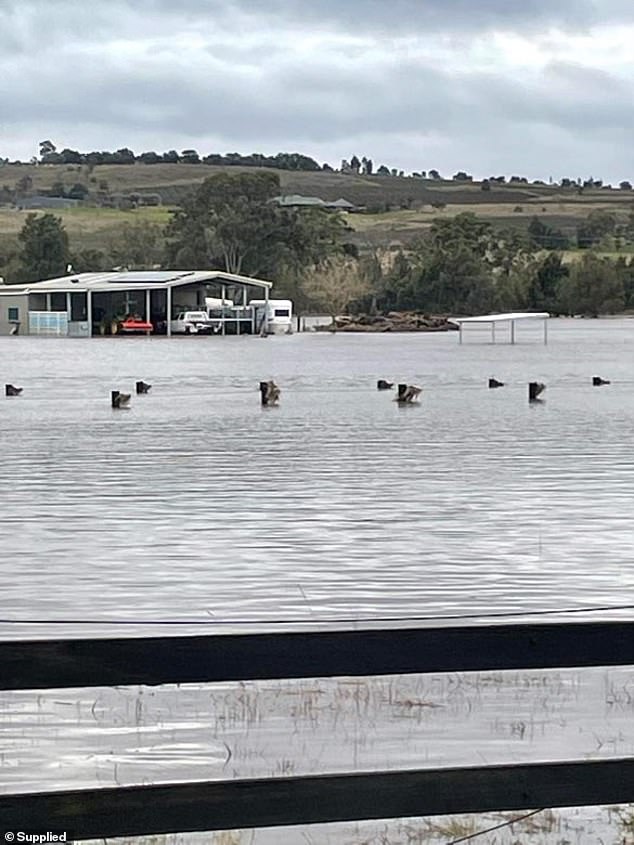 Kind strangers on the Broke community Facebook page rushed in a boat to the property to rescue the caretaker, two boys and seven horses while the Drivers were in hospital an hour away (pictured, the flooded paddock and stables where horses were rescued from)

Mr Freer told Mr Driver he and the two boys were still trapped inside the home and ‘things are getting really scary’.

One of the company’s horse trainers, Scott Singleton, drove from Scone, about 100km north of Broke, to convince an SES or NSW Police boat to take him to the property.

‘I was on the phone with him,’ Mr Driver said. ‘He was trying to get out on a boat but just couldn’t get through.’

Luckily Melissa and Cameron Turner, who the Drivers had never met before, saw the Facebook post and were able to rush their tinny boat over to the property.

The determined couple – with the help of another local, Jessica – first rescued Mr Freer and the two boys from the home before using a chainsaw to cut the paddock fences and help the horses swim to safety.

‘They risked their lives, the water was going so fast,’ Mr Driver said. 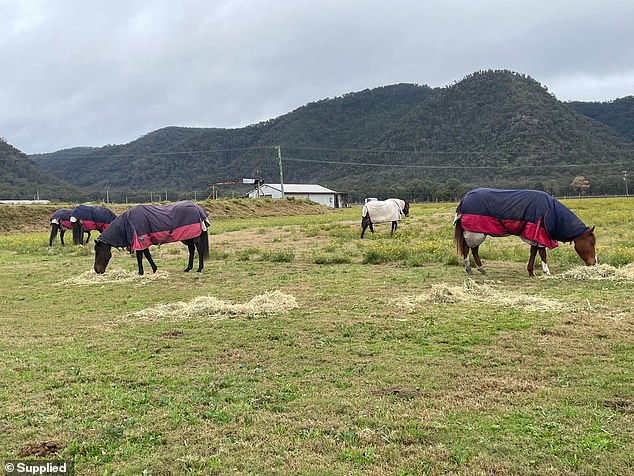 ‘I’ve never met them but when you go through something like this together, you feel like you’ve known each other 10 years.’

Mr Freer and the boys spent the night at the Bulga flood refuge centre while the five horses stayed at higher paddocks at neighbour Kathryn’s farm.

Even more good news came at 8.50pm when Mr and Mrs Driver welcomed their healthy son Romeo to the world.

‘He’s seven pounds and mum and bub are both happy and healthy,’ Mr Driver said.

The next morning another kind stranger, Kelly, went to check on the horses in the stables.

The impromptu rescue team wasn’t able to reach them the night before and Mr Driver said he was expecting the worse. 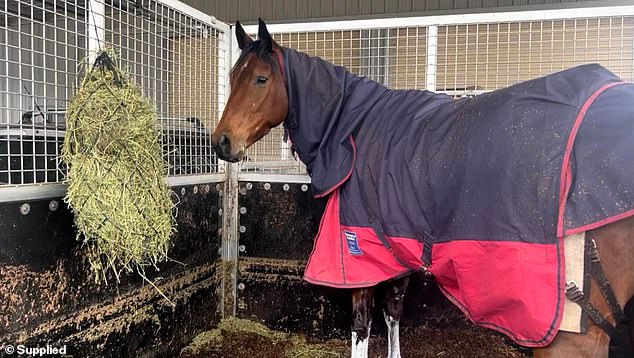 Instead, Kelly discovered the two horses ‘in high spirits’ and was able to move them to a drier area.

‘They’re in such good order,’ Kelly said in a video to Mr Driver.

The video showed both horses chowing down on fresh hay and water after their long night.

‘We just want to thank everyone who helped,’ Mr Driver said.

‘Without them we would’ve had three boys stranded on a farm roof and seven dead horses.’

All roads in and out of Broke were cut off shortly after 5pm on Tuesday, the day before the Drivers’ farm flooded. 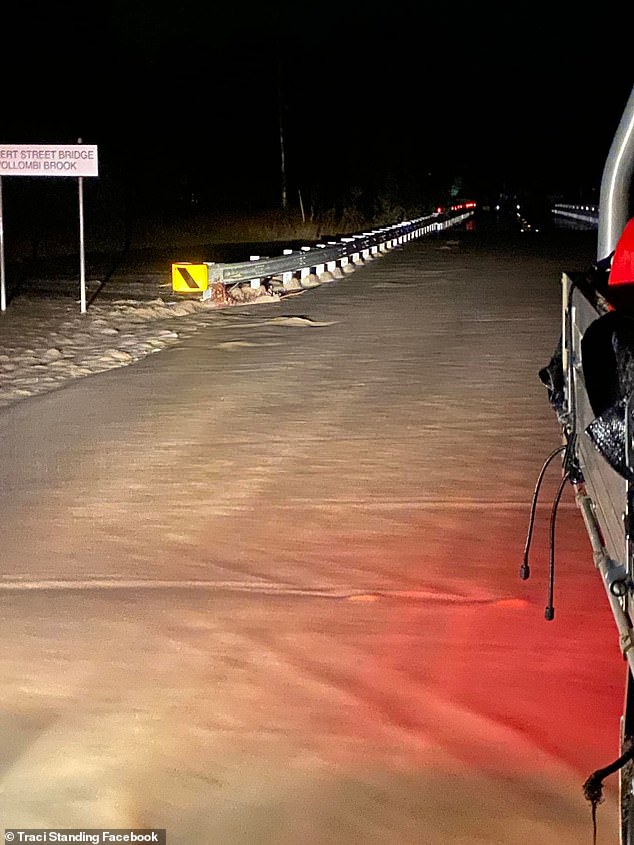 It is believed about 60 homes have been destroyed by flooding in Broke, The Daily Telegraph reports.

Fortunately the water has started to recede following ‘extraordinary’ rainfall.

‘We’ve seen widespread 100mm to 300mm over the last 24 hours particularly around the Mid North Coast. We saw 305mm in Taree and 213mm in Forster,’ the Bureau of Meteorology’s Diane Eadie said.

‘Singleton (26km north of Broke) was an area of concern overnight. It looks likely now that we’ve seen that peak at around 13.71m, which has exceeded the level that we saw in March 2022. Good news with the Singleton area is that it is likely now that we will start to see those (ease).

‘Maitland is still at risk and we could potentially see major flooding in the Maitland area of 10.5m.’

Lisandro Martinez was 'dropped as a transfer...

Follow us on Telegram for the latest updates: The fugitive couple, who allegedly scammed millions of dollars from...

Ryan Giggs ex-girlfriend told a friend that bruising on her wrist was because of 'rough sex' with the former...

Judge Robert Rinder delighted fans on Monday as he returned to Good Morning Britain hosting duties. The barrister, 44, was...

A man who was told he only had a year to live if he didn't lose weight has revealed...

Another hosepipe ban was announced today, with Cornwall and...
- Advertisement -