Newly-unearthed footage shows the moment a MV-22 Osprey helicopter crashed into a US warship in 2017, killing three young Marines who were on board.

The clip, first posted online Saturday, shows the sophisticated helicopter – which can fly like a plane and hover like a chopper –  trying to land on the deck of the US Green Bay of the coast of Queensland, Australia, on August 5, 2017.

But the chopper – which was carrying 26 members of Marine Medium Tiltrotor Squadron 265 – suddenly drops unexpectedly.

It strikes its left engine compartment off the deck while pitching dramatically, with the sailor who was filming running to safety just as the chopper begins to disappear from view.

Moments later, it plunged 30 feet and slammed into the Pacific Ocean. 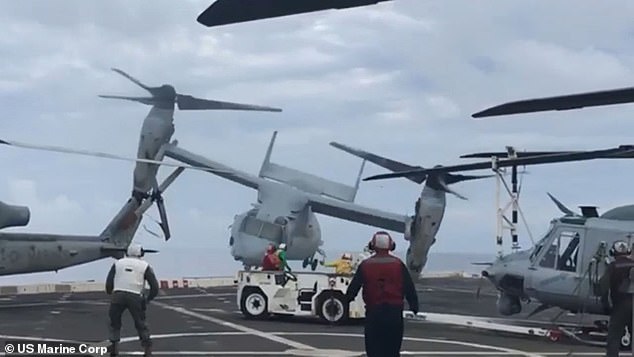 This is the disturbing moment an MV-22 Osprey helicopter carrying 22 US Marines crashes into the deck of the USS Green Bay, before plunging 30 feet into the Pacific, killing three. The accident happened in August 2017, with footage of the horror emerging over the weekend 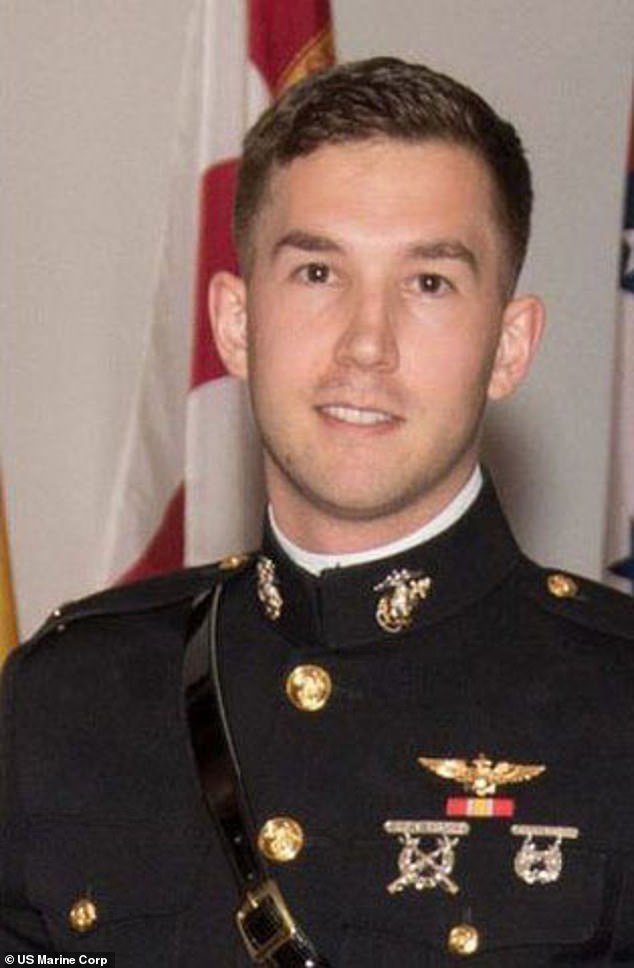 Killed in the crash was 1st Lt Benjamin Cross, 26, who was co-piloting the chopper. His co-pilot – a Marine Major – has never been named, but an investigation found neither pilot was at fault 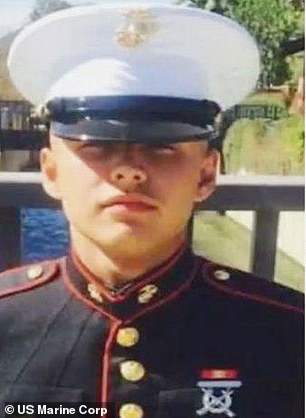 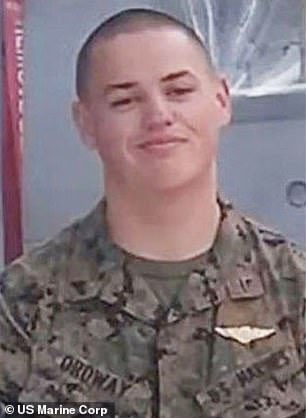 Also killed in the crash where Pfc. Ruben Velasco (left), who turned 19 days before his death, and Cpl Nathaniel Ordway (right) who was 26

A hole in the cockpit of the damaged aircraft quickly saw it flood with water, causing it to sink.

All but three of those service personnel were rescued, with the bodies of three others recovered following a 12 hour search.

They were unable to escape the cockpit as it sank.

Cross was co-piloting the aircraft at the time of the crash.

According to Military.com, Cross and Ordway were both assigned to Marine Medium Tiltrotor Squadron 265 out of the Futenma base in Japan.

Velasco – who turned 19 days before his death – served with the 3rd Battalion, 5th Marines, and was based in Camp Pendleton in California. 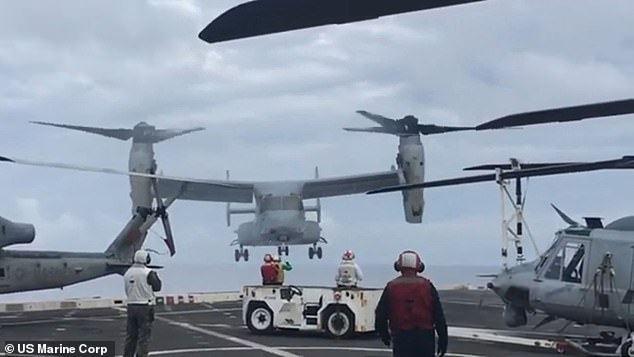 The final moments of the doomed Osprey were captured by a sailor on the deck of the USS Green Bay. That sailor ran for cover as the chopper began to crash, and the full tragedy was not captured on camera 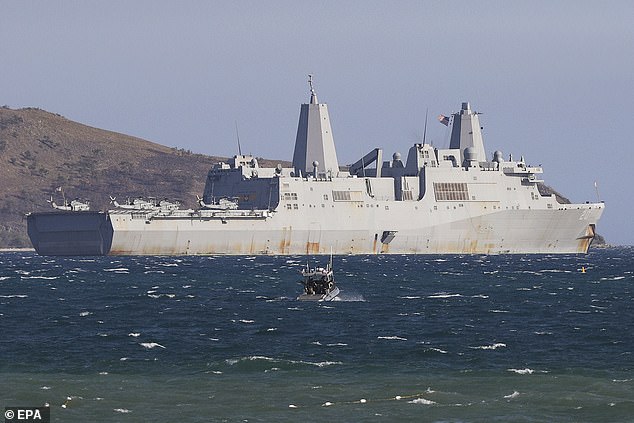 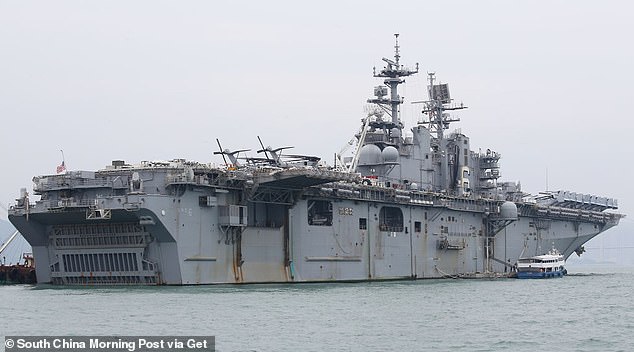 The Osprey had been operating from the USS Bonhomme Richard at the time of the smash, as part of a three-chopper squadron practicing embassy reinforcement, evacuation and casualty drills.

It had successfully completed multiple flights between the Bonhomme, Raspberry Creek base and a third ship called the USS Ashland prior to the fatal crash on the Green Bay.

A Pentagon investigation later concluded that the Osprey had crashed because it faced too much ‘downwash’ – air deflected around its rotors.

That report, seen by The Drive, further revealed that the aircraft had insufficient thrust to hold a hover pattern, and that the Osprey may have been carrying too much weight.

Military officials said that no-one was at fault over the crash, and that the three young Marines killed all died in the line of duty, and not as the result of misconduct.

According to the crash report, the aircraft’s pilot – a Marine Major who has not been named  – ‘recognized and attempted to correct a 200-300 foot per minute rate of descent with an application of power using the Thrust Control Lever.’

But their attempt to save the chopper failed. It ended up striking the deck of the Green Bay, damaging a nearby chopper and striking a steel staircase before plunging into the Pacific.

After the crash, Lt. Cross’s father Robert Cross told CBS News that his son had great faith in the safety of the controversial aircraft, even after a 2000 crash in Arizona that killed 19 Marines.

Cross said: ‘He told me that they had so many redundant safety systems in the plane that if one failed there was always a backup.’

White mother whose partner is half-Jamaican is...

As we told you yesterday, U.S. Attorney Rachel Rollins released a statement on August 17 on behalf of the...

Monnie Drea is a renowned TikTok star from the United States. Monnie has roused millions with her imaginative thoughts...

Tesco customers are fuming after the supermarket giant cancelled all of its home delivery orders after 1pm on Friday due to...

There were a few reports that the American pundit...
Celeb Zone

What is Lil Xan's Net Worth?Lil Xan is an...
Celeb Zone

The tailored shirts and high-slung skirts were left in...
Celeb Zone

What is Johnny Weir's Net Worth and Salary?Johnny Weir...
- Advertisement -