The Biden administration is hitting back at Amazon founder Jeff Bezos on Sunday after the billionaire suggested President Joe Biden is either ignorantly or knowingly putting the United States on the wrong track.

National Security Council Coordinator for Strategic Communications John Kirby said his boss would take ‘great exception’ to being accused of misdirecting the American people during an interview on Fox News Sunday, in the White House’s first response to being called out by Bezos late the night before.

Amazon’s founder took issue with a message to companies that set sky-high gas prices posted by Biden’s official White House handle warning of ‘a time of war and global peril’ and demanding, ‘Bring down the price you are charging at the pump to reflect the cost you’re paying for the product. And do now.’

‘Ouch. Inflation is far too important a problem for the White House to keep making statements like this,’ the billionaire shot back in a retweet.

But Kirby said ‘neither’ was the case when asked about the complaint on television the next morning.

‘The American people are facing pain at the pump, clearly, now we’re at what – $5 per gallon? And the president is working very, very hard across many fronts to try and bring that price down,’ the spokesman continued.

He highlighted Biden’s initiatives toward lowering gas prices in recent months, all of which had done little to abate the surge that only subsided within the last three weeks.

Working with G7 leaders toward a price cap on Russian oil, releasing record numbers of oil the US’s Strategic Petroleum Reserve and calling on Congress to pass a three-month summer gas tax holiday are the measures Kirby listed.

‘If everybody cooperates on this, we can bring the price down at least by about a dollar a gallon,’ he claimed.

‘He tells you exactly what he’s thinking and in terms that everybody can understand,’ Kirby said. ‘So I think we obviously take great exception at the idea that this is somehow misdirection.’ 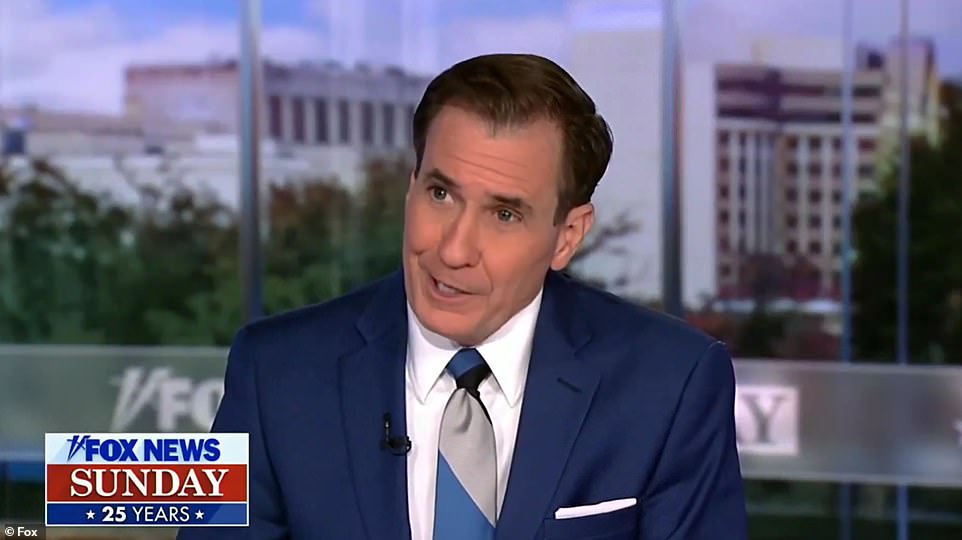 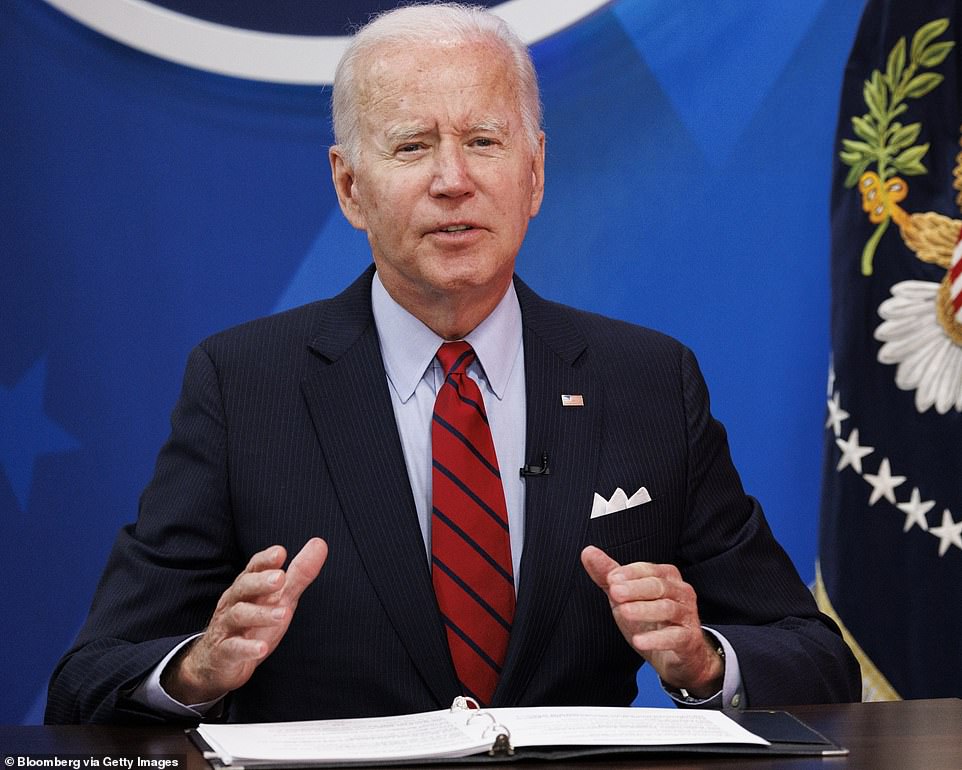 President Joe Biden tweeted at the companies running gas stations: ‘Bring down the price you are charging at the pump to reflect the cost you’re paying for the product. And do it now’ 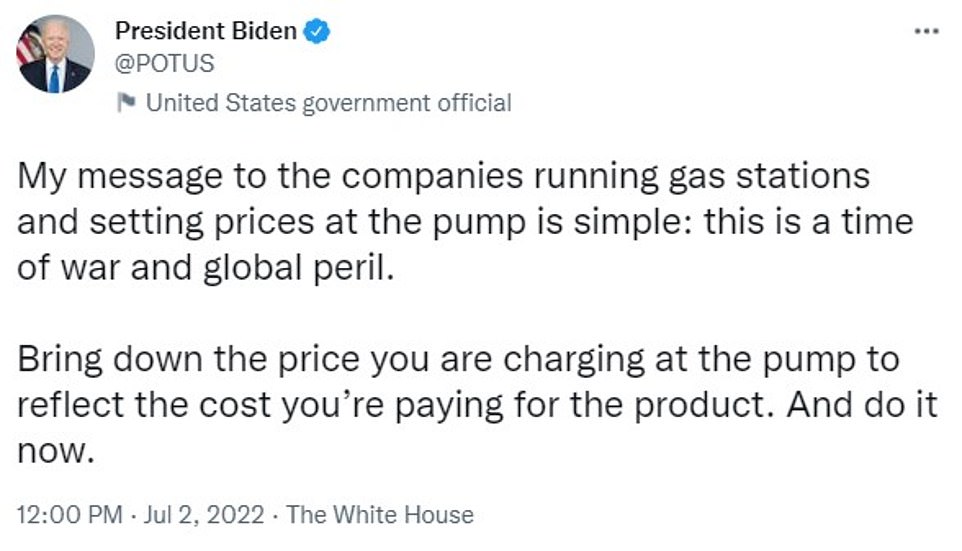 The president’s message caught the attention of the third richest person in the world, Amazon founder and former CEO Jeff Bezos 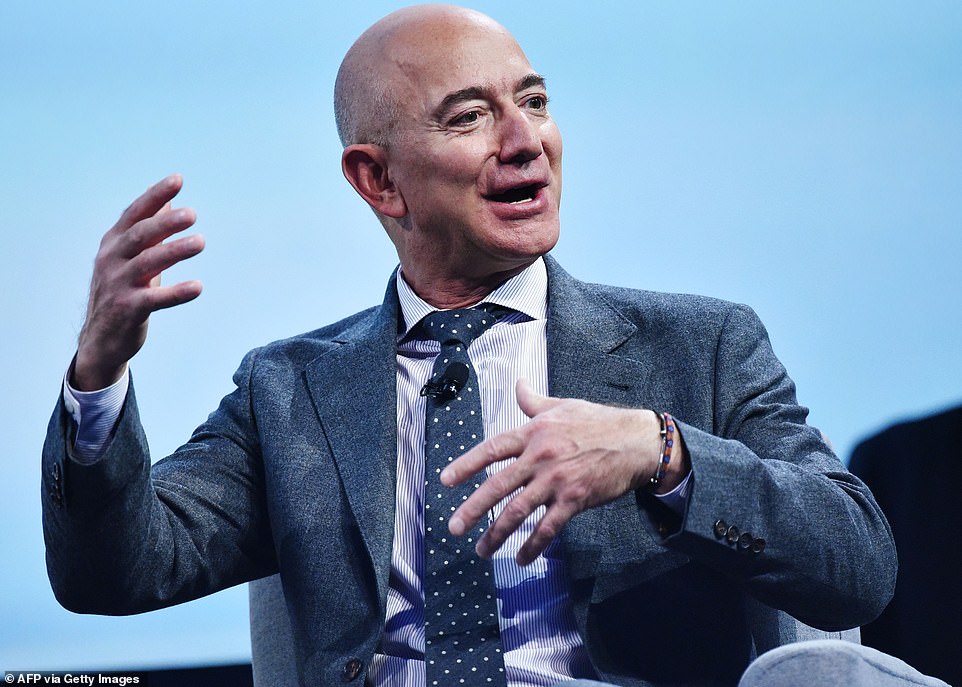 During the 2020 election cycle, Amazon donated $1.7 million to the Biden campaign but the company while donating $164,000 to the Trump campaign

‘The president is speaking honestly with the American people about what he’s trying to do to bring the prices down but he was honest even before the invasion.’

Biden’s tweet came amid the July 4th holiday weekend where Americans are paying an average of $4.81 for gas as of Sunday.

The communist mouthpiece sent a sarcastic tweet highlighting how Biden was seeking to undermine the principles of supply and demand which dictate prices in a free-market economy like that of the United States.

Weihua tweeted: ‘Now US President finally realized that capitalism is all about exploitation. He didn’t believe this before.’

The reporter tweeted something similar to Biden in 2021 when he responded to the president’s tweet that read: ‘Let me be clear: capitalism without competition isn’t capitalism. It’s exploitation.’

Weihua wrote then: ‘Capitalism is all about exploitation. Period.’

Biden’s tweet earned praise from Chen Weihua, a reporter and columnist for the state owned China Daily. Weihua is based in Brussels, Belgium 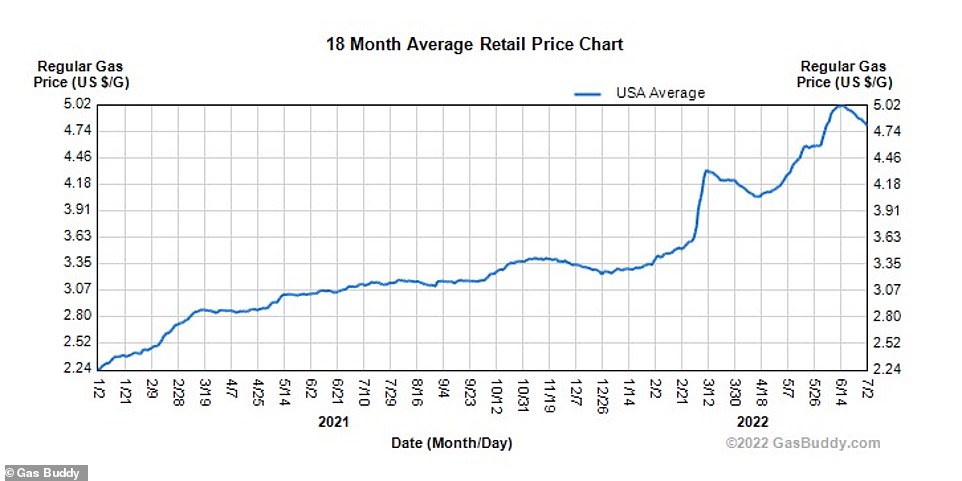 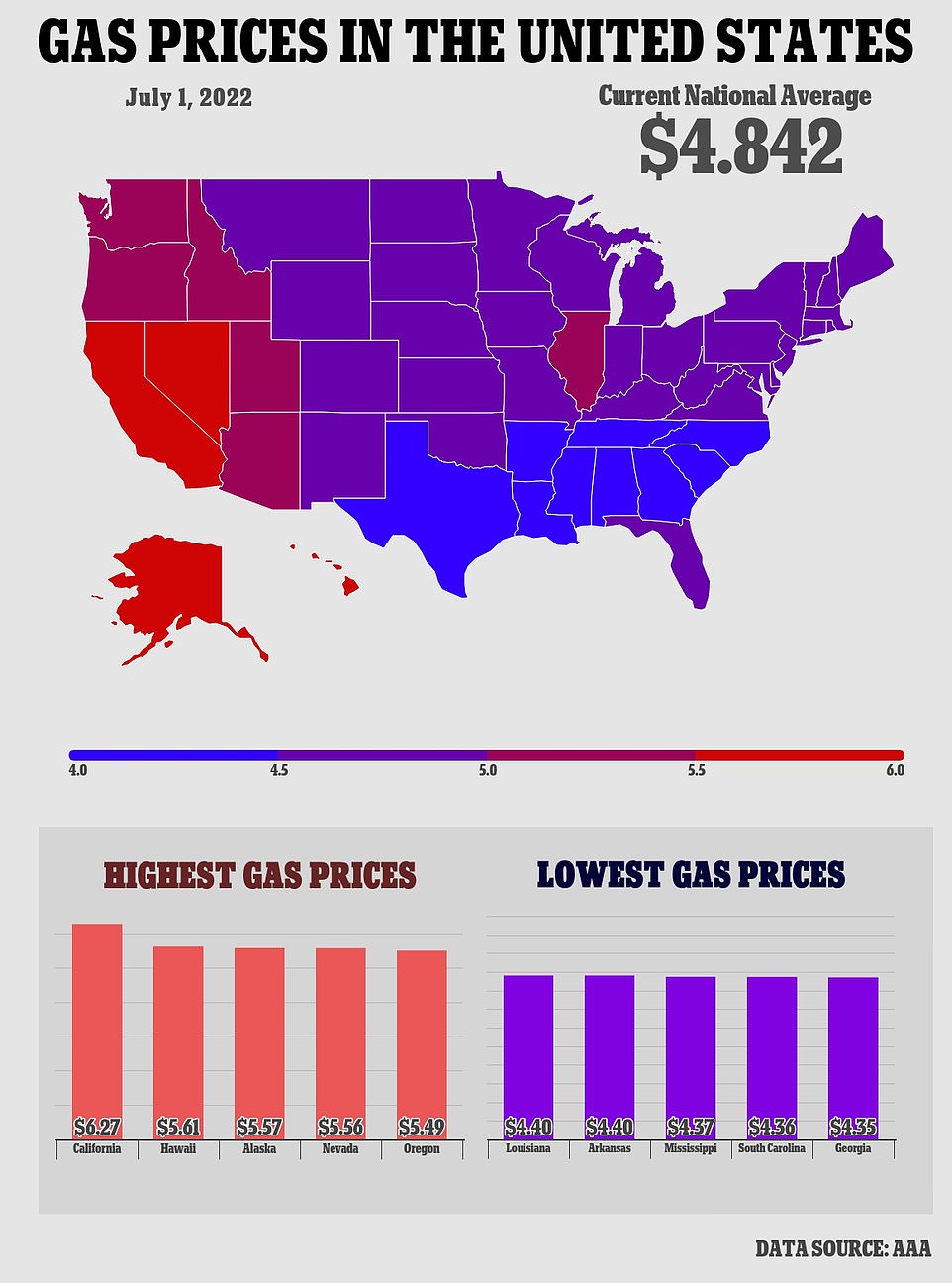 Another of those who responded was Texas Senator Ted Cruz who tweeted:’My message to the guy running your teleprompter. It’s YOUR fault. Reverse the dozens of executive orders, regulations & agency actions targeting American energy, and gas prices will fall… FAST. #Bidenflation.’

The president made a similar plea to oil giants in a June 22 speech that read in part: ‘These are not normal times. Bring down the price you are charging at the pump to reflect the cost you are paying for the product.’

Biden begging for companies to reduce prices comes shortly after his administration failed to sell even his own party on a 90-day gas tax break.

According to an NBC report, if the tax break went ahead, the average American would only save 12 cents per gallon.

As the price of gas continues to skyrocket for American consumers, the Wall Street Journal reported earlier this week that the Biden administration ‘plans to block new offshore oil drilling in the Atlantic and Pacific oceans.’

Since March 2022, the president has sought to lay the blame for inflation at the feet of Russian President Vladimir Putin calling inflation: ‘Putin’s price hike.’

A Democratic Party strategist told Politico in June that the catchphrase was not resonating with voters saying: ‘It’s not meeting voters where they are. It’s much more important to feel their pain than explain it.’ The article quoted other strategists who said that the phrase sounded more like ‘blame-shifting than problem-solving.’

Last money, Federal Reserve Chair Jerome Powell broke with the Biden administration in admitting that inflation was already high prior to Russia invasion of Ukraine in February.

Although the plan does allow for oil companies to lease drilling areas in the Gulf of Mexico and in Alaska’s Cook Inlet until 2028.

Back in 2020, while Biden was running for president, his campaign promised to stop new oil and gas drilling on federal land and water.

In a one-on-one debate with fellow Democrat Bernie Sanders, Biden said: ‘No more drilling on federal lands, no more drilling, including offshore – no ability for the oil industry to continue to drill – period.’ 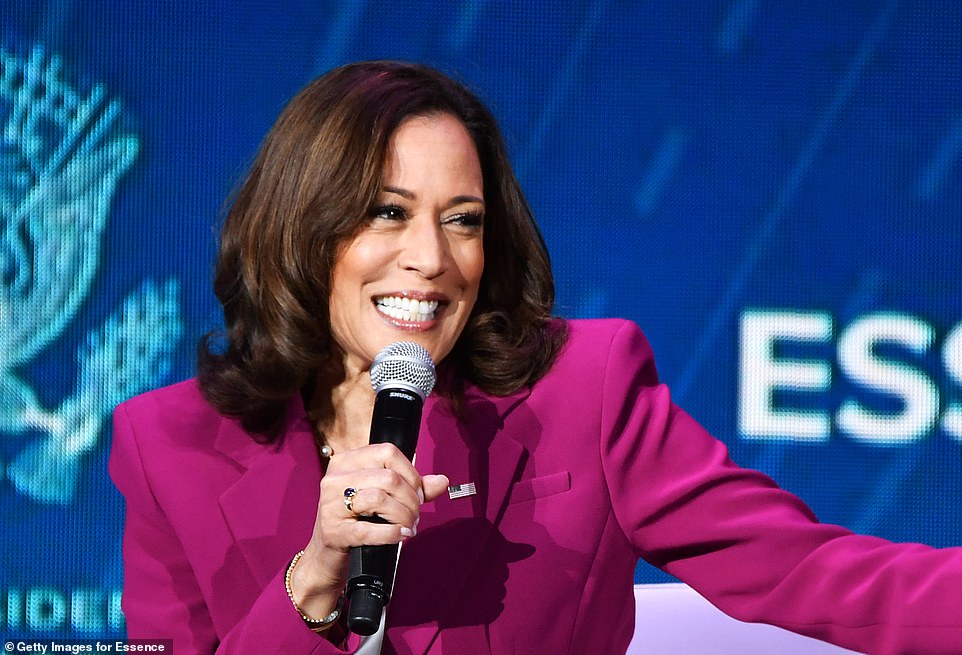 During an appearance at the New Orleans Saturday for the Essence Festival of Culture, Vice President Kamala Harris told WDSU that lowering the price of gas is ‘probably’ the Biden administration’s top priority.

Harris said: ‘The President and our administration’s probably highest priority is bringing down the price of gas and cost of living.’

Meanwhile earlier this week at a NATO summit in Madrid, Biden said Americans will have to put up with high gas prices for ‘as long as it takes’ due to Russia’s invasion of Ukraine.

Following those remarks, New York Republican Congressman Andrew Garbarino took aim at the president attempting to blame Russia’s invasion of Ukraine for the price of gas on Fox Business Network’s ‘Mornings with Maria.’

Garbarino also said: ‘In November 2020, gas prices were around 43 — a barrel of oil was $43 a barrel. And now, a month before Putin invaded Ukraine, it was $87. So, it was already doubled in one year of his presidency.’

The congressman went on to call Biden’s excuses ‘a joke.’

On July 1, Biden economic advisor Brian Deese said that Americans should ‘stand firm’ on paying record-high gas prices because the ‘future of the liberal world order’ is more important.

‘What do you say to those families that say, ‘listen, we can’t afford to pay $4.85 a gallon for months, if not years?’ the director of the National Economic Council was asked on CNN Thursday.

‘What you heard from the president today was a clear articulation of the stakes. This is about the future of the Liberal World Order and we have to stand firm,’ he replied.

Deese added: ‘At the same time, what I would say to that family and Americans across the country is you have a president and an administration that is going to do everything in its power to blunt those price increases and bring those prices down.’

President Biden promised the U.S. would be making sacrifices ‘as long as it takes’ for Ukraine, but a new poll shows public appetite for unchecked support is waning.

Biden has promised not to put boots on the ground in Ukraine.

Forty-four percent of respondents said they did not approve of Biden’s handling of the war in Ukraine, 36 percent said they approve. 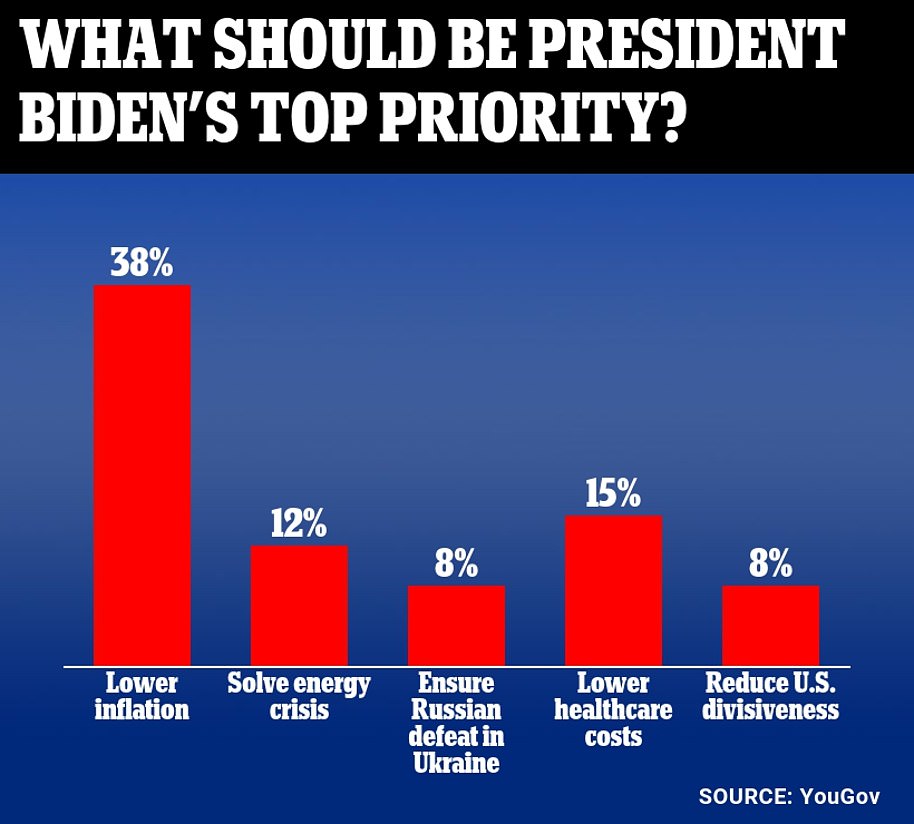 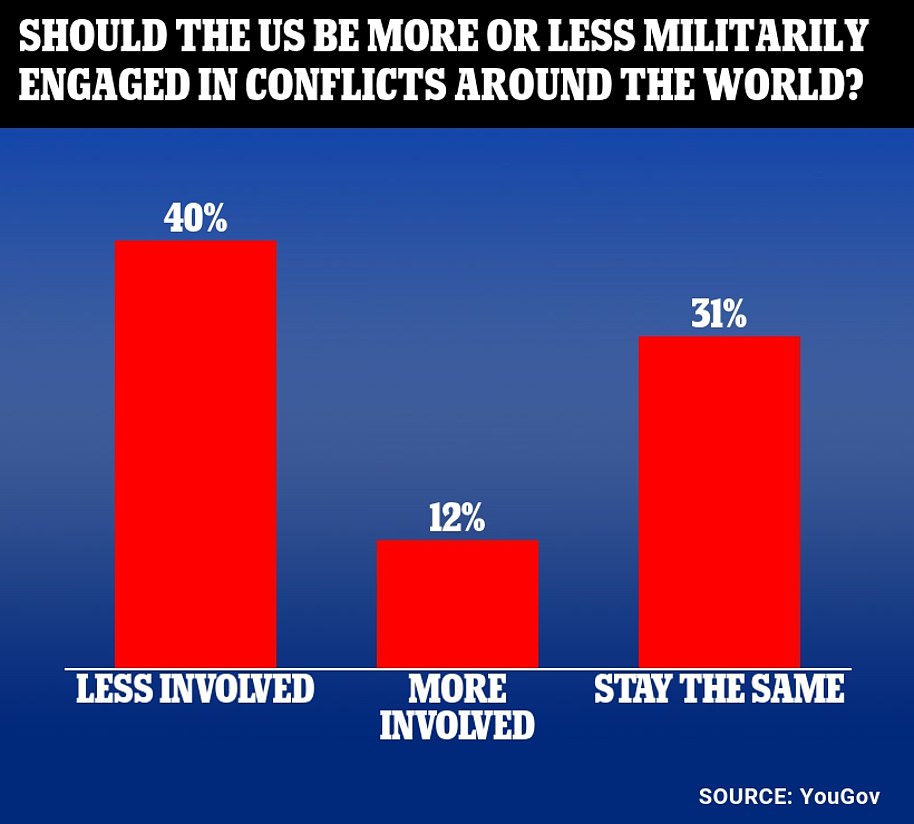 The U.S. has given almost $60 billion to Ukraine since the Russian invasion – $5.5 billion from the Biden administration, and $54 billion authorized by Congress. That figure does not include the tens of billions worth of American weapons and equipment transferred to Ukraine.

Concerns have mounted in Congress about the Pentagon’s ability to monitor the sudden influx of cash for Ukraine and to track the thousands of U.S. weapons headed to the nation.

Meanwhile, Russia has refocused its efforts on Ukraine’s eastern Donbas region. Vladimir Putin said this week there is ‘no use in setting an end date’ to what he calls the ‘special military operation in Ukraine.’ Neither Russia nor Ukraine are likely to want to come to the negotiating table and make concessions any time soon.

Charles Babalola is a British entertainer who is presently...
Celeb Zone

A fan of one of Australia’s top models has...
Celeb Zone

Cassidy Valentine is an online entertainment powerhouse from the...
Celeb Zone

Senators have been inside the US Capitol all night...
- Advertisement -