Author Margaret Atwood has taken a flamethrower to her most famous creation — and nothing could give her greater satisfaction.

The Handmaid’s Tale writer, 82, has responded to rising cancel culture and book bans by devising a version of the novel that cannot be destroyed.

The fireproof one-of-a-kind edition has gone up for auction, and all proceeds will be donated to PEN America, a non-profit aiming to promote free expression.

In a video to promote the auction, the author wears fireproof gloves to torch the award-winning 1985 book. 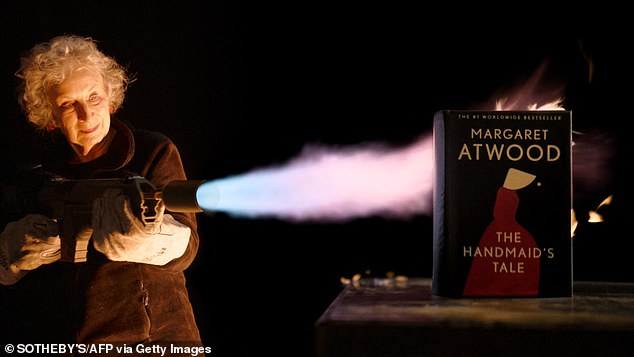 Author Margaret Atwood used a flamethrower near an fireproof copy of The Handmaid’s Tale, which is going on auction to raise money for charity PEN America 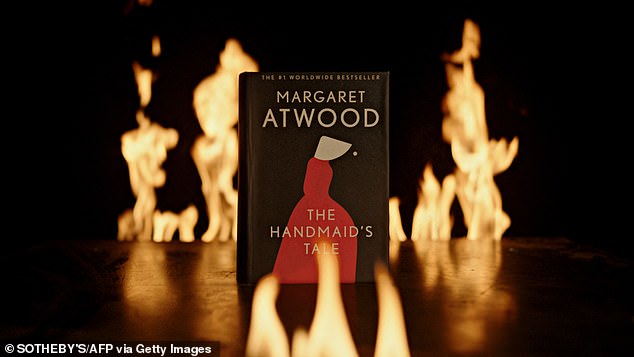 Since its publication in 1985, ‘The Handmaid’s Tale’ has been banned in schools in the US and UK for more than 30 years due to its vulgarity, profanity, and sexual themes.

It was ranked in the top 40 of 100 books that are most frequently challenged books by The American Library Association.

The book’s promotional website claims it is ‘designed to protect this vital story and stand as a powerful symbol against censorship’.

Mark Doyle the chief executive of publisher Penguin Random House, said the ‘unburnable edition is a timely remind of what’s at stake in the battle against censorship’.

In a statement, the company added: ‘Across the United States and around the world, books are being challenged, banned and even burned. So we created a special edition of a book that’s been challenged and banned for decades.

‘Printed and bound using fireproof materials, this edition of Margaret Atwood’s The Handmaid’s Tale was made to be completely unburnable. It is designed to protect this vital story and stand as a powerful symbol against censorship.’

The book tells the story of an alternative ultra-religious and oppressive America where Handmaids are forced to give birth for infertile women of higher social status.

Its red cloak and white hood costumes have been seen at protests for reproductive and women’s rights.

Elizabeth Rawlins was born in Georgia and raised there, and she spent her childhood watching WSB-TV in Atlanta. In...
- Advertisement -

Each year it seems like a new biopic is being released. The Oscars are recognizing the actors starring...

President Joe Biden’s border with Mexico is the deadliest land crossing in the world, according to a United Nations...

It was a family affair at The Rolling Stones‘ BST...
- Advertisement -