Family travel plans have been thrown into turmoil after airport chaos continued on Saturday as Aussies tried to jet off during the school holiday rush.

Passengers at Sydney Airport endured massive delays to check in their luggage as huge crowds crammed together in lengthy queues snaking through the terminal .

The T2 domestic terminal ground to a halt as the nation’s airports continue to struggle to cope with passenger numbers and a critical staffing shortage.

The lines zigzagged through the terminal and even stretched outside, with airlines including Jetstar and Virgin affected.

Passengers are being told to arrive exactly two hours before their flight to help the airport manage crowds, with the delays expected to continue until at least July 18. 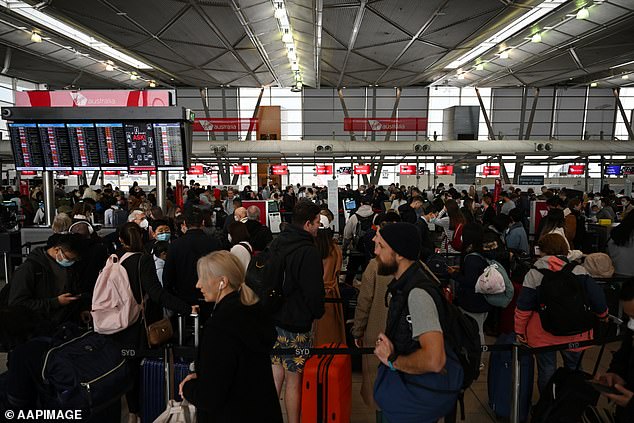 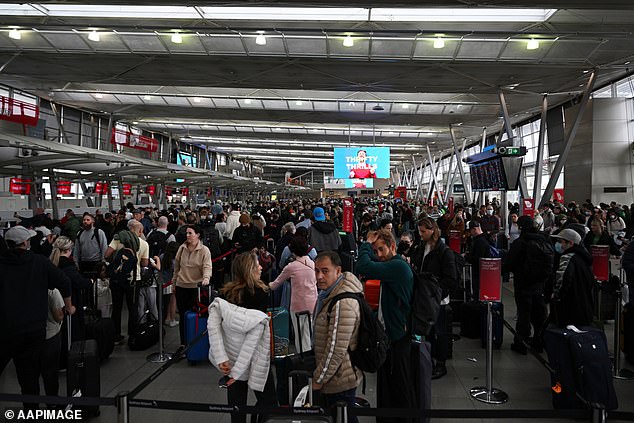 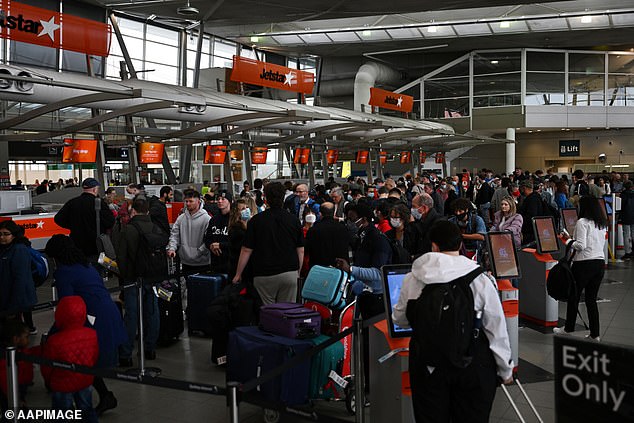 Passengers are being told to arrive two hours before their flight to help the airport manage crowds. The delays are expected to continue until at least July 18 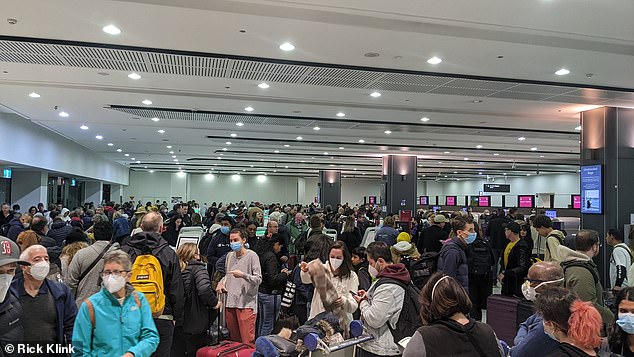 Sydney Airport predicted 2.1 million visitors would be flocking to the gates between June 27 and July 17

Under-staffed check-in counters, delays at security points and an influx of passengers have all been blamed for the chaotic scenes.

The wet weather conditions are also believed to have contributed to the delays.

Sydney Airport is facing a significant job shortage, after it shed about half of its 33,000 staff across the 800 business.

‘There’s still a job shortage of about 5000 roles at the airport,’ the spokesperson said.

Sydney Airport predicted 2.1 million visitors would be flocking to the gates between June 27 and July 17.

Qantas and Jetstar are expecting 350,000 passengers just for this weekend.

Meanwhile, Melbourne Airport is expecting 2.1 million passengers to pass through these school holidays, which is 400,000 more than over Easter.

Shocking scenes from the city’s main airports showed passengers waiting in huge lines on the first Saturday of the break, after many started arriving from 6am.

Brisbane Airport also copped large crowds this week with some describing it as ‘outrageous’.

Families from NSW, Western Australia and the ACT will join the chaos on Friday afternoon. 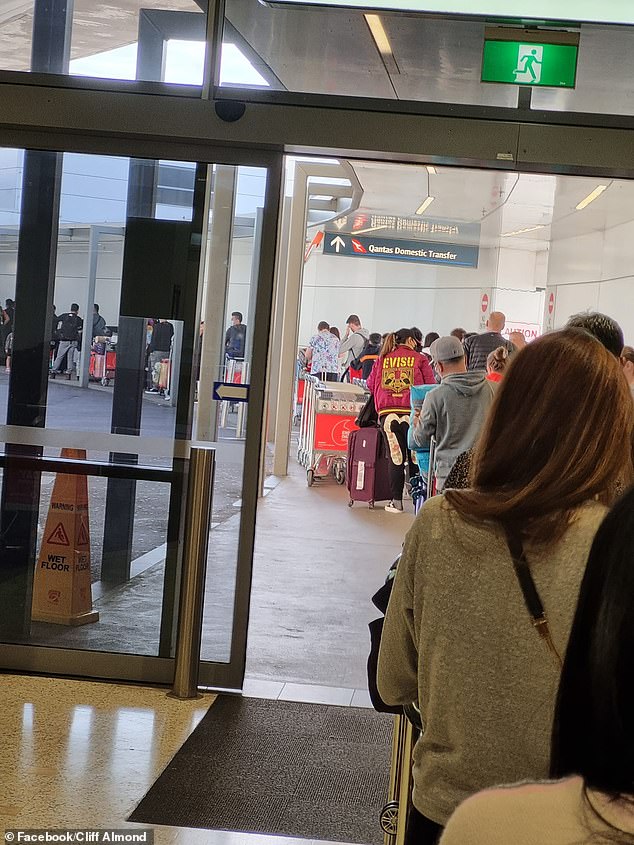 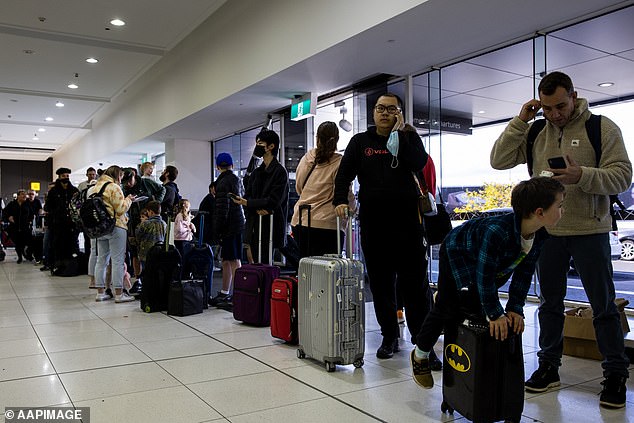 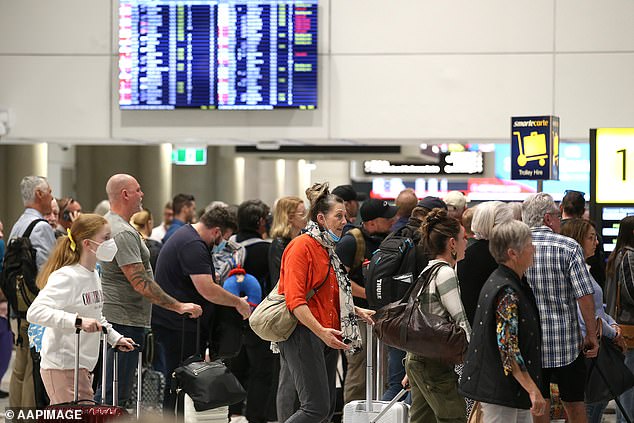 One passenger told The Courier-Mail last week: ‘The queues are outrageous and it’s clear the place is totally understaffed.’

‘How can we expect people to want to travel when they are confronted with scenes like this.’

Virgin Australia forecasted passenger levels would be up by 15 per cent these school holidays compared to the same time in 2019.

It also said numbers would be ten per cent more than the previous Easter holidays.

‘Both airlines carried similar numbers of customers domestically last weekend for the start of school holidays in Victoria and Queensland,’ a Qantas statement said.

‘Both airlines have been putting in place measures to improve their operations and working with airports and suppliers to ensure customer disruptions are minimised over the holiday period.’ 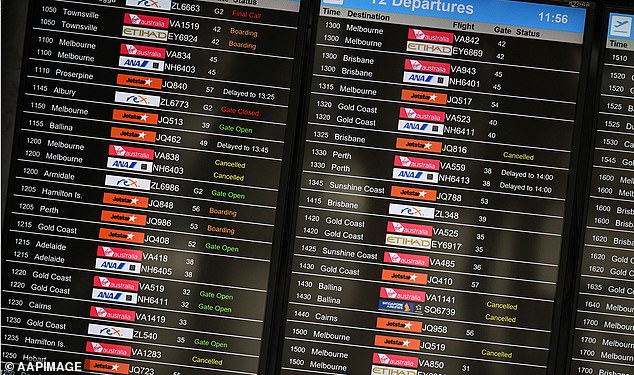 Under-staffed check-in counters, delays at security points and an influx of passengers have all been blamed for the chaotic scene

The Transport Workers’ Union said the airline industry faces a skills shortage since it sacked 12,500 employees during the pandemic.

‘The workers that remain in the industry are under enormous pressure from airports and airlines to plug gaps and keep the gears moving.’

Australians have been taking up the long-awaited opportunities they didn’t have during the Covid pandemic restrictions in 2020 and 2021.

Holidaymakers were forced to cancel and delay travel plans and were stuck in isolation across the country as each state and territory attempted to stamp out the disease.

KPMG predicted in February last year that ‘restless Australian would-be travellers’ would come out of the woodwork after the tourism industry copped a thrashing in the pandemic.

A ferocious pitbull attacked a teenage girl and a...
- Advertisement -