Staff are being sacked at Wimbledon for small transgressions like going to watch the tennis on Henman Hill in light of turnout at the grand slam, it’s been revealed.

A total of 153,193 people attended the first four days of play, the smallest number of spectators since 2007 which saw 148,986 people go to the championship.

Figures are much less than before the pandemic, down 11% on 2019, which workers believe has prompted management to ‘cull’ staff numbers.

The Times has claimed, housekeepers and cleaners are being sacked for going to the toilet ‘without asking’, eating strawberries, and drinking while wearing their uniforms. 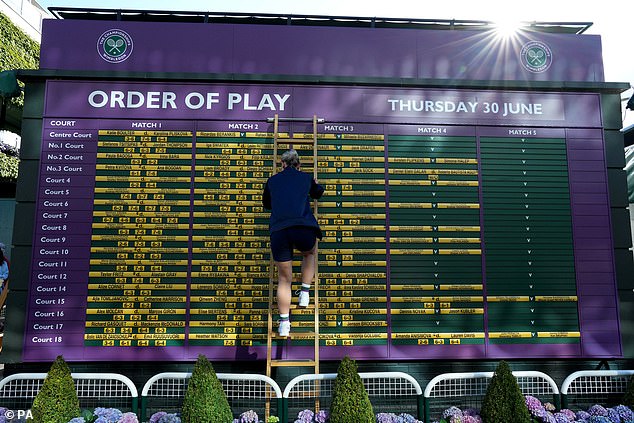 Staff are being sacked at Wimbledon for small transgressions like eating strawberries in light of turnout at the tennis grand slam, it’s been revealed. Pictured: A worker on Thursday is seen updating the order of play 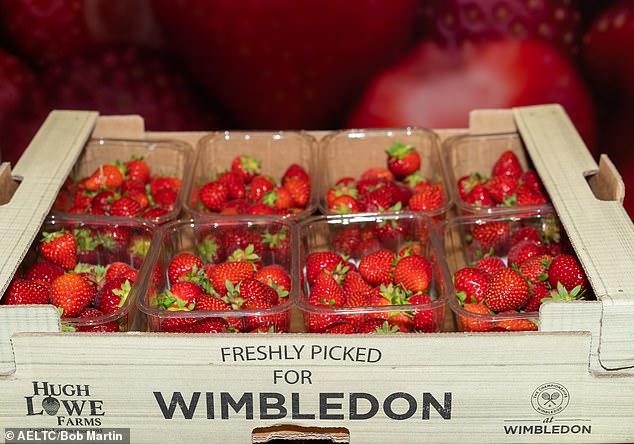 A total of 153,193 people attended the first four days of play, the smallest amount of spectators since 2007 which saw 148,986 people go to the championship. Pictured: Strawberries at Wimbledon on Tuesday 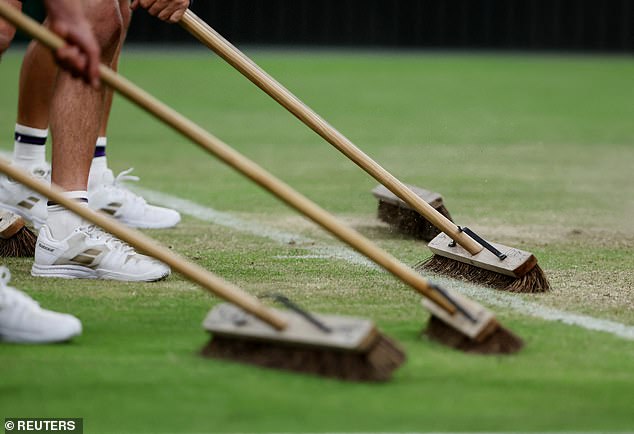 Figures are much less than before the pandemic, down 11% on 2019, which has prompted a ‘cut’ in staff numbers. Pictured: The lawn being cleaned at Wimbledon

The newspaper said in a leaked email that the contractor for Wimbledon told workers that ‘lower than expected’ spectators has meant that the All England Lawn Tennis and Croquet Club – who organise the event – have asked them to look at ‘reducing’ staff numbers.

‘It may become necessary to ‘cut’ staff,’ the email added.

Staff believe this is what is behind the firing on Wednesday of three communications workers who were seen in their uniforms, while off duty, drinking alcohol and watching the action on the screen on Henman Hill.

One person is claimed to have been sacked for going to the toilet without asking while another was ‘fired on the spot’ for sitting down after cleaning the toilets. 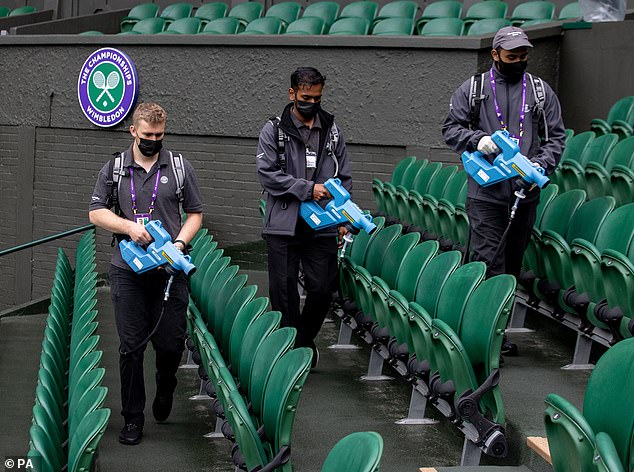 It’s been claimed in light of poor numbers, Wimbledon workers are being sacked on the spot for going to the toilet ‘without asking’, going to watch tennis and are being told not to drink while wearing their uniforms. Pictured: Housekeeping staff spray the seats in Centre Court with a disinfectant at The All England Lawn Tennis and Croquet Club 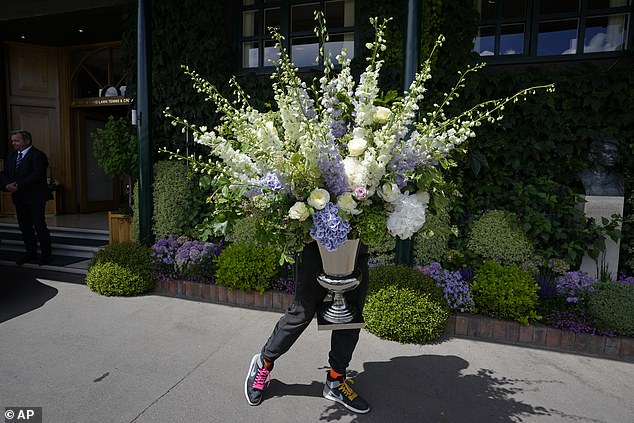 Pictured: A member of the ground staff moves some flowers ahead of the Wimbledon tennis championships in London

‘They’re just trying to cull people,’ one housekeeping worker in their 20s said. ‘Since the email went out, they’ve been very harsh to people, not really giving them any warnings. They’re getting kicked out for relatively minor things.

‘It feels like we’re on edge because when you want to sit down for a bit you’re looking around, hoping no one is watching. When we’ve done our jobs and there’s nothing to do, we can’t just be on our feet all day.’

Another worker is said to have got a ‘final warning’ from their supervisor after a general manager photographed them watching a match while having a five-minute break on Henman Hill.

A 19-year-old woman from the housekeeping team also said she was ‘really chuffed’ to be chosen to work at Wimbledon.

But her friend then got an email saying he will not get ‘any more shifts’ after he was seen eating strawberries on the Hill during his break on Wednesday.

She added: ‘Now we’re literally all bricking it to do anything on our breaks or even sit on the hill after we finish working in case we get told there won’t be any more shifts for us.’

A spokesman for the All England Club said: ‘We value all of the staff who help us to deliver the Championships, they are crucial to staging this world-class event.

‘We meet annually with each of our major contractors to agree the terms and conditions of employment, which are shared with all potential employees.’

Two Georgia men were charged for allegedly using their adopted children to produce pornographic material, according to the Walton...