Sebastian Vettel is a German Formula 1 driver. He’s been racing in F1 since 2006 when BMW promoted him from test driver to the team’s #3 driver ahead of the Turkish Grand Prix. He spent the next few years bouncing up and down until 2009, when he got his star-making shot as a member of the Red Bull racing team.

During his first season with Red Bull, Sebastian was the F1 World Driver’s Champion runner up.

The next year he won the championship.

Sebastian jumped from Red Bull to Ferrari in 2015, staying through 2020. He then moved over to his current team, Aston Martin.

Along the way, Sebastian has earned A LOT of money. Every year for the last decade he has been one of the highest-paid athletes in the world. In a slow year he makes $30 million. In a good year he can easily make $40-50 million.

As of this writing, we estimate that Sebastian Vettel has a net worth of $140 million thanks to career earnings that easily top $350 million.

With Sebastian’s net worth and career earnings numbers in mind, and knowing the method in which he earned that net worth, you can understand why some people were a bit confused when he showed up to last weekend’s Miami Grand Prix wearing this t-shirt: 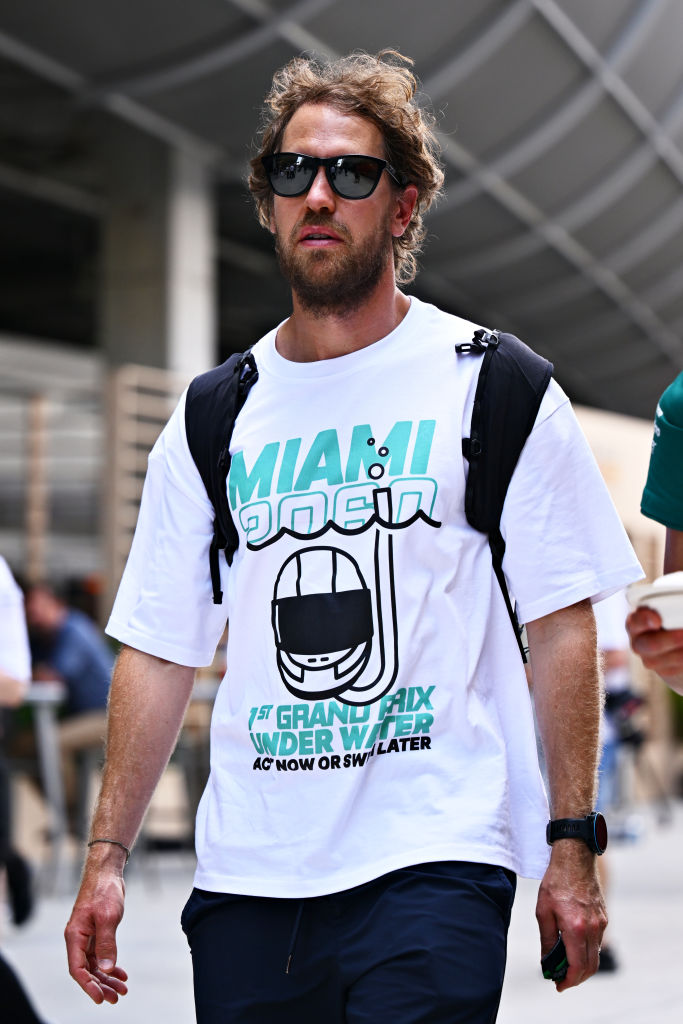 In case that’s difficult to read, the message on Sebastian’s shirt reads:

That’s an ironic message coming from a guy who has literally made hundreds of millions of dollars thanks to one of the most gas-guzzling sports in history.

And it’s not just the F1 cars that spew Carbon Dioxide during the actual races, it’s the enormous F1 machine that operates year-round transporting the cars, racers and fans to exotic locales. It’s also the luxury car industry that is marketed based on the success of cars driving really really really fast.

How many Ferraris, BMWs, Mercedes, Aston Martins and McLarens are sold every year thanks to the mystique created by their respective racing teams and charismatic drivers?.

Enzo Ferrari famously did not actually care about his consumer car business (or his drivers). All he cared about was winning races. And the way he funded his racing division was by selling road cars to rich people.

And believe me, I am not just being a luxury car hater. I love Ferraris. I fell in love with Ferraris at the age of 13 in 1995 while sitting in a movie theater watching Nicolas Cage smash around San Francisco in a Yellow 355 Spider in “The Rock.”

But, I will say that as an adult who is zooming towards his 40th birthday, it does seem extremely silly to go out and buy a car that requires hundreds of dollars a the pump (especially in California) for the privilege of spewing a ton of poisonous gas into the atmosphere so I can feel cool going 85 miles per hour on the freeway… assuming there is no traffic. It makes a lot more sense to me to drive a Tesla, which probably goes just as fast as many gas-powered luxury cars and has much more comfortable amenities.

For the record, I drive a Volvo. A beige one.

All this is to say, I find it pretty hypocritical of Sebastian Vettel to walk around on the back-nine of his career talking about the dangers of climate change after making a bloody fortune thanks to one of the most climate-killing sports ever. That would be like Ray Kroc, the guy who turned McDonald’s into a global empire, spending the last decade of his life complaining about the dangers of eating fast food.

To his credit, Sebastian AGREES that he is a hypocrite. When asked by the BBC about if his climate preaching makes him a hypocrite, Sebastian replied:

“It does, it does and you are right when you laugh because there are questions I ask myself every day. I am not a saint but I am very concerned about the future. It is something I ask myself and traveling the world…

It is my passion to drive a car and I love it, and every time I step in a car I love it, but when I get out of the car I am thinking: ‘is this something we should do, traveling the world and wasting resources?’

On the other hand, we are entertaining people and during Covid-19, we were one of the first sports to start again. When everybody’s heads were about to explode there were F1 races on. In terms of entertainment, there are sports, culture, comedy and a lot of people who could not perform and a lot of people missed that and if we did not have this in general we would probably go mad.

There are things I do because I feel I can do them better. Do I need to take a plane every time? No, not when I can take a car. There are certain things in my control and certain things I cannot control.“

I respect that Sebastian is taking the question head-on, but I’m not quite sure people being bored during COVID lock-downs squares with needing to continue performing an exercise that you know is killing the planet while also turning you into a hypocrite by paying you tens of millions of dollars.

Another analogy would be a mafia hitman realizing after a decades-long career that maybe killing people is perhaps morally wrong… but then continuing to accept money to kill people… because someone’s gotta do it!

Another route centimillionaire Sebastian could take would be to… QUIT. Or demand that he be allowed to race an electric vehicle. Or offer to donate all the money he’s making right now from Formula 1 to climate change charity.

I will end on a positive note. F1 does seem to be taking its climate footprint and sustainability somewhat seriously. F1 is aiming to have a net-zero carbon footprint by 2030. A decent goal, but not sure if that’s acting fast enough to prevent Miami 2060 from being a boat race.

US Rapper DaBaby Buys Popcorn For $100 in Lagos Traffic (Video)

US Rapper DaBaby Buys Popcorn For $100 in Lagos...

Jake Paul vs Mike Tyson fight is not happening, Reason Why?

Fans of the long-running show Jeopardy! have had quite the journey in recent years, but now we're getting...
- Advertisement -

Making that sort of change and bringing to life a new version of an established character also meant reaching...

Why Is Jenny Kleeman Leaving Times Radio, Where Is She Going To Work? Husband & Married Life

Based on the internet, Kenya Moore has small, including...
Celebrity

Marcus Combs who is understood for his comedy and...
Celebrity

Deborah Hutton Melanoma Surgery Condition: Her Hat Photos After Skin Cancer – Health Update In 2022: How Is She Now?

Does Sophie Corcoran’s Have A Husband? Married Life, Age Wikipedia & Net Worth Details

Sophie Corcoran has not indicated her age to the...
Celebrity

Daniel Cameron is married to his wife, Makenze. The...
Celebrity

Jamila Rizvi is an Australian author, presenter, and political...
Celebrity

Zyra Gorecki Lumber Accident: How Did She Lose Her Leg? Wikipedia & Parents – Know Where She Is Now

An examination of the Zyra Gorecki Lumber Accident –...
- Advertisement -

Hulu reportedly took a pass on ‘alternate universe’ series about Hillary Rodham (and Bill Clinton, who she never married) – twitchy.com