Teyana Taylor returned to the music industry after years as the Winner of season seven of The Masked Singer on May 18, 2022. She astonished her fans with her real identity behind the mask of Firefly. 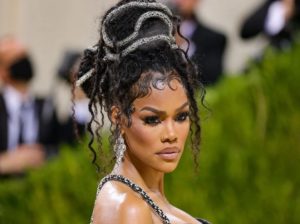 Teyana Taylor is an award-winning singer-songwriter, actress, dancer, choreographer, and model from the United States. She received the BET Awards for video director of the year in 2020 and the MTV Video Music Awards for Best Choreography in 2017.

Teyana began her television career in 2007 with My Super Sweet 16, and has since starred on several series such as Dancing with the Stars, Barkitecture, Complex Con, Saturday Night Live, The Real, and The Hollywood Puppet Show.

Teyana Taylor is a happily married woman who has been married to her beloved husband, Iman Shumpert, for many years. Her husband is a well-known professional basketball player in the United States who won the NBA championship with the Cleveland Cavaliers in 2016.

She has never revealed the specifics of her wedding to the media since she wanted to marry quietly. She gave birth to her first daughter, Iman Tayla Shumpert Jr., in 2015, however she and Iman Shumpert did not marry until October 1, 2016. In addition, she gave birth to her second daughter, Rue Rose Shumpert, in 2020.

She has kept her identity secret throughout the performance in order to demonstrate her talent with her whole heart buried behind the mask. She was Firefly on The Masked Singer, and the audience adored her voice throughout the evening.

People were impatient to learn her true identity throughout the show, and after winning season seven of The Masked Singer on May 18, 2022, she revealed her true identity as the firefly mask. From the judge’s panel, Robin and Jenny McCarthy accurately guessed her identity.

Teyana Taylor Children: She Welcomed Her First Child In 2015

Teyana Taylor has two gorgeous girls from her marriage, therefore she is a mother of two. Her older daughter, who was born in 2015, is now seven years old. Her second daughter, on the other hand, is already two years old.

Teyana also manages the Instagram accounts of her two gorgeous daughters. They are particularly active on Instagram, where they have amassed thousands of followers under the handles @babyruerose and @babyjunie4.

Share
Facebook
Twitter
Pinterest
WhatsApp
Previous articleJoJo Siwa Bought a Cinderella Ring in Honor of Her Disney Night Dance
Next articleJohnny Depp laughed as he held a dog out of a car window, according to Amber Heard’s sister