CRAIG BROWN: Why doesn’t this collection of whodunnits tell us anything about the authors?

Murder By The Seaside: Ten Classic Crime Stories For Summer

How many real murders take place at the seaside? For the past 25 years I have been living in a seaside town in Suffolk.

As far as I am aware, there have been no murders at all during this time, unless, of course, they were so ingenious as to have passed undetected.

In fact, the only crime I can remember occurred back in 2009, when a disgruntled chef from a local hotel vandalised a Ferrari sports car belonging to the flashy pop star Jay Kay. 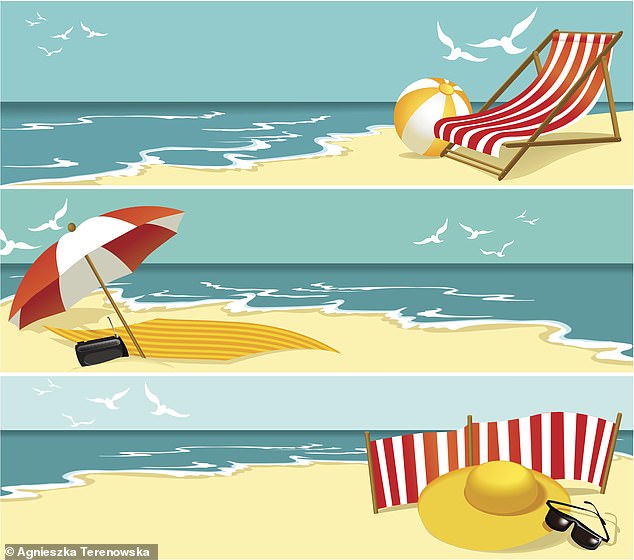 The crimes in Murder By The Seaside, a collection of short stories – some of them vintage to the point of decrepitude – are both more grisly and less fun

In 1996, Thorpeness, just up the coast, hit the headlines – at any rate, the local headlines – after a police chase involving a 90-year-old retired farmer called Leslie Evans.

Police had spotted Mr Evans driving erratically and followed him as he swerved on to the local golf course and kept driving.

At this point, the police commandeered a golf buggy and gave chase, but Mr Evans proved too quick and gave them the slip by the side entrance at the sixth hole. He was arrested the next day at his home in Saxmundham.

The crimes in Murder By The Seaside, a collection of short stories – some of them vintage to the point of decrepitude – are both more grisly and less fun.

Many involve the discovery of a corpse with its head smashed in, generally described with ghoulish relish.

‘There looked up at us, with a most weird and horrible effect, the discoloured face of a man… on the left temple, just behind the eyebrow, was a ragged, shapeless wound such as might have been made by a hammer.’

By and large, these stories are drawn from what is regularly described as the golden age of crime fiction – the two decades between the First and Second World Wars.

Having grown up in Ireland, the author William Trevor recalled reading such tales in his childhood.

‘All over England, it seemed to me, bodies were being discovered by housemaids in libraries. Village poison pens were tirelessly at work. There was murder in Mayfair, on trains, in airships, in Palm Court lounges, between the acts. Golfers stumbled over corpses on fairways. Chief constables awoke to them in their gardens. We had nothing like it in West Cork.’

A century on, most of the stories in this prettily designed paperback have a certain period charm, if not much else.

This makes it all the more disappointing that the publishers have added no background information at all: no date is given for each story, and not a word about the authors.

Yet they were often as interesting as their stories and in many cases more so.

For instance, the author of Razor Edge, Anthony Berkeley (who also wrote as Francis Iles and A. Monmouth Platts), wrote Before The Fact, the novel on which Alfred Hitchcock’s Suspicion was based.

It begins with the arresting paragraph: ‘Some women give birth to murderers, some go to bed with them and some marry them. Lina Aysgarth had lived with her husband for nearly eight years before she realised that she was married to a murderer.’

Another of his novels, Malice Aforethought, involves an outwardly respectable doctor who decides to poison his domineering wife.

It seems that the author based the doctor’s chilly character on himself; even more creepily, he dedicated the book to his domineering ex-wife, whom he divorced a year later.

It strikes me as very interesting that Edmund Crispin, the author of the last story in the book, Man Overboard, also wrote (as Bruce Montgomery) the music for six of the Carry On films, including Carry On Cruising and Carry On Nurse, and that R. Austin Freeman, author of A Mystery Of The Sand-Hills, was a qualified doctor of extreme political views who was fiercely in favour of the forcible sterilisation of socially undesirable people.

So, sadly, the stories are left high and dry, without any historical or authorial context. In Freeman’s case, a word or two on his background would certainly have livened up his contribution: the crime writer Julian Symons described reading his work as ‘like chewing dry straw’.

Any collection is likely to have its ups and downs. For me, the inclusion of a Sherlock Holmes short story in any anthology invariably dwarfs any others.

The moment you read of the figure at Paddington Station ‘pacing up and down the platform, his tall, gaunt figure made even gaunter and taller by his long grey travelling-cloak and close-fitting cloth cap’, you are hooked.

Bizarrely, the Sherlock Holmes short story that kicks off this collection, The Boscombe Valley Mystery, is not set at the seaside at all – a clear breach of the Trade Descriptions Act, but a crime perhaps best left to one of today’s lesser detectives to investigate.

My own suspicion is that the editor of this collection, Cecily Gayford, confused the fictional Boscombe, which is, Dr Watson tells us, near Ross in Herefordshire, with the real Boscombe, a suburb of Bournemouth on the South Coast.

But let’s not get too pernickety, The Boscombe Valley Mystery has everything you might want from a Sherlock Holmes story, including paradoxical ruminations – ‘there is nothing more deceptive than an obvious fact’, a dead body with its head beaten in by repeated blows of some heavy and blunt weapon, and some miraculous detective work by Holmes.

In this case he successfully predicts that the murderer is ‘a tall man, left-handed, limps with the right leg, wears thick-soled shooting boots and a grey cloak, smokes Indian cigars, uses a cigar holder, and carries a blunt penknife’.

Arthur Conan Doyle was brilliant at maintaining the enigma of Holmes through the deft release of new details about his life.

In this particular story, we learn that the great detective once wrote what he describes as ‘a little monograph on the ashes of 140 different varieties of pipe, cigar and cigarette tobacco’.

The second story in the collection, Cyril Hare’s Weight And See, is also set miles from the seaside.

In Battersea, London, an old woman has been killed in her flat by a blow to the back of the head from a blunt instrument, and the bulky Det Insp Mallett of the CID is first to the scene of the crime.

The riddle in this story, as in half the others, is less whodunnit than howdunnit. In this case, the solution involves, among other things, a Heath Robinson electrical bell-push hidden in a dog’s basket.

The next story, Error At Daybreak by John Dickson Carr, involves a human pulse that seems to have stopped when it actually hasn’t.

‘How the dickens can you stop a pulse?’ asks an onlooker. ‘You stop it by means of a small, hard, rubber ball… placed under the armpit,’ replies the detective, Colonel March. ‘The arm is pressed hard against the side; the flow of blood is cut off; and the man is “dead”.’

Reading this passage, I recalled seeing the magician Derren Brown making his own pulse stop live on stage some years ago. Mystery solved! This is how he must have done it!

A fair number of the stories involve the murder of a blackmailer.

In an ingenious Father Brown story, The Absence Of Mr Glass, set – hurrah! – firmly by the seaside in Scarborough, the detective’s creator, the great G. K. Chesterton, observes that blackmail is the most morbid of crimes, ‘because it is a crime concealing a crime; a black plaster on a blacker wound’.

But Edmund Crispin, the author of the final story, Man Overboard, set in Brixham, South Devon, believes the opposite. He suggests that blackmailers are often responsible for uncovering crimes worse than their own.

‘Writers of fiction get very heated and indignant about blackmail,’ observes his detective, Det Insp Humbleby, ‘yet, by and large, it’s always seemed to me personally to be one of the least odious and most socially useful crimes.

To be a blackmailer’s victim you do almost have to be guilty of something or other… I don’t care what novelists say. I like blackmailers. Salt of the earth. Here’s to them.’

Ten Classic Crime Stories For Summer, it says on the cover, and I imagine many people will take this little book to the beach in order to relax in the sun while reading of battered corpses.

And this paradox was at the heart of the golden age of crime writing. The more grisly the tale, the more we enjoy it.

As the late P. D. James once said, these stories ‘deal with violent death and violent emotions but they are novels of escape. We are required to feel no real pity for the victim, no empathy for the murderer, no sympathy for the falsely accused.

‘For whomever the bell tolls, it doesn’t toll for us.’

US Marine celebrates 100th birthday in mourning of the lost country he fought for during WWII U.S. Marine Carl Spurlin...

A mother has issued a desperate appeal for information after her 19-year-old daughter vanished without a trace three days...

2 Killed, 3 Cops Wounded In Texas By Suspect With Assault-Style Rifle And ‘Battle Belt’

Two people were killed and four others wounded —...
- Advertisement -