NYC Mayor Eric Adams has complained his official residence Gracie Mansion is haunted while moaning that the storied Manhattan property isn’t ‘cool enough’ for him or his family.

Adams, 61, made the supernatural claim on the YES network Tuesday, with his comments first reported by Upper East Site.

He spoke with announcers Michael Kay and Cameron Maybin shortly after pitching the first ball of the game between the Yankees and Toronto Blue Jays.

‘I know the mayor of New York lives in Gracie Mansion. That doesn’t seem cool enough for you,’ announcer Michael Kay began.

‘No, it’s not. Trust me. Trust me,’ Mayor Adams answered. ‘And I don’t care what anyone says, there are ghosts in there, man.’

‘We just had a conversation about ghosts yesterday,’ co-host Cameron Maybin then says.

He continued: ‘I’ve been in some haunted buildings in my life. I’m not interested in revisiting those.’

Kay, the game’s main commentator, went on to quiz the mayor on whether he’s ever heard a ghost wandering around the Upper East Side mansion, where he’s lived since taking office in January.

‘You hear footsteps and all types of stuff?’ Maybin then asked. 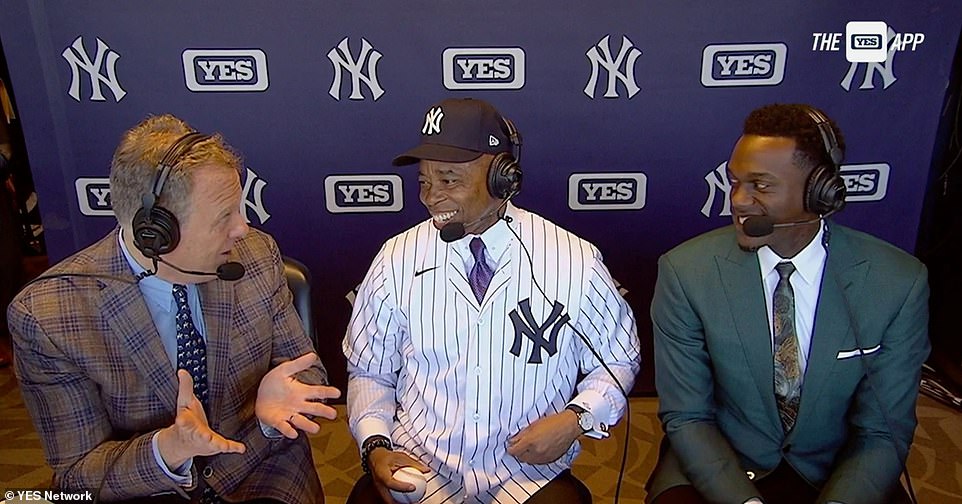 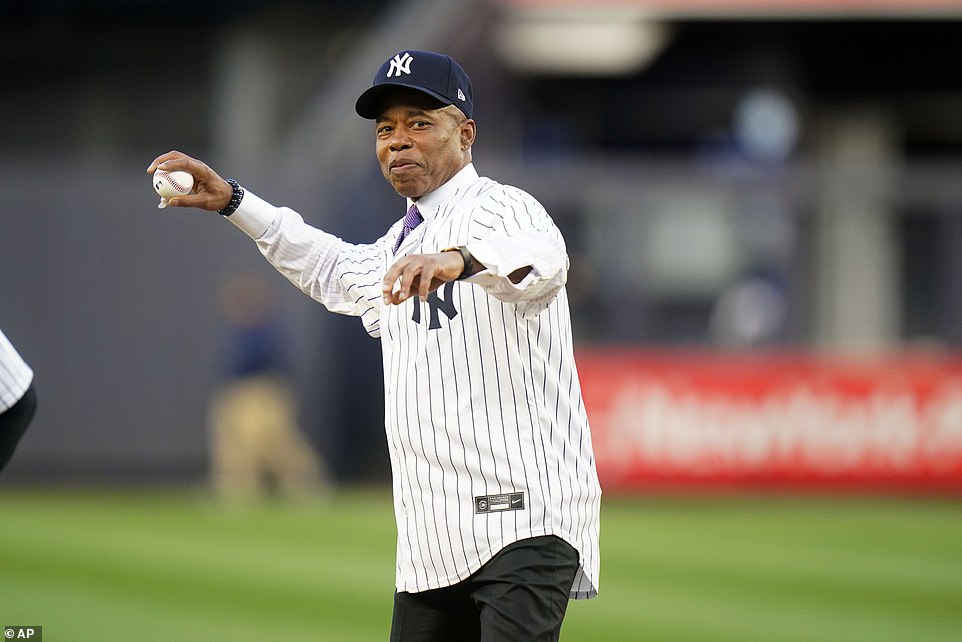 Adams said ghosts have been ‘creeping around’ Gracie Mansion since he took over the home from Bill de Blasio on January 1, 2002. Pictured: Adams throwing the first pitch on Tuesday before the state of the MLB game between the New York Yankees and the Toronto Blue Jays 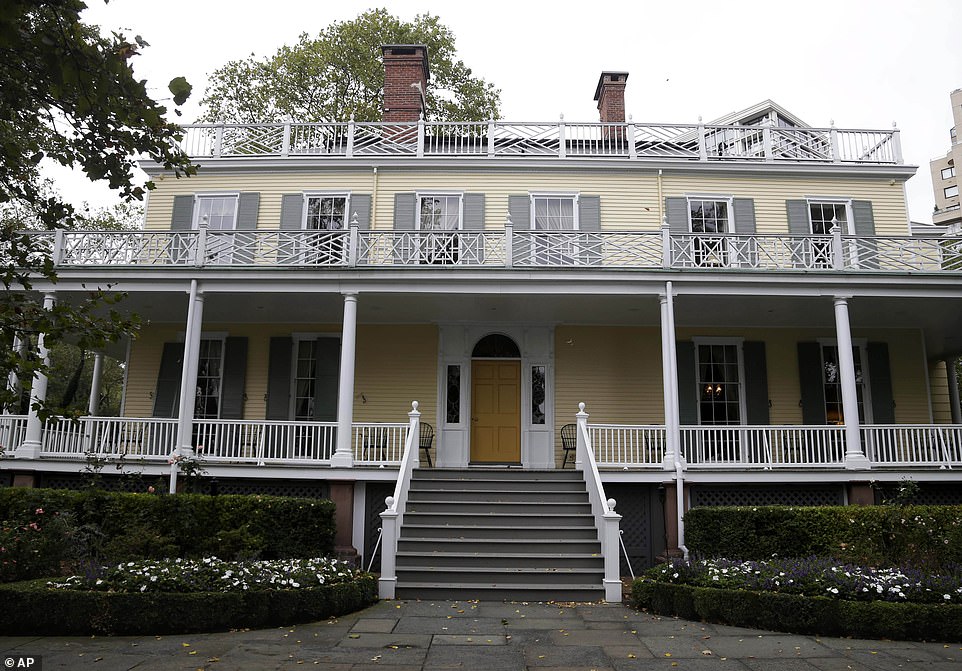 Gracie Mansion is the official residence of the Mayor of New York City. Completed in 1799, it is located in Carl Schurz Park, at East End Avenue and 88th Street in the Yorkville neighborhood of Manhattan 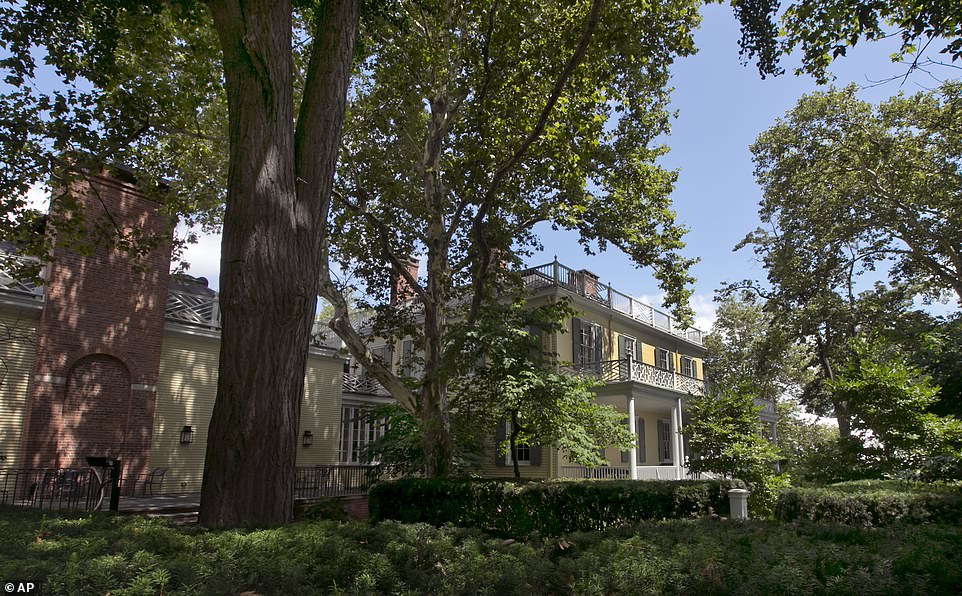 Asked if it was cool to live there, Adams said of the matter: ‘No, it’s not. Trust me. Trust me,’ before adding: ‘And I don’t care what anyone says, there are ghosts in there, man’ 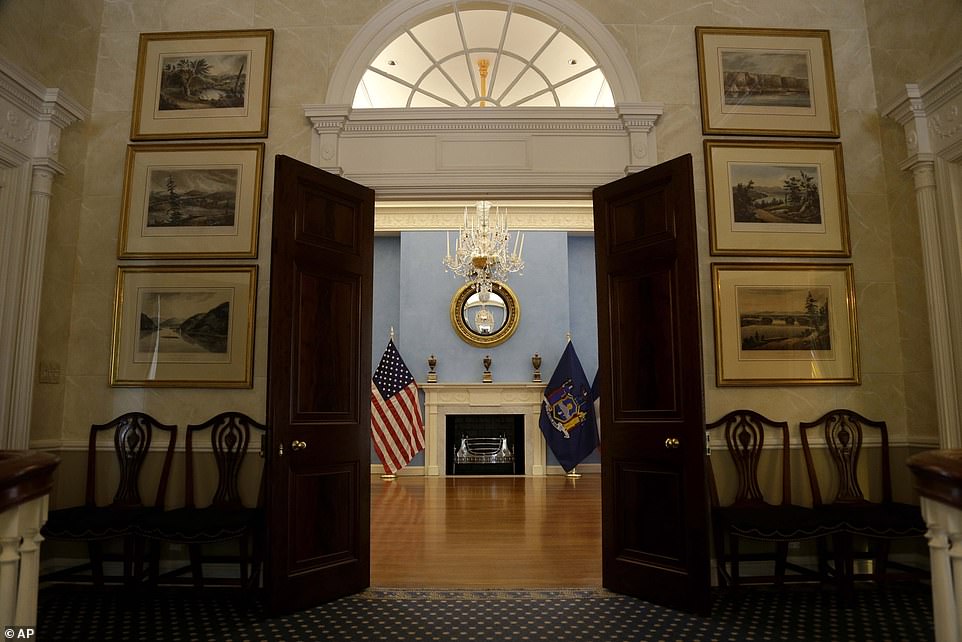 An interior room at Gracie Mansion, the mayor’s official residence since 1942, except between 2002-2013, when Michael Bloomberg was the NYC mayor 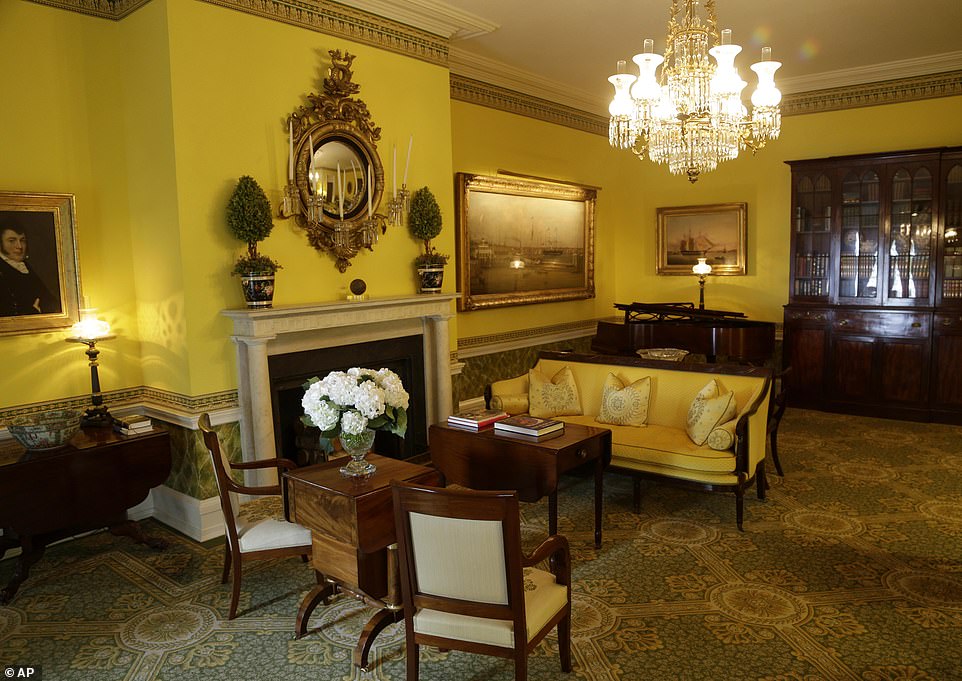 ‘All the time, man. All the time,’ Mayor Adams said in reaction to being asked if he hears ghosts walking around the traditional residence 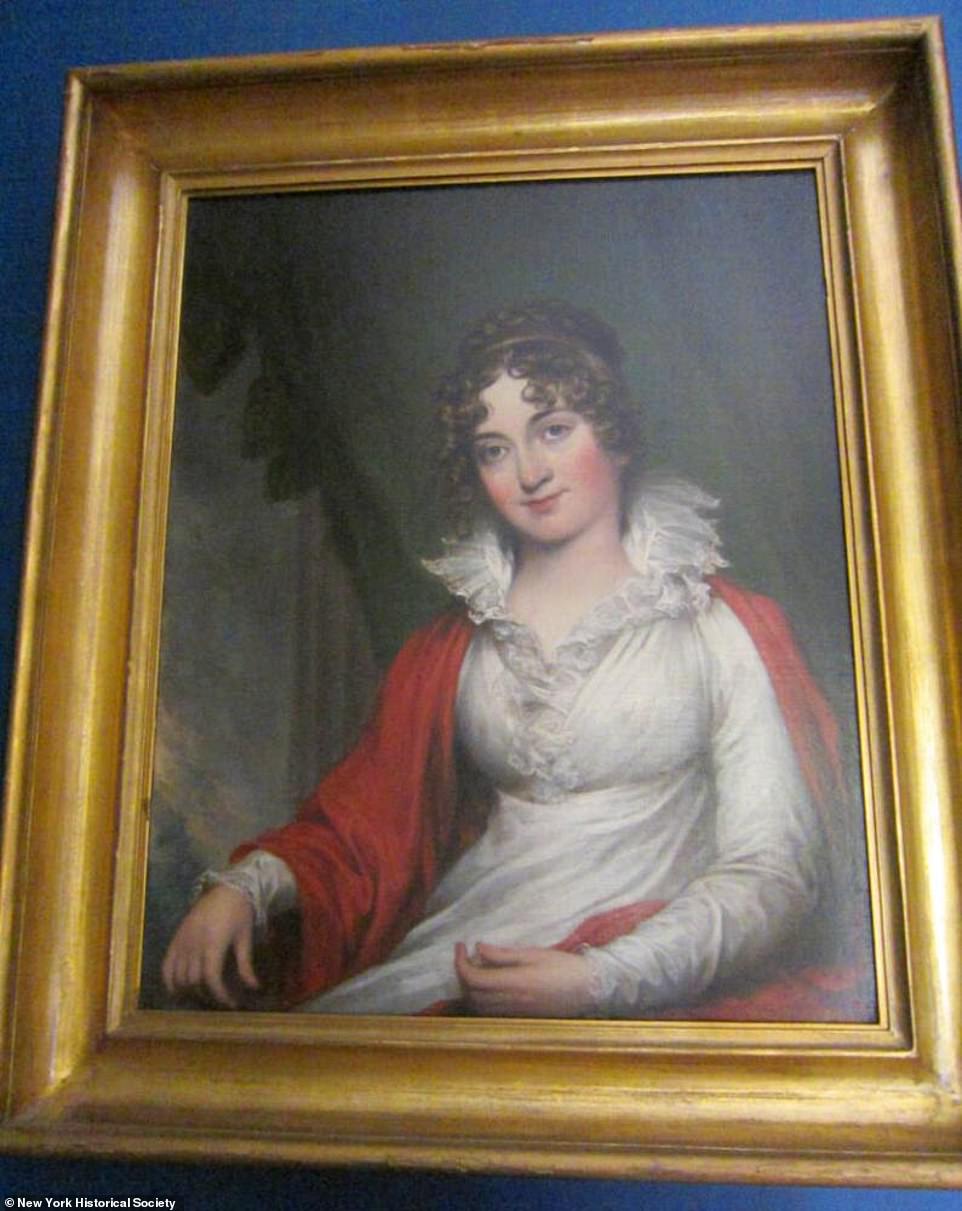 The daughter-in-law of the Gracie Mansion’s architect – Archibald Gracie – died of apoplexy at the home in 1819 and her ghost is rumored to be moving around the house.  Pictured: Elizabeth Stoughton Wolcott-Gracie, who lived between 1795 and 1819 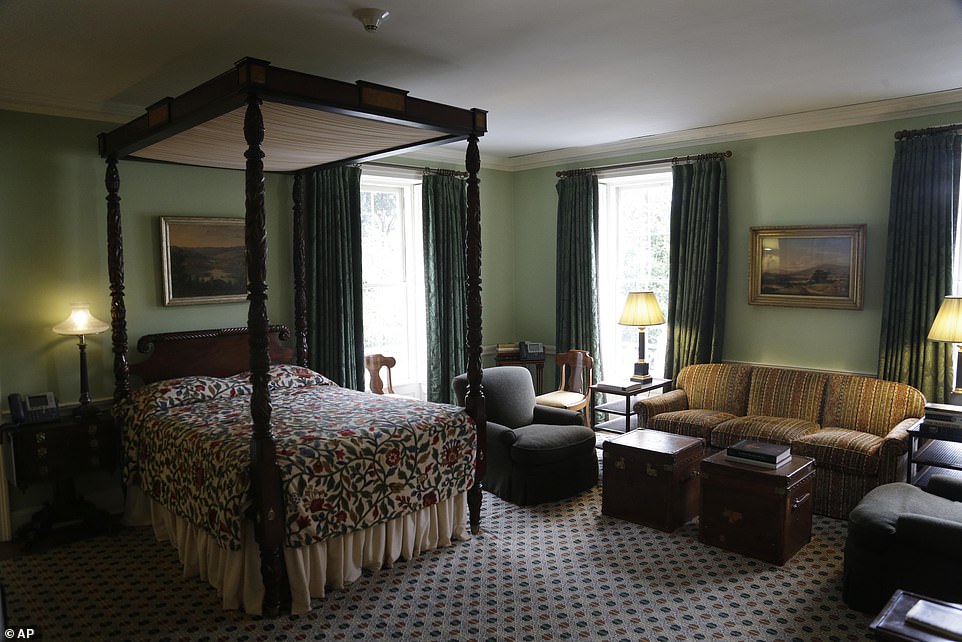 The master bedroom in Gracie Mansion, where Adams and his family live since the beginning of the year after being elected as the new mayor in 2021 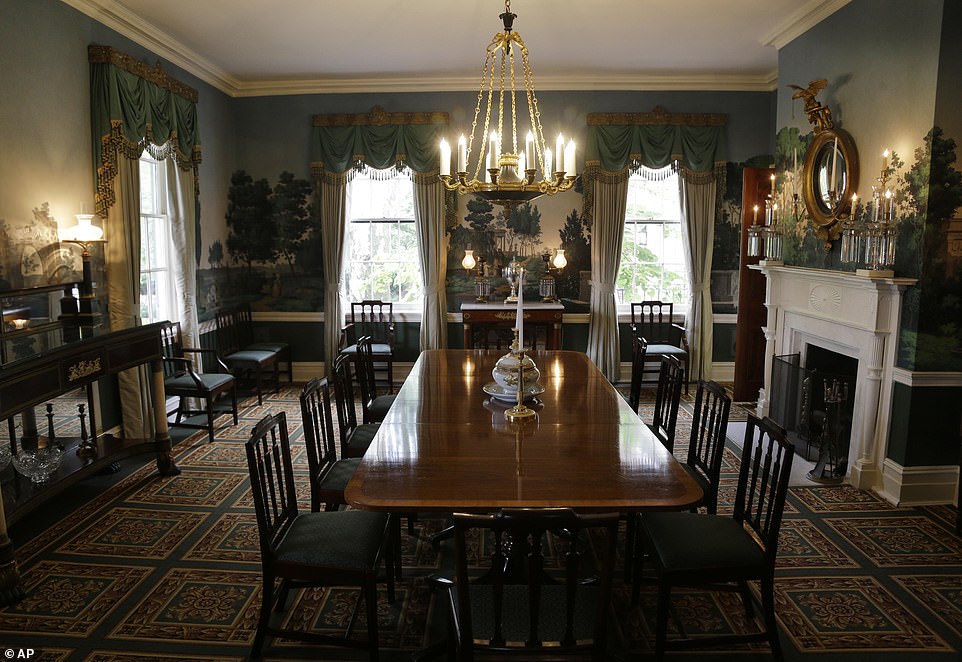 The dining room at at the five-bedroom residence, built at the end of the 18th century and seized by the government in 1899

One spooky tale frequently told about the 223-year-old mansion is that its haunted by Elizabeth Walcott-Gracie.

She is the daughter-in-law of the home’s architect, Archibald Gracie and died at the residence in 1819 from apoplexy.

Chirlane McCray, wife of former NYC mayor Bill de Blasio, said during an interview with Metro US in 2017 that she never saw the woman’s ghost.

But McCray added that ‘there are times when doors open and close by themselves and the floorboards creak as though someone is walking through the rooms.’

Gracie Mansion was initially built in 1799 as a country home overlooking Hells Gate channel along the East River, a couple of miles above what was then considered the New York City’s northern edge.

The house was then seized by the government in 1896 after a few families lived in the household. It was incorporated into Carl Schurz Park and is now one of the few attractions in the neighborhood of Yorkville in the Upper East Side. 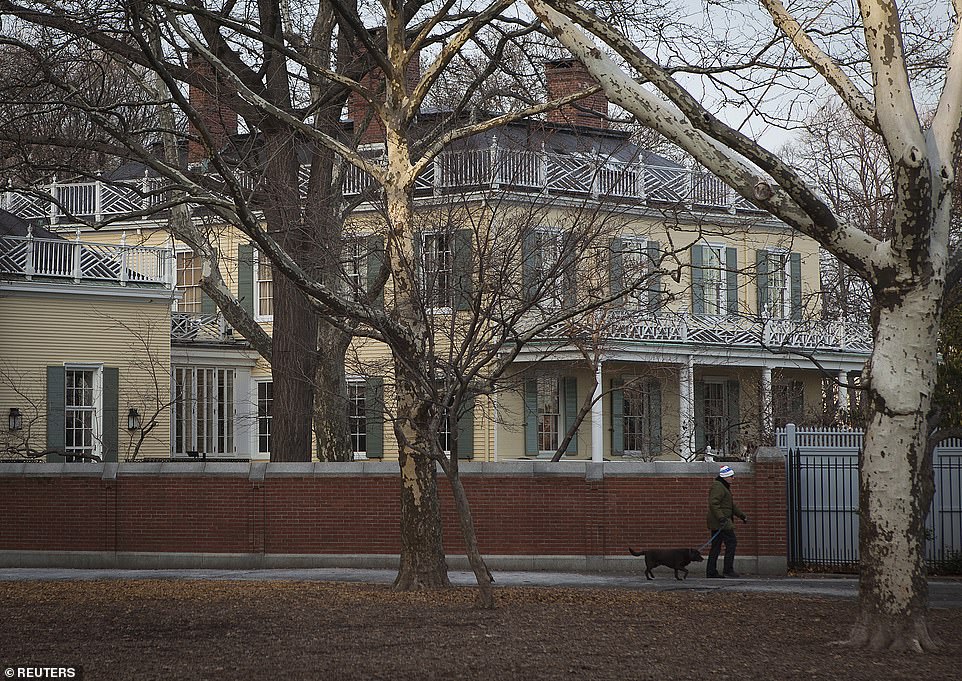 The 214-year-old mansion in Schultz Park has served as the official residence for New York City mayors since the middle of World War Two (1942), overlooking the East River

No city public figure lived at Gracie Mansion after Rudy Giuliani left office in 2001 until 2013. Mayor Michael Bloomberg remained in his lavish Upper East Side town house during his 12-year administration between 2002 and 2013, although he did use the mansion for meetings and renovated it, before Bill de Blasio took office.

Its main two floors are open to the public on a limited basis for guided tours and serve as a small museum.

The residence was added to the National Register of Historic Places in 1975.