Frank Furedi: The reaction to the attempted murder of Salman Rushdie is astonishing

The most shocking thing about Friday’s attack on Sir Salman Rushdie is not that it happened in the first place. The author had, after all, spent much of his life with a bounty on his head – a burden he bore with bravery and resilience.

No, what has astonished me is the reaction in some quarters to the attempted murder of a blameless novelist – especially from the Left.

Yesterday morning, absurdly, a BBC Radio 4 news bulletin was claiming that ‘no motive has yet been established’ for the crime.

The website of The Guardian newspaper, equally unwilling to look the facts in the face, was quick to reassure its readers that a motive for the savagery ‘appears to be unclear’.

Rank absurdity. The attacker’s apparent sympathy for Iran’s Islamic Revolutionary Guard and Shia extremism was by then obvious to anyone with an internet connection. 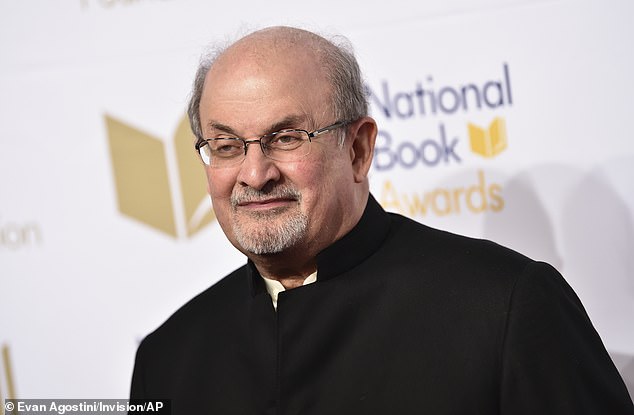 The most shocking thing about Friday’s attack on Sir Salman Rushdie is not that it happened in the first place. The author had, after all, spent much of his life with a bounty on his head – a burden he bore with bravery and resilience. Pictured: Rushdie in 2017

Iran’s newspapers, moreover, were in no doubt what to think about it, one saying: ‘A thousand bravos… to the brave and dutiful person who attacked the apostate and evil Salman Rushdie… The hand of the man who tore the neck of God’s enemy must be kissed.’

But the Left, as ever, seemed unwilling to admit the obvious – even as JK Rowling, was chillingly being told ‘you’re next’ by a Pakistani ‘political activist’ after she dared to express solidarity with her fellow novelist.

Well, as Winston Churchill is often misquoted saying, up with this I will not put.

It is time for those of us who believe in free speech, in liberalism and in democracy to stand up and say so.

Because the world is dividing on clear lines: those who recognise the value of these things, and those who do not.

This crisis has, alas, been getting worse, not better. When the ‘Rushdie affair’ broke in 1989, the ‘fatwa’ imposed by Iran’s Ayatollah Khomeini – over a book the cleric had not even read – provoked shock and anger across the West. 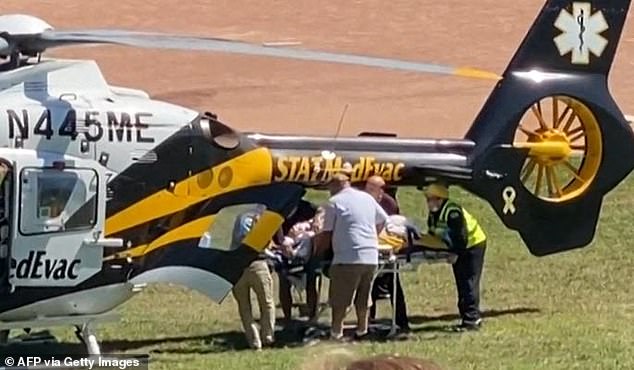 No, what has astonished me is the reaction in some quarters to the attempted murder of a blameless novelist – especially from the Left. PIctured: Rushdie being airlifted to hospital after the attack

The Western world rallied to Rushdie’s defence: Iran and Britain broke off diplomatic relations, and a host of leading cultural and political figures worldwide offered the author private and public support.

Fast forward to today and how things have changed. ‘Our’ side is in the grip of a climate of intolerance that is growing daily.

The Left, as I say, are squeamish about stating plainly what the rest of us can see with our own eyes. For too long, they have appeased and pandered to the extremists.

As recently as 2019, a columnist for the Left-wing Independent newspaper (who also hadn’t read the book) wrote: ‘I wouldn’t have it in my house, out of respect to Muslim people and contempt for Rushdie… I’d be quite inclined to burn it.’

Indeed, it is hard to imagine Sir Salman’s novel The Satanic Verses being considered for publication now. 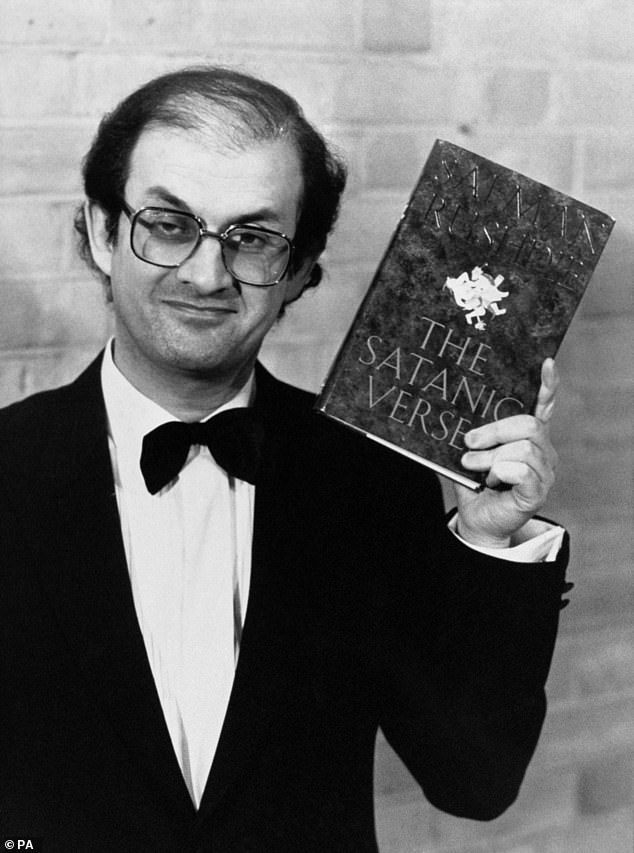 Indeed, it is hard to imagine Sir Salman’s novel The Satanic Verses being considered for publication now (pictured is Rushdie with the novel in 1989)

But this is not merely about a debate between Western authors and Islamist fundamentalists. Intolerance and illiberalism now characterise the public square in Britain and across the ‘free’ world.

After all, JK Rowling faces death threats not just from Islamists – but, in a horrible irony given how dissimilar the two groups are, frequently from trans-rights extremists, too.

And just as it took Twitter 13 hours to remove the death threat aimed at Rowling from the religious fanatics, very often the social media site betrays a shocking unwillingness to delete those threats.

We have got to get a grip.

It is more than a year since a teacher at Batley Grammar in West Yorkshire was forced into hiding by an angry mob at the school gates.

This teacher committed the transgression of provoking a discussion among his pupils: in a religious studies lesson, he showed a drawing of the Prophet Muhammad, a ‘blasphemy’ that many Muslims abhor.

Some people might disagree with his decision, but free speech does not require universal agreement: that’s the point.

Few are the politicians who have defended this teacher or dared criticise those who left him in fear for his life.

If we accept that Britain is now a place where certain topics cannot be freely discussed, then we have lost one of the foundation stones of our democracy.

As an academic, I have watched in despair as the ability to speak freely has been steadily eroded. When I was a young man in the 1960s, thought flourished in Britain’s universities. We could say almost anything, debate any view, challenge any orthodoxy. 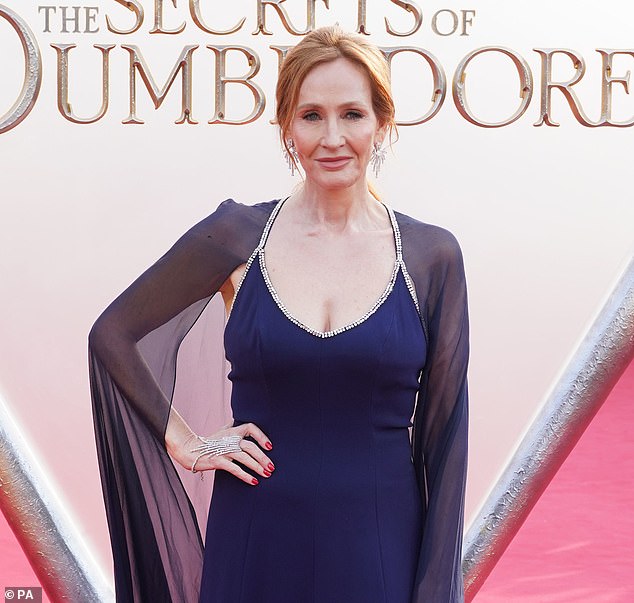 After all, JK Rowling (pictured) faces death threats not just from Islamists – but, in a horrible irony given how dissimilar the two groups are, frequently from trans-rights extremists, too.

No longer. Today, if a professor wants a lively conversation, he can go to the pub among trusted friends – but he must exercise great caution in the lecture hall.

‘Wrongthink’ is ruthlessly policed and legion are the tales of transgressors suspended by authorities and barracked on the college lawn by placard-waving mobs.

Students who once insisted on the right to think for themselves now demand to hear only what has been approved by ‘correct’ Leftist thinking.

The ramifications are immense. Colleagues tell me they see some students, for instance, frozen with fear in historical discussions of the Holocaust. All they want is to be told the ‘right’ viewpoint – the one that gives no offence.

Shamefully, the universities are complicit in all this. Yesterday, it emerged that four out of ten British teenagers were rejected this year by top universities, their places given instead to overseas students who pay higher fees.

With our elite institutions ever more reliant on this money, little wonder if they feel pressure to tailor their courses and remove any potential sources of upset to keep their customers happy.

Applications this summer from Chinese students are also up 10 per cent. This will probably stifle discussion about Taiwanese and Tibetan sovereignty, and the genocide of China’s Muslim Uighur population. Such subjects will be barred – exactly what Beijing wants.

Such regimes abhor free speech. We must not follow their lead. The sickening attack on Sir Salman Rushdie and the poisonous threats to JK Rowling are proof of that.

Frank Furedi is a professor of sociology and the author of 100 Years Of Identity Crisis: Culture War Over Socialisation.

A former Singaporean lawyer who was on the run for 15 years has been arrested, according to a press...

Defiant Kwasi Kwarteng today vowed to push on with more tax cuts despite the nervous market reaction to his...
- Advertisement -

An Idaho chiropractor was arrested...
Crime

12-Year-Old Texas Girl Shoots Dad, Herself After Plotting With Another Girl To Kill Their Families and Run Away – Crime Online

The other girl, now charged with criminal conspiracy, didn’t...
Crime

Months after a fatal parasailing...
Crime

A 17-year-old boy from Oxfordshire in England has been...
Crime

Dad Shoots 3 Family Members, Barricades Himself Inside House AND SETS IT ON FIRE – Crime Online

The cousin of one of Jeffrey Dahmer's victims said...
Crime

A Washington state mother will...
Crime

A woman in Ohio is...
Crime

A young Texas girl was...
Crime

The boyfriend of murdered Georgia...
- Advertisement -