A New York City man who spent 23 years behind bars for a 1996 murder he did not commit will be given $7million by the city after his conviction was vacated.

Grant Williams, now 51, was sentenced to 25 years to life for the slaying of Shdell Lewis, 28, in Long Island.

He maintained his innocence for more than two decades and was finally exonerated earlier this month after a 2017 probe by District Attorney Michael E. McMahon’s Conviction Integrity Review Unit revealed stunning new evidence pointing out he was not their guy.

On Monday, Comptroller Brad Lander told DailyMail.com: ‘Grant Williams spent 23 years in jail for a crime that he did not commit.

‘While no amount of money can bring those years back for Mr. Williams or his family, I am pleased that we were able to move quickly to a fair and early resolution of this claim.’

Williams’ lawyer, Irving Cohen, added that the city ‘did the right thing’ by settling quickly.

He said: ‘This will assist him in going forward and trying to get back on his feet,’ and finally putting the ordeal behind him.

He added the state recently settled a separate claim from Williams for $5 million. A message inquiring about the matter was left for state officials.

One of Williams friends, who stood by his side as he maintained his innocence, was Ghostface Killah, formerly a member of the Wu-Tang Clan.

After Thursday’s decision, Ghostface Killah said he felt ‘like a ton of bricks being lifted,’ Staten Island Live reported.

Williams case is the first successful wrongful conviction case on Staten Island, according to Lander’s office. 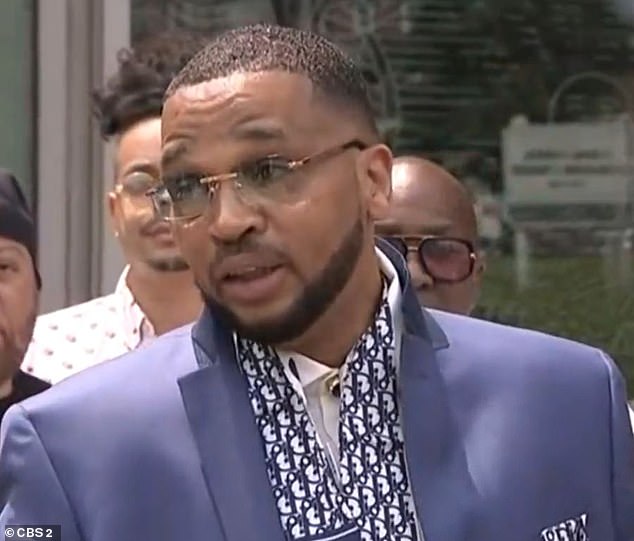 Grant Williams, now 51, was sentenced to 25 years to life for the 1996 slaying of Shdell Lewis. Williams was 25 years old at the time of his conviction 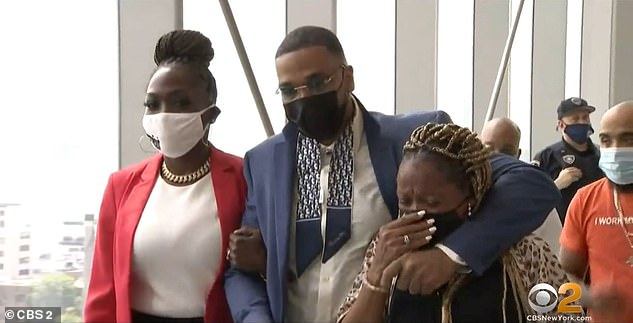 Grant Williams walks out of court with his family. An emotional day for the 51-year-old who will now get to live out the rest of his life as a free man. It would be the first successful wrongful conviction case on Staten Island 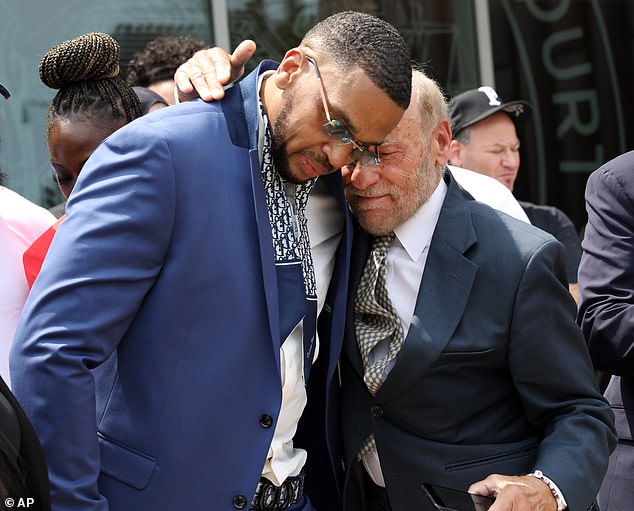 Williams attorney, Irving Cohen, pictured right, hugs his client, Grant Williams after the news of his murder conviction is vacated July 22, 2021, in New York. New York City has agreed to pay $7 million to Williams who spent 23 years behind bars for a murder he didn’t commit, Comptroller Brad Lander said Monday, May 23, 2022

Williams was convicted in 1997, despite the fact that he did not match the description given to police by witnesses, and that prosecutors did not have a confession, a murder weapon, or any significant evidence, Lander said.

Lander explained that police had ignored a witness who told them that Williams was not the shooter. They did not make a record of that interview or share it with prosecutors before they indicted him.

‘Mr. Williams always maintained his innocence and appealed his conviction through the courts for many years,’ Lander said.

The investigation was reopened in 2017, after newly obtained evidence was presented to the Richmond County District Attorney’s Office. The new evidence included credible witnesses who testified Williams was innocent, and uncovered the procedures used by police in the case did not meet modern investigative standards.

Lewis, the 20-year-old victim has been gunned down around 6 p.m. on April 5, 1996 in front of the Stapleton Houses where he lived on Staten Island. He had been walking with a friend when the gunman opened fire. He was transported to the hospital but died there shortly after.

Prosecutors at his trial also sought to suggest a connection between Williams and a baseball cap that the shooter dropped at the scene.

The hat that was left at the crime scene was never tested for DNA that may have pointed to its wearer. One of the distinct features of the hat had a logo on it with the words: Wu-Tang Clan.

During the time of his arrest, Williams had worked at the Staten Island studio of rap group, Wu-Tang Clan. Williams lawyer noted that there was no telling how many hometown fans might have had Wu-Tang Clan hats at the time.

No physical, forensic or digital evidence tied Williams to the crime, and some witnesses testified that he wasn’t the gunman.

Another eyewitness, a friend of the victim’s, had also told investigators that Williams wasn’t the gunman. But police didn’t tell prosecutors about it until after he was indicted, and that witness didn’t testify at the trial.

In 2017, after nearly twenty years of  Williams trying to appeal his conviction but was unsuccessful, Staten Island District Attorney Michael McMahon’s office agreed to review his case.

‘A reinvestigation of this case by my office’s Conviction Integrity Review Unit uncovered new evidence showing Mr. Grant Williams could not have committed the murder a Staten Island jury convicted him of carrying out in 1997,’ said McMahon, Staten Island Live reported.

‘Given the overwhelming amount of exculpatory evidence presented for the first time in this review, as well as a totality of the investigative circumstances in this case, which in several instances defy what we now accept as best practices, we now believe Mr. Williams to actually be innocent and conclude that our justice system failed him.’ 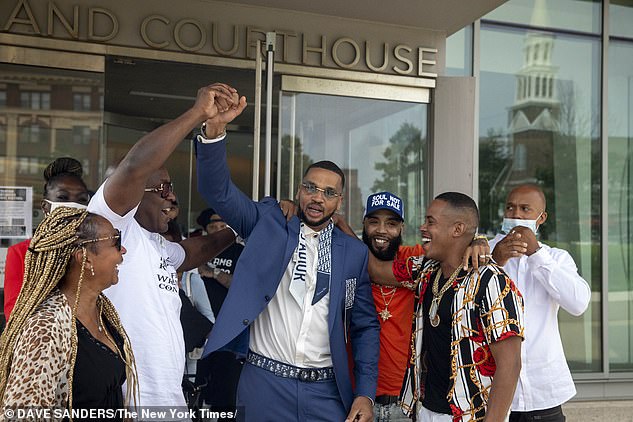 Grant Williams, 51, pictured in center wearing a blue suit as he walks out of the Staten Island courthouse in triumph. ‘I’m a happy man,’ he Williams said as he left the Staten Island Courthouse. ‘I’m happy to be free.’Williams, who thanked his lawyer, friends and family — including his wife of 11 years, Keeva Williams — for their support throughout his ordeal, said, ‘There’s a lot of joy in my heart right now.’ Williams told the reporters outside the courtroom that he never lost faith that he would be exonerated and used to tell other inmates they’d see it on the news someday. ‘And today is that day,’ he said with relatives, supporters and friends including Wu-Tang member Ghostface Killah by his side 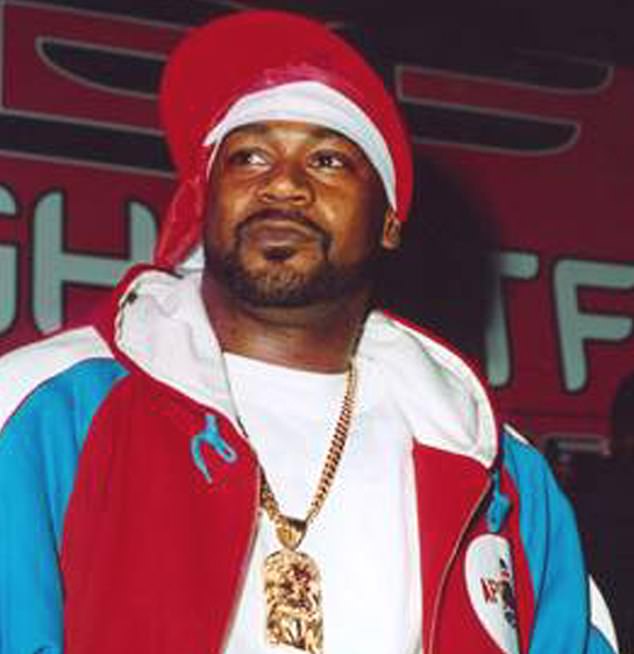 An undated photo of Ghostface Killah, also known as Dennis Coles. The rapper and member of the Wu-Tang Clan, who went on to pursue solo career with Ironman in 1996. He stood by his friend, Grant Williams, who maintained his innocence for more than two decades

On October 15, 2019 Williams was granted parole. And, on July 22, 2021, the Supreme Court, Richmond County vacated Williams’ conviction and dismissed the indictment.

Williams’ mother, Cynthia Franklin, was noticeably emotional in the courtroom as she hugged her grandson, Antoine Morton, 30, who came from Virginia to see his father’s charges wiped clean, the Associated Press reported.

When the judge vacated the sentence, Williams clapped and hugged his lawyer as the courtroom burst into applause.

‘I’m a happy man,’ Williams said as he left the Staten Island Courthouse. ‘I’m happy to be free.’

Williams, who thanked his lawyer, friends and family — including his wife of 11 years, Keeva Williams — for their support throughout his ordeal, said: ‘There’s a lot of joy in my heart right now.’

Williams told the reporters outside the courtroom that he never lost faith that he would be exonerated and used to tell other inmates they’d see it on the news someday.

‘And today is that day,’ he said with relatives, supporters and friends including Wu-Tang member Ghostface Killah by his side.

Cohen described his client as ‘very resilient.’  He said during his time behind bars, Williams earned an associate’s degree and hopes to help others who are wrongfully imprisoned.

23 years of suffering: How Grant Williams languished in prison despite being innocent for 1996 shooting

Shdell Lewis, 20, gets gunned down outside of the Shelton Houses in Staten Island while walking with a friend. He was transported to the hospital but died shortly after

Later that day, Grant Williams, who was 25 at the time, was identified by police as the shooter and arrested for the murder of Lewis

Williams had been working at the Staten Island studio of multiplatinum-selling rap group, Wu-Tang Clan during this period

There was never any significant evidence to prove that Williams was the gunman. There was no physical, forensic or digital evidence that tied him to the crime

The hat that was found at the crime scene was never tested for DNA that may have pointed to the real suspect. Two eyewitnesses testified that Williams wasn’t the gunman. One was a police officer who chased the gunman, and initially gave a description that didn’t match Williams

The district attorney’s reinvestigation found that the police had ignored the witness who told them that Williams was not the shooter, neither making a record of that interview

A Georgia baby has died...
Crime

An Alabama sheriff’s deputy has...
Crime

A gang of alleged Afghan people smugglers including a...
- Advertisement -