He has spent most of his life in front of the cameras – usually with his mother at his side.

But now, it seems, there’s a new woman making a splash in Damian Hurley’s life.

For the model was pictured enjoying a romantic break in Italy with artist Millie Griffiths.

The pair struggled to keep their hands to themselves as they laughed and hugged in the fishing resort of Portofino. 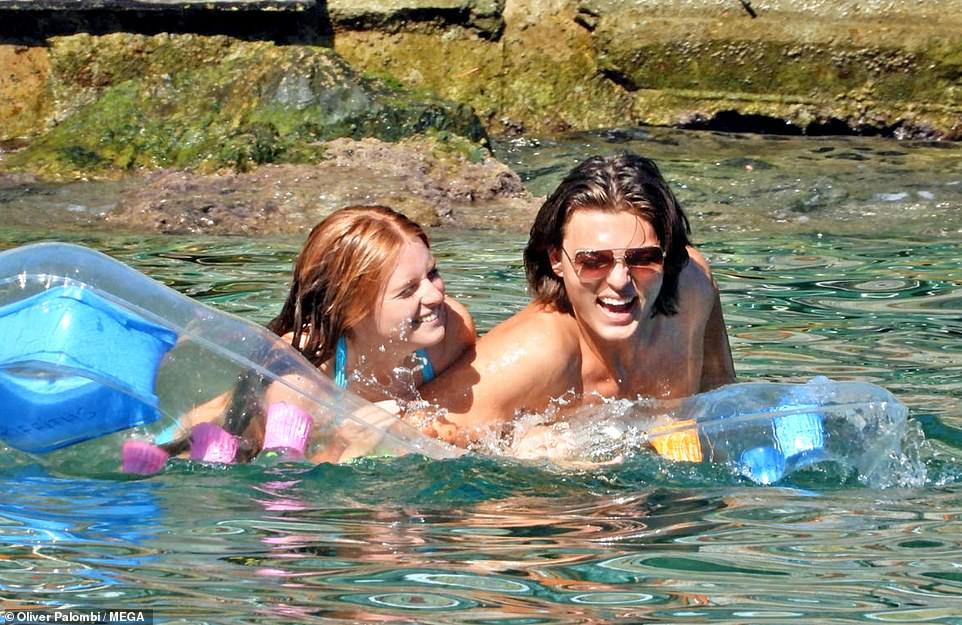 Loved-up: Damian Hurley, 20, looked smitten on Saturday as he enjoyed some quality time with artist Millie Griffiths, 20, in Portofino, Italy

And the 20-year-olds – who were in the village to celebrate the wedding of Millie’s relative – made the most of the summer weather as they floated on a lilo off the coast.

Millie was later spotted shopping with a bag from the Italian boutique Antica Sartoria and smoking a cigarette as they took in the sights.

Sources say the pair – who attended the £37,000-a-year Wellington College together – were ‘close’ throughout school and are now an item, having become ‘pretty much inseparable’.

Hurley – the son of model Liz Hurley and late businessman Steve Bing – also has an affectionate nickname for Millie, calling her ‘Baba ganoush’ after the Mediterranean appetizer. One friend told the Daily Mail: ‘They are super close and friendly. The bond there is real.’ 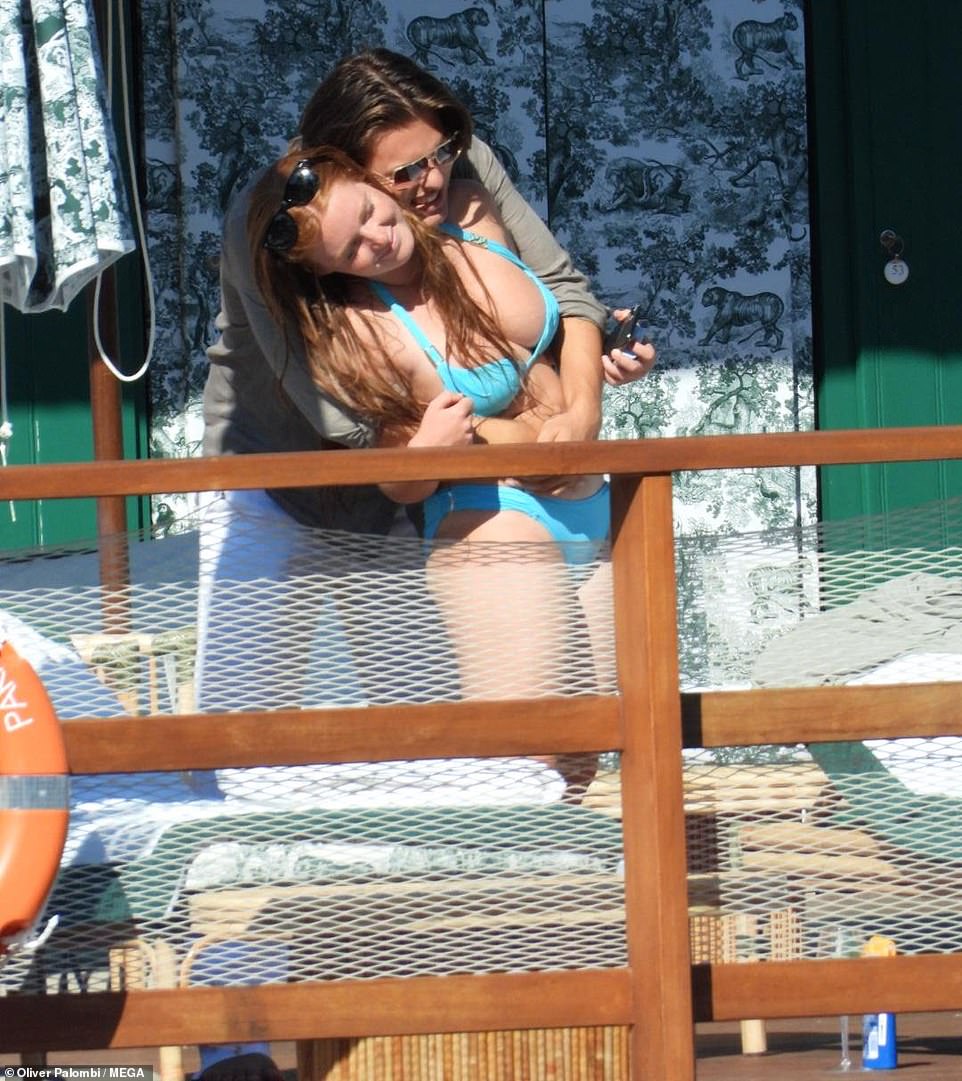 PDA: Sources say the pair were ‘close’ throughout school and are now an item 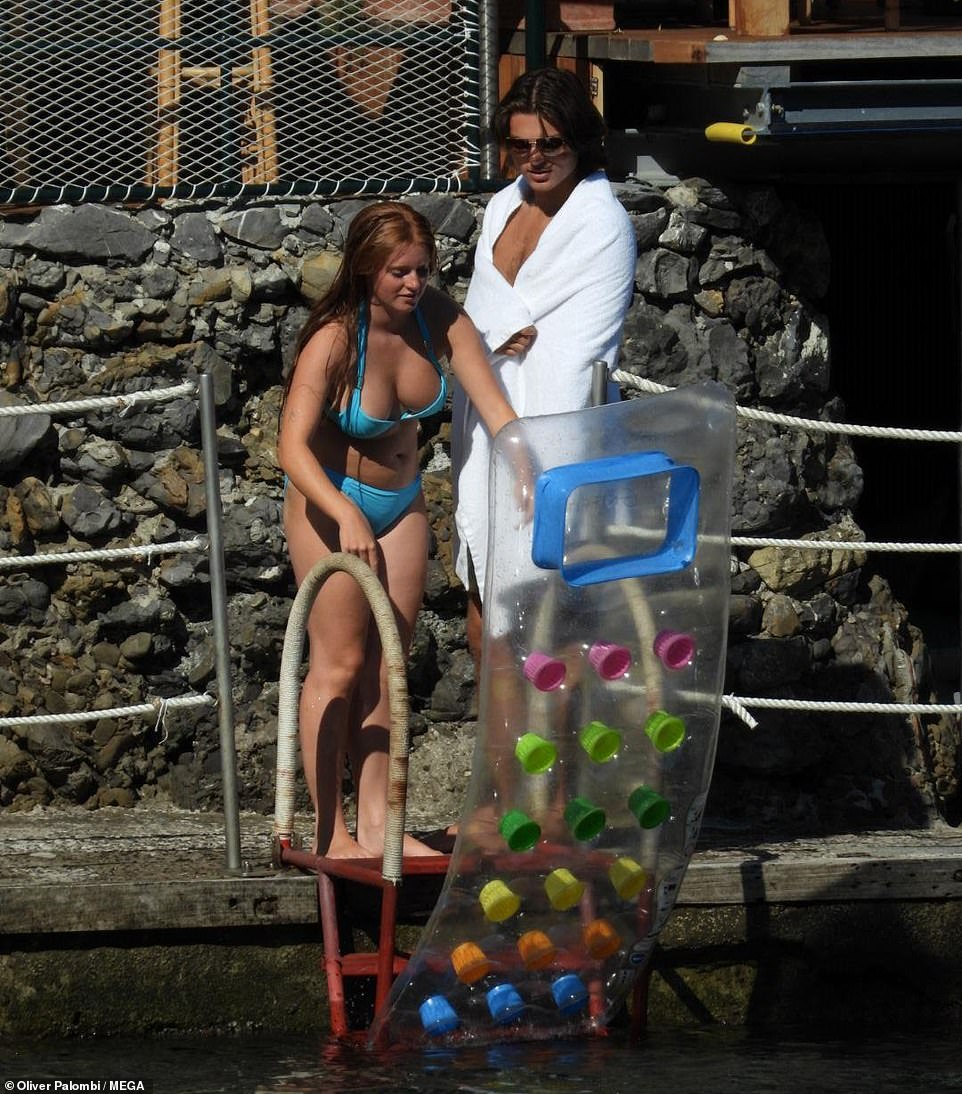 Stunning: Millie Griffiths wowed in a bright blue bikini while her auburn locks fell straight to her shoulders 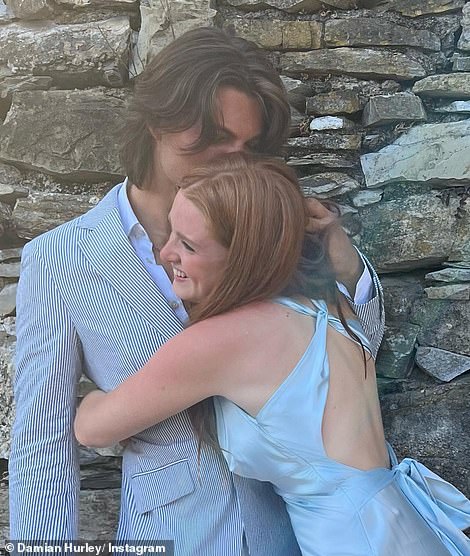 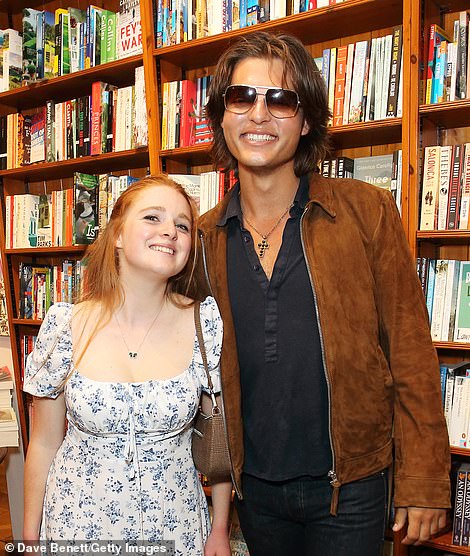 Dynamic duo: Last week Hurley posted a photograph of himself snuggling up to Millie (left), which he captioned with a heart emoji, the pair are pictured right in June 2022

Last week Hurley posted a photograph of himself snuggling up to Miss Griffiths, which he captioned with a heart emoji.

Since leaving the independent Berkshire school two years ago, Millie has carved out a career as an artist. Meanwhile, Hurley has followed in his mother’s footsteps, becoming one of the most sought after male models in the UK.

He is signed to the London arm of IMG Models, which also represents US sisters Bella and Gigi Hadid, Brazilian supermodel Gisele Bundchen and Christie Blinkley.

Hurley’s father Bing took his own life in 2020, prompting his grandfather Dr Peter Bing to launch a bitter court appeal which saw Hurley removed from accessing the fortune.

Reacting to the outcome, 90s fashion muse Miss Hurley said: ‘When Stephen took his own life, he died thinking his children were going to be taken care of. What Stephen wanted has now been callously reversed. I know Stephen would have been devastated.’ 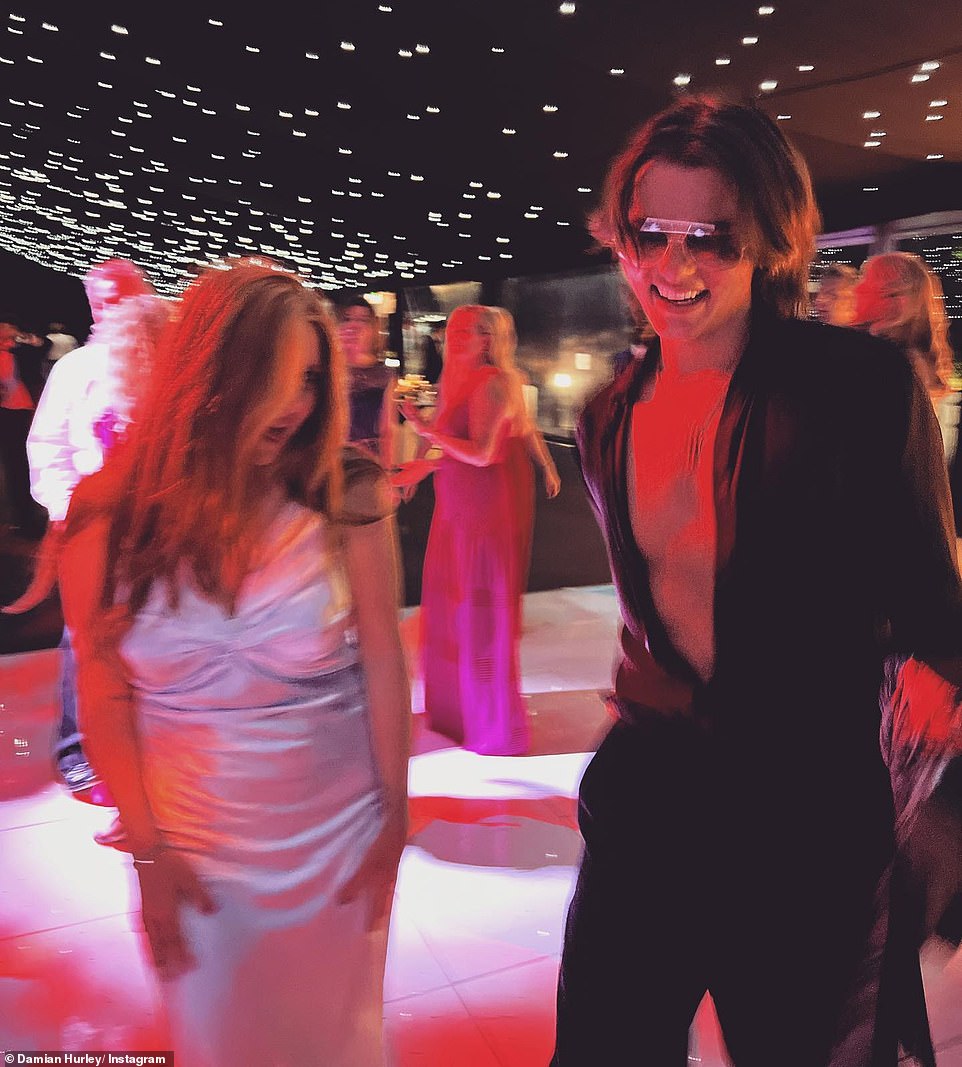 Close: Hurley – the son of model Liz Hurley and late businessman Steve Bing – also has an affectionate nickname for Miss Griffiths, calling her ‘Baba ganoush’ after the Mediterranean appetizer 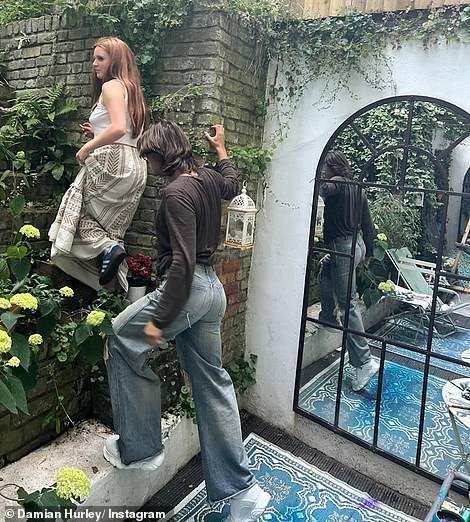 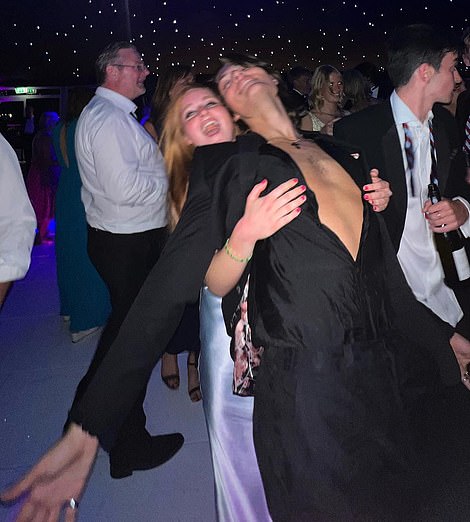 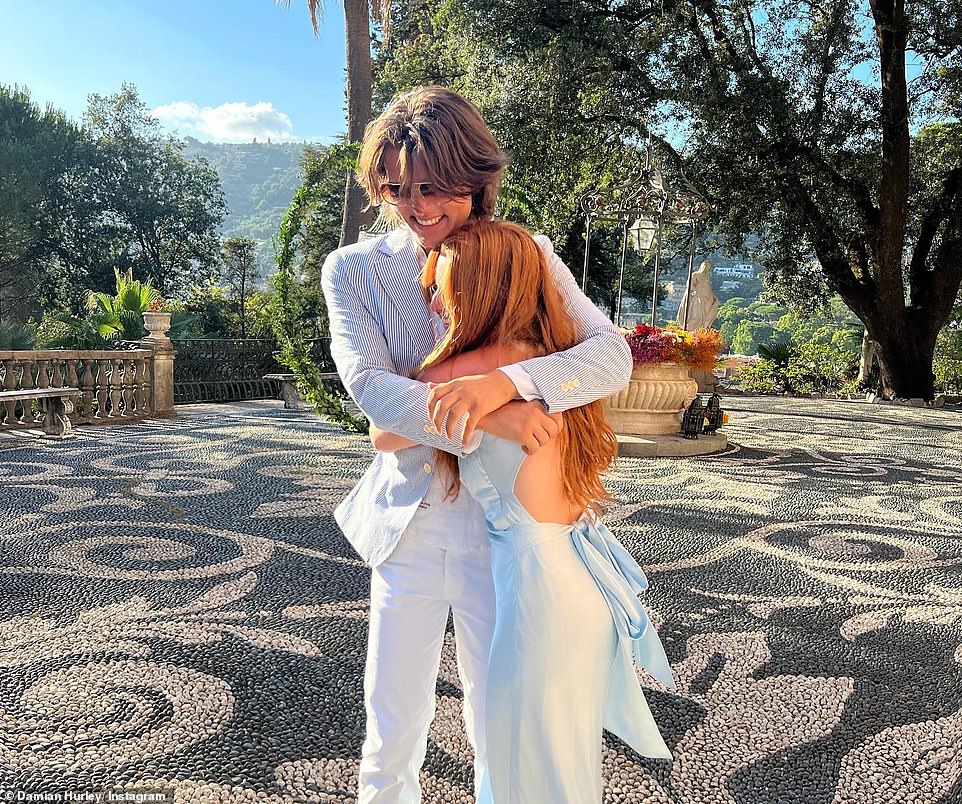 Closer than  ever: Damian hugged Millie in a tropical snap recently 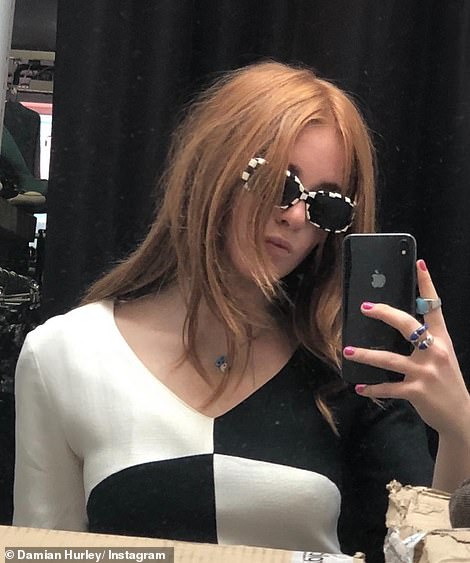 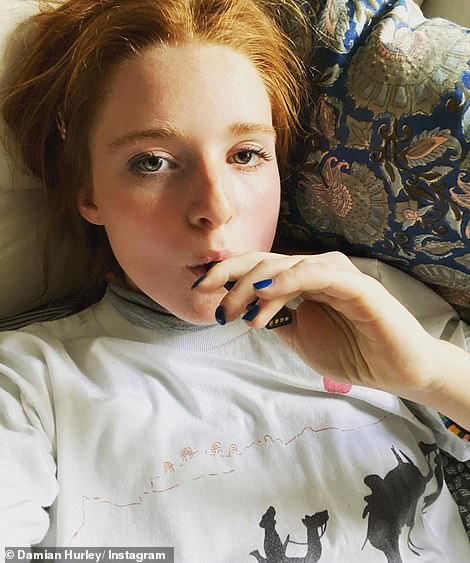 Insta: Since leaving the independent Berkshire school two years ago, Miss Griffiths has carved out a career as an artist

She also had a three-year romance with cricketer Shane Warne, who her son described as a ‘father figure’ after his death in March.

Damian recently graduated from drama school and is enjoying a summer of fun. On Sunday, he was seen letting his hair down at his friend Tess Goulandris’ birthday.

He recently paid tribute to several father figures including Hugh Grant and Elton John in a sweet Instagram snap to mark Father’s Day, however his biological father Steve Bing was absent from the album.

Uploading the images for his 136,000 followers, he wrote: Happy ‘Fathers’ Day to my beautiful Dad and some favourite men in my life! So much love to all.’

She went on to date businessman Arun, 57, and the couple got married in 2007 before breaking up four years later.

The swimwear designer soon found love with the late cricket legend Shane Warne, who she described as her ‘lionheart’.

The sports star died of a suspected heart attack at the age of 52 in March while on holiday in Koh Samui, Thailand.

Sir Elton John is the godfather of Damian while his long term partner David, plays a huge part in the runway star’s life.

Damian also included a picture of his mother’s good friend and shoe designer Patrick Cox who has also played an important role in his life.

Damian was born after an 18-month relationship between entrepreneur Steve and actress Elizabeth in the early 2000s, before the pair split amid a bitter paternity row.

While it had been reported that Steve never met his son, Elizabeth also took to social media after his death to say they had grown close in recent times and had spoken on his 18th birthday. 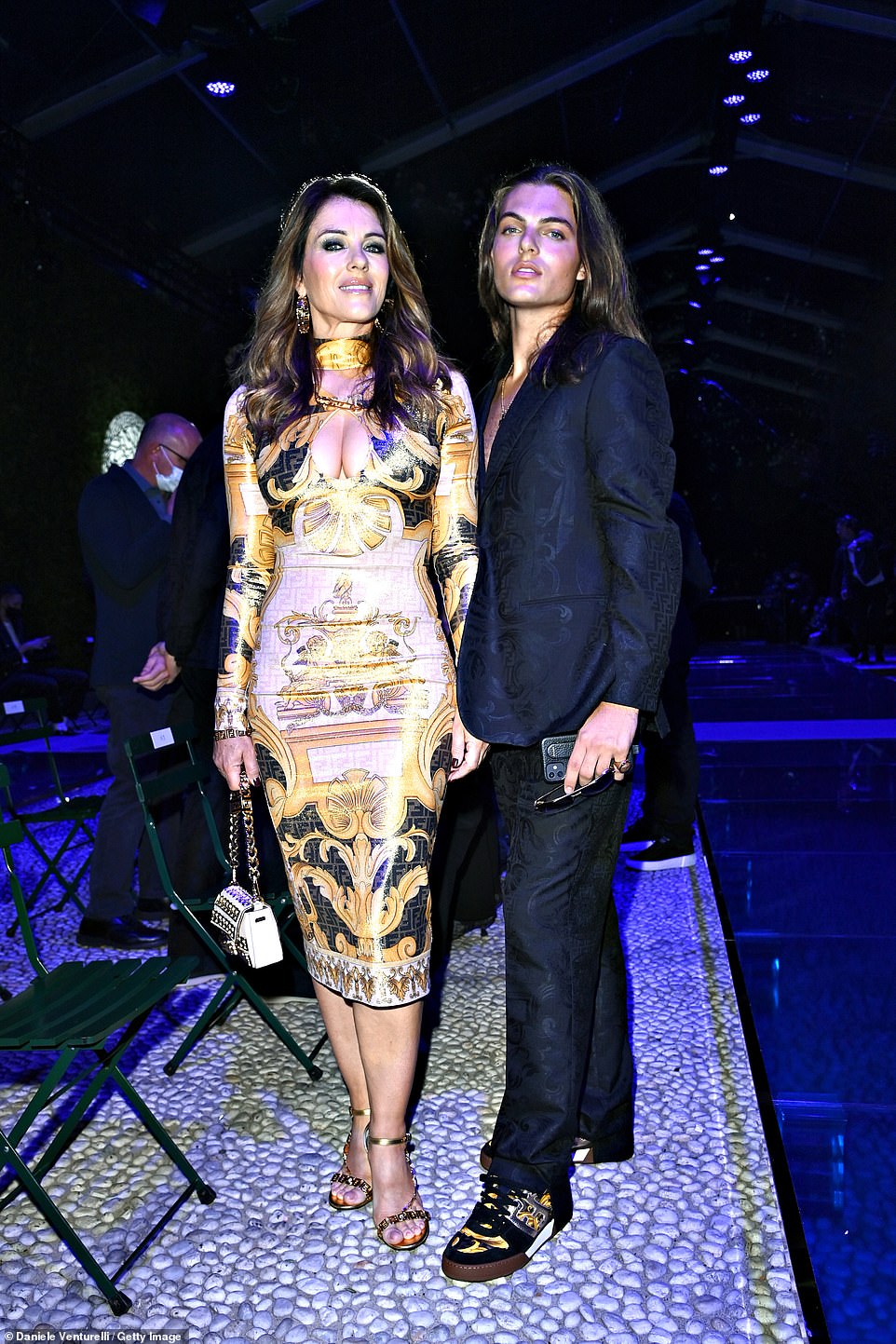 Famous mother: Damian is regularly seen out in public with his mother Elizabeth Hurley (pictured 2021)

Cardi B shared a screenshot of explicit text messages she and husband Offset recently sent...

Tyler Wrynn, a teacher from Oklahoma, was forced out of his 8th-grade teaching position in April after receiving backlash...

Coolio’s friends think his “severe asthma” may have contributed...
- Advertisement -