Graham Norton has hilariously poked fun at the UK’s after the nation came in second place at the Eurovision final, while viewers frantically took to social media to share their collective shock.

Ukraine clinched victory at the Eurovision Song Contest on Saturday after winning a stomping 439 points from the public tele-vote, giving them a grand total of 631, with the UK coming in closely behind.

Britain had stormed to the top of the leaderboard after the jury vote with 283 points, and earned an extra 183 points from the public, putting them in second place with 466 – the nation’s highest place for more than two decades. 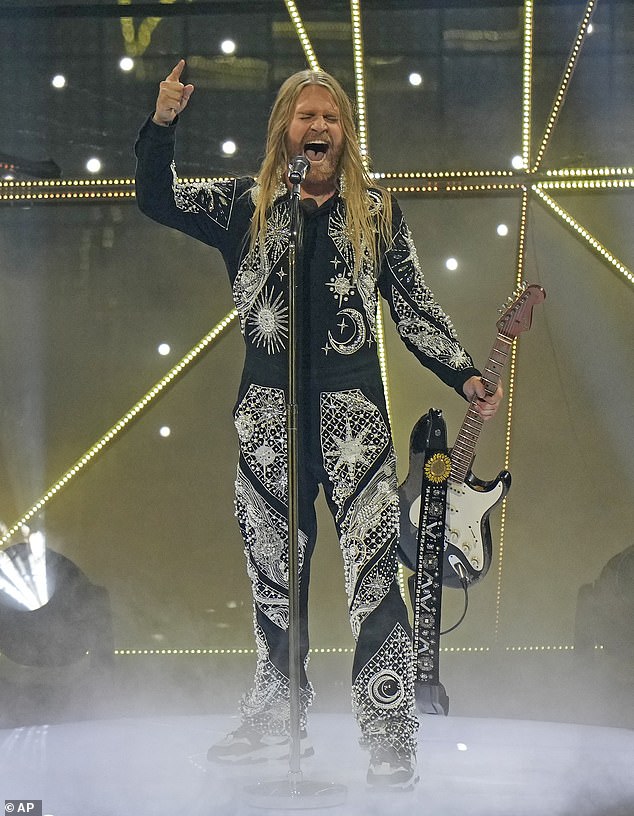 Amazing: Graham Norton poked fun at the UK’s after the nation came in second place at the Eurovision final with Sam Ryder’s performance of Space Man

And Graham Norton couldn’t help but express his surprise as he humorously insisted that it was ‘not a glitch’ or a ‘sketch’ as the UK kept creeping up the leaderboard.

Responding to his success during the final at Turin’s PalaOlimpico arena, Sam gushed: ‘Thank you so much… there’s so much gratitude sitting around in this green room… what an experience.’ 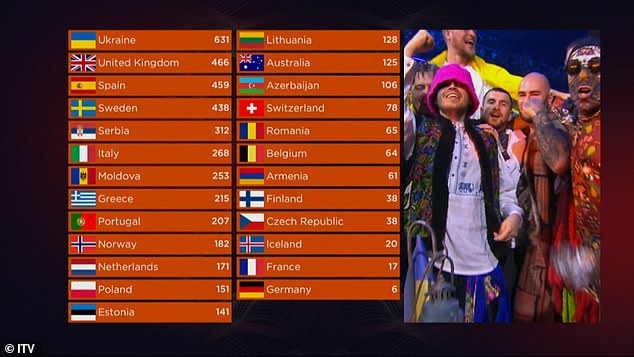 Joy: Ukraine clinched victory after winning a stomping 439 points from the public tele-vote, giving them a grand total of 631, while Britain came in second place with 466 points 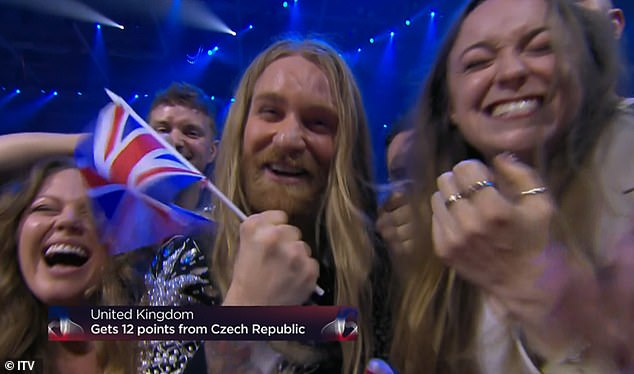 Wow! The UK incredibly came in second place – the nation’s highest place for more than two decades – during the Eurovision Song Contest on Saturday following years of ‘nul points’

And viewers were equally as shocked by the UK’s popularity, as ‘what is happening’ quickly began trending on Twitter as the tension increased during scoring.

One person tweeted: ‘I love the fact that WHAT IS HAPPENING is trending because the whole of the UK is collectively losing their minds about us not being complete pariahs in #Eurovision.’

Another wrote: ‘FRANCE GAVE THE UK 12 POINTS? WHAT IS HAPPENING?! IS EVERYONE OK? #Eurovision’

A third added: ‘What is happening????? did we somehow end up in the multiverse?? why is everyone giving the uk points??’ 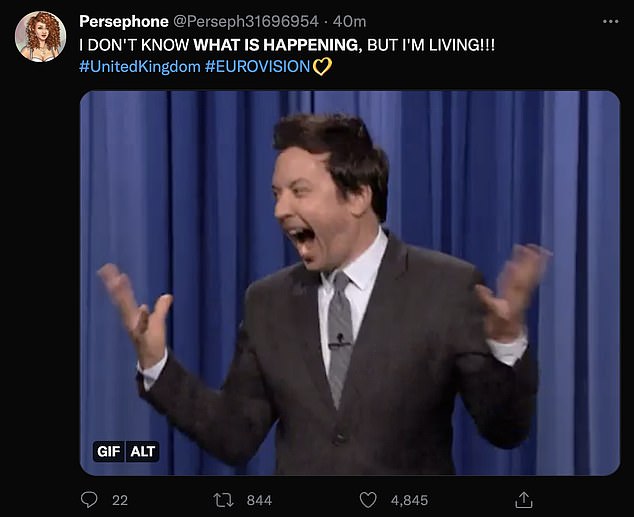 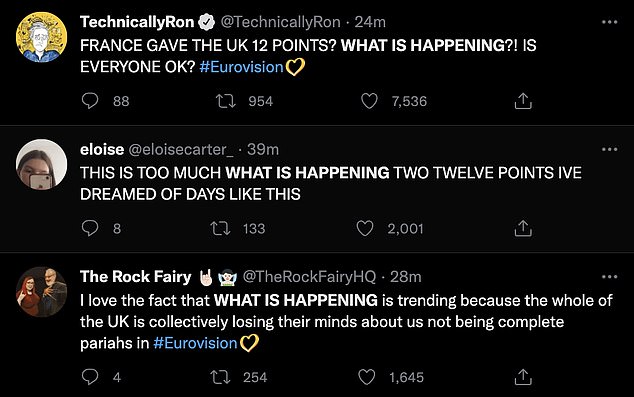 Amazed: Viewers took to Twitter to share their shock as ‘what is happening’ began trending on Twitter as the nation couldn’t believe the UK ranked so highly, beaten only by Ukraine 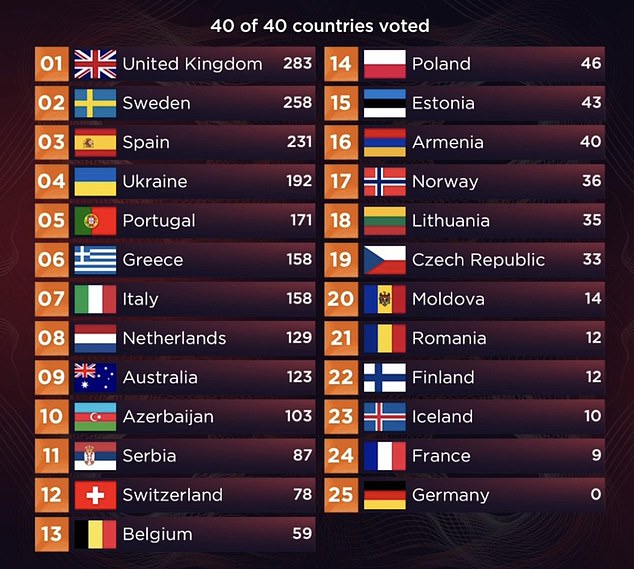 Thrilled: The UK stormed to the top of the jury leaderboard (pictured) before the public vote saw them move to second place at Saturday’s final Eurovision Song Contest

And a fourth said: ‘I DON’T KNOW WHAT IS HAPPENING, BUT I’M LIVING!!! #UnitedKingdom #EUROVISION.’

While a fifth penned: ‘Love that the British response to doing well in EV is that WHAT IS HAPPENING is trending.’

Another added: ‘The UK was in second place in Eurovision?! What is happening oh my god.’

TikTok star Sam – who shot to fame with his lockdown covers on the video-sharing platform – changed the UK’s run of bad luck after scoring nil points for the past two years. 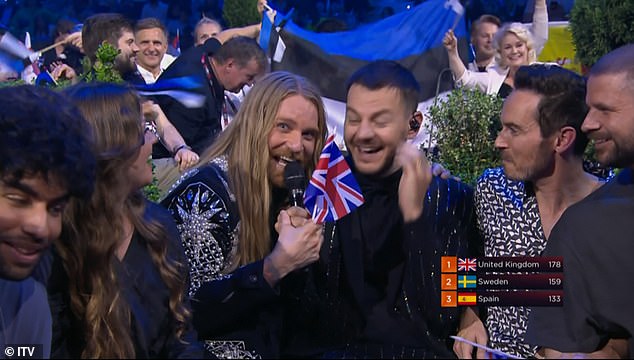 Overjoyed: TikTok star Sam – who shot to fame with his lockdown covers on the video-sharing platform – has changed the UK’s run of bad luck after scoring nil points for the past two years

‘We signed up here to come and sing we enjoy music, and I know that every single artist involved this year absolutely smashed it.

‘Everyone was a credit to themselves and a credit to what Eurovision is all about; unity peace, love, togetherness, inclusivity and expression.

‘Thank you for having us, appreciate [it].’

Prime Minister Boris Johnson congratulated Sam for his performance, tweeting: ‘Incredibly proud of Sam Ryder and how he brilliantly represented the UK tonight.’

Despite the UK’s success, it was Ukraine’s Kalush Orchestra who took home the crown after moving viewers with their poignant performance of Stefania amid the war in the country. 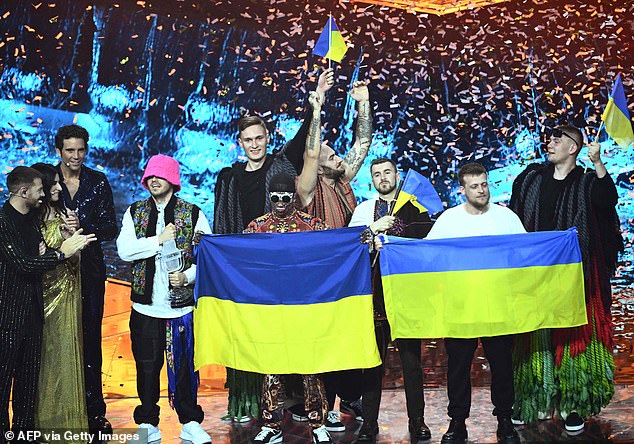 Winners! Despite the UK’s success, it was Ukraine’s Kalush Orchestra who took home the crown after moving viewers with their poignant performance of Stefania

The group – made up of rapper Oleh Psiuk, Ihor Didenchuk, Vlad Kurochka, Tymofii Muzychuk and Oleksandr Slobodianyk – wowed with their performance, which merged rap with folk and featured breakdancing, flutes and bold ensembles.

After taking to the stage, they thanked everyone for supporting their country amid Russia’s invasion of Ukraine.

After they were revealed as the champions and performed the song for a second time, they said: ‘Thank you, thank you so much.’

They had been given special permission to travel to Italy, as men their age are currently fighting for their country back home.

The band said of the song, which is a tribute to mothers: ‘We’re showing off our roots, and we’re showing how to take something from the past and make it work for the present.

‘That’s why we’ve found success at home, and we hope that we can find that sort of reception internationally, as well. We take something old, and we make it sound modern.’

UK Prime Minister Boris Johnson was quick to praise Ukraine and described their win was ‘a clear reflection of not just your talent, but of the unwavering support for your fight for freedom’.

He wrote: ‘Congratulations to Ukraine for winning the Eurovision Song Contest 2022.

‘It is a clear reflection of not just your talent, but of the unwavering support for your fight for freedom.’ 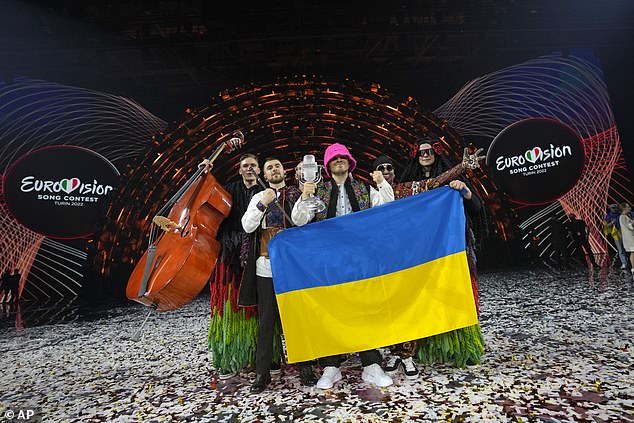 Gratitude: After taking to the stage, the group thanked everyone for supporting their country amid Russia’s invasion of Ukraine

Myer has been accused of having 'double standards' in...

Getty Falcons sign former inside linebacker Nick Kwiatkoski of the...

Kalush Orchestra won the Eurovision Song Contest 2022 for Ukraine, with the song Stefania – who is group member...

Myer has been accused of having 'double standards' in...
Entertainment

Britain's Got Talent comedian Francine Lewis has told of...
Entertainment

Jacqueline Jossa was pictured having what appeared to be...
Entertainment

Victoria Beckham: Being thin is ‘old-fashioned’

Victoria Beckham says being skinny is so last season.“It’s...
Entertainment

As the days go by since the leak of...
Entertainment

Getty Deshaun Watson #4 of the Houston Texans looks on...
Entertainment

Caviar to start. Then perhaps a sizeable portion of mussels....
Entertainment

David Walliams finally dished out his golden buzzer on...
- Advertisement -