Stacey Abrams is the perfect Democrat politician. She is boorish, deceptive, arrogant, and a liar.

And of course that means that the MSM is desperate to protect her from even the most well-deserved criticism. That’s why everybody and his brother has jumped on board the “that’s not a real heartbeat” bandwagon. Ed wrote about the absurdity of her claims that the patriarchy invented the sound of fetal heartbeats in order to further white supremacy or something. The RNC quickly tweeted out her bizarre assertion to ensure that it didn’t get memory-holed.

Georgia Democrat Stacey Abrams: “There is no such thing as a heartbeat at six weeks. It is a manufactured sound designed to convince people that men have the right to take control of a woman’s body.”

Twitter wars broke out, “fact checkers” discovered that ultrasounds don’t actually have anything to do with actual sounds, and doctors were schooled in the fine points of fake science. We learned from total ignoramuses that ultrasounds measure electrical activity (they don’t), and I expect we will soon see explanations of how pale penis people are responsible for women being the only people with wombs. Somehow there is a White Male conspiracy involved with anything that displeases a Leftist.

There was a conspiracy involved in Abrams’ claims, but it wasn’t the White Supremacists involved in perpetrating it. A lot of doctors were left scratching their heads because nothing Abrams or the fact checkers asserted made any sense. So where did her claim come from?

Hi there, I’m a cardiologist that does cardiac ultrasounds.

I was today years old when I discovered that an ultrasound can pick up electrical activity.

The fraud has its roots in stealth changes to the definition of “heartbeat” that were made just after the Dobbs decision was handed down. Abrams didn’t invent this falsehood. The butchers at Planned Parenthood did. Because of course they did. Evil people do evil deeds.

LifeNews had the story back in August:

For the second time in a month, Planned Parenthood is being called out for changing medical information on its website to match the pro-abortion talking points of the day.

In July, the abortion chain altered a section about ectopic pregnancies amid false claims that pro-life laws ban medical treatment for the condition. Then, this week, a pro-life medical doctor noticed that Planned Parenthood also changed how it describes an unborn baby’s heartbeat.

The earlier version states that an unborn baby has a “very basic beating heart” at 5-6 weeks of pregnancy. In the new version, however, Planned Parenthood uses more politicized, roundabout language that detracts from the truth.

“A part of the embryo starts to show cardiac activity,” according to the new description. “It sounds like a heartbeat on an ultrasound, but it’s not a fully-formed heart – it’s the earliest stage of the heart developing.”

It is cardiac pole vibrations now – but before heartbeat laws it was a real heartbeat: pic.twitter.com/tL6cxrne6S 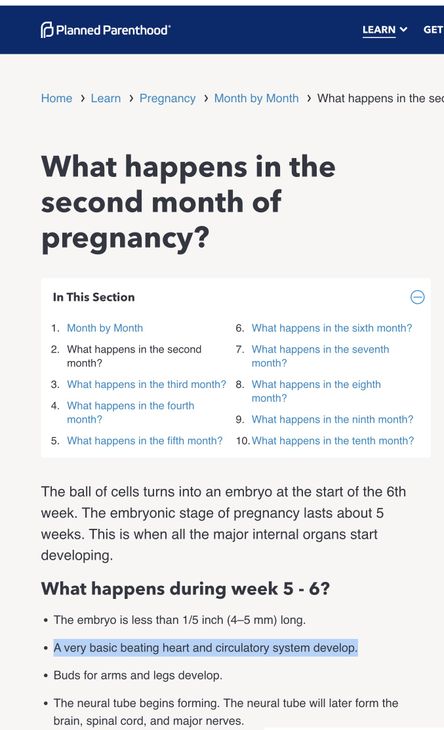 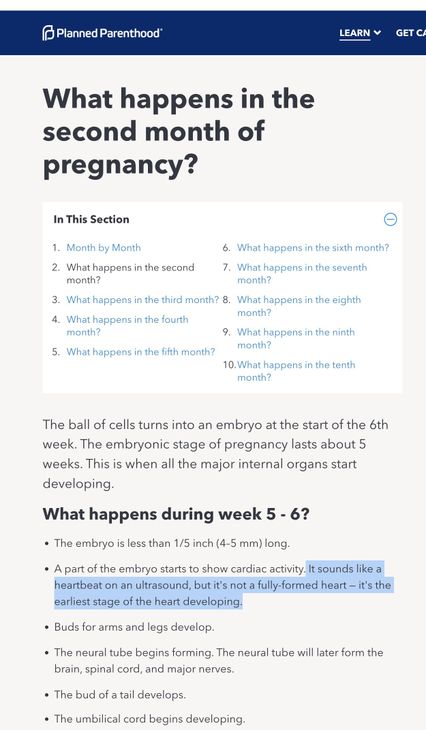 Redefining the meaning of a fetal heartbeat has enormous implications that go far beyond the simple emotional impact hearing a baby’s heart beat in the womb, as profound as that is. There are serious legal implications. Several states have laws that prohibit abortions once the fetal heartbeat begins, and if you are committed to extending the death zone for babies, you want that heartbeat to start as late as conceivable.

Hence the fraud. Again from LifeNews:

But altering the language does not alter the truth. According to a pregnancy outline on the Mayo Clinic website, “the heart and other organs also are starting to form and the heart begins to beat” at about four weeks after conception.

Secular Pro-Life recently compiled a list of quotes from textbooks, scientific journals and other expert sources that confirm an unborn baby’s heart begins to beat as early as 22 days gestation.

A few years ago, the prestigious University of Oxford and the British Health Association also published a study suggesting that the human heart may begin beating as early as 16 days after conception.

“The heart is the first organ to form during pregnancy and is critical in providing oxygen and nutrients to the developing embryo,” the university researchers wrote.

Despite the misinformation from Planned Parenthood and other pro-abortion groups, the truth is clear.

Baby websites, doctors, scientific research – even TV shows – and more all acknowledge what millions of mothers know to be true, women who saw or heard soon after that first positive pregnancy test the heartbeat of a tiny, living unborn child.

There is of course nothing startling about Stacey Abrams repeating the lies spewed by Planned Parenthood. It happens every time a 24-time period has a name ending with “-day.” It’s hardly newsworthy in itself.

What does seem striking to me is how quickly the “fact checkers” in the media jumped on board to lie for Abrams. They uncritically repeated her falsehoods, likely using Planned Parenthood’s edited timeline of fetal development, and called it a day. They simply read the talking points handed to them and don’t even bother to consult, say, an ultrasound specialist who could tell them that Abrams is full of bunk.

When a Washington Post reporter can blithely tell us that “FWIW, an “ultrasound picks up electrical activity generated by an embryo” and a real heartbeat, he is clearly wrong, and either completely ignorant of what he is saying or playing fast and loose with the truth. Ultrasounds don’t pick up electrical activity because they don’t even detect it. There is a reason they are called ultraSOUNDS.

If Stacey Abrams blurted that an X-ray didn’t detect the bones of a fetus in the womb I suppose we would get explanations about how X-rays don’t actually SEE the bones; the image is only a shadow cast onto a detector and hence is created by White Supremacists or some such nonsense.

It’s pathetic. We expect all politicians to shade the truth, and expect failing politicians to flail like a drowning man in the ocean spitting out lies like they were saltwater. Yep, it’s Friday, another lie.

But despite a long track record of being stenographers for Democrats I still can be amazed about the extent to which the MSM and Leftist commentators will abase themselves in service to their masters. There is no depth to which they will not sink.

P.S. I do strongly recommend you (re)read Ed’s piece. It is excellent, and points you to great references that will explain the entire issue from all angles.

Missouri Senator Josh Hawley called for the resignation of Department of Homeland Security (DHS) Secretary Alejandro Mayorkas as the...
- Advertisement -

The untold truth of French billionaire

House Speaker Nancy Pelosi was booed on stage during a surprise appearance at a New York City climate change...

Royal fans have paid tribute to Her late Majesty...
Entertainment