Demi Burnett is being slammed by fans of “Bachelor in Paradise.”

The Bachelor Nation veteran, who appeared on Colton Underwood’s season of “The Bachelor” and the most recent two seasons of “Bachelor in Paradise,” was one of the most vocal opponents of co-stars Brendan Morais and Pieper James’ pre-show relationship.

On camera, Burnett blasted the clout-chasing couple and called out the double standard of them being allowed to stay on the show after Alana and Chris, another “pre-show” pair, were run off the beach by their angry co-stars.

But viewers did not appreciate Burnett’s take on the situation given the fact that in 2019 she came to “Paradise” while already in a relationship with girlfriend Kristian Haggerty, who was not a franchise alum.

In an unprecedented twist, the two women became the franchise’s first-ever-ever same-sex couple and were allowed to continue their romance on camera. They even got engaged on the finale.

On social media, viewers slammed Burnett as “the biggest hypocrite” for talking about people who were already in relationships before “Paradise.”

“Why isn’t anyone calling out Demi for having a full-on girlfriend at home during her first season of #BIP,” one viewer wrote on Twitter.

“The irony of you complaining about someone being on the show with a gf…..” another wrote to Burnett on Instagram.

“Why was it wrong when Brendan brought his girlfriend on the show but not when u did?” another asked the reality star.

Others called Burnett out for using fellow “Bachelor in Paradise’ star Derek Peth to secure her spot on the beach until Haggerty showed up.

“You should have been run outta bip last year when you did THE EXACT SAME THING TO DEREK,“ one viewer wrote on Twitter.”The one yelling loudest with the pitchfork is usually guilty. You are a hypocrite. Hope you find your way far away from the cameras and stop trolling for followers at everyone else’s [expense].”

“Not defending Brendan/Pieper, but am I the only one who remembers Demi remained on the show after locking in w/ her g/f from back home when she showed up on the beach, ‘taking up spots’ w/ someone she was already involved with? She maybe should have sat this battle out, #bip,” another added.

“#Demi is such a hypocrite!” another fan wrote. “Last season she used a guy until she could get her girlfriend to the island and then they spent the rest of the time on vacation. so she did exactly what she’s accusing this couple of doing.

Derek Peth Forgave Burnett For Their ‘Bachelor in Paradise’ Breakup 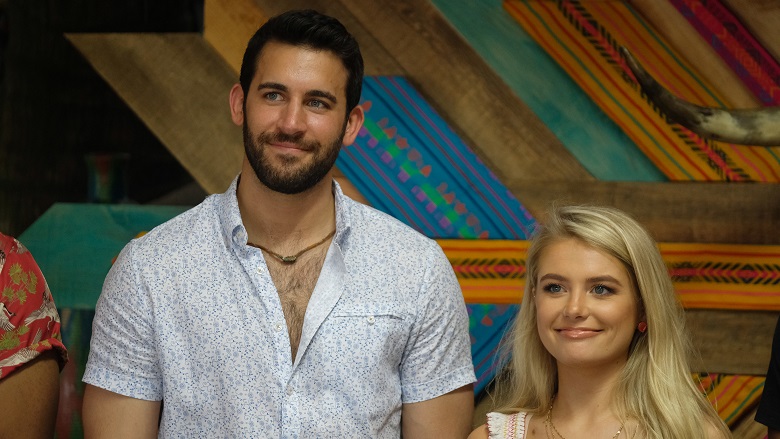 While fans are outraged by Burnett’s antics on both seasons of “Bachelor in Paradise’, longtime viewers recall that she was torn between her feelings for co-star Derek  Peth and for Haggerty, whom she had been dating prior to leaving Los Angeles to film in Mexico. After Burnett dumped Peth to be with her hometown girlfriend, Peth defended her.

At the time, Peth asked viewers to have “empathy” for Burnett and her situation.

“I think it’s unfair to assume we should all be clean slates bent on getting engaged because we’re on a show,” Peth wrote. “This is our lives and we’re all just people seeking meaningful connections. That’s what Demi and I are both doing and it should be respected.”

Burnett and Haggerty left “Paradise” as an engaged couple, but announced their split on Instagram in November 2019 per Cosmopolitan. Burnett later told Ben Higgins and Ashley Iaconetti’s “Almost Famous” podcast that she was the “bad” person in the relationship.

“I wasn’t as good to her as she was to me,” Burnett revealed. “I was kind of distant. I was overwhelmed, I was freaked out.”

She added that she wasn’t “anywhere near ready” to be in a public same-sex relationship with Haggerty and felt “like a garbage human being” after their breakup.

A 15-year-old British girl has vanished in Majorca in what cops are calling a 'disturbing' case. Emina Ilora Alice Winterbotton...
News

The Voyeurs Ending Explained: What happens with Julia & Seb?