The Border Crisis in Del Rio Was Caused by Biden, Now There’s a Second Attack on DHS Agents 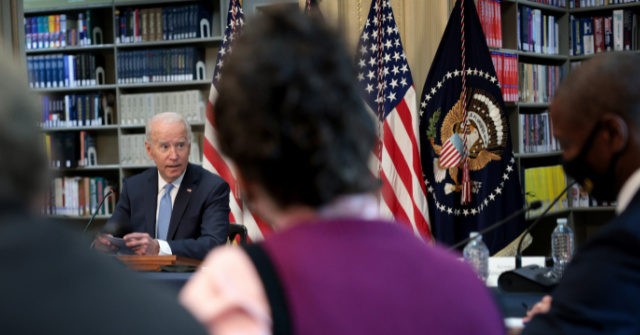 “The vaccine requirements work,” Biden said to reporters at the top of the meeting at the White House. “More companies are instituting them.”

Joe Biden met with the CEOs of Kaiser Permanente, Walgreens, Walt Disney, Columbia Sportswear – who attended the meeting in-person – and the president of Microsoft, who joined virtually.

Former White House Chief of Staff for George W. Bush Josh Bolten, now leading the Business Roundtable, a lobbying group for businesses, also attended, as well as the president and CEO of Children’s Hospital of Philadelphia.

Biden praised the group for “leading the way” on vaccine mandates and encouraged other businesses to follow suit.

During the event, Biden touted Goldman Sachs and Fox News for their endorsement of vaccine mandates.

“Even Fox News is requiring it,” Biden said. “I am not being facetious when I say that, but it’s interesting that they’ve stepped forward and done that as well.”

The President of Louisiana State University, who also enacted vaccine mandates for students, attended the meeting and earned praise from the president for increasing vaccination rates from 63 percent to 81 percent.

“It’s about beating a virus and it’s about saving lives —that’s what this is all about,” he said.

The White House escorted reporters out of the room before any of the CEOs spoke.

Getty Lamar Jackson during a game with Kansas City in 2021. ...
News

Family of Mike Milbury; Who is his Wife? Kids and Net Worth in 2021, Age

She means business! Meghan Markle is understated in a black coat and wide-legged trousers

Tech: Apple could soon be FORCED by EU rules to change iPhone charging cables to USB-C

Ryder Cup 2021: When are pairings announced for Friday’s foursomes and fourballs?

Number of Britons falling ill with Covid every day falls by 5% in a week, symptom-tracking app shows