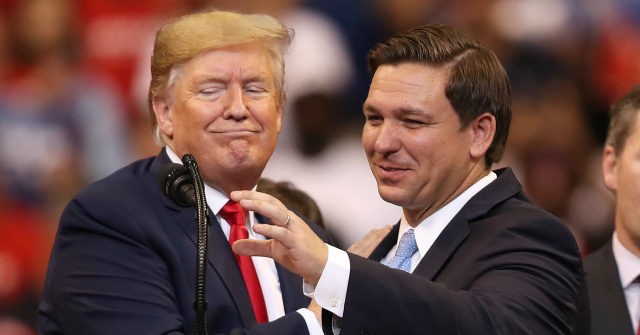 Former President Donald Trump has reportedly been bashing Florida Gov. Ron DeSantis (R) in private as a potential 2024 primary opponent, calling him a “dull personality” with no chance of winning.

As polls continue to put Ron DeSantis in the top spot for the 2024 nomination without Donald Trump on the ballot, sources confirmed to Axios that the former president has been privately trashing the popular Florida governor.

“In the context of the 2024 election, he usually gives DeSantis a pop in the nose in the middle of that type of conversation,” an anonymous source told Axios.

The source noted that Trump does not consider the Florida governor a serious threat in 2024, asserting he “has no personal charisma and has a dull personality.”

Another source argued that the former president’s dissatisfaction with DeSantis stems from the fact that the governor “won’t say he won’t run [in 2024].”

“The others have stated pretty clearly they won’t challenge him,” the source said.

Trump reportedly said, “What’s the big deal? Why won’t he just say he’s not going to run against me?”

The source added that DeSantis would need the former president’s endorsement to secure the 2024 nomination.

Last week, Maggie Haberman of the New York Times reported that Trump has expressed frustration to several aides about the lack of deference from DeSantis over the 2024 primary.

Trump could always decide not to run but every indication is he will. And once again he’s moving to set the terms of engagement with his potential rivals while those rivals are mostly averting their gazes and hoping he goes away.

Neither Trump nor DeSantis commented on the Axios report. Speaking on the Ruthless podcast last week, DeSantis said that reports of a feud between him and Trump are a media creation.

“I think this is what the media does,” DeSantis said. “You cannot fall for the bait. You know what they’re trying to do, so just don’t take it. Just keep on keeping on. We need everybody united for a big red wave in 2022. We’ve gotta fight the left, and not only fight, but beat the left. And that’s what we’re doing in Florida.”

The former president has thus far avoided criticizing Ron DeSantis publicly, opting for veiled criticism instead. During an interview with OAN last week, for instance, he bashed “gutless” politicians for not revealing their booster shot status. The comment was taken as a hit against the Florida governor.

“I’ve had the booster. Many politicians — I watched a couple of politicians be interviewed and one of the questions was, ‘Did you get the booster?’ because they had the vaccine, and they’re answering like, in other words, the answer is ‘yes,’ but they don’t want to say it, because they’re gutless,” he said.