By Mark Duell and Elmira Tanatarova For Mailonline

Britons across the country were woken up by huge thunderstorms overnight as tens of thousands of lightning strikes lit up the skies – while temperatures remained high with another 23C (73F) day on the way today.

Following a tempestuous night, the Met Office revealed that provisionally more than 28,000 lightning strikes were recorded across the UK, English Channel and near continent in the 24 hours up to this morning.

The thunderstorms featured heavy rain, lightning, hail and gusty winds and shifted north-east overnight up until 3am this morning, with southern and eastern England most affected before they moved into the Channel.

Forecasters had warned of travel disruption due to the storms, amid concerns that spray and sudden flooding could lead to difficult driving conditions and some road closures as well as possible power cuts.

It comes as temperatures remained high today following the UK’s two hottest days of the year so far – with 23.8C (74.9F) at Santon Downham in Suffolk yesterday and 27.5C (81.5F) at London Heathrow Airport on Tuesday. 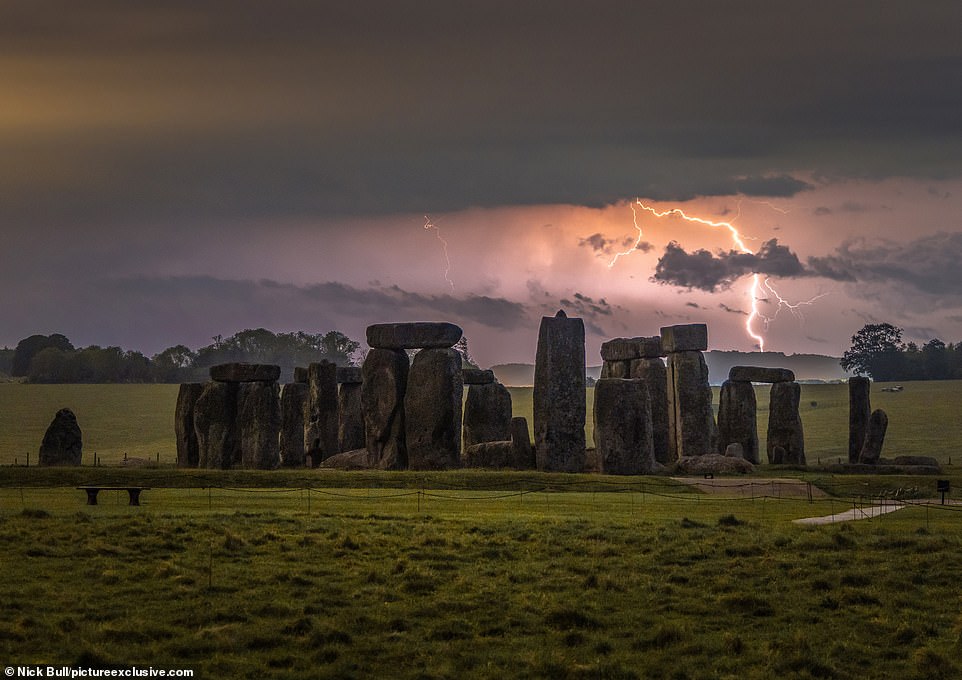 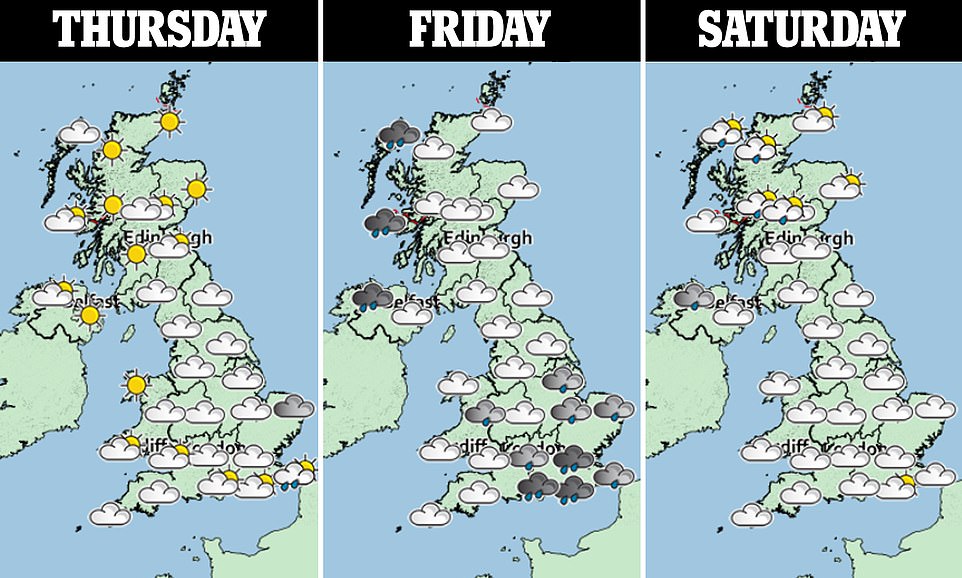 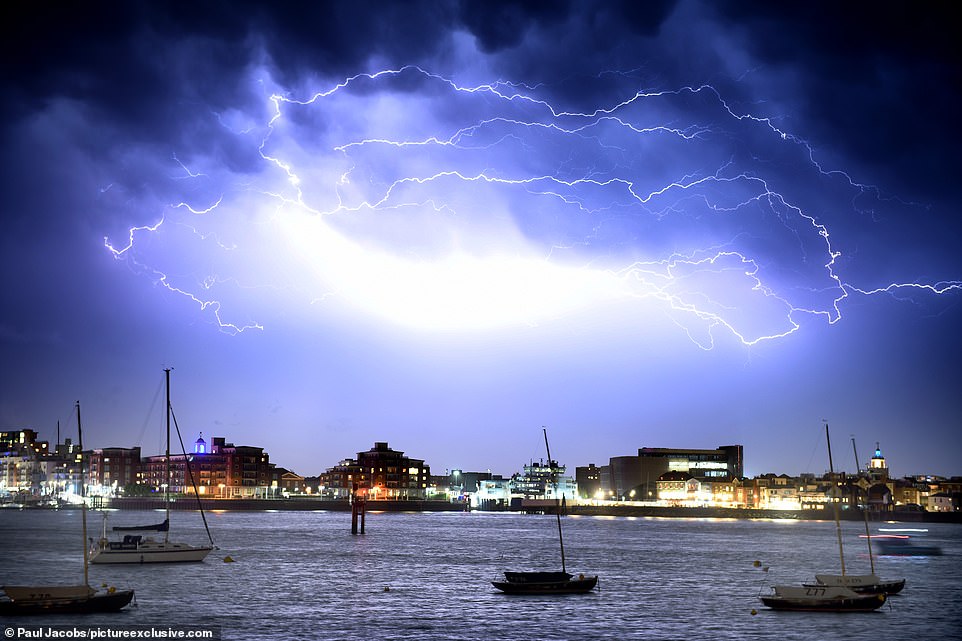 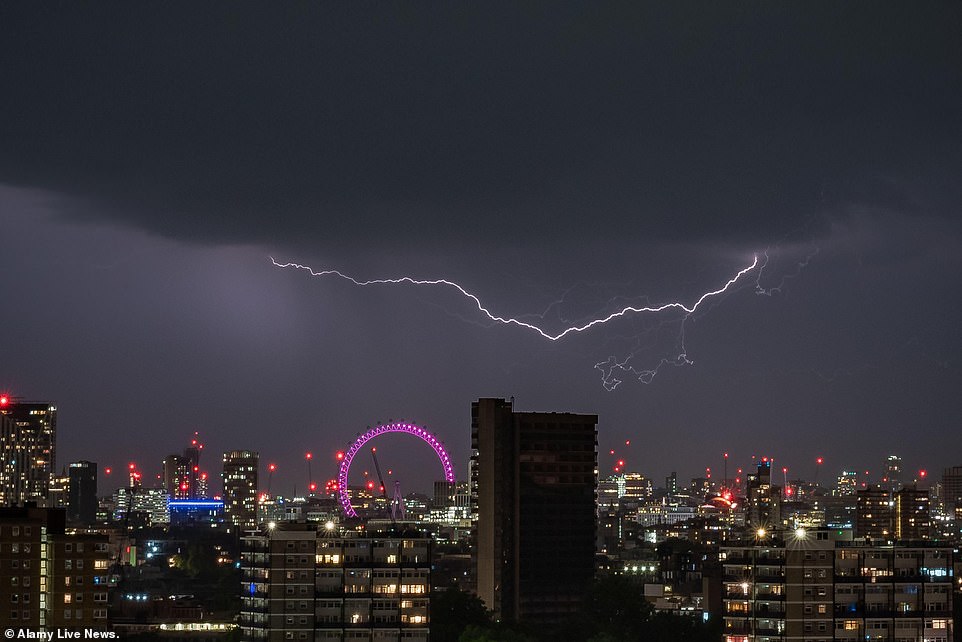 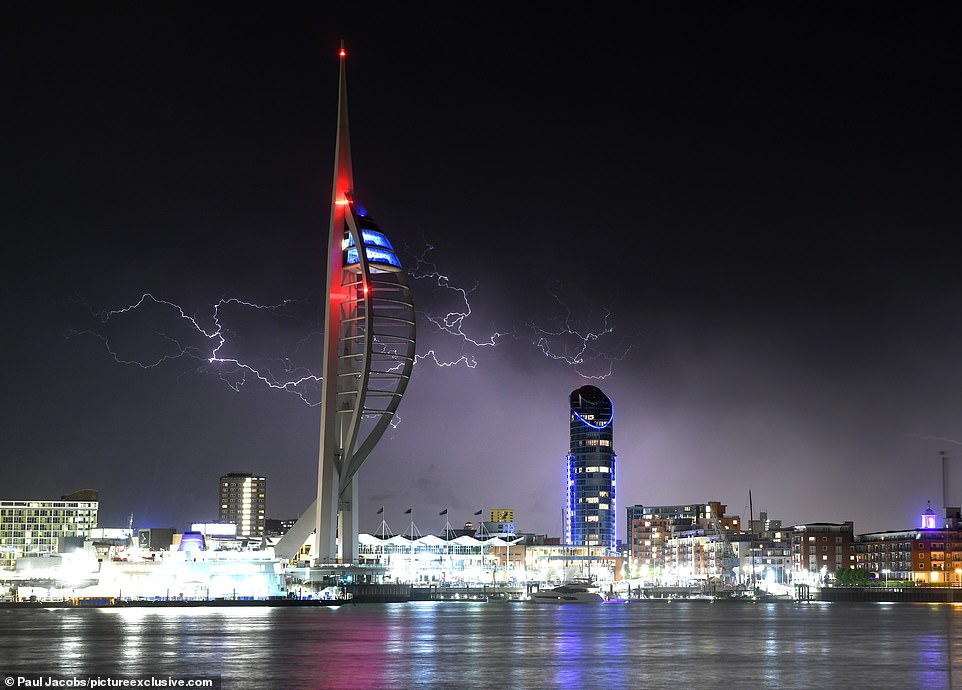 But conditions will be cooler from tomorrow when South East England is only expected to get up to 18C (64F). The UK’s previous 2022 high before this week was 23.6C (73.5F), recorded at Faversham in Kent on May 6.

The hot weather this week is due to an air mass from the south bringing up mild air – but temperatures will slowly decline as the air mass moves, bringing in fresher air and conditions closer to the average for this time of year.

The Met Office had issued a thunderstorm warning for southern and eastern England from 7pm last night until 3am today, warning of a ‘chance of delays and some cancellations to train and bus services’.

The warning added that there was ‘a small chance that homes and businesses could be flooded, with damage due to floodwater or lightning strikes’ and that the storms ‘may bring disruption in some areas, especially to travel’. 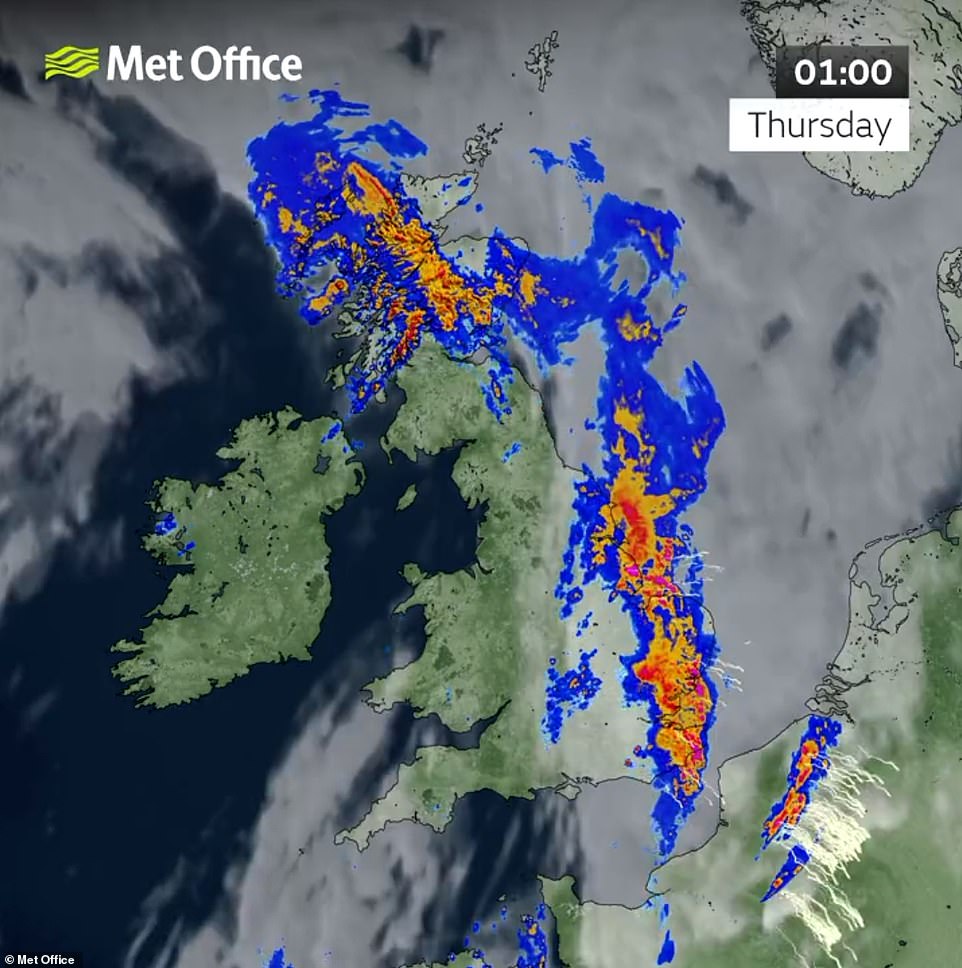 The Met Office said that provisionally more than 28,000 lightning strikes were recorded in the 24 hours up to this morning

Forecasters said many places would avoid the heaviest rain and thunder, but others ‘could experience torrential downpours and frequent lightning, while large hail and strong wind gusts may also affect a few places’.

Central parts of southern England were worst hit, and the wettest spots were expected to see 1in (25mm) of rain within an hour, and ‘a possibility that somewhere could catch over 40mm (1.6in) in two or three hours’.

This week Britain has been warmer than popular holiday destinations like the Greek island of Santorini, which only saw 26C (79F) on Tuesday. 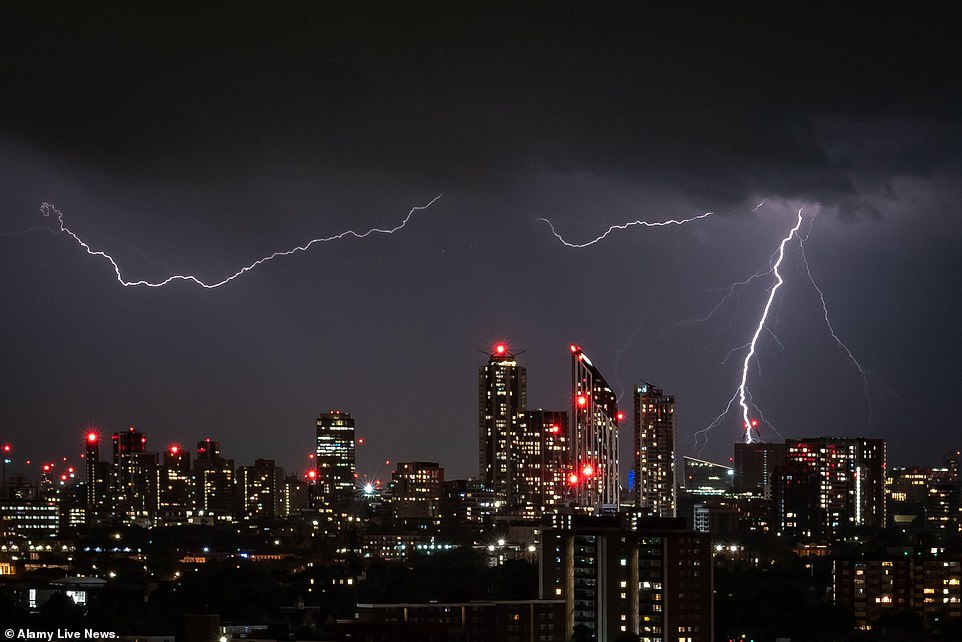 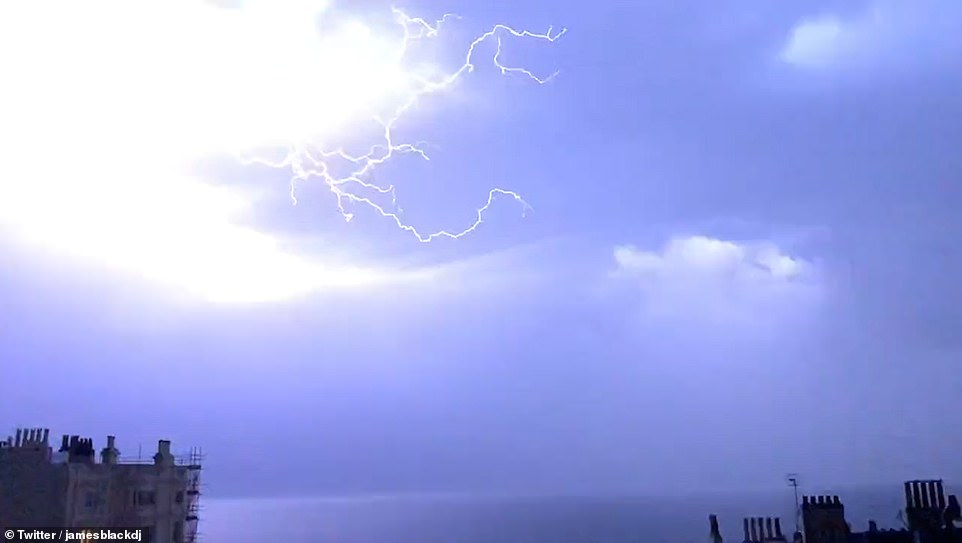 Lightning bolts in Brighton, East Sussex, overnight as England was hit by tens of thousands of lightning strikes 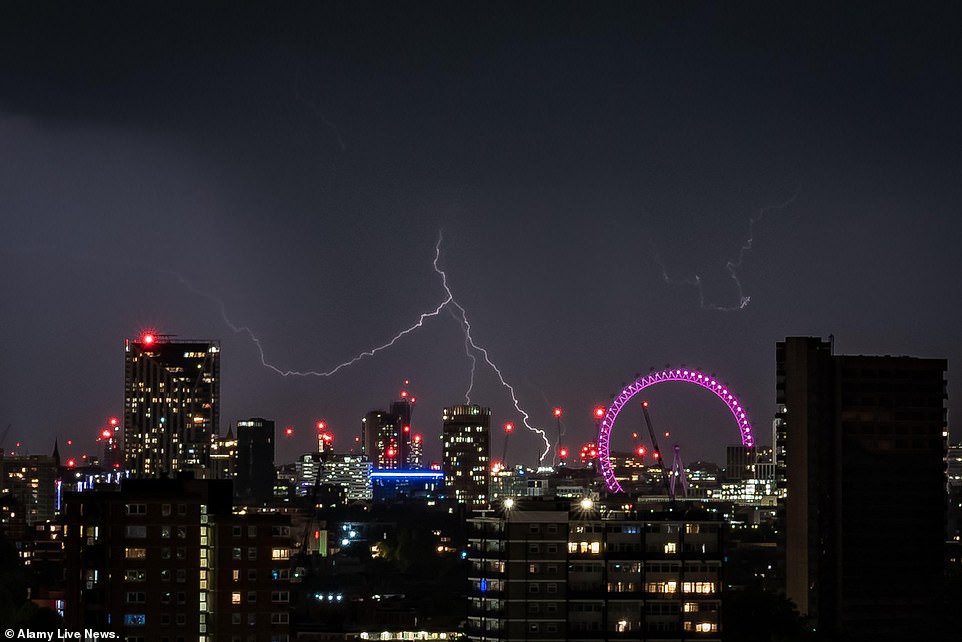 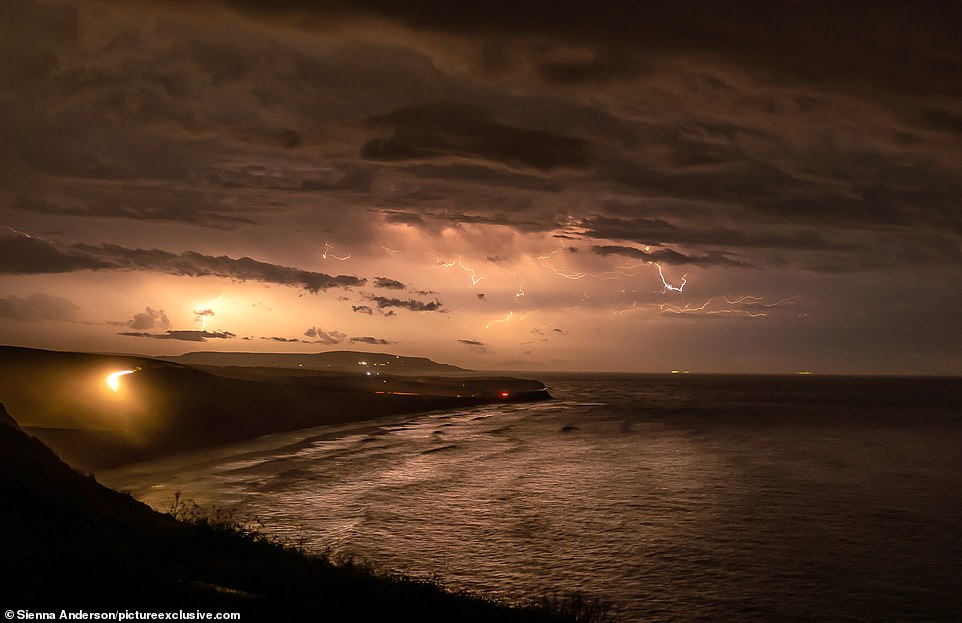 A lightning storm over the Isle of Wight, looking over Compton Bay yesterday evening amid the tempestuous conditions

It comes ahead of the possible arrival of Saharan dust over Britain this week – which together with a forecast for drizzle tomorrow could result in ‘blood rain’ over parts of the country.

Satellite imagery from the European Space Agency shows a plume of Saharan dust making its way across the Atlantic Ocean to the Caribbean – and it is predicted to hit the Iberian Peninsula and South East England.

This could result in ‘blood rain’, which occurs when relatively high concentrations of red-coloured dust or particles get mixed into rain, giving it a red appearance as it falls and sometimes leaving a layer of dust on cars.

The Met Office’s Richard Miles said: ‘There are some dust concentrations in the atmosphere above the UK at present which might well be washed out in the rain tonight, but it’s likely to be relatively small amounts on the whole.’

California will offer health insurance to all undocumented immigrants...
News

Serena Williams has opened up about the regret she...
News

Earlier today it was announced that there were many...
- Advertisement -