At London Fashion Week, Lena Dunham, creator, writer and star of the genius TV series Girls, walked the catwalk in a gold-leaf mini-dress by the emerging British label 16Arlington.

She made a startling change from the size 8 models usually seen, and her appearance was widely praised as an example of greater body diversity.

The following night the indefatigable American singer-songwriter Lizzo stormed the Brit Awards, massive in her leather corset and again heralded as a torch-bearer for body positivity.

It’s encouraging to see that women this large can take centre stage at both these events, where how you look is as significant as what you do – and sometimes more so.

But they are just as extreme physical examples of womanhood as skinny models – only the other end of the spectrum. 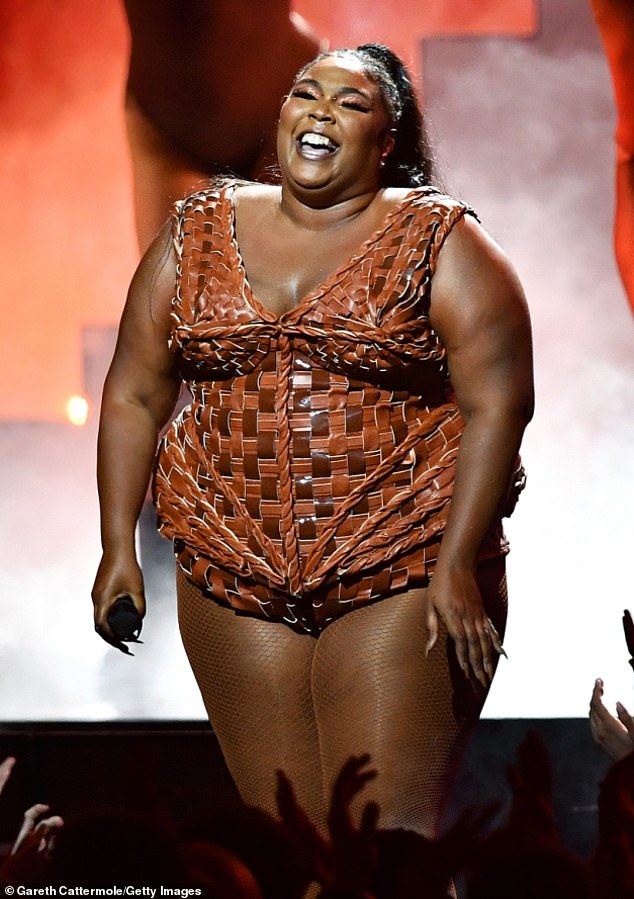 The indefatigable American singer-songwriter Lizzo (pictured) stormed the Brit Awards, massive in her leather corset and again heralded as a torch-bearer for body positivity

So why is it that you have to be huge to gain body positivity plaudits? As the ex-editor of Vogue, a magazine that regularly featured the most successful models in the world, most of whom were extremely thin, I am not poacher turning over-zealous gamekeeper.

I maintained then – and I still maintain now – that it’s perfectly acceptable for slim models to be employed to show off clothes. Those girls look great. But that’s a narrow area of employment.

The other day, celebrity stylist Mary Fellowes spoke about how hard it was to find red-carpet outfits for clients such as Olivia Colman who aren’t skinny.

Olivia, I think we can agree, is hardly a heffalump.

But you won’t see a fashion house eagerly embracing women her size to dress, although you may well find them making a big fuss about somebody famous with the dimensions of Lizzo, or an earlier fashion industry favourite the equally substantial Beth Ditto.

And, it’s by no means only the fashion industry that acclaims wildly overweight (there – I’ve said it) celebrities.

Anyone should be able to be the size that she (or he) feels most comfortable with. It’s not for me or anyone else to preach about what is correct.

But a real jump in body positivity would see more women with a bit of a tummy and a chunky thigh being as celebrated for their looks as the extremes of Lizzo or a Bella Hadid.

The pure pleasure of life in the slow lane

Halfway through writing the above item I decided to take myself off to Kettle’s Yard, the wonderful Cambridge gallery, to think some things through.

I was in no rush to get there or get home, unlike the rest of the Tube and train travellers crowding through the barriers to make it on to the 15.44. And indeed, unlike myself on most journeys.

On this expedition I didn’t manage to work out why you can describe someone as thin but not as fat without being called out for body-shaming, but I did learn that not being in a hurry adds considerably to the pleasure of everyday life.

This Philip Green’s not greedy enough!

Philip Green probably won’t be using the cinema on his yacht Lionheart to screen Greed, the new film that stars Steve Coogan as ‘Greedy’ McCreadie, a high-street retail mogul inspired by Green himself.

But if he does, I can guarantee he’ll be utterly appalled by how much less extravagant his world appears in the film than it is in reality.

Even Coogan’s swimming trunks are wrong, with a flapping white label that smacks of a cheap department-store label rather than the stitched-in navy logo of Vilebrequin – the brand Green, like every wealthy bloke, slips into for lounging poolside. 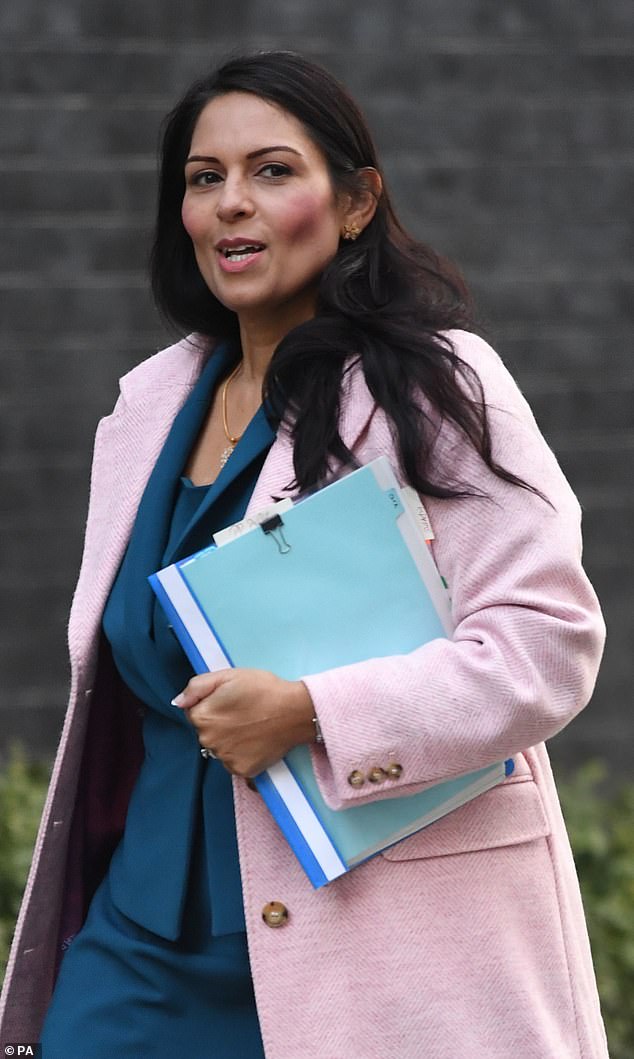 Priti ignores her own home truths

Personally, I think there’s something terribly sad about Priti Patel’s enthusiasm for the new immigration policy.

It’s well-known that her own Ugandan-Asian family were embraced by this country when they had to abandon their homeland where they were no longer welcome.

The Patels arrived here slightly before the large Ugandan-Asian immigration of 1972 when the same debate swirled as continues over asylum status today.

Burning rags were thrown into the homes of members of the Race Relations Board who were urging their acceptance.

The Heath-led government had to battle with considerable negative public opinion over the newcomers.

The new points-based system does not apply to asylum-seekers and refugees, and the Ugandan-Asians had British passports, but the criteria (including a firm salary offer of above £26,000) hardly demonstrates a welcoming attitude.

Nor does Patel’s claim that we ‘have done more than our share’ when it comes to taking refugees.

You might have hoped that she would have learnt something from our country’s embrace of her own family and the opportunities we gave them.

You might have thought that she would recognise what we all gained from the formidable work ethic of families like her own who started the late-night corner-shop culture we now benefit from.

But in her alacrity to be excluding rather than inclusive regarding whom we allow into post-Brexit Britain, it is clear that none of the above applies.

I’m stressed… about not worrying enough

The new malaise among those of us who don’t have enough really pressing problems is whether we should worry about the fact that we aren’t worrying about the coronavirus.

After all, there is a school of thought that it’s not worth worrying about anything because it’s the thing we don’t worry about that will get us in the end. Got it?

Simple secret to the Royals’ survival

I’m still rooting for the impressive Lisa Nandy in the forthcoming Labour leadership election. I don’t agree with her desire to get rid of the Monarchy – which she admitted to on a Channel 4 debate last week – but at least she didn’t feel it would be a priority if she became Prime Minister.

That’s probably precisely why the Royals have survived for so long. Every time the idea of disbanding them comes up, there’s something far more troubling that has to be dealt with first.

Sometimes survival is more assured if it’s not your head that pokes up first above the parapet.

Theo Wargo/Getty Images Brady on the set of ‘People Now.’ Wayne Brady has weighed in on the ongoing debate over who should succeed Alex Trebek as the next “Jeopardy!” host. The 49-year-old has his own experiences with game shows, serving as the host of “Let’s Make a Deal” and “Game of Talents.” “I think that…

A rogue Liberal MP was confronted by Treasurer Josh Frydenberg after voting against the Government in support of a federal corruption watchdog. Bridget Archer, who represents the marginal Tasmanian seat of Bass, supported independent MP Helen Haines who wants a debate on her integrity commission bill. Ms Archer was pictured talking to Mr Frydenberg about her controversial…

Swoosie Kurtz is an award-winning actress who was born on September 6, 1944 in Omaha, Nebraska, United States. Her work has earned her two Tony Awards and an Emmy Award, and some of her most well-known pieces include “Fifth of July,” “Carol and Company,” “Mike & Molly,” “The House of Blue Leaves,” and “Liar Liar.”…

We reported earlier on Joe Biden’s remarks at Arlington National Cemetery. During the remarks, he referred to the famous baseball player Satchel Paige as “the great negro.” Biden tells a story about “the great negro at the time” Satchel Paige. pic.twitter.com/VcyfHQkCEm — Townhall.com (@townhallcom) November 11, 2021 “I know that you’re a little younger than… 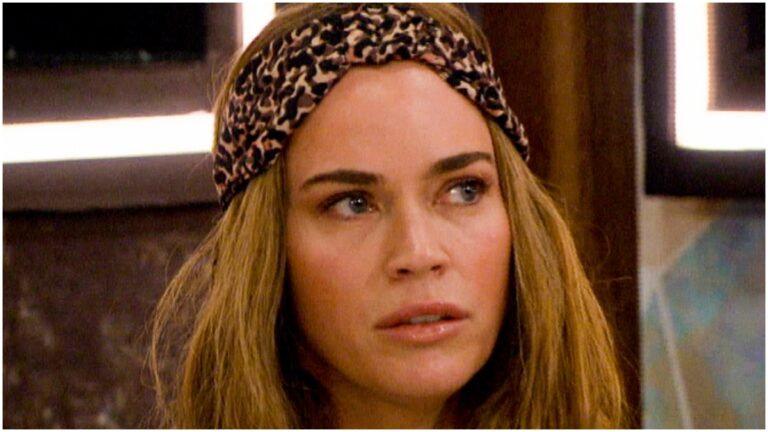 CBS Teddi Mellencamp. Teddi Mellencamp was the first star eliminated on the third season of “Celeb Massive Brother,” however the former “Actual Housewives of Beverly Hills” star got here away with greater than only a few weeks value of reminiscences. Whereas dwelling within the CBS wintertime home with fellow celebs Carson Kressley, Todd Bridges, Miesha…