Many fans and fellow American Idol wannabes were upset and saddened to learn of Wyatt Pike’s sudden departure from season 19 this week.

And now, less than two days since the startling news, the 20-year-old singer is opening up for the first time about his decision to leave the competition show despite making it to the Top 16 and subsequently qualifying for the Top 12.

‘I had to leave the @AmericanIdol competition for personal reasons but am so thankful I get to play music for the rest of my life,’ the Utah native captioned a headshot photo of himself. 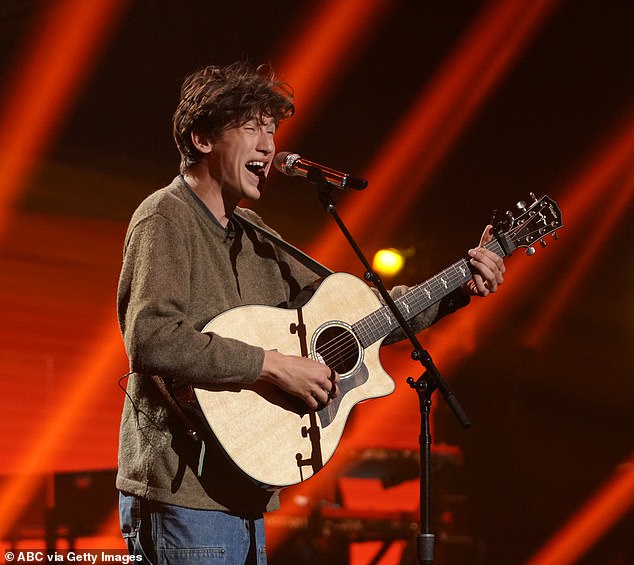 Breaking silence: Wyatt Pike, 20, spoke out for the first time since he suddenly dropped out of season 19 of American Idol, which was announced during Monday’s episode

Showing class following his bittersweet exit, Pike also gave a nod of respect to the rest of the competitors, as well as all the fans who cheered him on during his run on the Idol stage.

‘Fellow contestants – miss you all, good luck! Thank you to everyone for your support… do stick around for more musical things soon!’ he ended the post.

Pike made it all the way to the Top 16 and even performed in the final pre-recorded episode before the live shows began.

The three judges — Katy Perry, Luke Bryan and Lionel Richie — gave him a glowing review of his version of Kings of Leon’s song Use Somebody. He would qualify for the Top 12, but by then he had already made his decision to step away from the show. 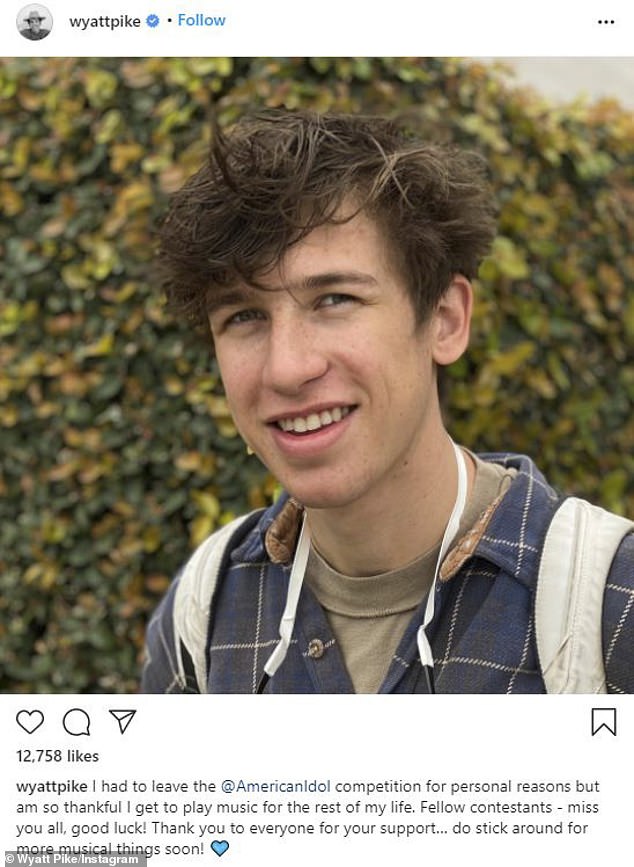 Wave of support: Alanis Sophia was among a number of Idol contestants to comment of Pike’s revelation that he left the show due to ‘personal reasons’

Wave of support: Idol wannabe Madison Watkins focused on Pike’s future in music in her post

It didn’t take long before a number singers from the Top 16 took to Instagram to share their thoughts and encouraging words of support for Pike.

‘Wish you the best of luck in everything you do,’ Alanis Sophia wrote.

You could feel the enthusiasm when Madison Watkins posted: ‘You are so special Wyatt- JUST THE BEGINNING BABY!!!! Can’t wait to see you soon. You are A GEM in every [sense] of the word.’

Beane kept it simple and sweet and wrote, ‘Love you so so big’, while Cassandra Coleman shared, ‘I love you and miss you so much!!!! So excited for your future.’

And Grace Kinstler added, ‘So much love for you Wyatt!!! You are going to do AMAZING things; I cannot wait to watch it all unfold for you!!’

Competition weigh in: Beane showed some big love for Pike in his departure 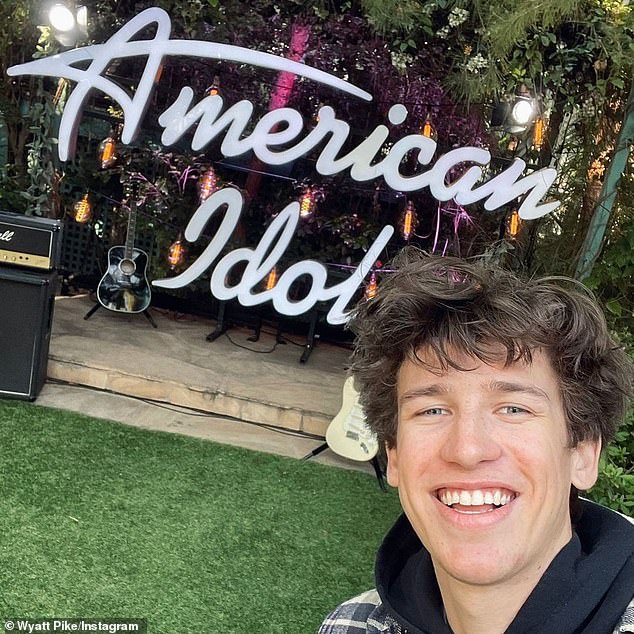 Surprise! American Idol host Ryan Seacrest kicked off Monday’s episode with the announcement that Pike had left the show, although he didn’t give any explanation

American Idol host Ryan Seacrest kicked off Monday’s episode with the announcement that Pike had left the show, although he didn’t give any explanation.

‘Before we get to the results, I have to tell you that finalist Wyatt Pike will not be competing in the competition. He had to drop out, but we wish him the very best,’ Seacreast said to the live audience.

Just five days before Seacrest shared the news, Pike posted a photo on Instagram of a visit he took to his hometown of Park City, Utah.

‘Something to feel this through: home. Thankful for the rollercoaster I’m on today,’ he declared in the caption.

At this point it’s unclear whether the visit has any connection to his departure. 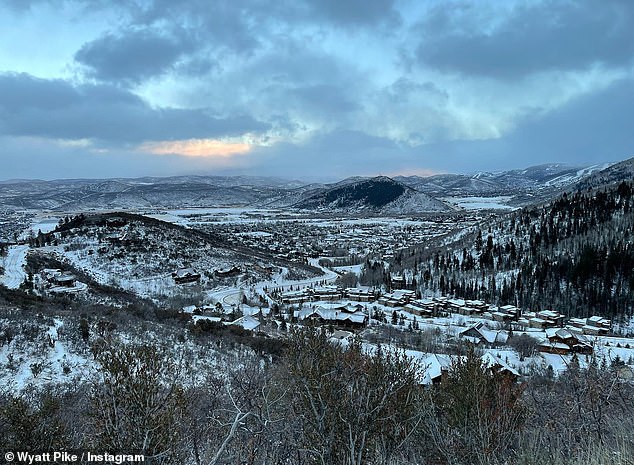 Home bound: Just five days before Seacrest’s announcement, Pike posted a photo on Instagram of a visit he took to his hometown of Park City, Utah 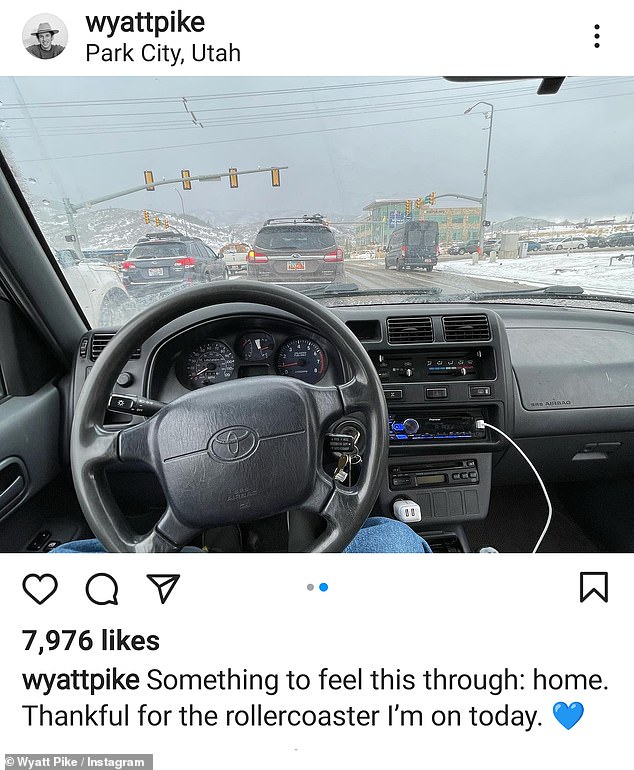 ‘Rollercoaster’: Pike returned home before Monday’s announcement that he had left the show

Boots is facing fresh uncertainty after its US owner abandoned plans to sell the business — but left the...

B.B. learned his first three chords from an electric guitar-playing minister at the Pentecostal Church of God in Christ...

Boots is facing fresh uncertainty after its US owner...
Sport

Follow us on Telegram for the latest updates: ...
Movies

B.B. learned his first three chords from an electric...
News

How many Americans did former President Trump pull into...
Celeb Zone

He’s the society fixer at the heart of the troubling...
Gossips

Last week, I jetted off to cloudier climes via...
News

The X-Men films had a relatively humble start...
- Advertisement -