Angelina Jolie seemed to turn to an old flame amid her ongoing custody battle with Brad Pitt.

The actress, 46, was spotted leaving her ex-husband Jonny Lee Miller’s apartment in the Dumbo neighborhood of Brooklyn on Friday June 11, following an intimate dinner and night cap.

The two were married in 1996 after meeting on the set of their movie Hackers a year prior, but separated shortly after and officially divorced in 1999. 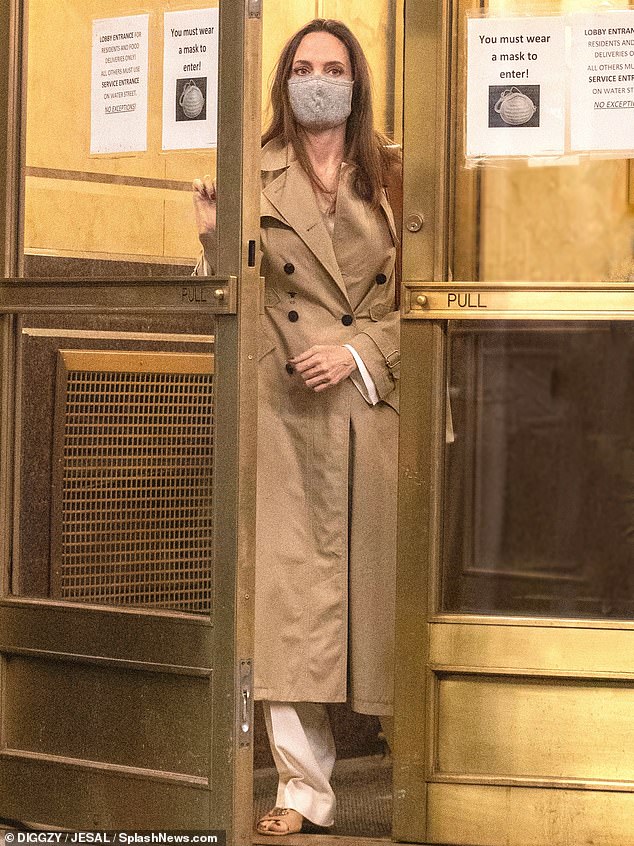 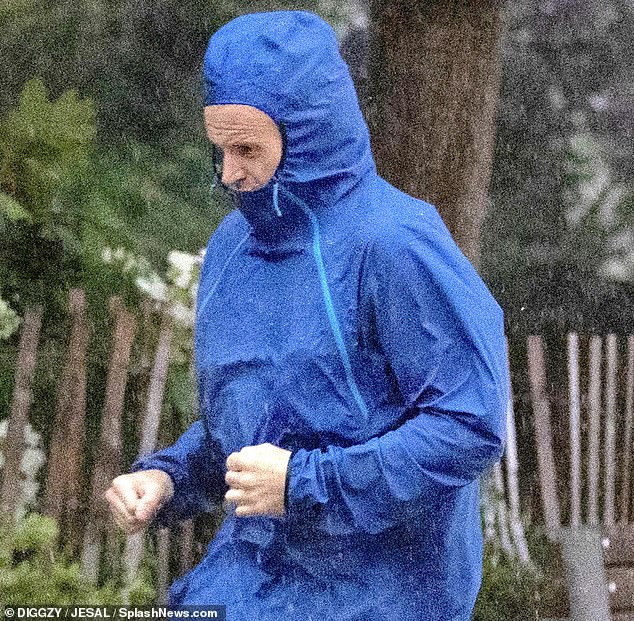 Late night rendezvous: Following their evening together, the actor of Trainspotting fame was spotted going through a rainy morning jog in his neighborhood

Jolie was seen arriving to the apartment alone and without security on Friday evening in a nude trench coat and a pair of elegant white pants, which she paired with kitten heels.

She carried an expensive bottle of Peter Michael wine with her and a Louis Vuitton bag, and spent about three hours inside where the pair reportedly enjoyed dinner.

The Girl Interrupted star was then spotted exiting the premise at 10:30PM where she tried to remain inconspicuous, despite her unmistakable beauty.

And the following morning Miller was seen going for a jog in the rain around the neighborhood. 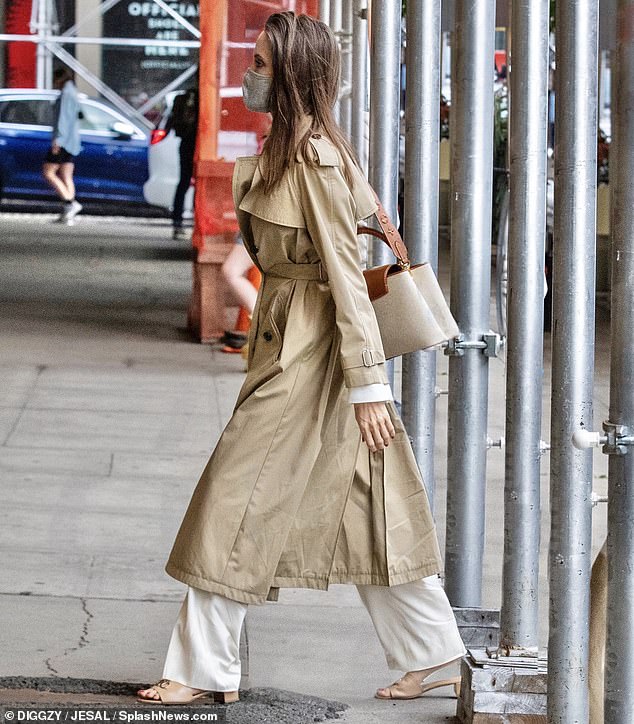 7:30PM: The actress arrived around 7:30 with an expensive bottle of Peter Michael wine in hand and wore elegant white pants under a nude trench coat 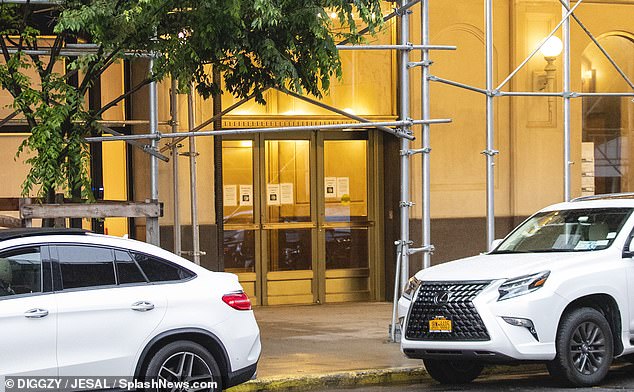 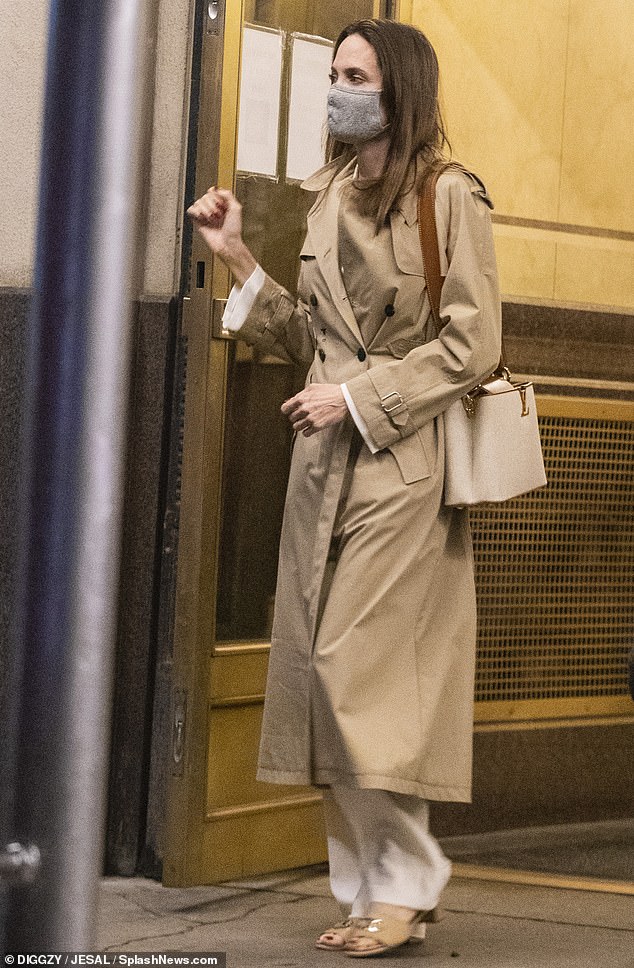 The British-born actor, 48, donned a blue windbreaker which was pulled up to his nose and a pair of black shorts which exposed his leg tattoo.

Though Angelina is based in Los Angeles, she was said to be in NYC for a belated birthday trip where she was joined by all seven of her children.

And as the pair share two decades worth of history, she seemed to want to see him while on the east coast.

They first met on the set of Hackers in 1995 and swiftly fell in love. At the time of their 1996 nuptials, Angelina was just 20-years-old and their wedding made headlines for its oddities. 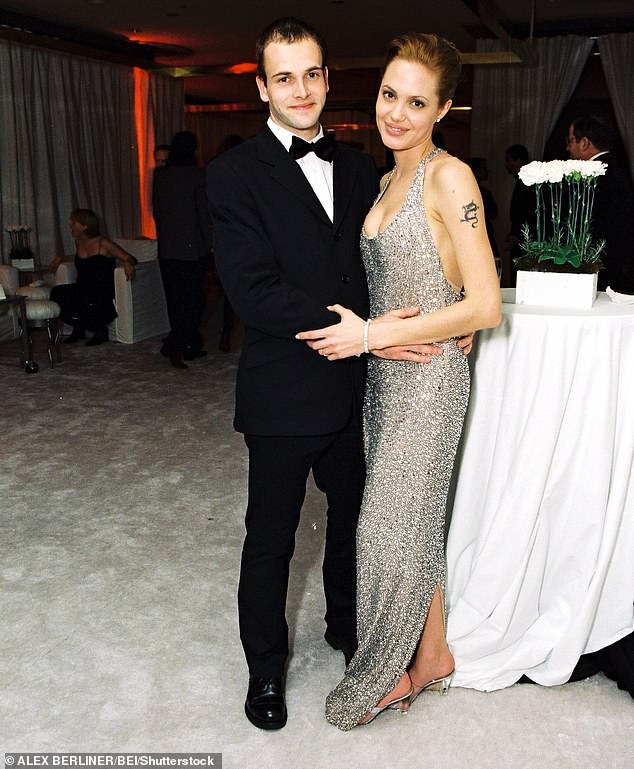 Swift marriage: The pair married after meeting on the set of Hackers, and she wore a T-shirt with his name written in her own blood for their wedding; pictured 1999

Low profile: Following the former pair’s late night rendezvous Miller was spotted going for a jog in the rain where he flashed his leg tattoo 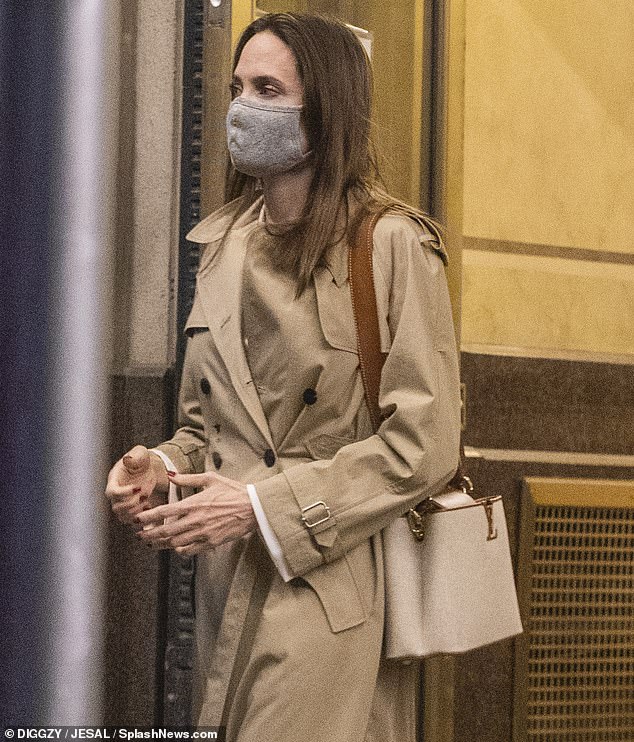 Instead of a wedding dress Jolie wore a pair of black rubber pants and a white T-shirt which had the Trainspotting actor’s name written in her own blood.

She later said that the blood was supposed to represent a willingness to sacrifice for their love and shared that she drew the blood herself with a surgical needle.

‘It’s your husband. You’re about to marry him. You can sacrifice a little to make it really special,’ she told the New York Times in an interview.

But after marrying she told the publication that she felt like being married caused her to ‘lose [her] identity,’ in a way. 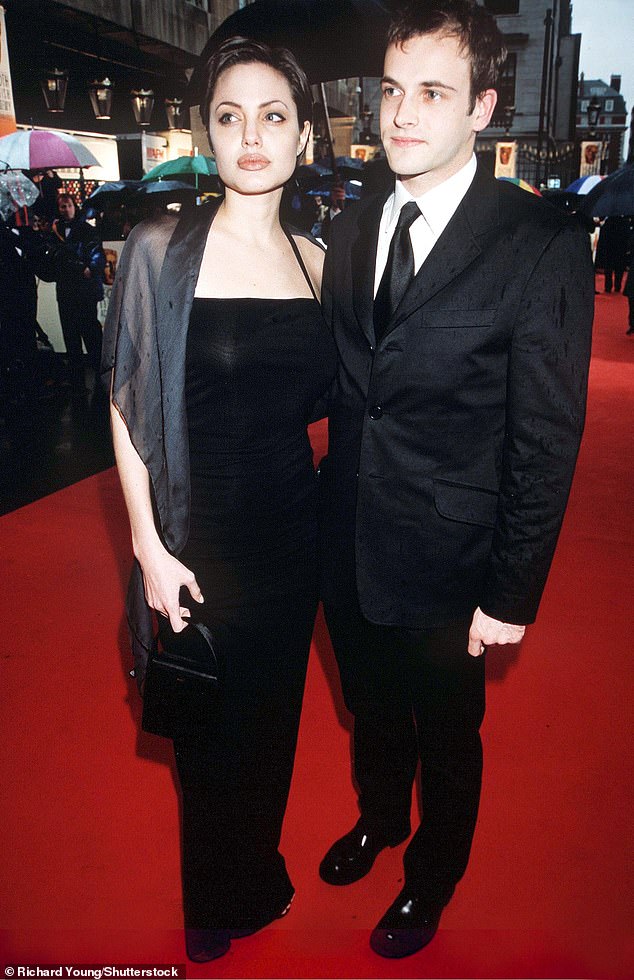 Sacrifice: ‘It’s your husband. You’re about to marry him. You can sacrifice a little to make it really special,’ she told the New York Times of her decision to draw her own blood for the wedding; pictured 1998 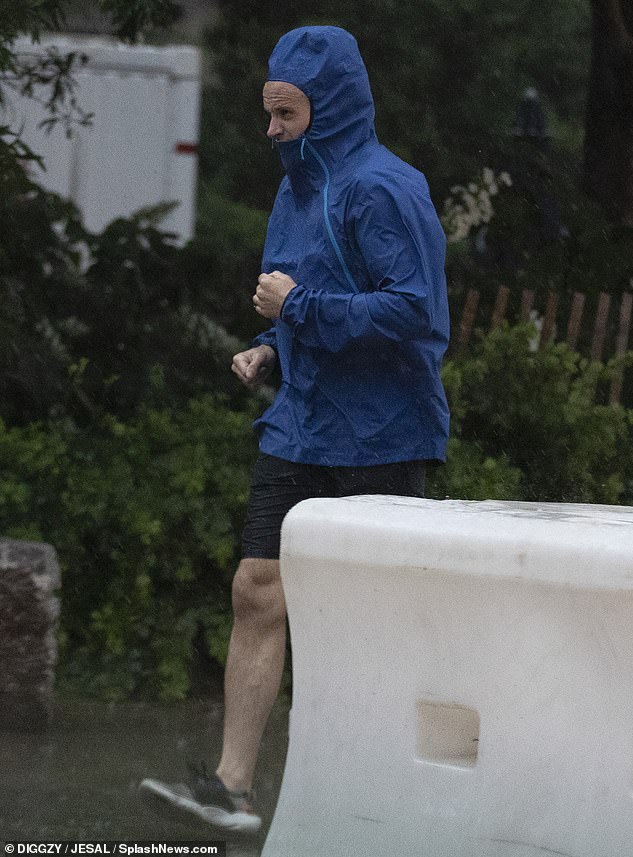 Losing herself: After the pair’s wedding she said that she felt like being married caused her to ‘lose her identity’ in a way

‘It was weird to immediately be married, and then you kind of lose your identity. You’re suddenly somebody’s wife. And you’re like, “Oh, I’m half of a couple now. I’ve lost me.”‘

‘We went on some morning show, and they threw rice on us and they gave us toasters. I was thinking, “I need to get myself back,”‘ she elaborated at the time.

The pair separated in 1997 after their busy schedules caused them to be apart from each other. The divorce was official in 1999 but they still remained friends. 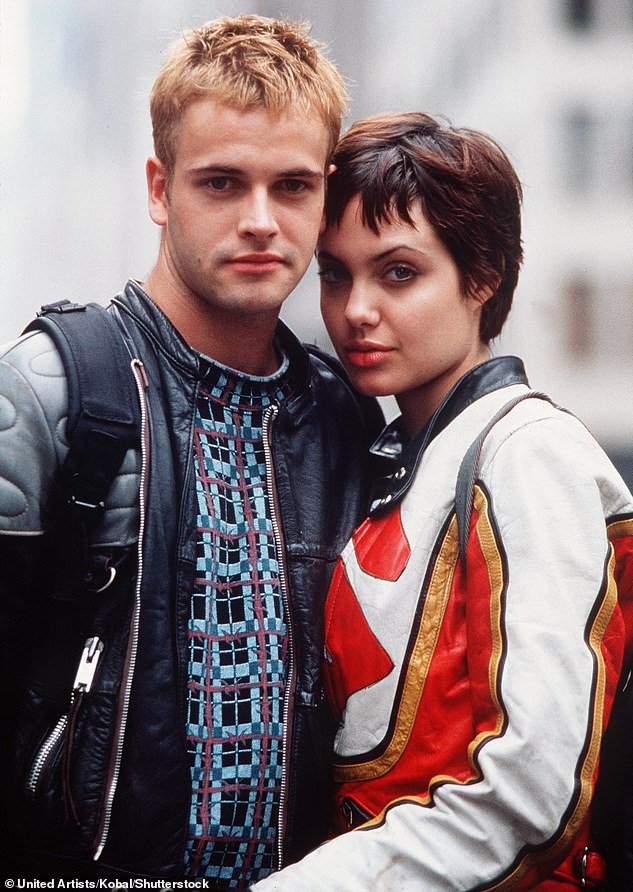 Young love: The actors swiftly fell in love on the set of Hackers in 1995 and they married in a small ceremony surrounded by her mother and their close friends; pictured in Hackers

And she also shared at the time of their divorce that she thought they could get ‘married again’ in the future.

‘I wanted more for him than I could give. He deserves more than I am prepared to give at this time in my life, but there is a very good possibility that we could get married again some time in the future.’

Though she said divorcing Jonny was ‘the dumbest thing I’ve ever done,’ he expressed no regrets over their years together.

‘There are no regrets and no bitterness. Marriage was something that didn’t work out, and I had to make the decision sooner or later. I decided to make it sooner,’ he told Heavy.com.

The actor later went on to marry Law & Order star Michele Hicks, but they split after a decade together in 2018.

Rekindling? As Jolie had called divorcing Jonny ‘the dumbest thing I’ve ever done,’ she didn’t rule out that the two could get married ‘in the future’

Angelina went on to marry Billy Bob Thornton in 2000 where both wore vials of each other’s blood around their necks, but they divorced just two years later.

She filed for divorce in 2016 citing ‘irreconcilable differences’ and it was finalized in 2019. The former pair have been in a lengthy custody battle with Jolie wanting sole custody and Pitt fighting for joint.

In May a court awarded joint custody to Pitt which left her ‘bitterly disappointed’ according to Us Weekly. She is set to appeal the decision ‘to  demonstrate clear, reversible, prejudicial legal error,’ on behalf of the judge — who she tried to remove from the case entirely — and a hearing is set for July 9. 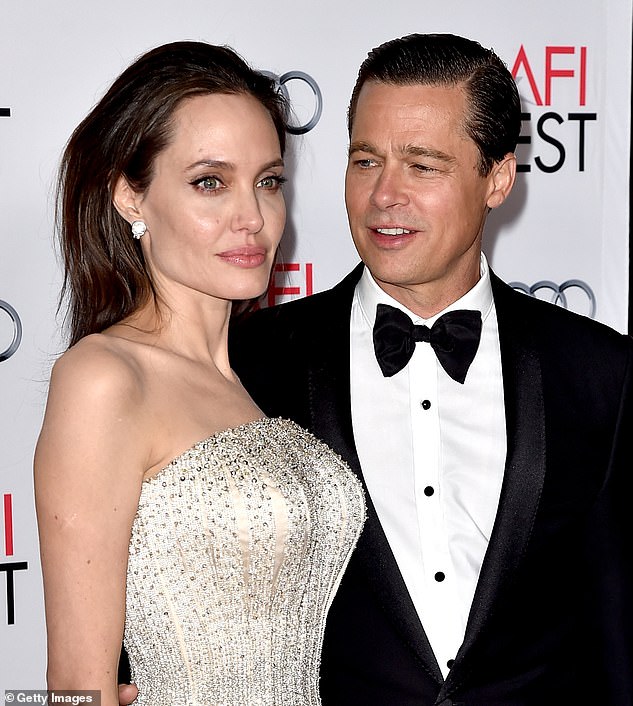 Bitter battle: The former couple have been warring over custody of their seven kids and an appeal to the judges May ruling is set to be appealed by Jolie in a July 9 hearing; pictured 2015 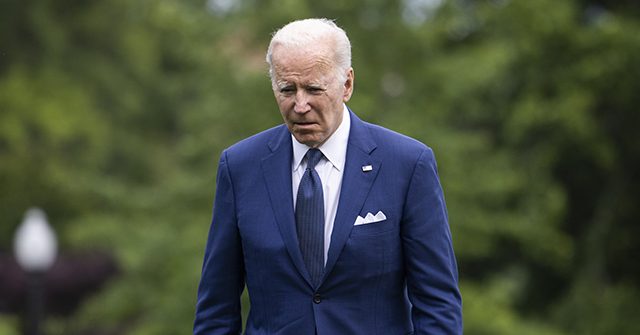 Productivity crashed over the past year as the economy added workers at a rapid clip even as economic output grew slowly, data from the Department of Labor showed on Tuesday. The productivity of the business sector fell 2.5 percent compared with a year ago, the largest decline ever recorded in data going back to the… 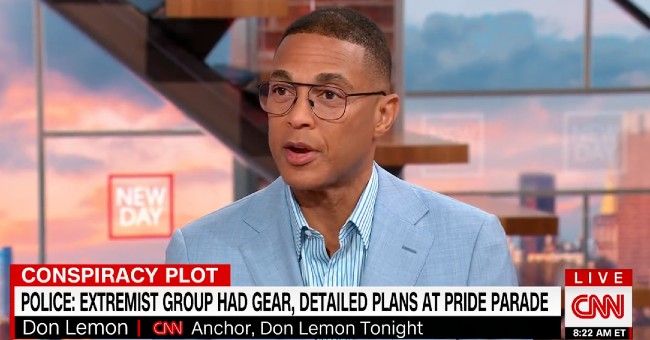 So, a weird thing happened on CNN on Wednesday when Don Lemon was interviewed on CNN’s morning show, “New Day.” There wasn’t anyone else they could ask about white nationalists or a Pride parade? “They have co-opted this term ‘patriot’ to mean something that has really just bastardized the term.” CNN’s @donlemon speaks with anchors… 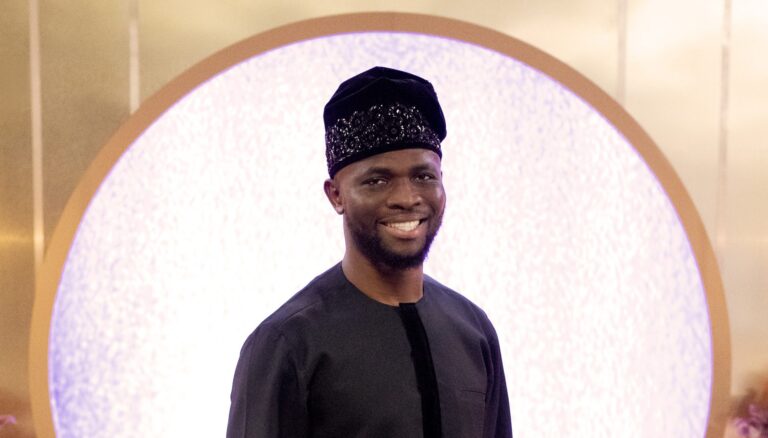 In the wake of scandalous cheating allegations and a high-profile breakup, Sikiru “SK” Alagbada is speaking out in an effort to clear his name. As we previously reported, Love Is Blind stars SK and Raven Ross recently announced their decision to part ways. The pair were featured on season 3 of the hit Netflix series, and they… 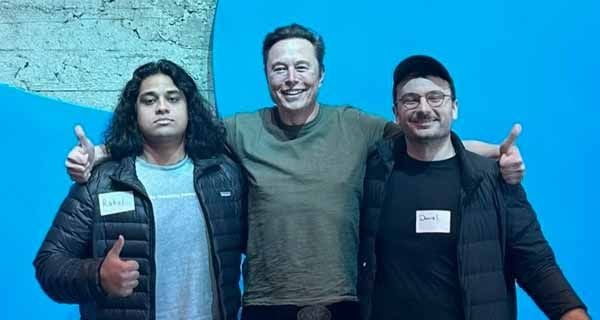 Word on Twitter tonight is that Twitter is dead and is going to shut down anytime now. Pundits are posting links to where you can find them once Twitter’s gone. They’re lamenting what a great conversational space Twitter used to be. But Elon Musk, in his search for workers who were willing to actually come… 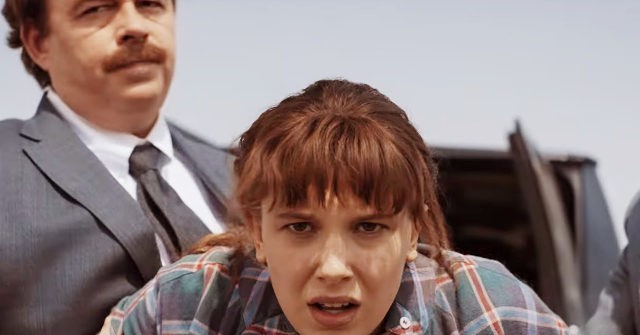 Netflix has added a content warning ahead of the fourth season of Stranger Things following the horrific shooting in Uvalde, Texas, that left 19 children dead along with two teachers. The disclaimer that will appear during Friday’s premiere will say that the show will contain violent content involving children in the first scene, according to…