Aussies flock to man’s home after he drew a ‘hug here’ sign on pavement in Surry Hills, Sydney

Pedestrians have been randomly embracing each other after a resident chalked ‘hug here’ on a path outside his home.

Social media footage of passersby stopping to hug on the spot in a street in Surry Hills, Sydney has gone viral, attracting 1.2 million views so far.

The man who created the heartwarming street scene, Paul Grech, told Daily Mail Australia the video is one of two that have gone viral globally, attracting a slew of kind comments. 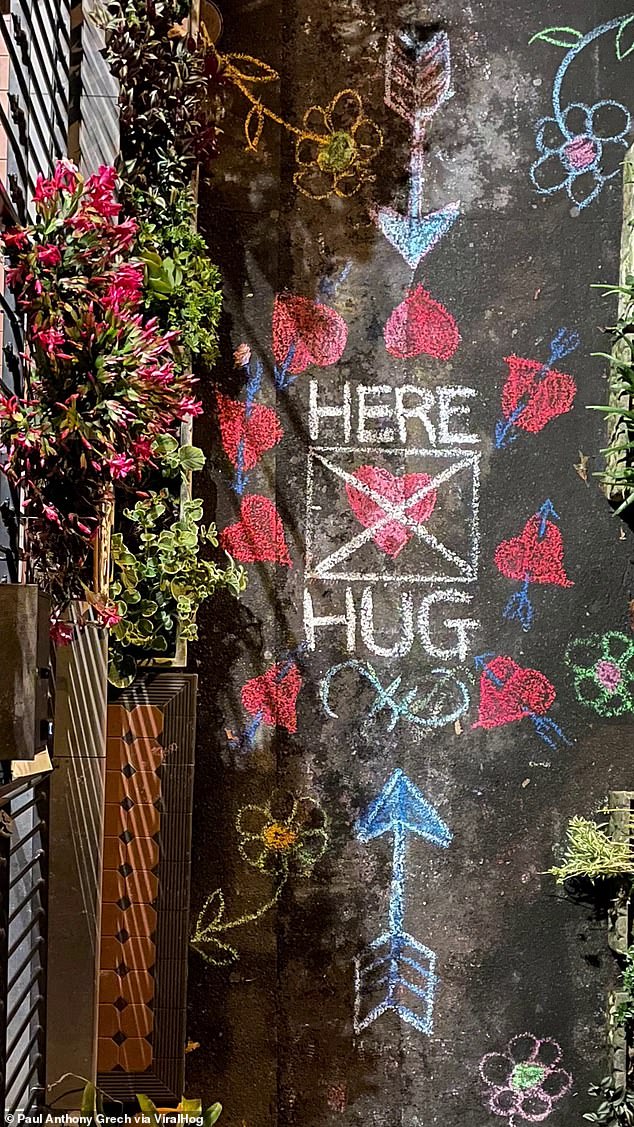 The ‘hug here’ spot, chalked out by Mr Grech, drew thousands of social media comments as members of the public stopped in their tracks to embrace – throughout the day and night 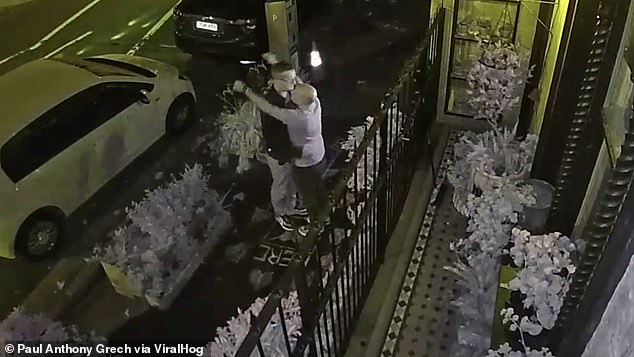 Two men embrace outside Mr Grech’s home, as part of his ‘social experiment’ 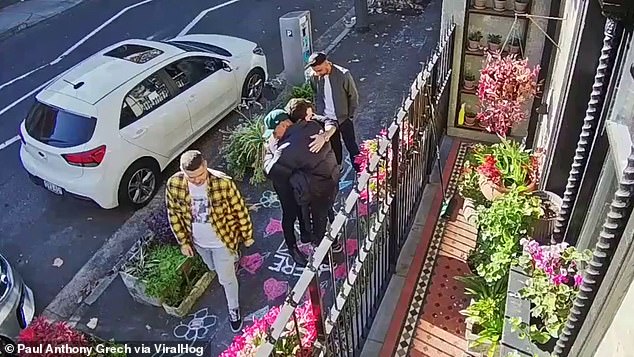 TikTok users from around the world were overjoyed to see people stopping to hug (pictured) on the Sydney street, with some saying it was ‘wholesome’ and ‘adorable’ footage

‘I did videos on TikTok, just mucking around … and these videos have gone crazy all around the world, been getting all sorts of comments in all different languages.’

He also attracted attention from a video distributor in the US, who wanted to sign a contract with him.

Footage of the ‘hug here’ video was taken with a motion camera and caught different people cozying up together.

Inspiration for the stunt came when Mr Grech was sitting outside his house one morning watching people passing by.

‘Everyone was just walking past with their heads down on their mobile phones, or with their coffee in their hands – and I just thought ‘I wonder if I can do something here,” he said.

‘Maybe people would do something silly, like snap out of their mobile phones … I did it as a social experiment really.’

His first idea saw him draw a hopscotch on the pavement, which prompted walkers -from elderly women to young kids – to hop on the traditional kids’ outdoor game.

One family stood in a line as they each took turns, and Mr Grech could even hear the stomping sounds in the dead of night. He had to wash it off as it kept him awake.

The footage of this went viral, and so he came up with the ‘hug here’ spot.

Within minutes of him chalking the words and setting up his video, two men stopped and hugged on the spot for a lengthy period of time. 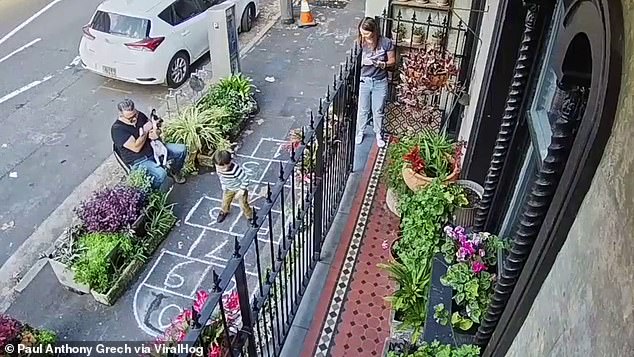 One hugging moment that surprised the auctioneer was when a group of young men stopped to give each other hugs.

‘A lot of people are saying all around the world it is so nice to see guys, mates, stopping there and give themselves a hug,’ Mr Grech said.

One commenter to the post said, ‘my favorite thing is the dudes hugging it out’, while another said, ‘so nice to watch people just hug and show love to one another, especially the men’.

Other words to describe the interactions were ‘adorable’ and ‘wholesome’.

One joker wrote, ‘imagine someone from above drops water on that spot’.

In terms of any new ideas for the future, Mr Grech said ‘my mind is ticking, believe me… watch this space’. 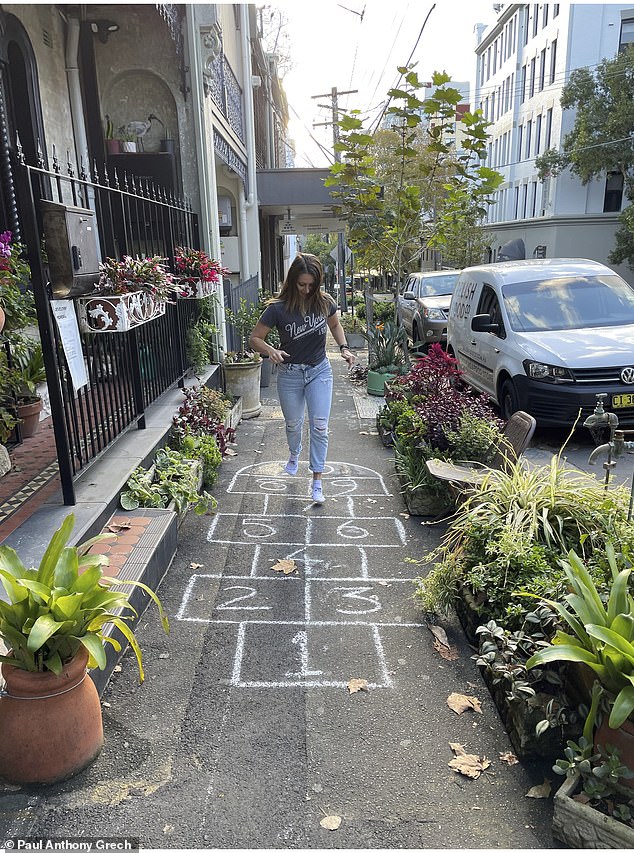 Mr Grech wanted people to stop looking at their phones or coffees, and have a play on the hopscotch outside his house (pictured) in Surry Hills, Sydney 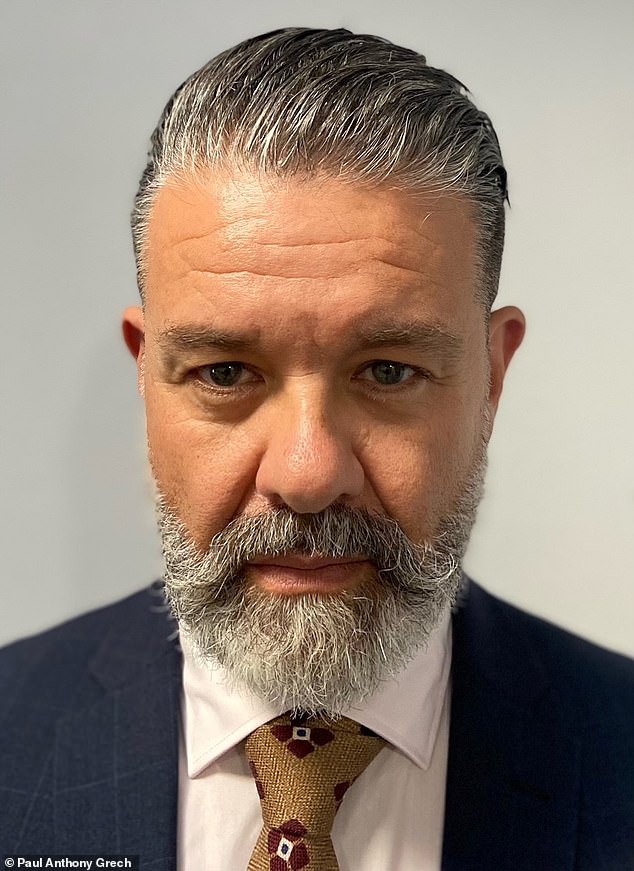 Paul Grech (pictured), an auctioneer,  is keen to add more to his street TikToks after he received a couple of million views for both hopscotch and ‘hug here’ videos

Bill Gates has a new book titled âHow to Prevent the Next Pandemic,â and in it he envisions a...

British model Kate Moss will testify that her ex-boyfriend Johnny Depp ‘caught her and tended to her’ after she...
- Advertisement -

No, David Perdue Is Not Related To Perdue Chicken- Quick Response To The Call For A Boycott And More Facts

Is David Perdue connected with Perdue Chicken? Here is all that you want to be familiar with it.David Perdue...

Monkeypox could become endemic in Europe if it spreads to PETS: Health chiefs stark warning

Monkeypox could spread to pets and wildlife and become endemic in Europe, health officials warned yesterday.Experts on the Continent...

A standing ovation is one thing. An eight-minute standing...
News

Bill Gates has a new book titled âHow to...
Bio

No, David Perdue Is Not Related To Perdue Chicken- Quick Response To The Call For A Boycott And More Facts

Is David Perdue connected with Perdue Chicken? Here is...
News

Monkeypox could become endemic in Europe if it spreads to PETS: Health chiefs stark warning

Monkeypox could spread to pets and wildlife and become...
Celeb Zone

Channing Tatum and Jenna Dewan were among the hottest...

Back in January we learned that the Supreme Court...
News

The live-action movies however fully embraced the idea of...
Bio