Joe Biden’s pick to head the Bureau of Alcohol, Tobacco, Firearms and Explosives (ATF) was an agent involved in the Ruby Ridge standoff and Waco siege – and, it was revealed this week, he lied about Branch Davidian cult members shooting down two helicopters during the infamous standoff.

Chipman was a special agent with ATF for 25 years, including during the Waco massacre in 1993. 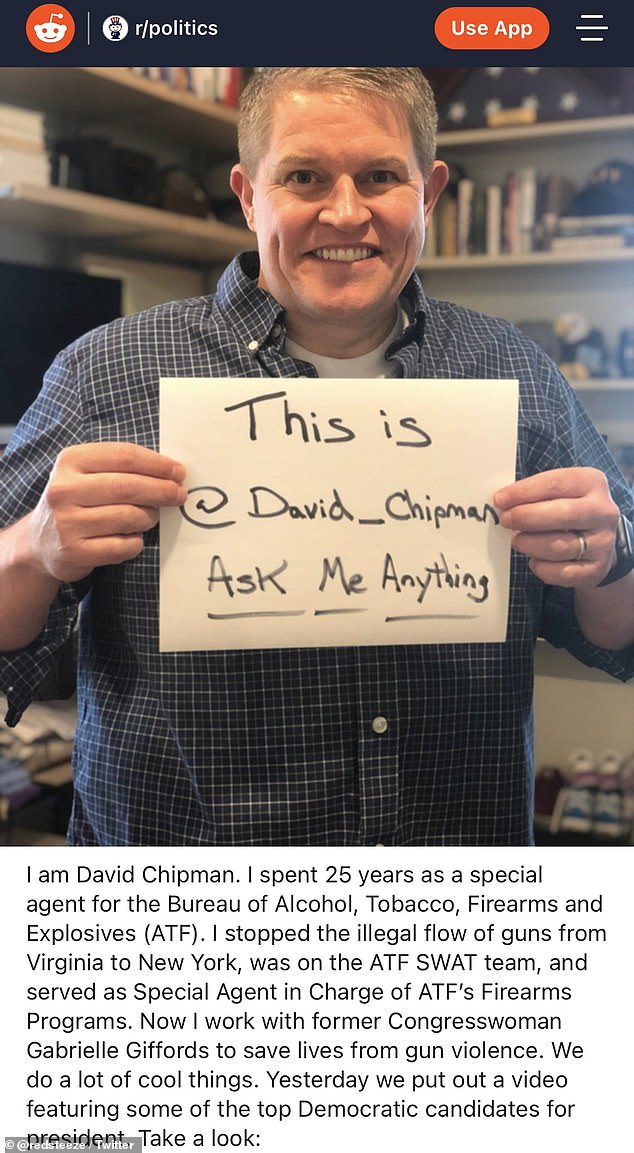 Joe Biden’s pick to head the Bureau of Alcohol, Tobacco, Firearms and Explosives (ATF) David Chipman hosted an ‘Ask Me Anything’ Reddit thread last year where he is revealed to have lied about aspects of the Waco Massacre 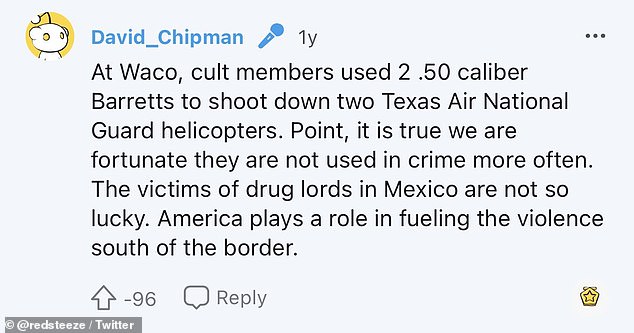 He claimed that Branch Davidian cult members were able to shoot down to U.S. helicopters with .50 caliber Barretts – even though this event never happened during the standoff 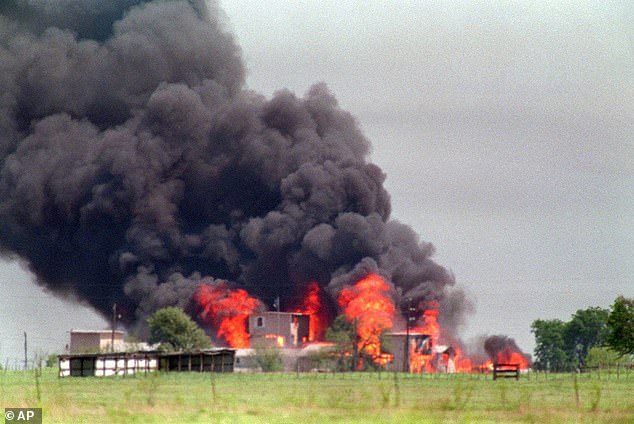 Massive fires were set to the Branch Davidian religious sect’s ranch in Waco, Texas after ATF showed up with a search and siege warrant for reported illegal firearms and weapons in the facility

The government agencies’ handling of the incident, which started with a simple search warrant of the cult’s ranch, quickly became the subject of major criticism after 76 Branch Davidian members and five ATF agents were killed – 16 other agents were injured.

During a Rose Garden announcement on Thursday of upcoming gun control executive actions, President Joe Biden confirmed that Chipman is his pick to head the ATF.

As a nominee, it’s unusual that Chipman’s official Twitter page is set to private.

Chipman is currently a senior policy advisor for the gun control advocacy group Giffords. The law center was founded by former Arizona congresswoman Gabby Giffords, who was shot in the head during a 2011 assassination attempt.

Giffords was present at Biden’s gun control event on Thursday.

Notably, Chipman falsely claimed in a 2020 Reddit post that during the Waco standoff between Branch Davidian religious sect members and ATF agents that cult members shot down two helicopters – something that blatantly did not happen.

The Reddit thread, known as an ‘Ask Me Anything’, shows an image of Chipman holding up a paper inviting people to ask him questions about topics related to his gun control advocacy and time as an ATF agent. 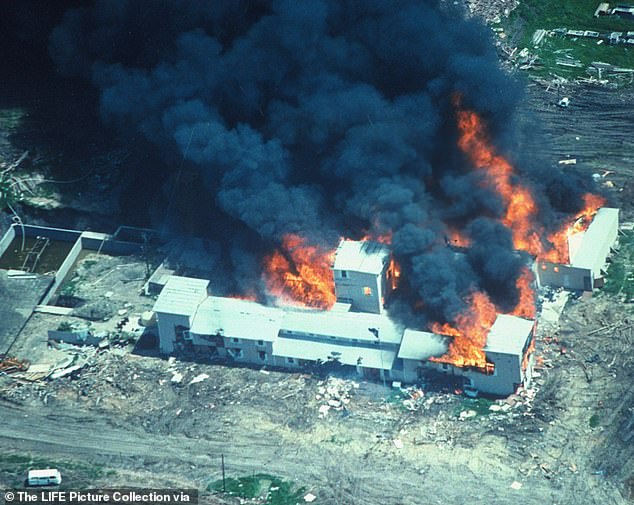 ‘I am David Chipman. I spent 25 years as a special agent for the Bureau of Alcohol, Tobacco, Firearms and Explosives (ATF),’ the user wrote in the introductory Reddit post.

‘I stopped the illegal flow of guns from Virginia to New York, was on the ATF SWAT team, and served as Special Agent in Charge of ATF’s Firearms Programs,’ the poster continued. ‘Now I work with former Congresswoman Gabrielle Giffords to save lives from gun violence.’

In one answer during the ‘AMA’, Chipman said during the ATF standoff with the Branch Davidians, ‘cult members used 2 .50 caliber Barretts to shoot down two Texas Air National Guard helicopters.’

While it’s plausible these powerful rounds could take down helicopters, none were shot down during the standoff.

Branch Davidians did, however, fire rounds and made impact with the deployed helicopters. No crew members were injured and the aircraft immediately stopped the mission and landed safely.

It is a violation of the law for U.S. agents to fire on civilians from helicopters.

It also appears that Chipman was involved in his capacity as an ATF agent in the 1992 Ruby Ridge standoff near Naples, Idaho. 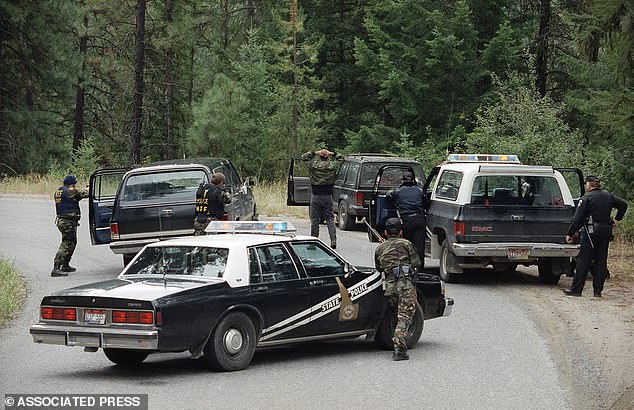 The event started because a man, Randy Weaver, received three conflicting court dates for a bench warrant related to firearms charges. He suspected there was a conspiracy against him and refused to surrender when government agents came down on him.

The FBI, U.S. Marshals and ATF all became involved.

Ultimately, Weaver’s 14-year-old son, his wife Vicki and their dog were all killed by Marshals and FBI agents. Eventually, Weaver and his three daughters surrendered after an 11-day standoff.

President of the National Association for Gun Rights Dudley Brown noted concerns regarding Chipman’s role as a case agent for ATF in the Branch Davidian trial while he was based at the Waco field office.

‘David Chipman has been on the leading edge of ATF scandals for decades, all the way back to Waco – and now he shills for gun confiscation with Gun Control Inc.,’ Brown told Fox. ‘Chipman has embraced every hair-brained gun control scheme proposed, so of course Biden and Harris chose him – he’ll fit right in with their corrupt administration.’

The ATF is a law enforcement agency within the Justice Department, which is led by Attorney General Merrick Garland. The agency’s goal is to safeguard the public from criminal organizations and activity, like the illegal use and trafficking of firearms.

Rylan Clark has revealed his mother thought he was on drugs after she discovered two lines of white powder...
- Advertisement -

Rylan Clark has revealed his mother thought he was...
Entertainment