Biden gets his Pfizer COVID booster shot live on camera

‘I know it doesn’t look like it, but I am over 65 – way over. And that’s why I’m getting my booster shot today,’ the president said speaking from a podium in the South Court Auditorium, before he rolled up his sleeve.

And first lady Jill Biden, 70, also got her vaccine booster on Monday at the White House but she received hers behind closed doors.

‘The First Lady received her booster shot this afternoon in the White House,’ her spokesperson Michael LaRosa said in a statement.

Biden, during his remarks, again shamed Americans who refused to get vaccinated, saying they accounted for about 23 per cent of the eligible population.

‘And that distinct minority is causing an awful lot of damage for the rest of the country,’ he said. ‘This is a pandemic of the unvaccinated,’ he repeated.

The president said he didn’t have any side effects when he received his first and second doses of the Pfizer COVID-19 vaccine.

‘And I don’t anticipate one now,’ he said of his booster, seated and ready to receive his jab. 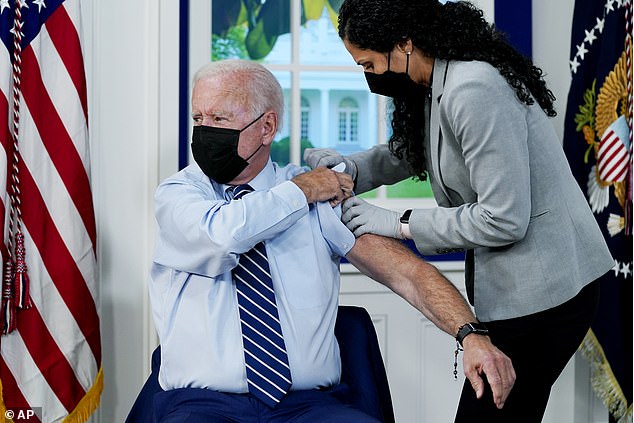 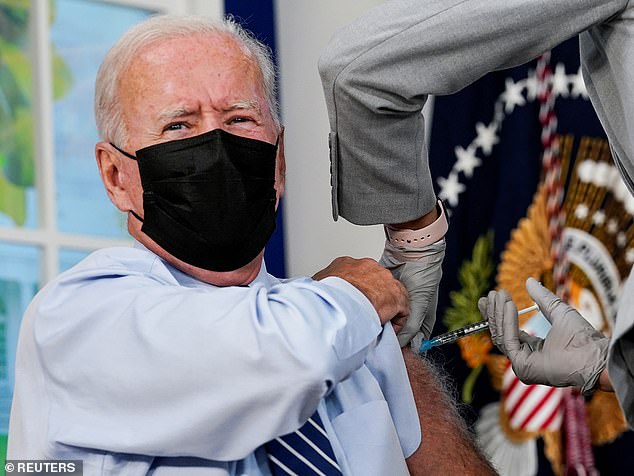 The president joked about being ‘way older’ than 65, which makes him eligible to get a Pfizer booster 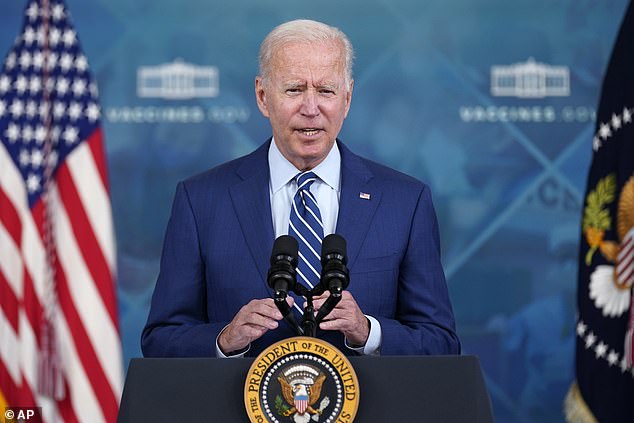 Biden took off his blue suit jacket and got help rolling up his long sleeve button-down shirt.

He talked to reporters through getting his booster.

Last week, White House press secretary Jen Psaki pledged that Biden would get the shot in front of cameras.

‘But all kidding aside, I’ll be getting my booster shot,’ Biden said. I’m not sure exactly when I’m going to do it – as soon as I can get it done.’

On Monday, the White House sent out an updated schedule – announcing the jab.

Biden previously had no public events.

During a Q&A with reporters as he was getting his shot, he pushed back on criticism from World Health Organization officials and others who say wealthy countries should be giving vaccine doses out to poorer countries instead of giving boosters to their citizens.

‘We are doing more than every other nation in the world combined,’ Biden said. 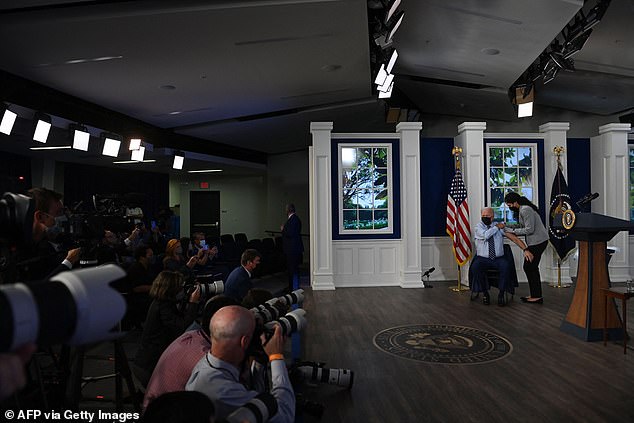 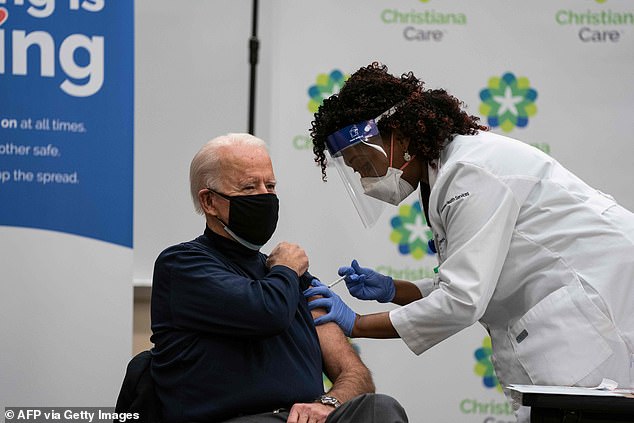 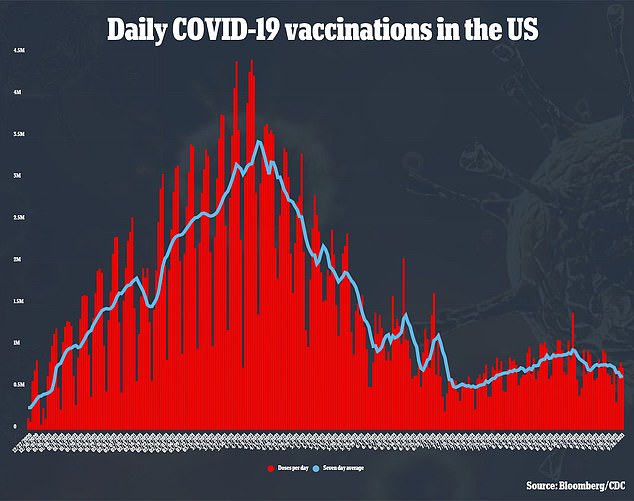 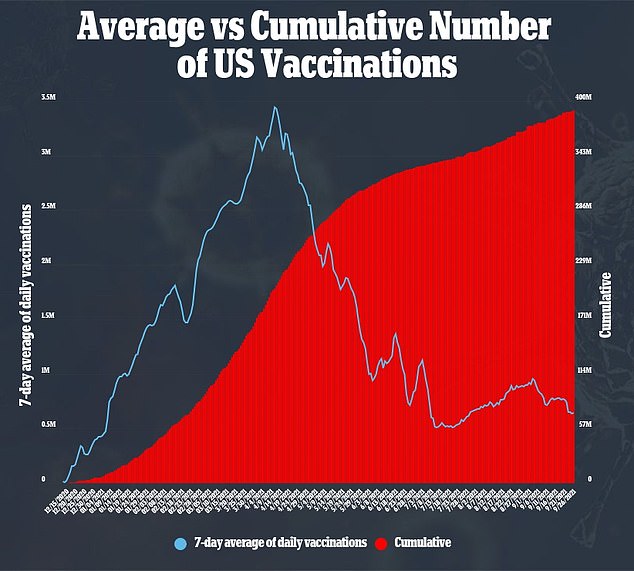 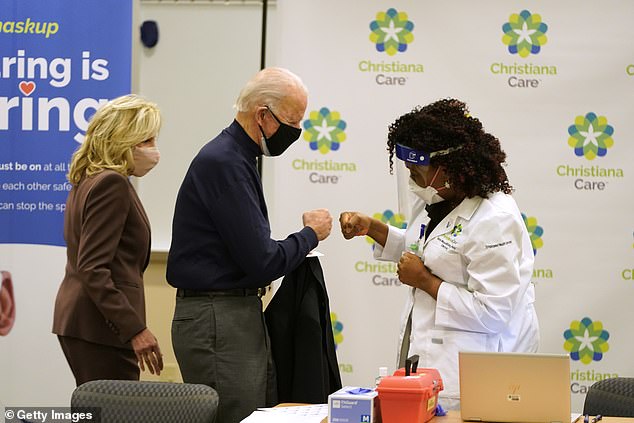 Biden will have Tuesday to recover as he’s traveling to Chicago for a COVID-19 event on Wednesday.

The Food and Drug Administration authorized booster shots for Americans who received Pfizer doses if they’re older than 65 or at high risk for severe infection – including those whose occupations put them at high risk.

A Centers for Disease Control and Prevention advisory committee recommended that boosters not be made available to those put at-risk at work, but CDC Director Rochelle Walensky overruled them.

Americans eligible for boosters should get them six months after they were fully vaccinated for COVID-19.

Booster shots for Moderna and Johnson & Johnson vaccines have yet to be rolled out.

The Bidens were among some of the first Americans to get COVID-19 vaccines.

The president and first lady received their first COVID-19 Pfizer doses on December 21 and second doses on January 11 – nine days before Biden was sworn-in.

The then president-elect had cameras watch him get the shots.

Jill Biden opted to get her jabs off-camera.

Biden has made a point to get his shots in public to show that the COVID-19 vaccine is safe.

His predecessor, former President Donald Trump, decided against getting vaccinated on TV, quietly getting his doses before leaving office in January.

Trump was hospitalized for COVID-19 in October, a month before the presidential election.

The Republican has touted his administration’s Operation Warp Speed – the public-private partnership to get a COVID vaccine swifly developed – but has allowed anti-vax sentiment on the far-right to bloom, by saying that people have the freedom to choose whether or not to be vaccinated.

‘I’m very proud of it. I saved millions of lives – but people have to have their freedoms,’ Trump said earlier this month.

Trump, 75, also said in early September that he ‘probably won’t’ get a booster shot – despite being eligible due to his advanced age.

Senate Majority Leader Mitch McConnell announced on Monday afternoon that he had received his third shot, sharing a photo of Dr. Brian Monahan, the Attending Physician of the United States Congress, handing him his updated vaccine card, rather than an image of him getting the dose.

‘I’ve been a lifelong champion of vaccinations,’ the top Senate Republican said. 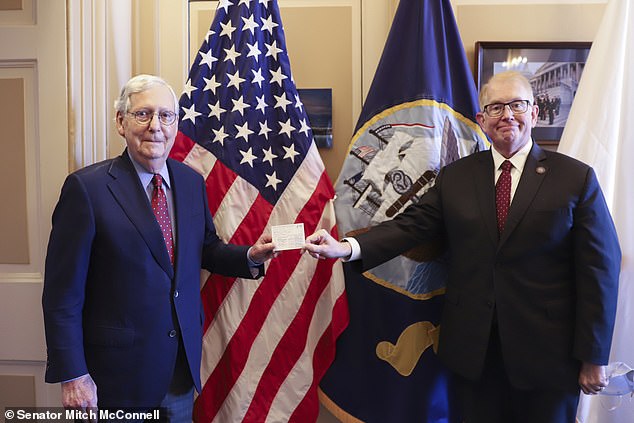 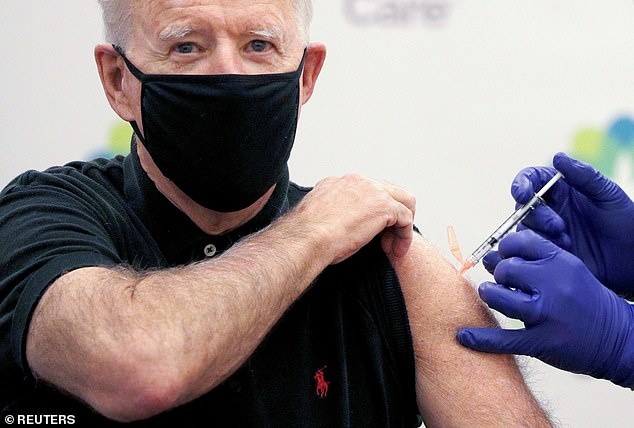 Then President-elect Joe Biden receives his second dose of the Pfizer vaccine on January 11, 2021, nine days before he was sworn-in

WHO IS ELIGIBLE FOR COVID-19 BOOSTER SHOTS AND WHEN SHOULD THEY GET THEM?

What are COVID-19 vaccine boosters?

A booster shot is given at least six months after people have been fully vaccinated against COVID-19.

It is meant to prolong immunity and give a ‘boost’ to the immune system to create higher levels of antibodies against the virus.

Not necessarily, although this topic is hotly debated.

Some people have weakened immune systems, either due to medical conditions or to age, that have left them unable to mount a full immune response to the first doses.

Some studies have found that vaccine protection does decrease after more than four months, which is common with several other immunizations.

However, health officials insist that vaccines are still highly effective against the most severe outcomes from COVID-19, including hospitalization and death.

Who is currently eligible?

These include people aged 65 and older, long-term care facility residents and people aged 18 to 64 at high risk of severe COVID-19 due to underlying medical conditions.

Although the Centers for Disease Control and Prevention’s (CDC) advisory committee recommended that boosters not be for people at high risk due to their jobs or other factors, CDC director Dr Rochelle Walensky overruled this decision and sided with the FDA.

This means people who are at high-risk of severe illness due to their occupations – such as healthcare workers, teachers and grocery store employees – and those who live in institutional settings that increase their risk of exposure, such as prisons or homeless shelters, are also eligible.

Which COVID-19 vaccine booster can I get?

Right now, only recommended groups who received two doses of the Pfizer-BioNTech vaccine, and were given their final shot at least six months ago, can get booster shots.

Pfizer’s booster shot is exactly the same – both ingredients-wise and dosage (30 micrograms) – as the first two doses.

What if I received the Moderna or Johnson & Johnson vaccine?

Moderna has submitted an application to the FDA asking that its booster shot be authorized while Johnson & Johnson is expected to do so soon.

Because of this, recipients of either of these two vaccines are not eligible to receive boosters yet.

President Joe Biden said on Thursday that scientists are still examining data for boosters shots from the two companies.

‘Our doctors and scientists are working day and night to analyze the data from those two organizations on whether and when you need a booster shot, and we’ll provide updates for you as the process moves ahead,’ he said.

Can I mix and match?

Currently, federal health officials do not recommend getting a booster shot made by a different vaccine manufacturer than that of your initial doses.

This means that Moderna and Johnson & Johnson recipients are not recommended to get a booster dose from Pfizer and vice-versa.

It seems blood isn’t thicker than water.Melissa and Joe Gorga were photographed returning home from a beach trip...

It seems blood isn’t thicker than water.Melissa and...
News

Visa and Mastercard have reportedly suspended card payments for...
News

Democrats are riding high right now, at least in...
Bio

Love Island fans were in hysterics over Dami’s ‘salty’...
Entertainment

Getty Kyle Busch is having a frustrating stretch of races....
News

A girl of 11 died at a water park...
Entertainment

On the day she disappeared in November 2017, teenager...
News

Senate Democrats just voted to raise taxes during a...
- Advertisement -