Even though Title 42 is no longer ending on Monday, Border Patrol is still ‘all hands on deck’ as they prepare for an influx of migrants in the next few weeks.

Migrants from Columbia, Honduras, Guatemala, Cuba and Nicaragua and continued to trickle over the southern border by way of the Rio Grande River in Eagle Pass, Texas on Sunday afternoon. The number of those crossing the border, however, is a much lower showing than in recent months at that particular crossing point.

A Texas National Guard soldier told DailyMail.com on Sunday in Eagle Pass that those patrolling the border are still anticipating influxes this week even though Title 42 will remain in place.

He said he isn’t sure migrants are even aware that the policy will no longer be lifted.

Some speculate that the less busy than usual crossing spot was due to Mexican police patrolling the Piedras Negras area on the Mexico side of the Rio Grande River on Sunday – and claim it did not particularly have any connection to changing Title 42 policies.

Others claim that migrants from Central America who have been waiting in Mexico for months decided they would cross on Monday and are not changing their plans even though policies in the U.S. are no longer altering. 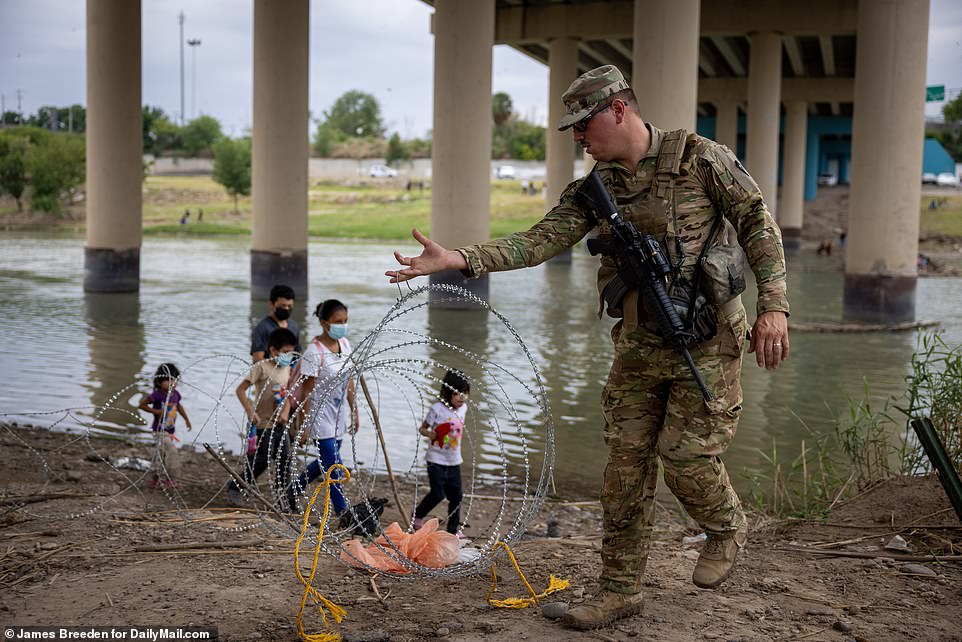 A Texas National Guard soldier moves a razor-wire barrier along the U.S. side of the Rio Grande River on Sunday, May 22, 2022 to allow migrants seeking asylum in the U.S. entry in Eagle Pass, Texas 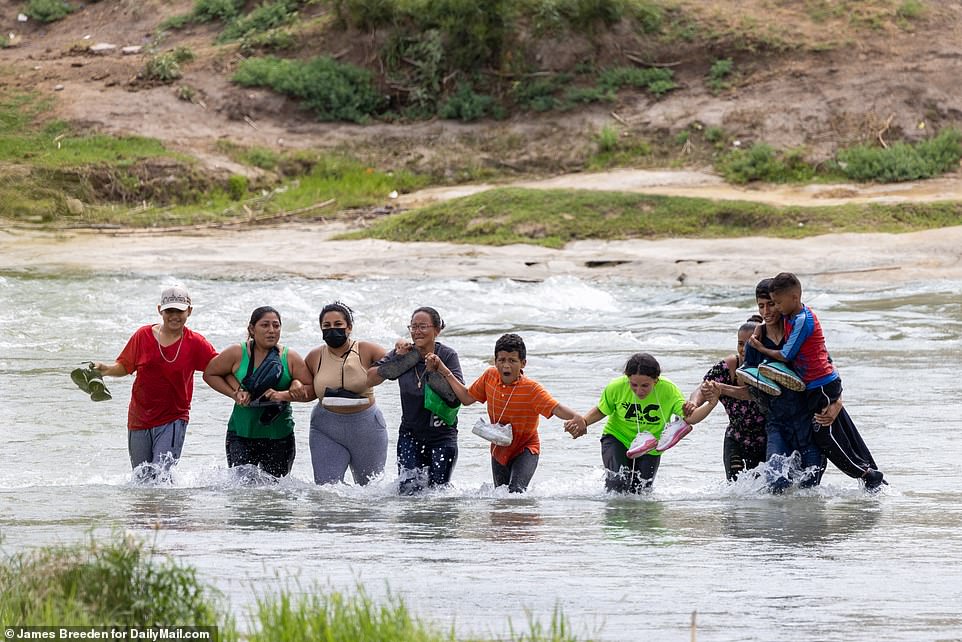 Title 42 is no longer set to end on Monday, May 23, 2022 after a federal judge in Louisiana put a stay on the administration’s move. Pictured: A group of migrants lock arms and cross the Rio Grande River from Piedras Negras on Sunday, May 22 to claim asylum in Eagle Pass, Texas 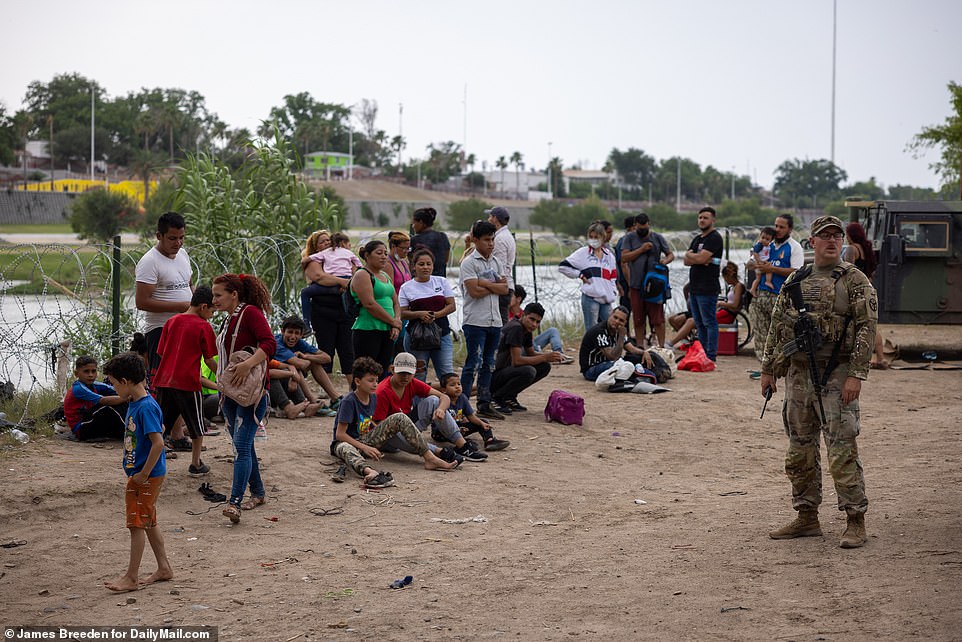 A group of more than 50 migrants wait along the U.S. side of the Rio Grande River on Sunday to be transported to a processing center in Eagle Pass, Texas

Title 42 was supposed to end on Monday, May 23, 2022, but a federal judge in Louisiana granted an injunction on Friday that prevents the government from ending the policy.

The pandemic-era policy was enacted in March 2020 under then-President Donald Trump as a way to quell mass migration at the southern border at the onset of the coronavirus crisis. Title 42 is controlled by the Centers for Disease Control and Prevention (CDC) and allows for instant expulsion of migrants without officials hearing asylum claims during a public health emergency.

All Border Patrol authority for dealing with illegal immigration falls under Title 8 – not Title 42.

Title 42 has stopped 1.7 million illegal immigrants since the start of the pandemic. Humans Rights First found that of those expelled back to Mexico under the law, 10,200 of them – or 0.006 percent – have been kidnapped, raped, tortured or violently attacked.

When the CDC announced last month it was dropping Title 42 after more than two years, it was immediately met with backlash from Republicans, national security hawks and even some Democrats who claimed it would leave the border wide open for illegal immigration.

Many also argued that it didn’t make sense to lift Title 42 while the U.S. is still in an active declared state of emergency due to COVID-19. 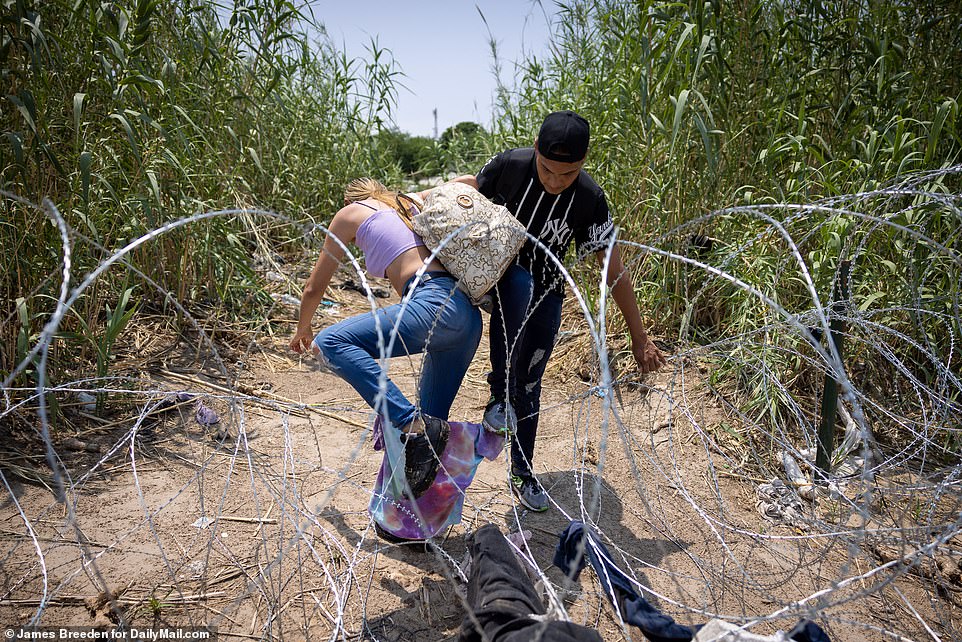 A couple of migrants from Columbia get tangled up in razor and barbed wire after crossing into the U.S. from Mexico on Sunday, May 22, 2022 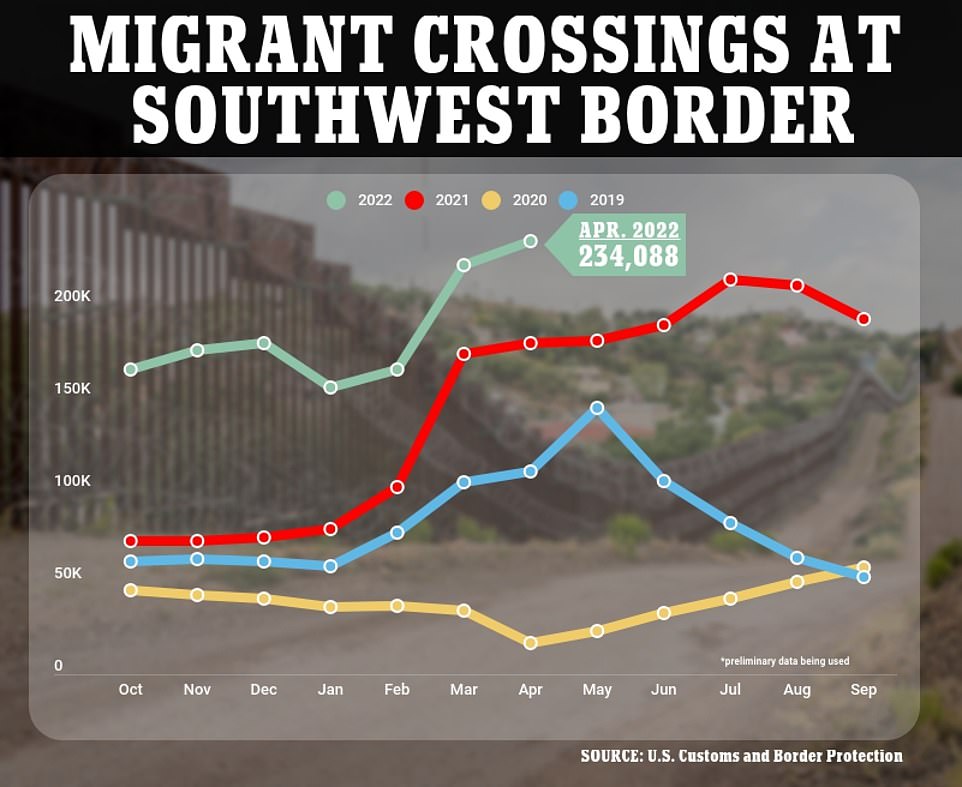 U.S. Customs and Border Protection officials made 234,088 stops on the Mexican border in April, a new high for the Biden administration and an overall 22-year high and a 5.8% increase from the 221,303 encounters in March 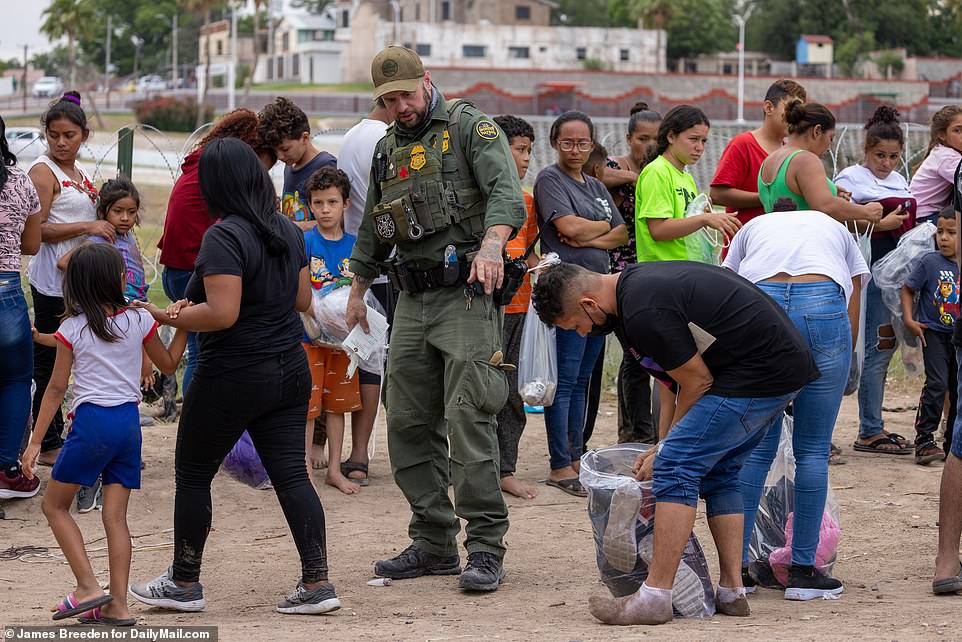 Migrants are ordered to take the laces out of their sneakers as they wait to be taken to a processing center after crossing into the U.S. 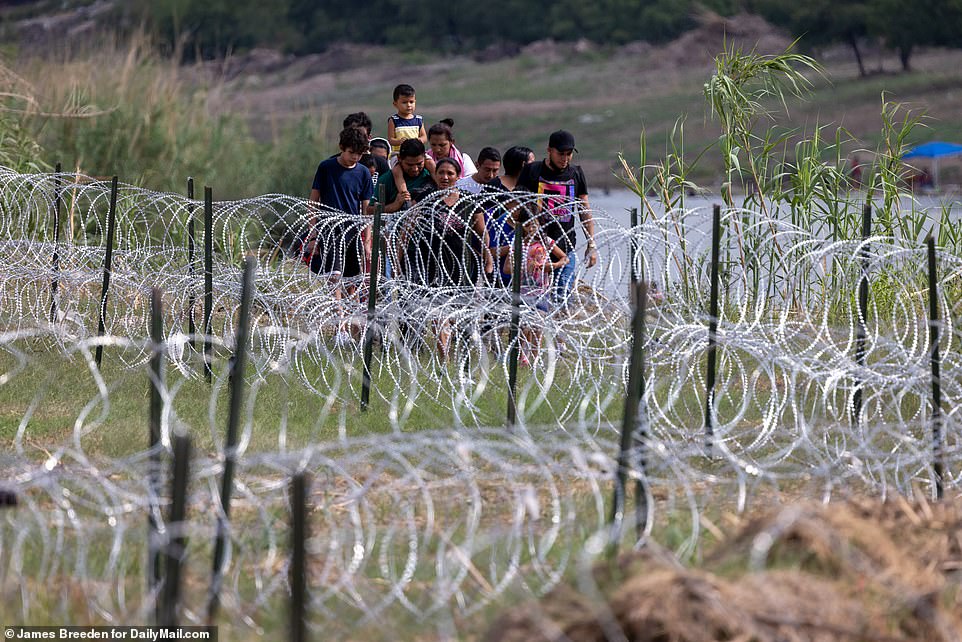 Migrants continued to trickle into the U.S. in Eagle Pass on Sunday from Columbia, Honduras, Guatemala, Cuba and Nicaragua

Both Democrats and Republicans are backing legislation that would keep Title 42 in place until all pandemic-era restrictions are lifted in the U.S., Canada and Mexico – and when the emergency order is ended in the U.S.

Judge Robert Summerhays of the Western District of Louisiana ruled Friday on a temporary stay for Biden’s end to Title 42 restrictions after a lawsuit was filed and signed on by two dozen Republican-led states.

Judge Summerhays, a Trump appointee, granted a preliminary injunction on the Biden administration’s move to end the restriction in response to the lawsuit led by Arizona, Louisiana and Missouri.

The lawsuit argues the CDC is violating the Administrative Procedures Act because they did not provide a notice-and-comment period for the plan to lift Title 42. The law in question also bars moves that are deemed ‘arbitrary and capricious.’

The plaintiffs also claim the Biden administration failed to account for the added cost to the states – especially border states – of more migrants being allowed into the U.S.

A few couples, individuals and families crossed the Rio Grande River under the Eagle Pass International Bridge on Sunday afternoon.

Internal projections predicted that once Title 42 ends, migration will triple and other estimates suggest it could go from the current 8,000 crossings per day to 18,000.

While Title 42 is no longer ending on Monday, as it previously was supposed to, Border Patrol agents and National Guard helping patrol the border still expect to face an onslaught of crossings in the coming week.

Texas Army National Guard soldiers patrolled several areas in Eagle Pass, Texas on Sunday, claiming they are taking a brunt of the work there because Border Patrol is understaffed by at least half. DailyMail.com did not see any Border Patrol agents surveying the border at some popular crossing points in Eagle Pass, but did see some Texas Police pickup trucks surveying the area. 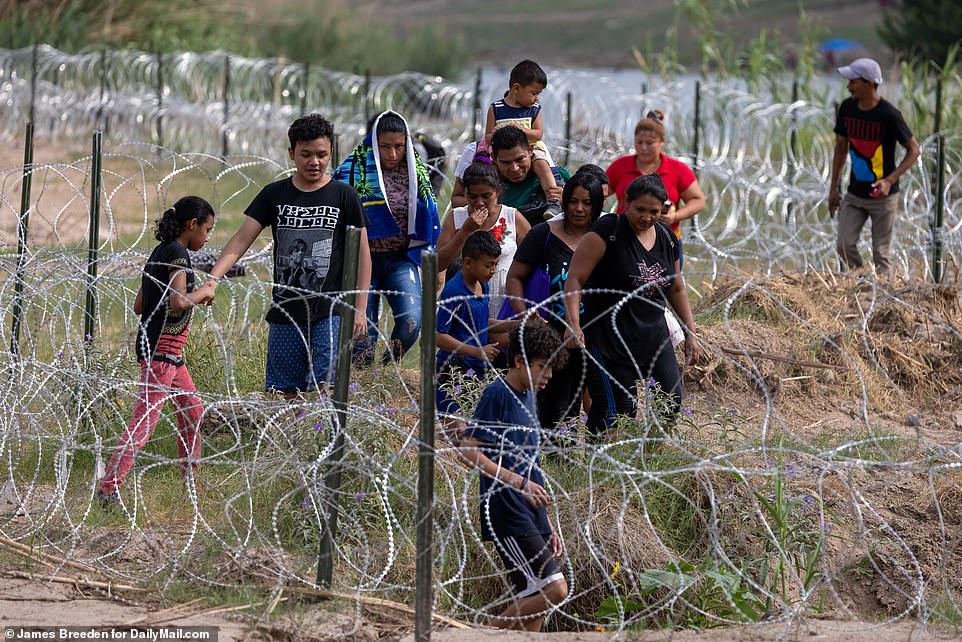 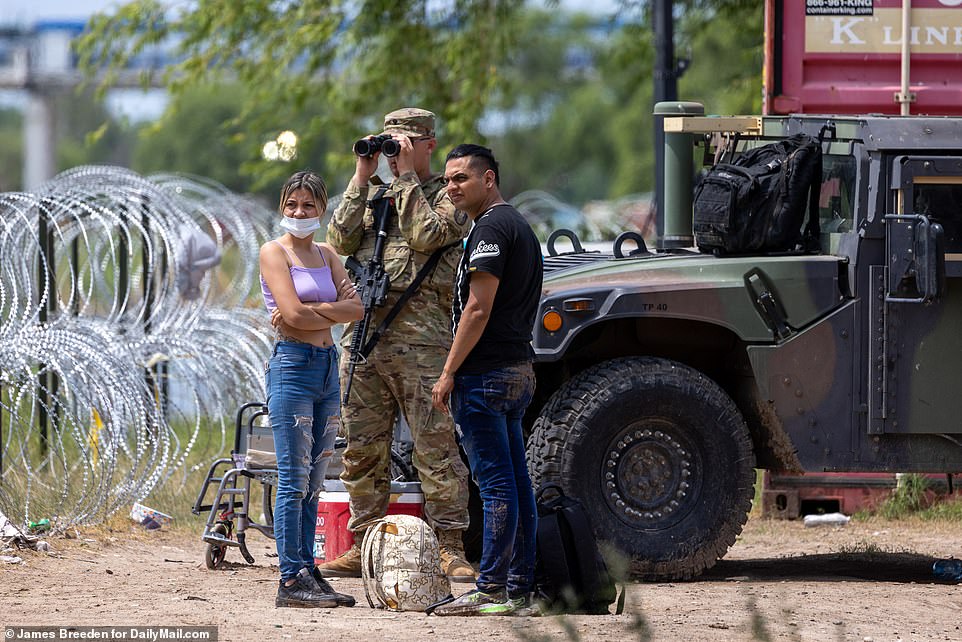 A soldier told DailyMail.com that while the crossing points in Eagle Pass need around 400 CBP agents, there are only 250 stationed there. Another solider said that the overwhelmed immigration agencies are actively recruiting National Guard members to try and get them to join the Homeland Security immigration agencies.

Uncertainty is ensuing by many over what to expect come Monday morning now that Title 42 is remaining.

Texas’ Republican Governor Greg Abbott plans to tour the border in Eagle Pass on Sunday before holding a security briefing and press conference on the enduring crisis.

Some Texas National Guard soldiers say that they have been stationed at the border since October and claim there are no signs that their post will be ending any time soon.

U.S. Customs and Border Protection officials made 234,088 stops on the Mexican border in April, a 5.8 percent increase from the 221,303 encounters in March. The number last month also represents a new high for the Biden administration and an overall 22-year high at the southern border. 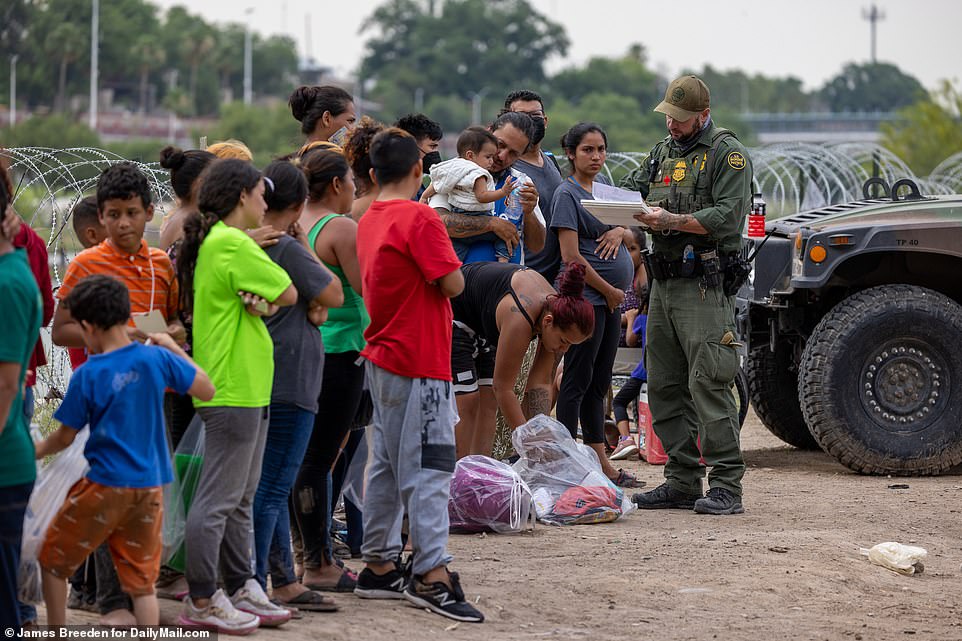 June's Nintendo Direct Mini featured over two dozen third-party titles expected to launch over the next year. The event...
- Advertisement -

Pete Doherty took to the stage at Castlefield Bowl in Manchester to perform a special open-air show with the Libertines on...

July is finally here, and with it, Prime Video...
- Advertisement -