Adam Lambert turned heads at the BRIT Awards on Tuesday night as he smouldered in a leopard print suit.

The American Idol star, 39, took to the red carpet in the animal print ensemble and accessorised with a pair of snakeskin style gloves.

Joined by a whole host of famous pals, Adam took the chance to catch up with the Years & Years singer Olly Alexander, 30, before entering the event. 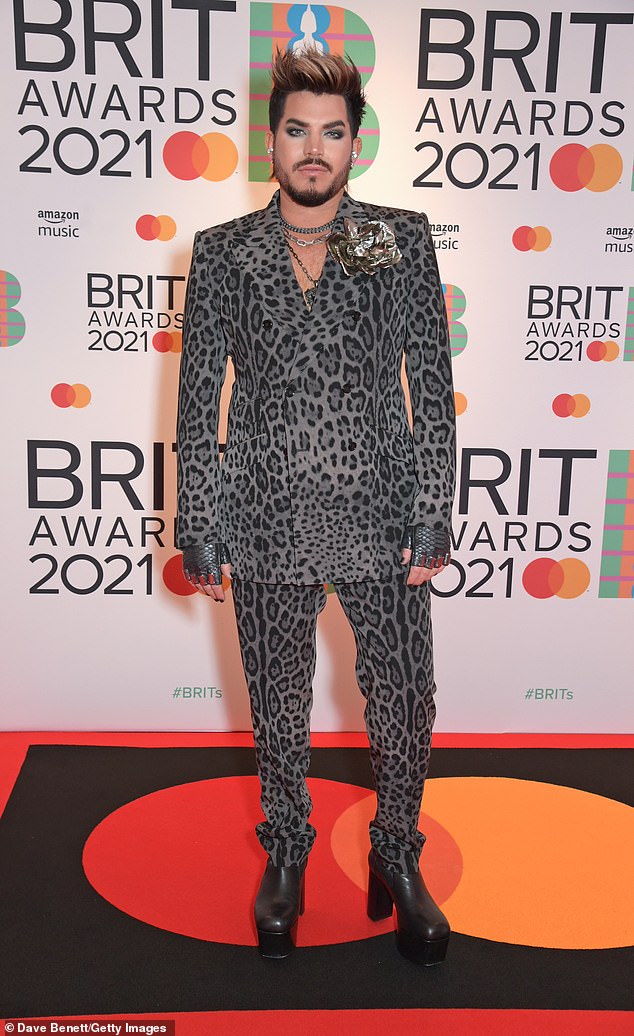 Striking: Adam Lambert turned heads at the BRIT Awards on Tuesday night as he smouldered in a leopard print suit

Olly looked upbeat ahead of his live performance at the ceremony as he threw out a peace sign at onlookers.

The Desire singer donned a statement black and white star-print suit with fluffy-cuffed sleeves and completed the look with a pair of matching studded brogues.

Adding some glitz to his fashion-forward ensemble, the hitmaker donned a selection of chain necklaces under his suit jacket, to which he’d pinned a large flower. 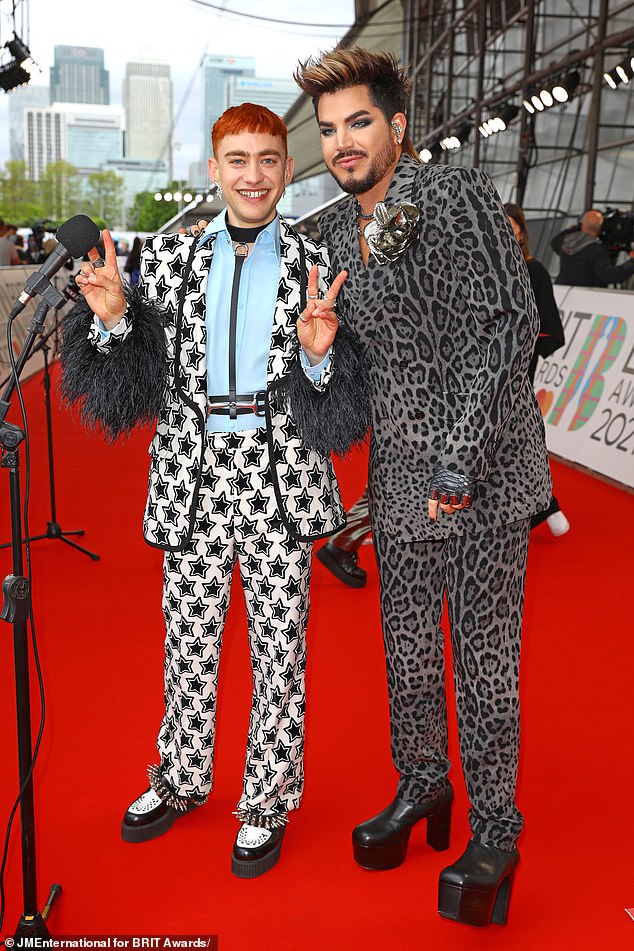 Pals: Adam took the chance to catch up with the Years & Years singer Olly Alexander, who donned a statement star-print suit with fluffy-cuffed sleeves, before entering the event

In an explosion of colour and optimism, the 2021 Brit Awards celebrated the achievements of British and international artists over the last 18 months.

This year’s Rising Star award winner Griff was handed the baton for the honour by 2020’s Rising Star winner Celeste, who herself was up for three further awards this year. 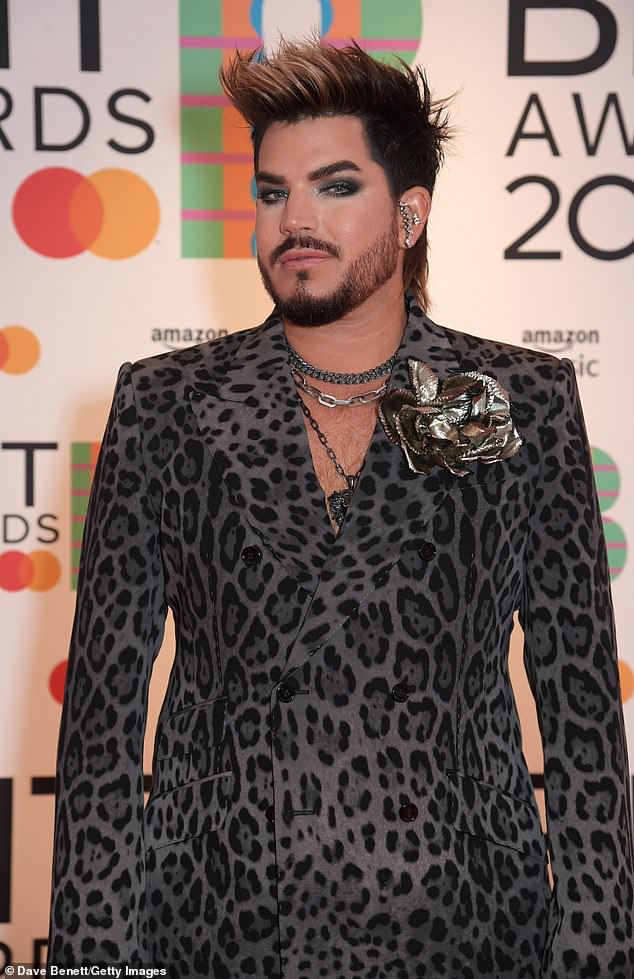 And Arlo Parks was crowned Breakthrough Artist, one of the three awards she was nominated for, after what has been an incredible year for the young London artist.

She also made her debut BRITs performance with an elegant rendition of ‘Hope’ and decorated the set as a sunflower field in a nod to the name of her debut album.

The most nominated girl band in Brit Award history, Little Mix finally bagged the title of British Group, having been up for the award three previous times.

Meanwhile, the International Group category followed a similar suit, with the California’s girl band HAIM in attendance to accept their award.

The Blinding Lights hitmaker treated the audience to an unforgettable performance of his US No. 1 single ‘Save Your Tears’, pre-recorded from the US. 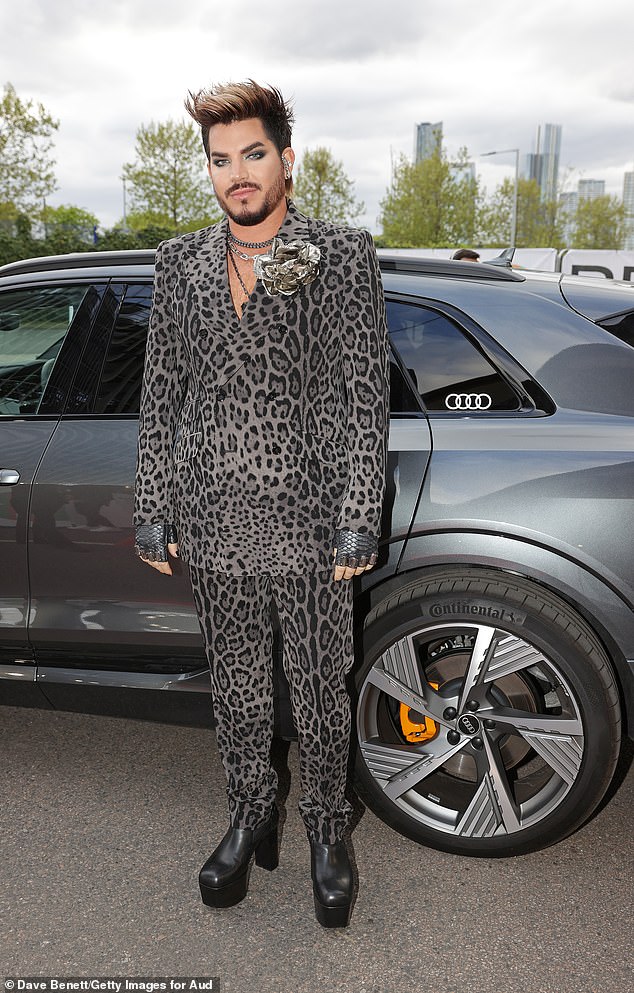 Turning heads: The American Idol star took to the red carpet in the animal print ensemble and accessorised with a pair of snakeskin style gloves

On home ground, Dem Boy Paigon hitmaker JHUS scooped the Male Solo Artist award, which was accepted on his behalf by DJ Semtex in his absence.

The first female artist to win the highest BRITs accolade and the UK’s biggest selling artist of the year to date, Taylor Swift appeared in person to accept the special Global Icon award, which was presented by Game of Thrones actress Maisie Williams.

Each winner was presented with the Brit’s first ever collaborative double-trophy, designed by Es Devlin OBE and Yinka Ilori MBE, with each recipient encouraged to re-gift the smaller trophy to someone else.

The ceremony, hosted by Jack Whitehall and broadcasted on ITV, was a celebration of the return to live music.

The event took place in front of a live audience of 4,000 people at London’s The O2 six days before the next phase of lockdown lifts.

Of the small audience, 2,500 attendees were made up of key workers and their guests whose tickets were donated by the BRITs via a ballot. 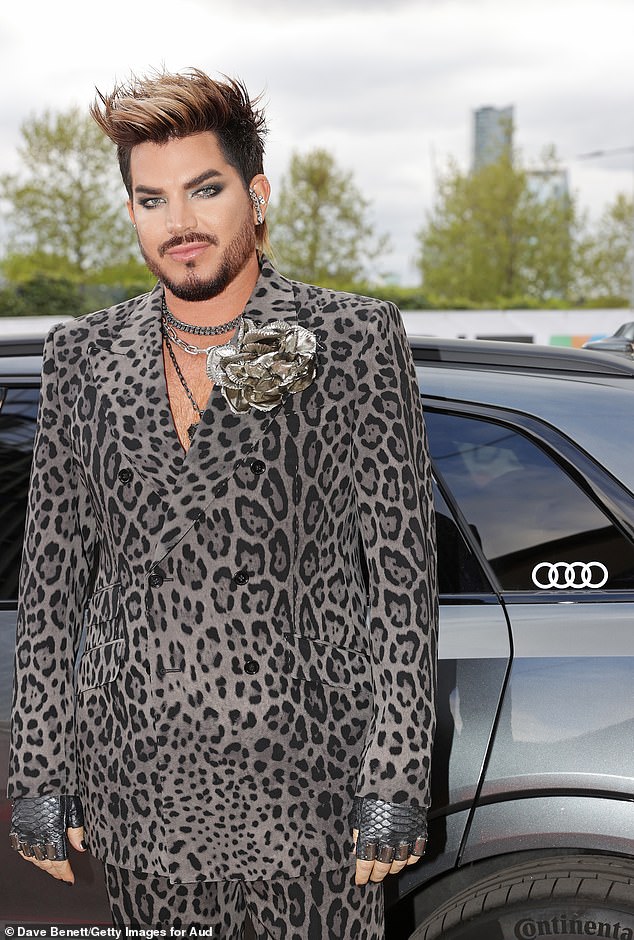 Details: Adding some glitz to his fashion-forward ensemble, the hitmaker donned a selection of chain necklaces under his suit jacket, to which he’d pinned a large flower

Working closely with the Government to adhere to safety guidelines, The BRITs, as the first live music show at The O2 in over a year, played an important role in paving the way for the return of live music at scale as the UK emerges from the past year’s restrictions.

Audience members were not required to be socially distanced or wear face coverings in the arena, but were required to follow existing Government guidance when travelling to the venue and adhere to rules set out by the event organisers.

Attendees had to show proof of a negative lateral flow test result to enter the venue, and as part of the wider scientific research on the trial events, all attendees were asked to take a test post-event to gather further evidence on the safety of indoor settings, reduced social distancing and the removal of non-pharmaceutical interventions like face coverings.

They also were asked to provide contact details for NHS Test and Trace to ensure everyone can be traced in the event of an audience member receiving a positive test after the event. 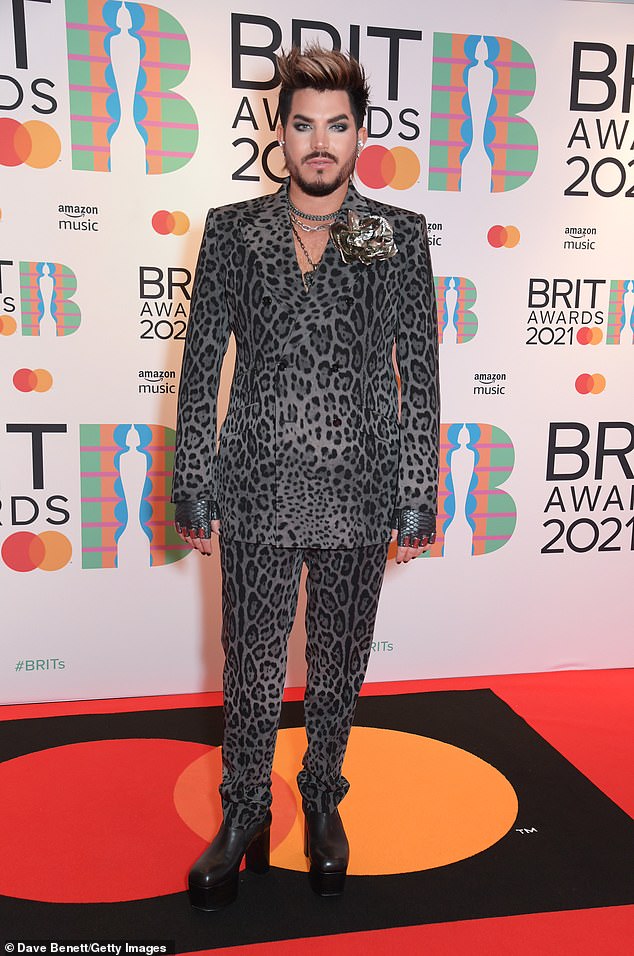 Best foot forward: Adam boosted his height with a pair of shiny black leather heeled boots as he strutted onto the red carpet at the A-list event 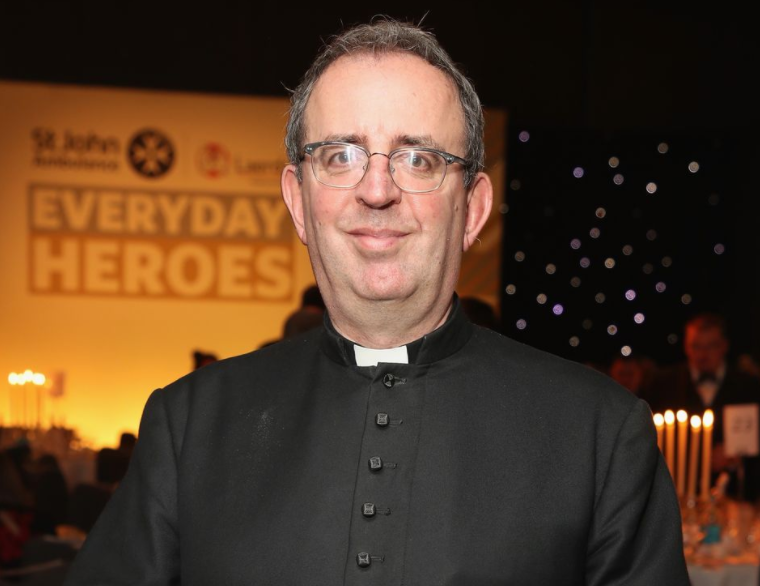 Richard Keith Robert Coles, professionally known as Richard Coles is an English musician, journalist, radio presenter, and Church of England parish priest. He is well recognized for being a part of the multi-instrumentalist group the Communards, which achieved three Top Ten hits. He is also known for his multiple appearances on both radio and television…. 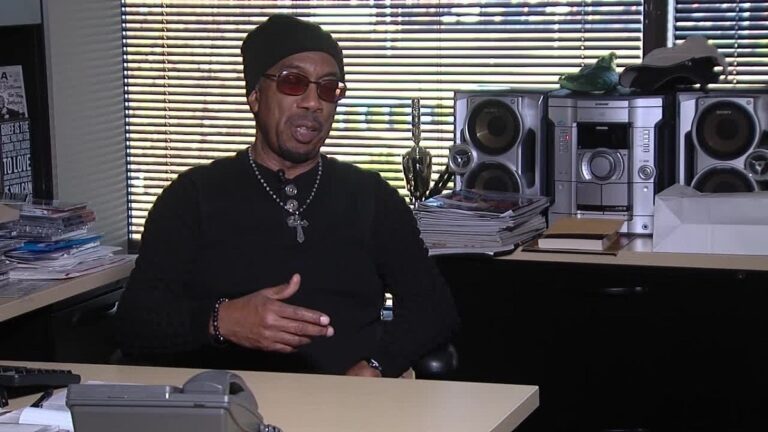 Who is Bobby O’Jay’s wife? Age, Instagram, wedding photos: A piece of heartbreaking news is coming into the headlines about the passing of Memphis Radio Legend Bobby O’Jay at the age of 68. The news of his death has left everyone shocked. All his fans and family members are mourning the death of the legendary… 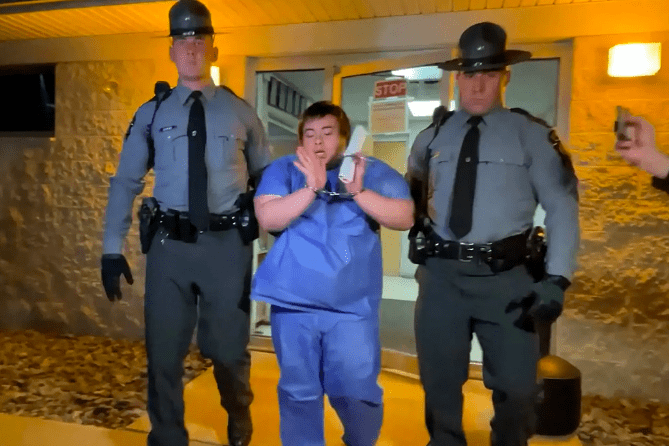 On August 5, an unhinged 24-year-old plowed his car into a crowd of people in a small town in Pennsylvania, killing one and injuring 17 others, then drove home and murdered his mother with a hammer. Citizens of Berwick, Pennsylvania were fundraising for the families of those killed in a tragic fire earlier this month…. 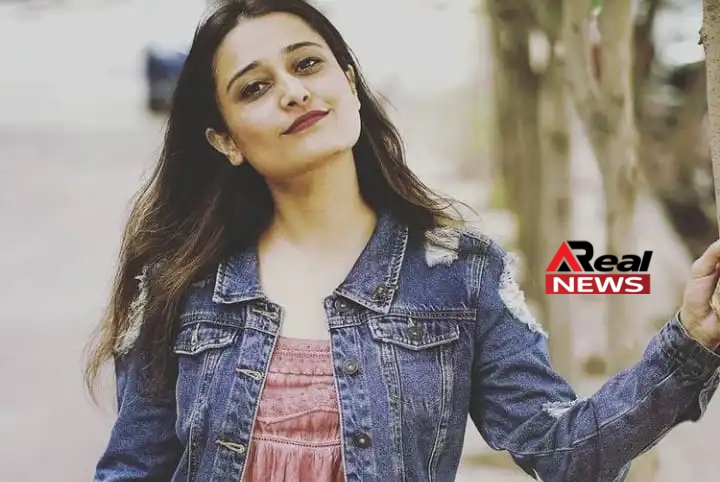 Aleena Rais Age -In this blog, We are talking about She is a well-known personality already and people have been interested in knowing about her, but today suddenly the whole world is searching for Aleena. The entire social media is full of stuff related to her. Some want to know about her personal life like…

A new study out Friday revealed that global rates of anxiety and depression soared by more than a quarter over the course of the coronavirus pandemic. According to the report, authored by a worldwide team of academics led by Dr. Damian Santomauro at Australia’s University of Queensland, researchers attributed 53 million new cases of major…

With celebrities, we have seen many people come together but their relationships have not worked. Here, we will talk about Shakira and Pique. There are sometimes where we have found that stars have stuck together even when the going gets tough and have presented us with a great idea of love. Advertising Advertising It was…