The three-time nominee, 25, hit the red carpet at the 2021 BRIT Awards in sensational, head-turning style with a beehive hairstyle and a thigh-scraping yellow Vivienne Westwood Couture corset minidress.

The look was strikingly similar to Amy’s canary yellow gown by Preen – she picked up the Best Female Solo Artist gong at the 2007 event.

Her flattering frock of choice boasted a deep plunging neckline, patterned print and a dramatic purple hued train, which descended from her cinched waist.

Dua oozed Hollywood glamour as she styled her signature raven locks into a beehive hairdo and added a slick of radiant makeup.

The London-born beauty further complemented her glamorous ensemble with a triple row pearl necklace with a matching bracelet and earrings. 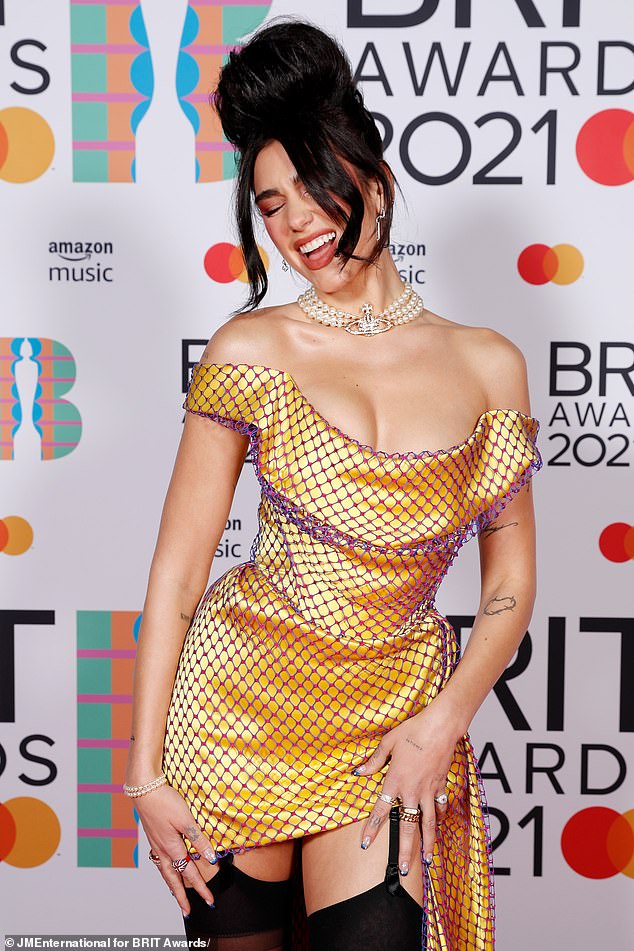 Playful: Dua was in a playful mood as she posed for photographers gathered on the red carpet 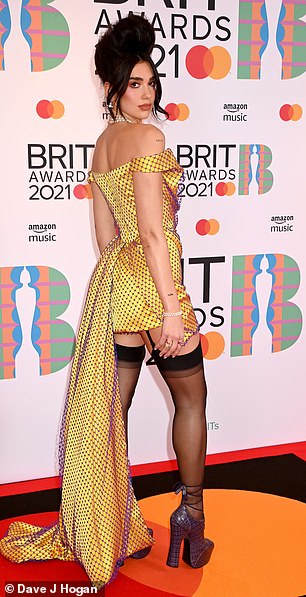 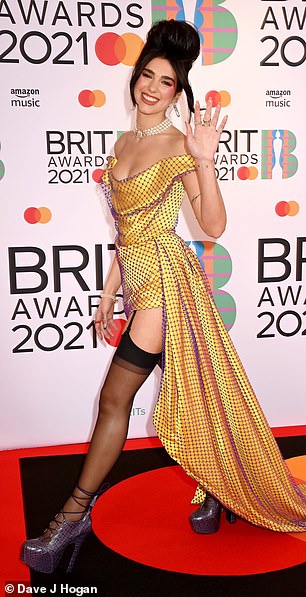 Stunning: Dua  made a sensational arrival on the red carpet in her breathtaking gown of choice 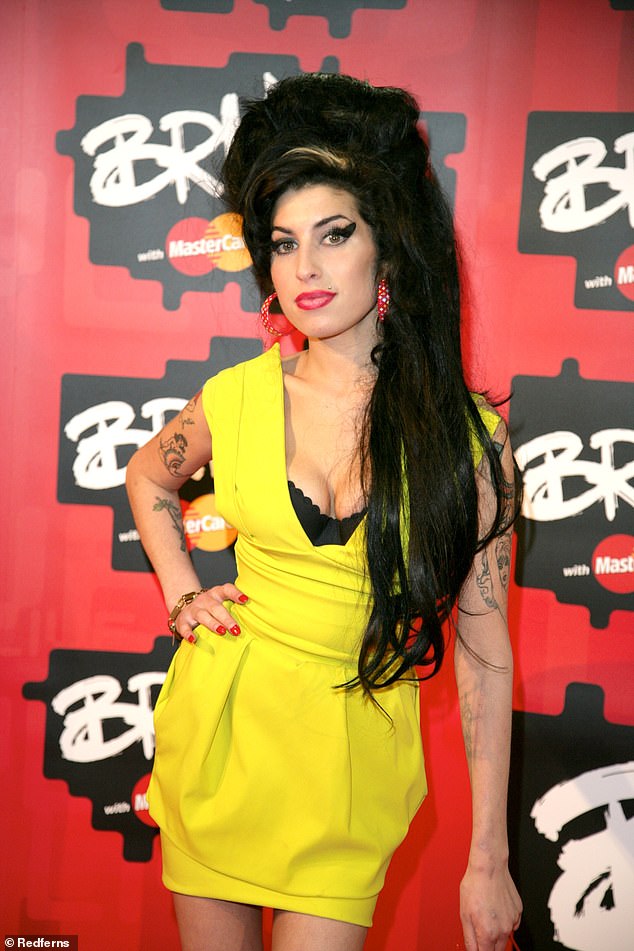 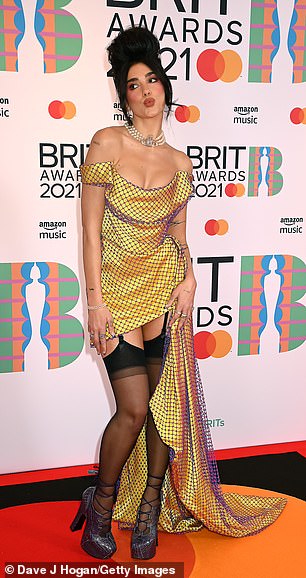 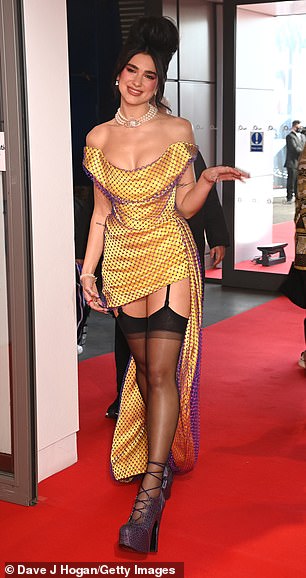 Details: It had a dramatic purple fishnet train which commanded attention on the red carpet

She appeared in great spirits as she posed up a storm on the star-studded red carpet and playfully smiled with a life-size BRIT Award.

Amy tragically passed away aged 27 on the 23 July 2011 after being found dead in her bed due to alcohol poisoning.

And the awards ceremony truly belonged to Dua, as the evening saw her scoop the accolade for Female Solo Artist and the Mastercard British Album of the Year Award for her lockdown hit Future Nostalgia.

Happy: The singer appeared in great spirits as she posed up a storm on the large red carpet 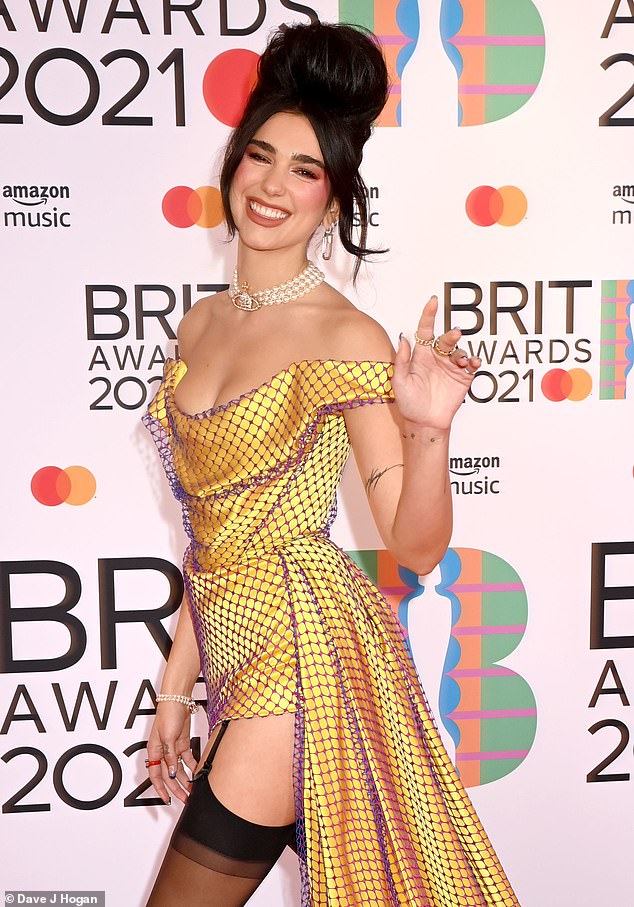 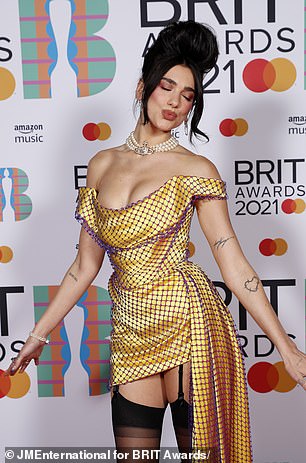 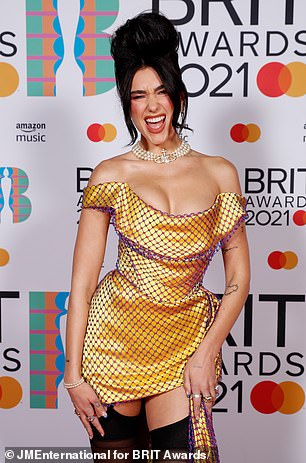 Glamour: Dua oozed Hollywood glamour as she styled her signature raven locks into a beehive hairdo and added a slick of radiant makeup 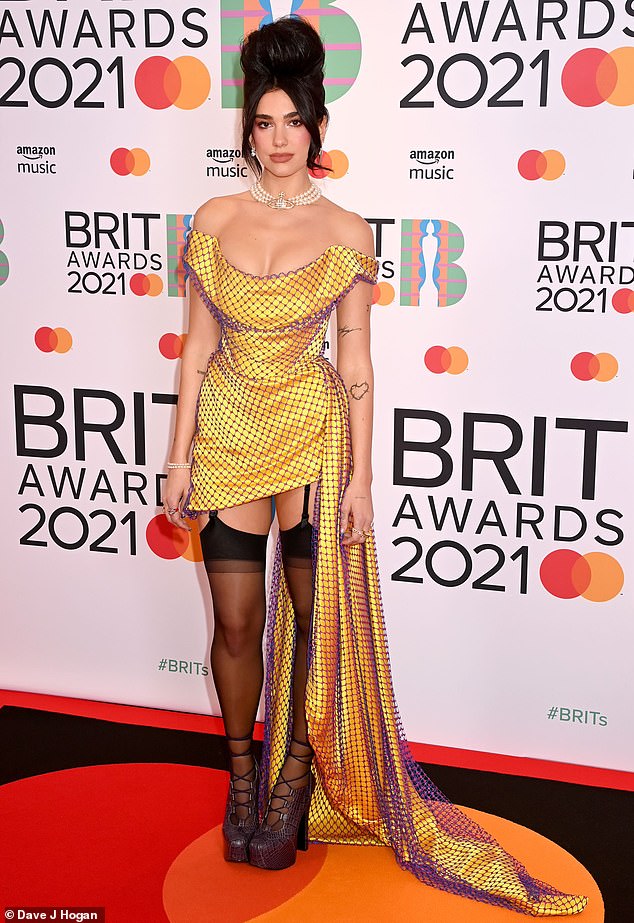 Such fun! The ceremony, which will be broadcast live on ITV, will celebrate the return to live music and nominee Dua has promised those attending that it will ‘be a night to remember’

Exciting: Nominee Dua, 25, has promised those attending that it will ‘be a night to remember’

Another US star who made it to The O2 was Olivia Rodrigo who lit up the stage with a performance of her stunning hit single, Drivers Licence.

Twice nominated Headie One also blew the audience away with a special performance of Ain’t It Different/Princess Cuts, joined by fellow nominees AJ Tracey and Young T & Bugsey. 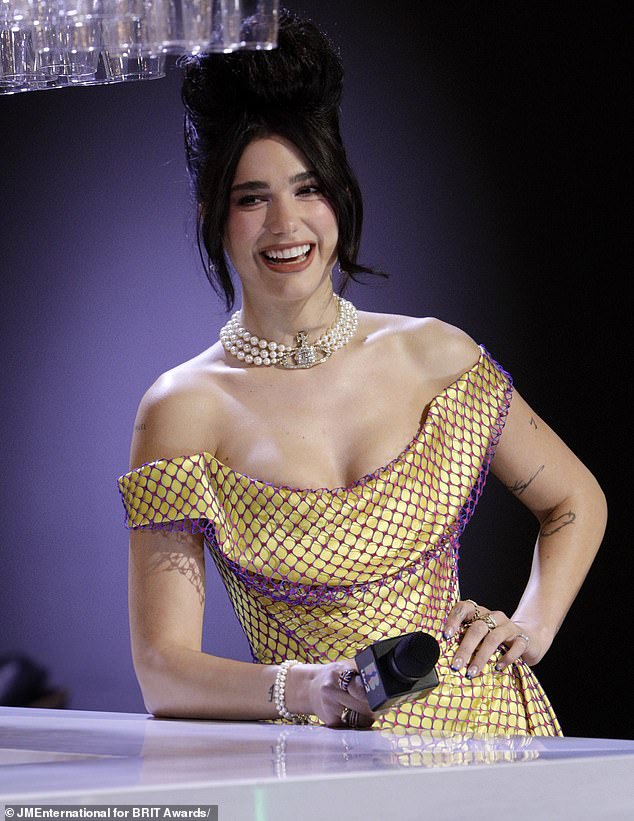 Animated: Dua put on an animated display as she delivered a speech in the media room before the star-studded event

The BRIT Awards took place in front of a live audience of 4,000 people at London’s The O2 six days before the next phase of lockdown lifts.

The ceremony, which was broadcasted live on ITV, celebrated the return to live music and Dua Lipa promised those attending that it would ‘be a night to remember’. 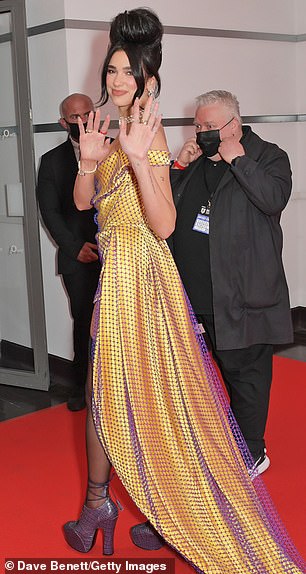 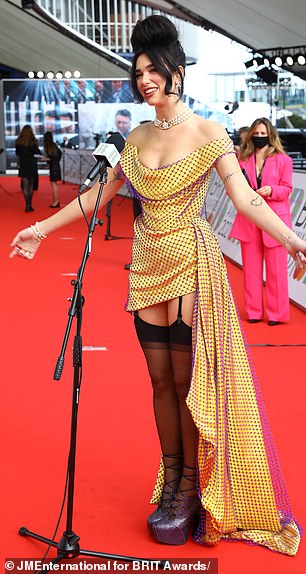 Friendly: Dua appeared in great spirits as she excitedly waved to the crowds of fans and photographers on the red carpet 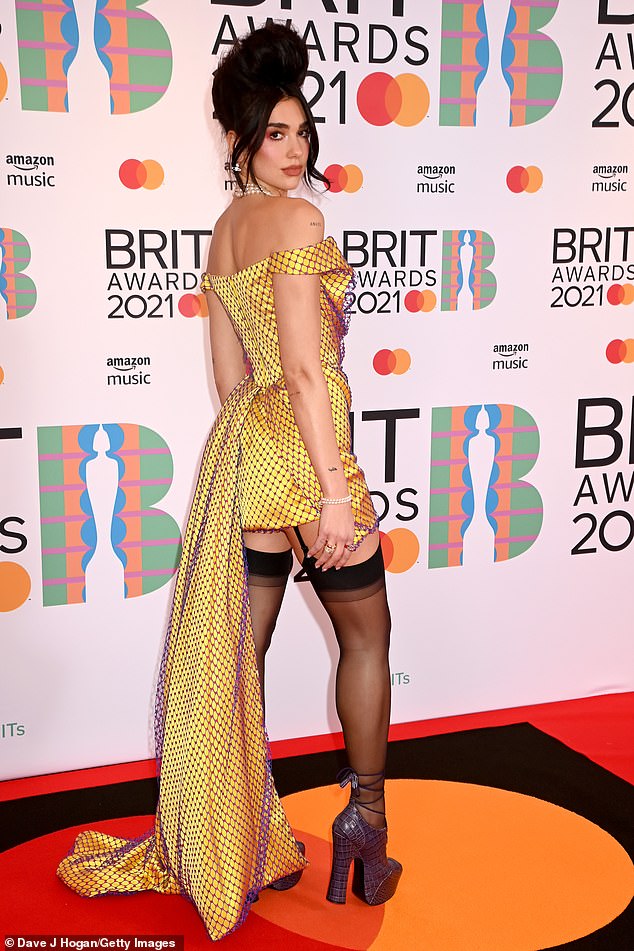 Catching all the best angles: She was sure to give photographers a thorough look at her gown 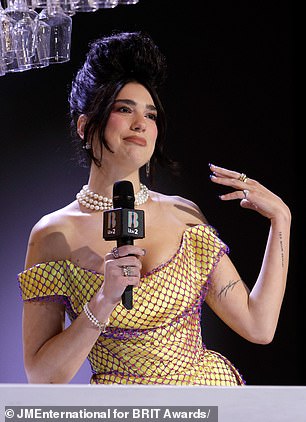 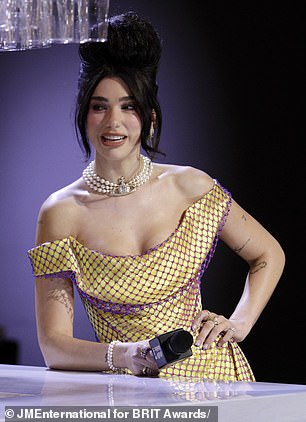 The indoor ceremony and live show formed part of the Government’s scientific Events Research Programme, and used enhanced testing approaches to examine how events can take place without the need for social distancing after all restrictions are lifted on June 21.

Working closely with the Government to adhere to safety guidelines, The BRITs was the first live music show at The O2 in over a year, with 4,000 tickets being up for grabs – just one fifth of the venue’s 20,000 capacity

The BRITs played an important role in paving the way for the return of live music at scale as the UK emerges from the past year’s restrictions.

Audience members were not socially distanced or required to wear face coverings in the arena, but were required to follow existing Government guidance when travelling to the venue and adhere to rules set out by the event organisers.

Among the rules, attendees had to have proof of a negative lateral flow test result to enter the venue.

As part of the wider scientific research on the trial events, attendees were also asked to take a test after the event to gather further evidence on the safety of indoor settings, reduced social distancing and the removal of non-pharmaceutical interventions like face coverings. 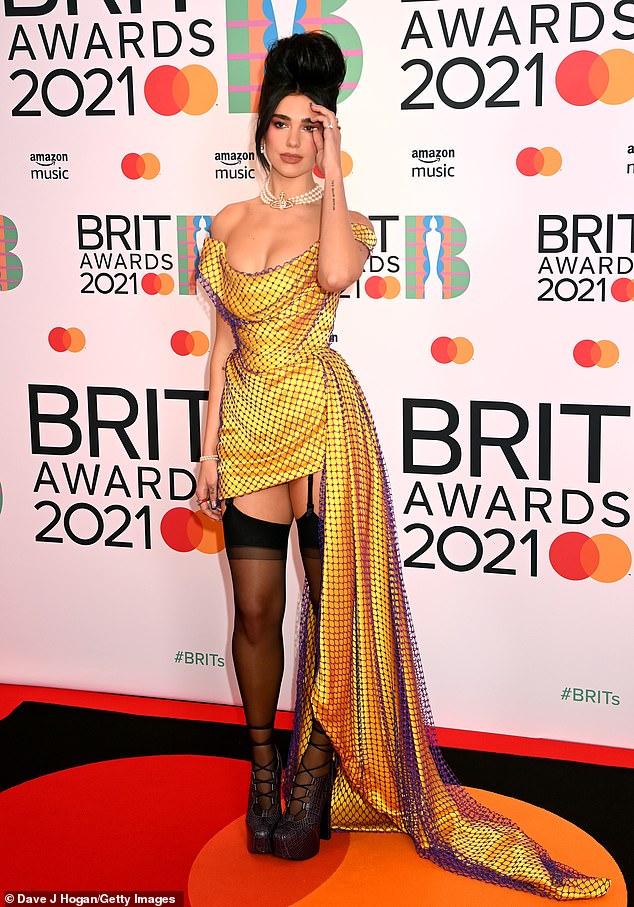 Stealing the show: The brunette beauty’s flattering frock of choice helped her steal the show 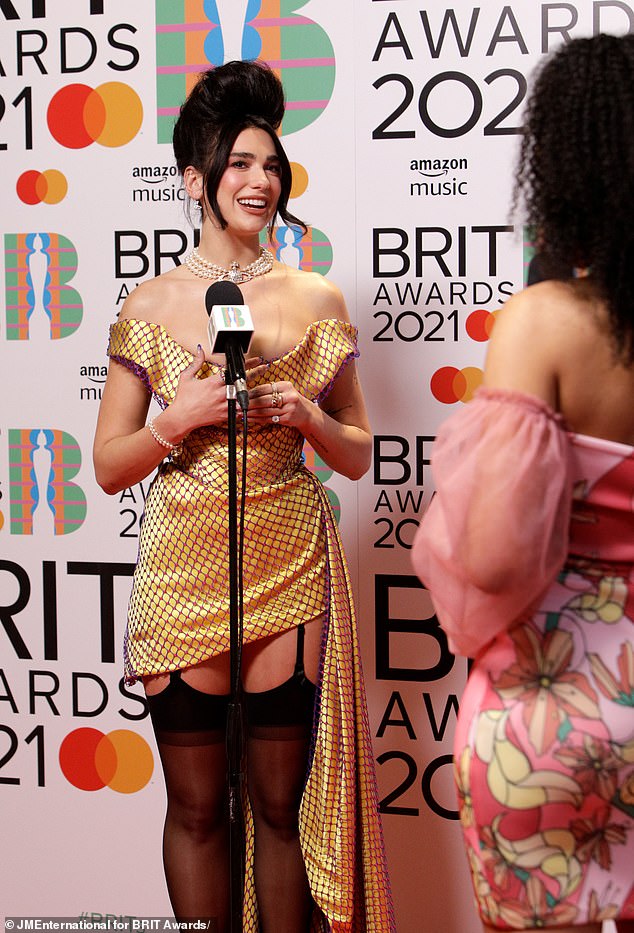 Sparkle: Dua further complemented her glamorous ensemble with a triple row pearl necklace with a matching bracelet and earrings 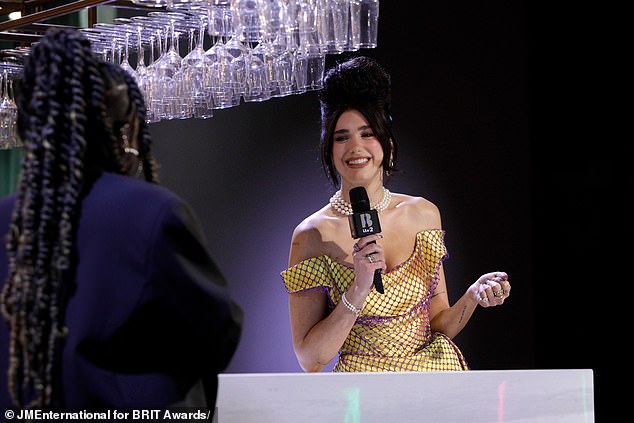 Chat: She was interviewed backstage by Clara Amfo ahead of the anticipated show kicking off