She was nominated in the British Single category for her tune with musician Regard, Secrets, but lost out to Harry Styles’ track Watermelon Sugar on the night.

And Raye showed off her ample assets in a hot pink thigh-split gown as she made an eye-popping arrival on the red carpet at the BRIT Awards 2021 on Tuesday night.

The singer, 23, put on a very busty display as she wowed in the daring dress which featured a sparkly corset-style top and showed off plenty of leg with the skirt. 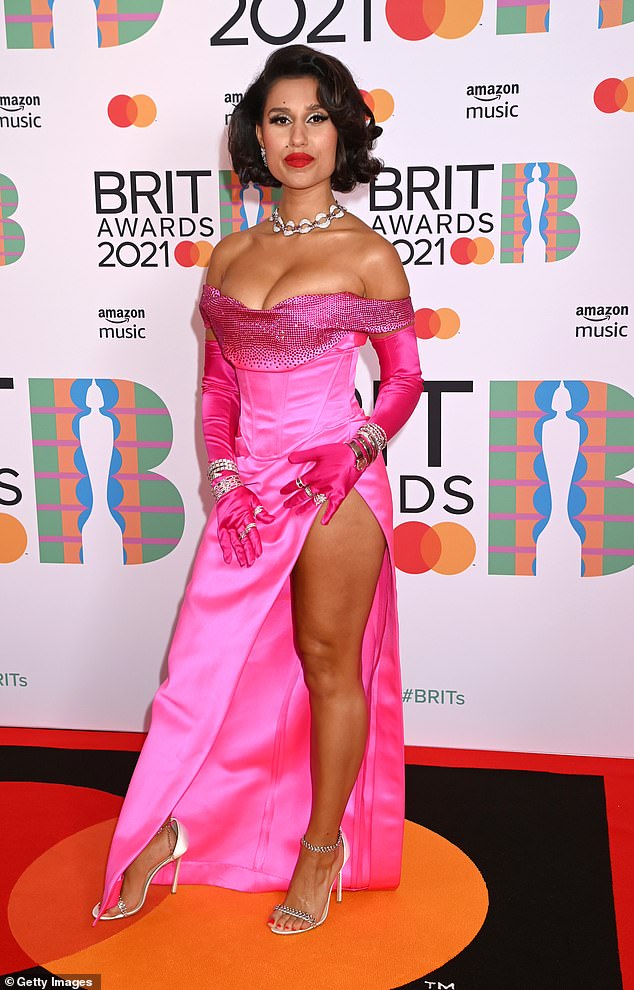 Wow! Raye showed off her ample assets in a hot pink thigh-split gown as she made an eye-popping arrival on the red carpet at the BRIT Awards 2021 on Tuesday night

She completed her stylish red carpet look with matching pink satin gloves and wore a pair of sparkly white heels to elongate her legs.

The star wore her dark tresses styled perfectly into blow dried curls and opted for a typically glamorous makeup look with a slick of red lip.

She accessorised with a statement silver choker and wore a selection of silver bracelets and rings over her long gloves. 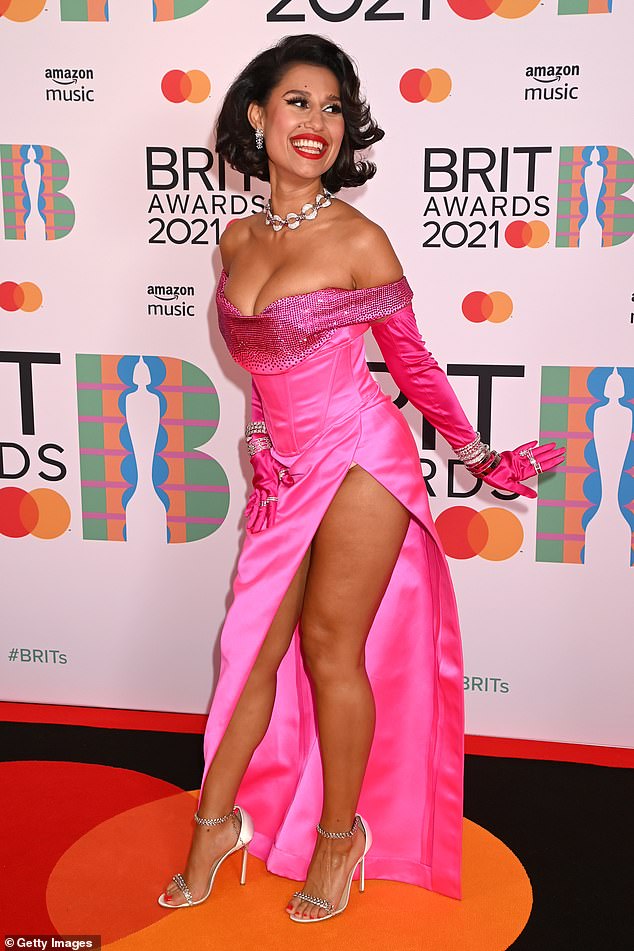 Stunning: The singer, 23, put on a very busty display as she wowed in the daring dress which featured a sparkly corset-style top and showed off plenty of leg with the skirt 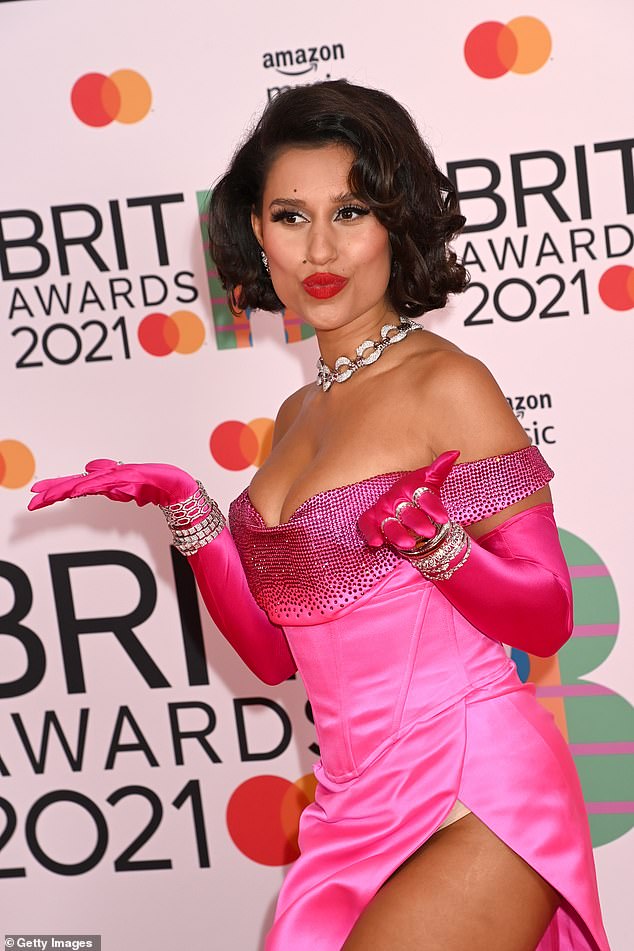 Glam: She’s been nominated in the British Single category for her hit tune with musician Regard, Secrets 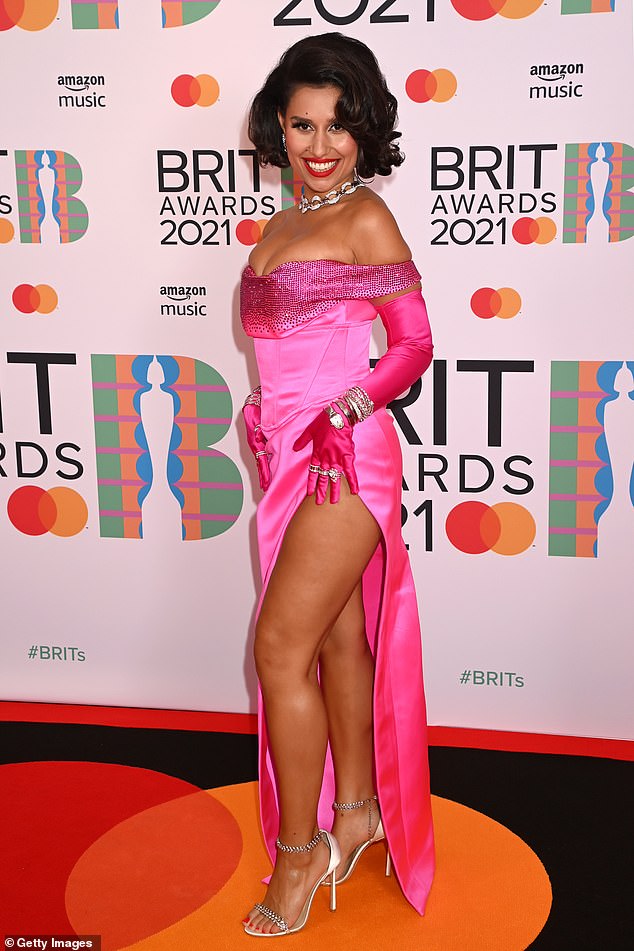 Commanding attention: She completed her stylish red carpet look with matching pink satin gloves and wore a pair of sparkly white heels to elongate her legs 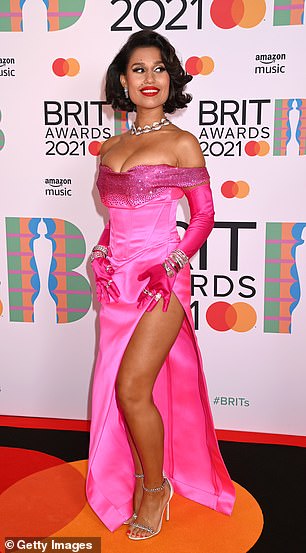 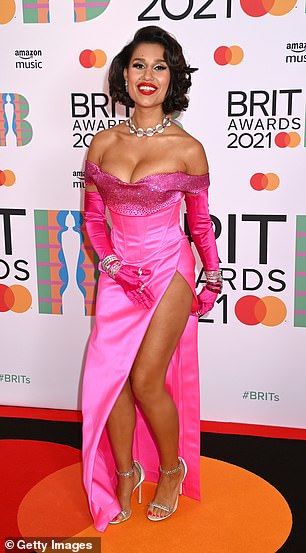 Gorgeous: The star wore her dark tresses styled perfectly into blow dried curls and opted for a typically glamorous makeup look with a slick of red lip 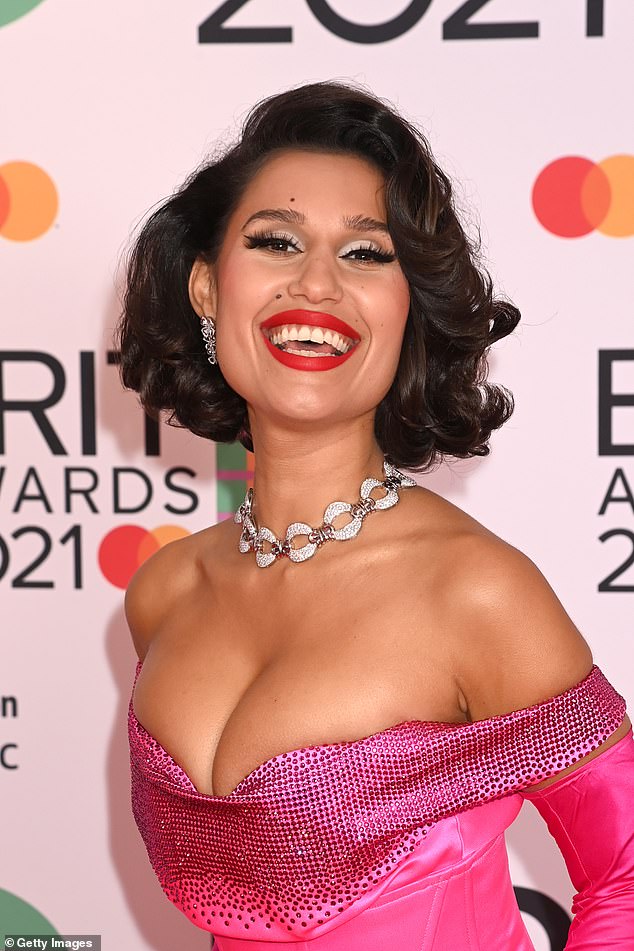 Exciting: The 2021 Brit Awards , hosted by Jack Whitehall, will mark the first major indoor music event in over a year as bosses released 2,500 free tickets to key workers 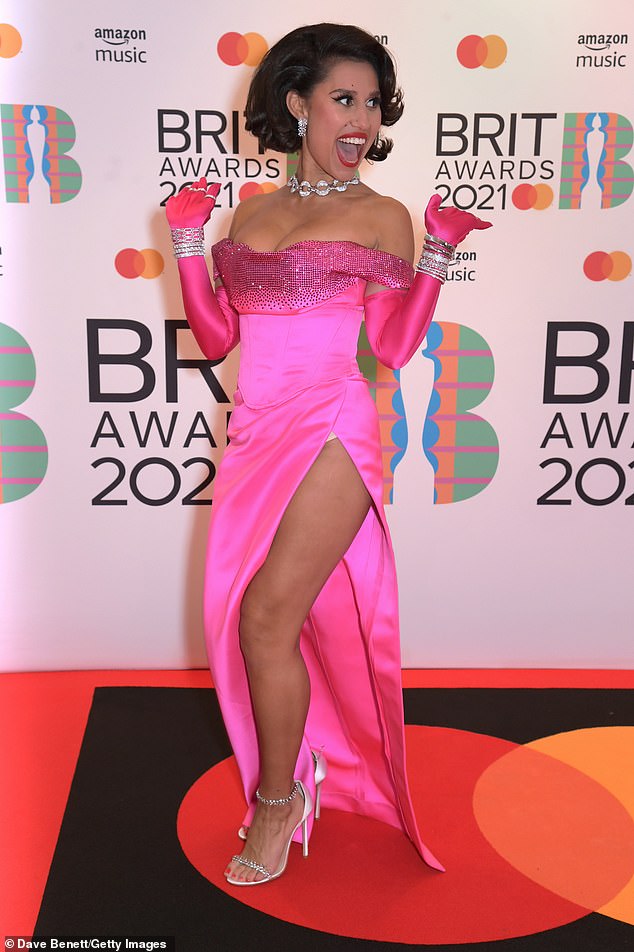 All smiles: Raye put on an animated display in her daring gown as she worked her best angles for the camera 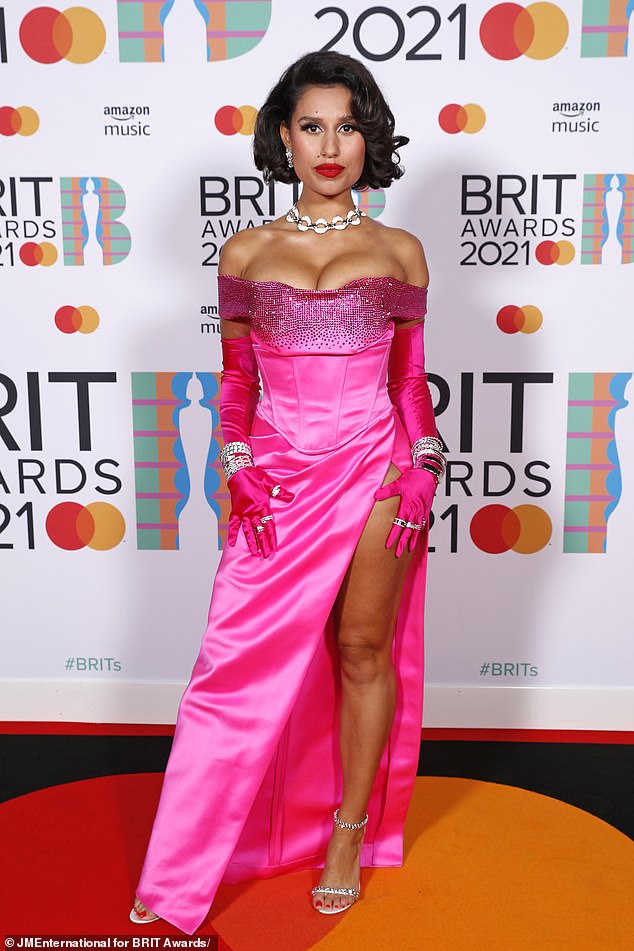 Radiant: The star looked incredible as she accessorised with huge silver earrings and a silver choker 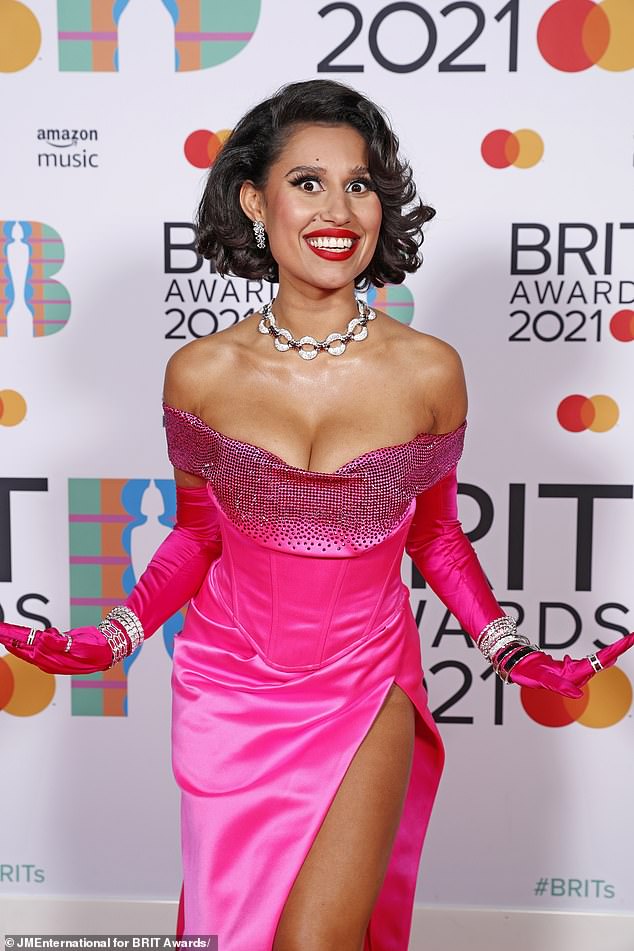 Big event: The ceremony, which will be broadcast live on ITV, will celebrate the return to live music and nominee Dua Lipa has promised those attending that it will ‘be a night to remember’ 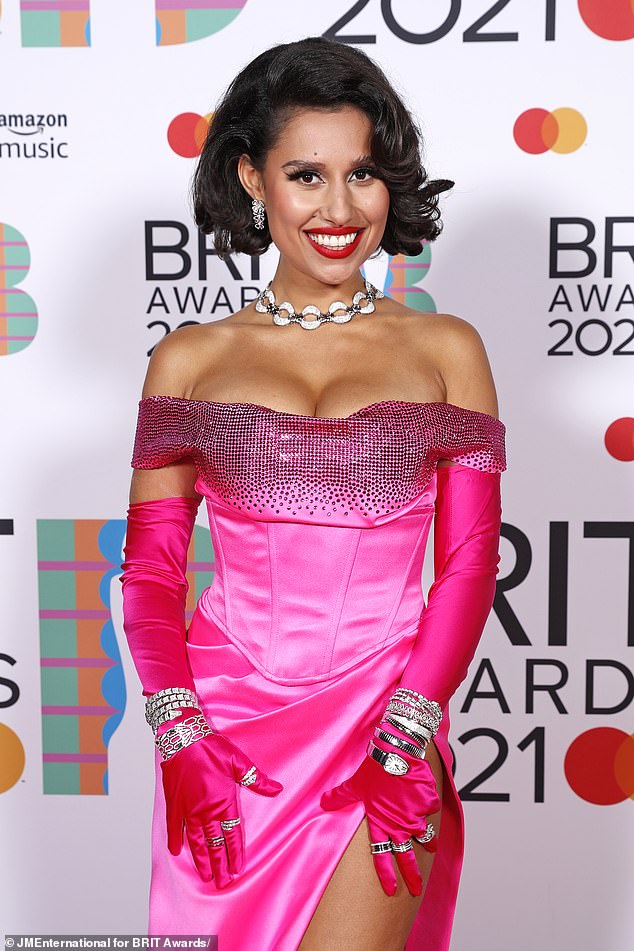 Precautions: Among the rules, attendees must have proof of a negative lateral flow test result to enter the venue 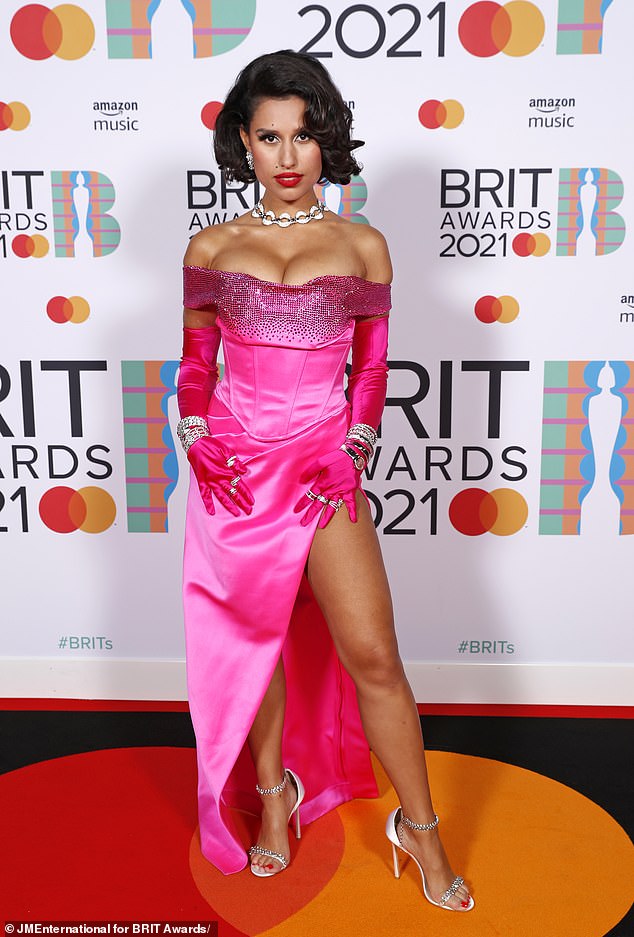 Sexy: She exuded confidence infront of the camera 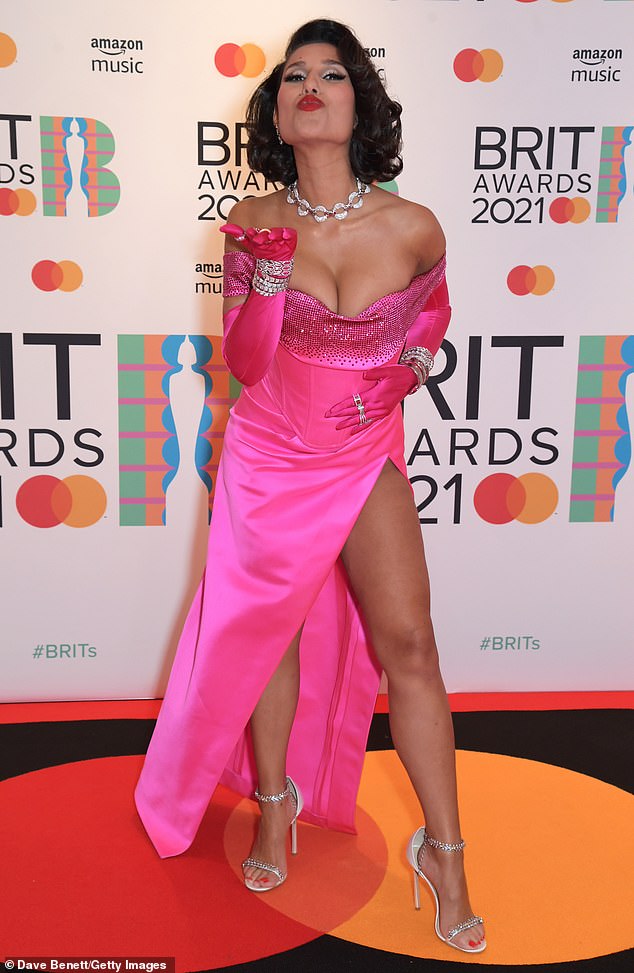 Animated: Raye looked like she was having a great time on the red carpet as she blew a kiss towards the cameras 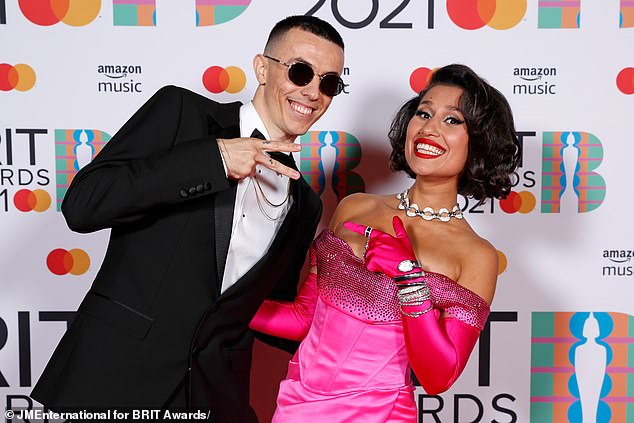 Friends: Raye was joined by Regard on the red carpet who looked suave in a black suit and bow tie 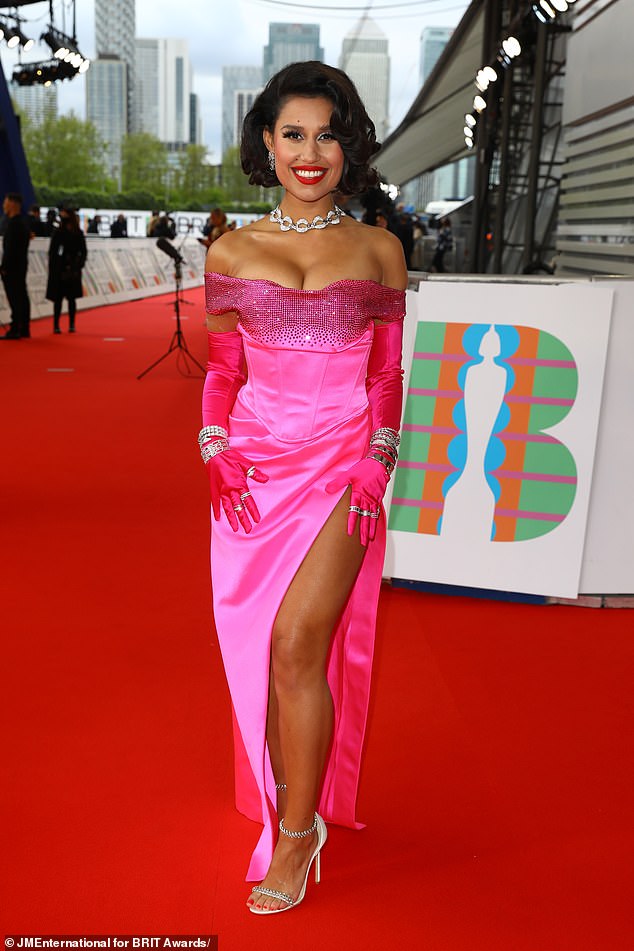 Details: The singer, from south London, added touched of glamour to her outfit with statement silver jewellery 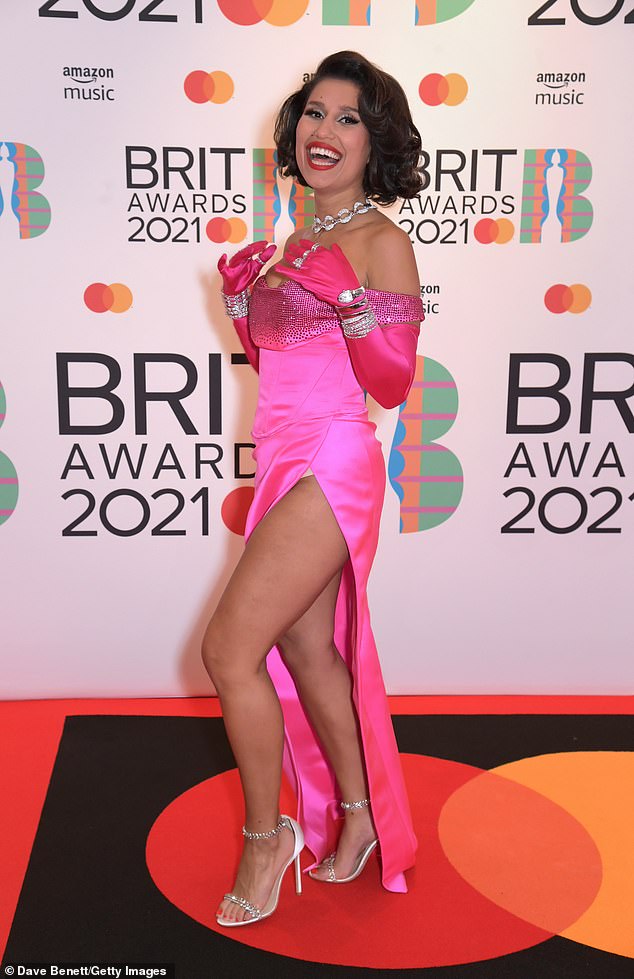 Toned: Raye put on a very leggy display in the corset style dress which featured a daring thigh-split 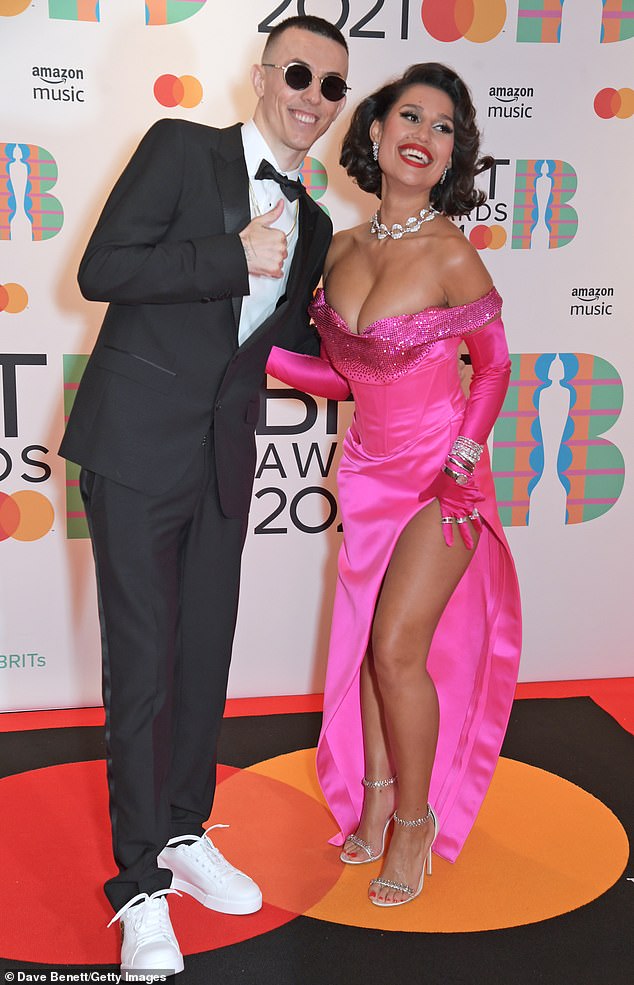 Stars: Jessie Ware, J Hus, Bicep, AJ Tracey are all up for two awards as with Headie One 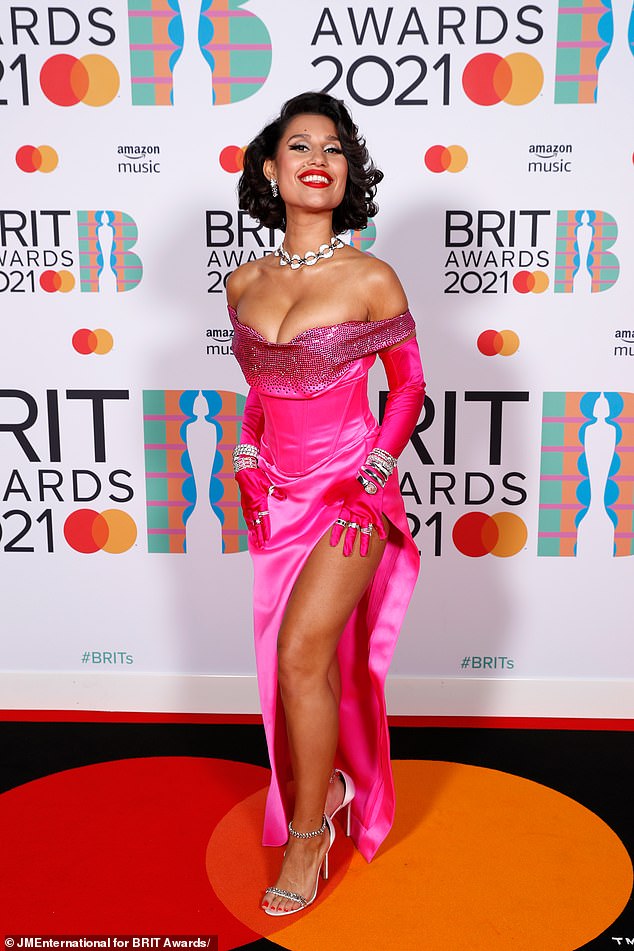 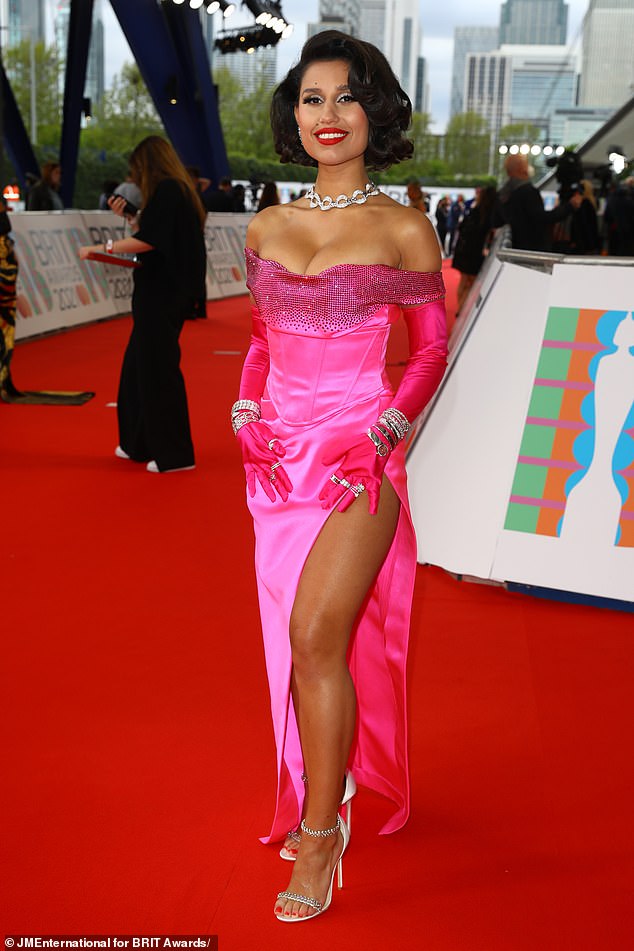 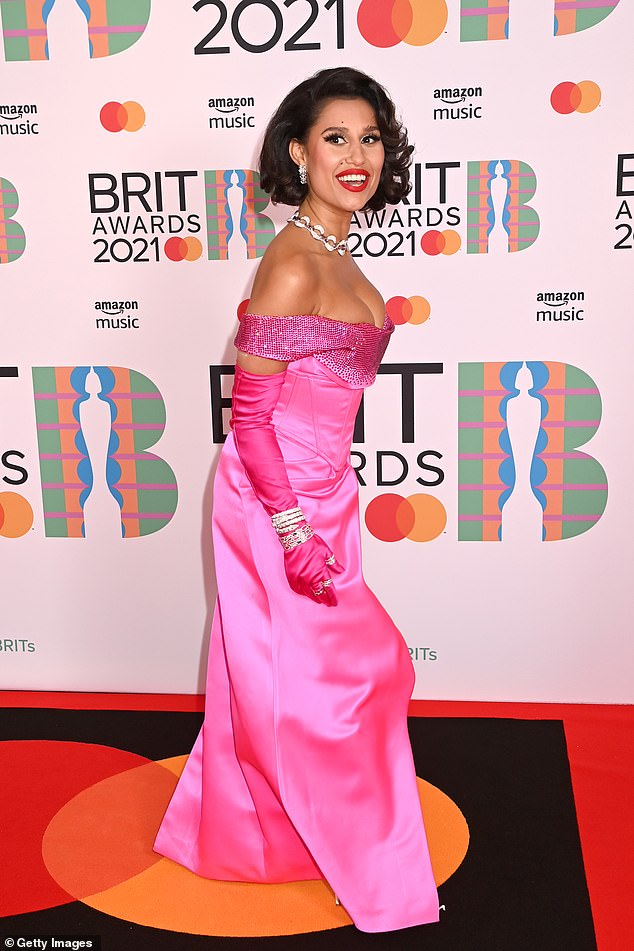 Glowing: Raye looked radiant as she worked the red carpet and added a pop of contrasting colour to her look with a slick of red lip 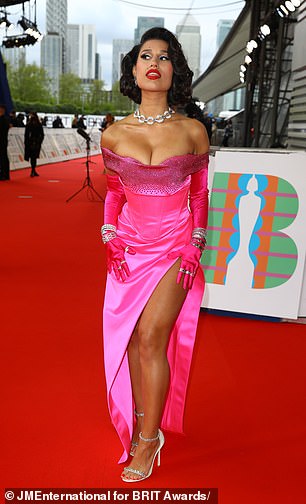 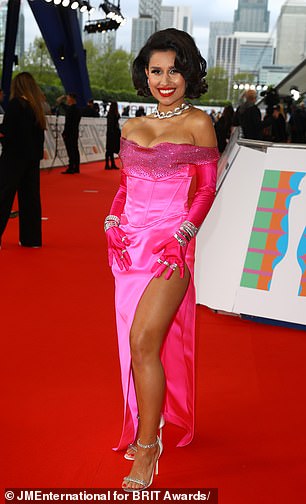 Sultry: Raye worked her best angles in the pink dress as she hit the red carpet ahead of the main ceremony on Tuesday 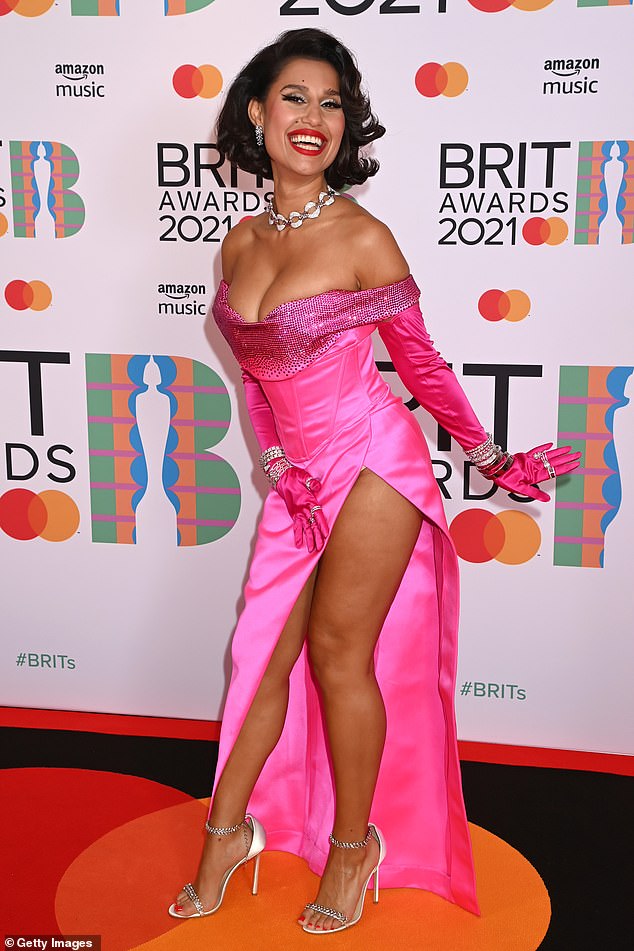 Oops! Raye protected her modesty by holding her dress down as a gust of wind blew in her direction 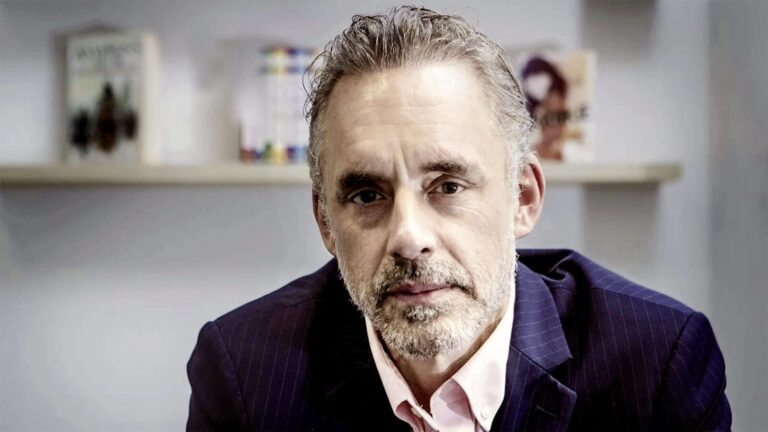 Globalist Jordan Peterson, who has long been controlled opposition meant to undermine nationalism and authentic right-wing conservatism in the West, is coming out of the closet as a major advocate of Big Brother censorship. Peterson’s biggest crusade these days is instituting a digital ID to prevent anonymous trolls from hurting his feelings on Twitter. ‘”I’m… 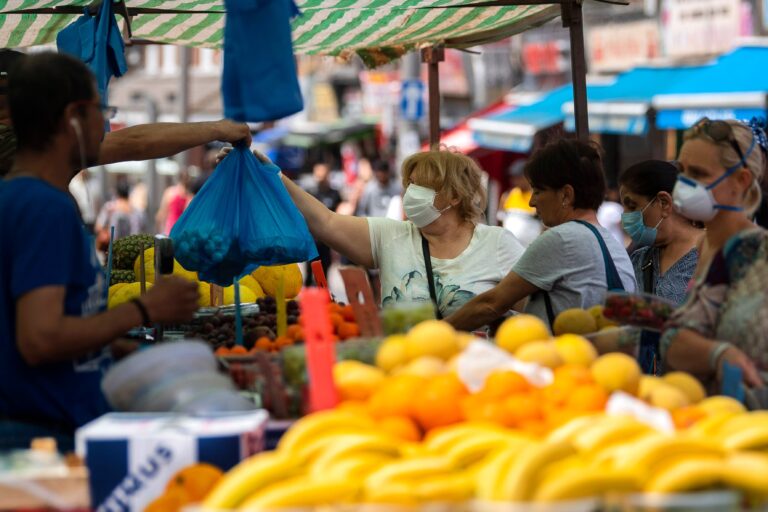 Recent fruit and vegetable vouchers might be given to households to assist them eat extra healthily underneath authorities plans introduced to ‘degree up’ throughout the UK. Medical doctors might be given powers to prescribe tokens, cooking classes and dietary schooling in a bid to deal with Britain’s rising obesity drawback. The UK ranks among the… 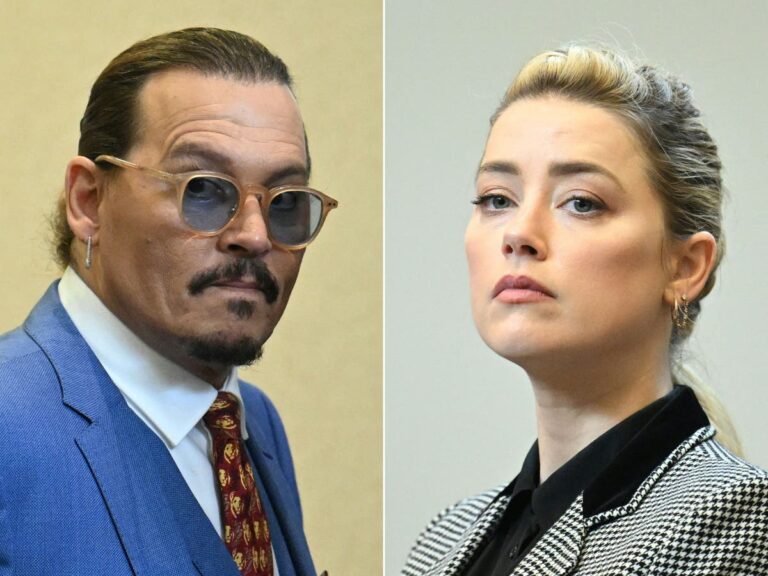 Depp verdict: Actor wins defamation trial as Heard awarded one counterclaim Johnny Depp emerged the victor in his defamation case against ex-wife Amber Heard following three days of deliberations by the jury, which also handed Heard a partial win in her countersuit. Depp sued Heard for $50m for implying he abused her in a 2018Washington… 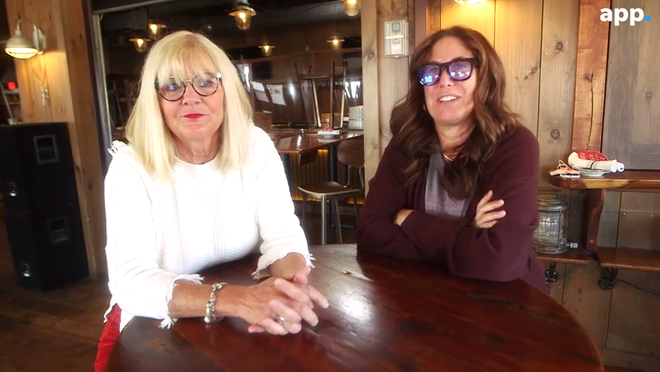 BERKELEY – B2 Bistro + Bar has bought Martell’s Waters Edge with plans to create a eating and leisure vacation spot on the Barnegat Bay, The restaurant, situated at 125 Bayville Ave. or due east of buoy 37 on the bayside, is the B2 Bistro + Bar restaurant group’s sixth B2 Bistro + Bar location and its third in…

Lance Larson and Debbie DeLisa are celebrating their 20th anniversary at the helm of the Wonder Bar with a weekend of shows and Yappy Hours. 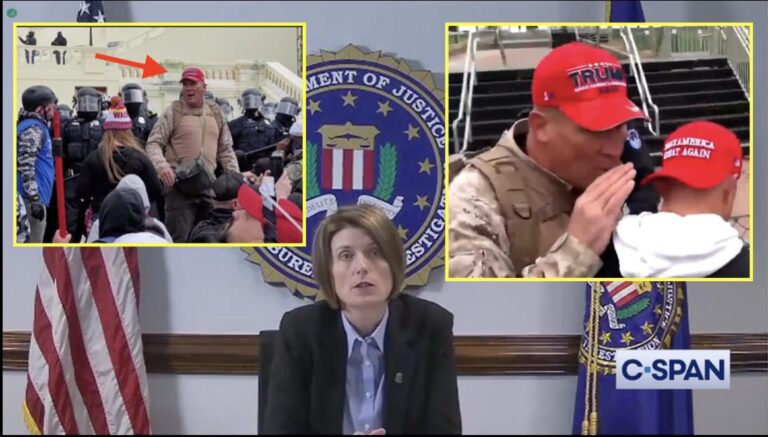 This afternoon, FBI Nationwide Safety Department Govt Assistant Director Jill Sanborn was questioned by the US Senate Judiciary Committee by Senator Ted Cruz (R-TX) on whether or not or not FBI brokers or confidential informants performed a job within the Jan. 6, 2021, Capitol incident that Democrats and their allies within the media have labeled…