Anne-Marie has broken her silence after suffering a dramatic tumble during a live performance at The BRIT Awards on Tuesday evening.

Things took a turn for the worst when the singer, 30, fell down a set of steps while belting out Kiss My (Uh-Oh) in front of a 20,000-strong audience at The O2 Arena.

Her voice wavered as she toppled onto her hands-and-knees but, like a true pro, carried on with the showstopping production.

But she has since made light of the mortifying incident after a good-natured Twitter parody account for her twisted ankle was created by a fan. 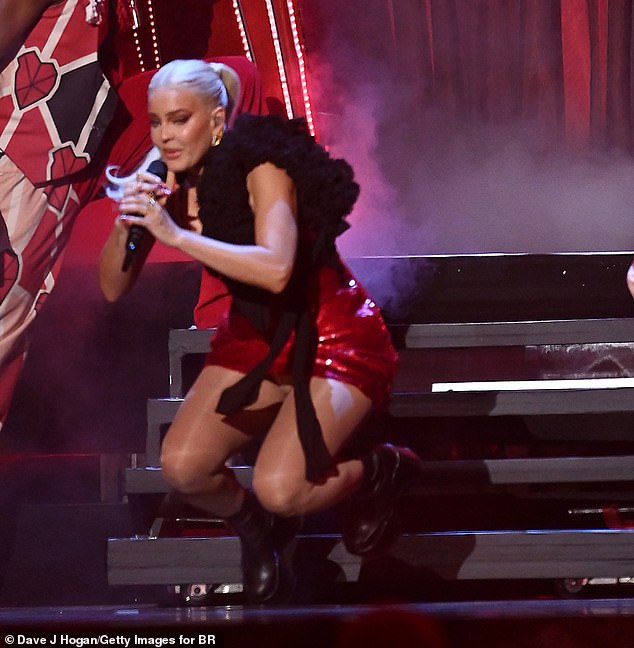 Wow! Anne-Marie received an outpouring of support from viewers after suffering a dramatic tumble during her performance at The BRIT Awards on Tuesday night

Joking about her slip, she tweeted: ‘Didn’t need my left ankle anyway.’

Soon after the incident, the account with the Twitter handle @Annemariesankle started poking fun at the singer.

The singer promptly re-tweeted the post and wrote: ‘I AM DEAD.’

Her fall in front of the nation also saw opticians Specsavers get in on the action and offer Anne-Marie a free eyesight check.

They wrote: Your next visit’s on us,’ prompting the singer to respond with: ‘I’ll be in touch.’

Shrugging it off: She has made light of the mortifying incident, which saw her fall in front of a packed O2 Arena on Tuesday evening 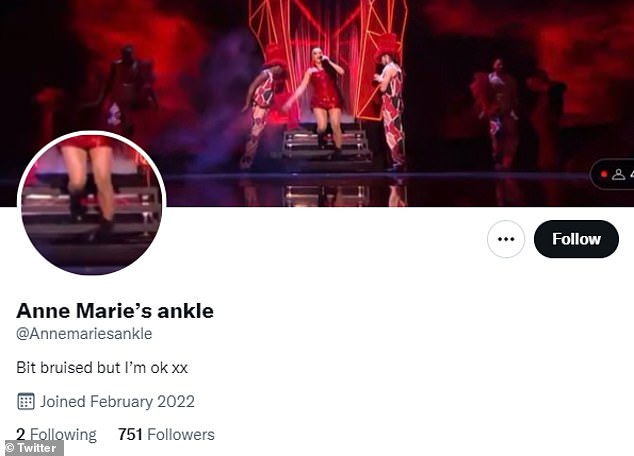 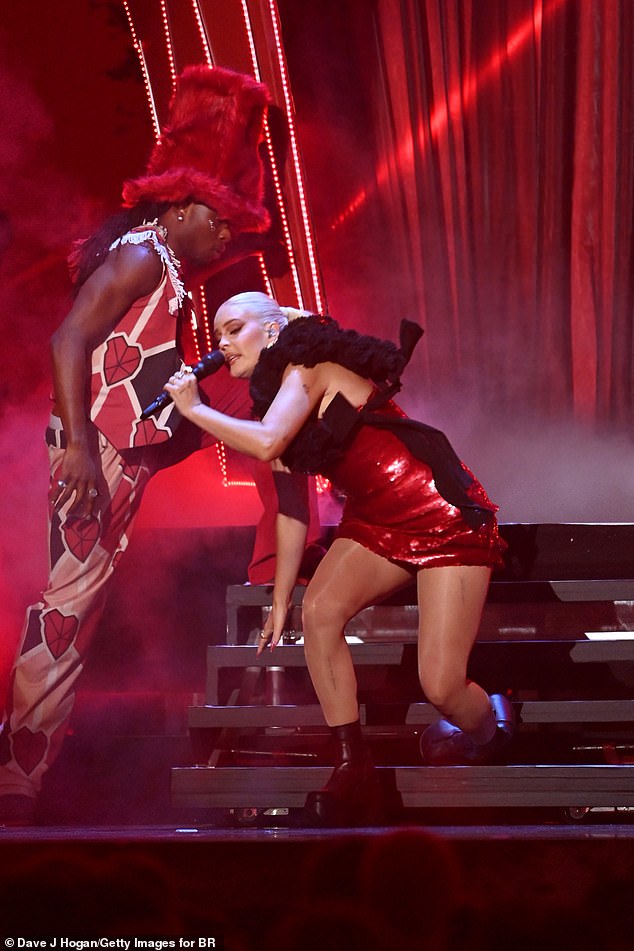 Ouch! Things took a turn for the worst when the singer, 30, fell down a set of steps while belting out Kiss My (Uh-Oh) in front of a 20,000-strong audience at The O2 Arena 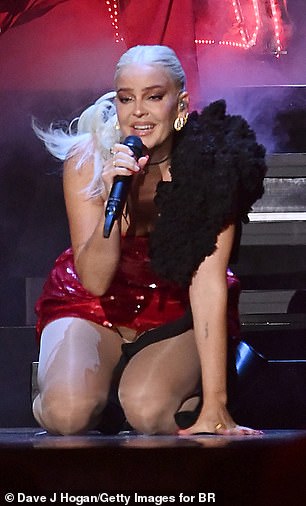 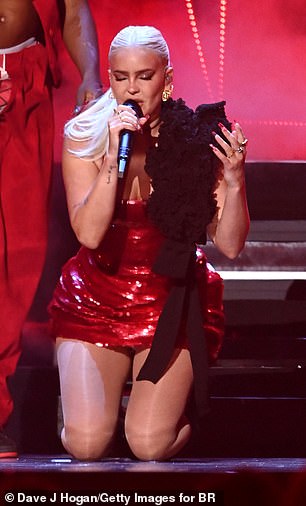 Professional: Her voice wavered as she toppled onto her hands-and-knees but, like a true pro, carried on with the showstopping production 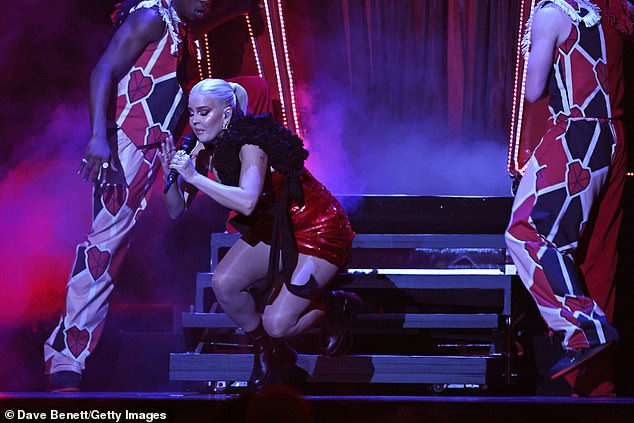 Reassuring: Despite the embarrassing blunder, her adoring fans took to Twitter to voice their support, claiming she has ‘styled it out well’ and proved herself a ‘total pro’

Despite the embarrassing blunder, her adoring fans took to Twitter to voice their support, claiming she has ‘styled it out well’ and proved herself a ‘total pro’.

‘Anne Marie made that fall look like part of the act. Total pro Red heart #BRITs.’

‘@AnneMarie you are my little girls fave. Carrying on like that after falling. She’s impressed, and you showed anything is possible when you try and push on. Hope you are ok. #inspiration.’

‘@AnneMarie what a total pro. Love you even more than ever! Red heart #brits2022.’

‘Gotta give it to Anne Marie for carrying on so effortlessly. Every time I’ve stacked it in the exact same manner I’ve simply wanted to pass away. #Brits.’

‘#thebrits ouch Anne Marie, that’s gonna hurt tomorrow!! What a pro tho, to continue on with an amazing performance.’

Even her backing dancer couldn’t hide his shock as he looked on in surprise at the jaw-dropping spectacle. 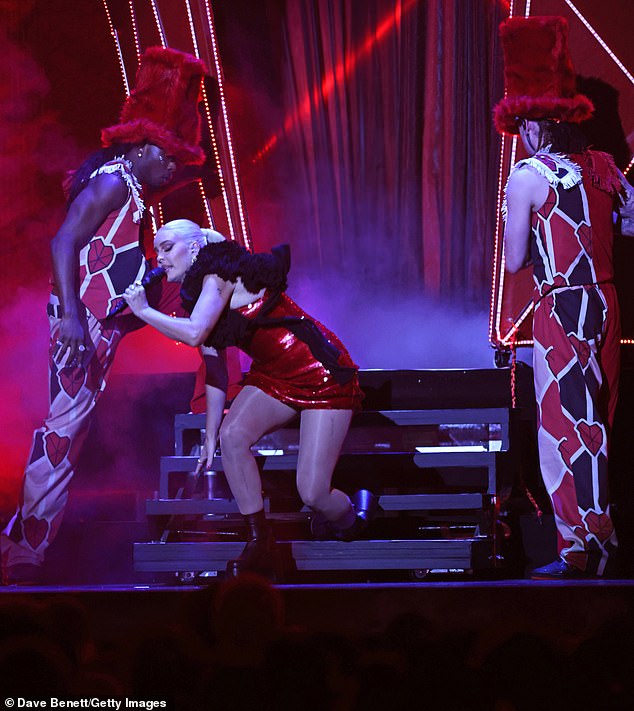 Aaah: The blunder came as a surprise to many viewers 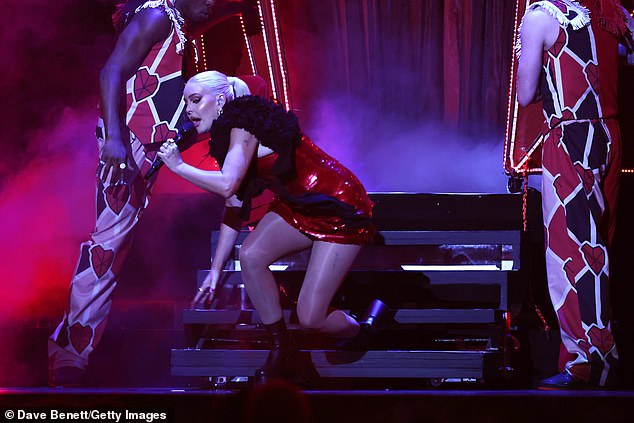 Talented: She attempted to carry on singing while crashing over 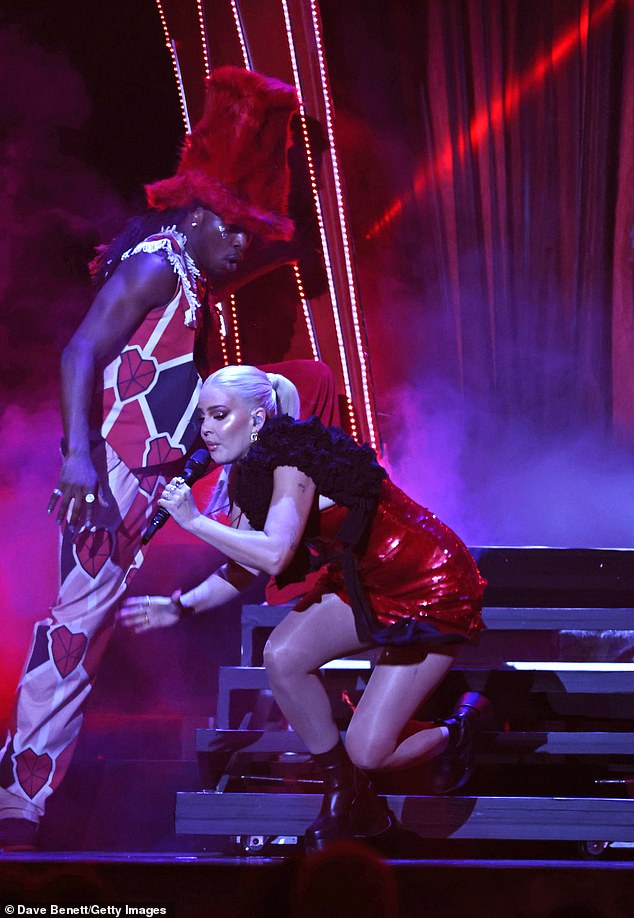 Trendy: She wore a dazzling red minidress which flashed her legs 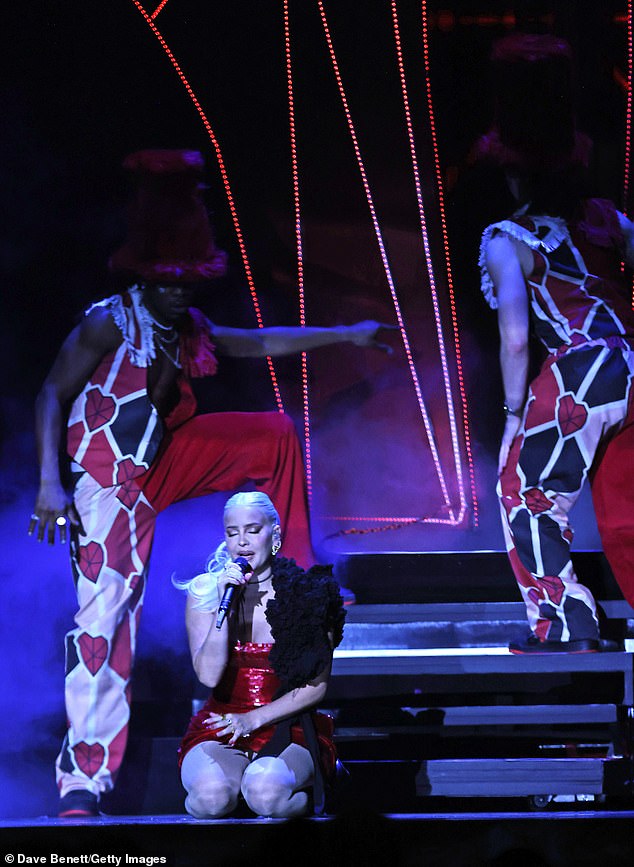 Belting: She sang from the top of her lungs despite falling onto her hands-and-knees

The 2002 songstress was soon joined on-stage by YouTuber-turned-rapper KSI, as they proved themselves to be quite the pairing during a collaboration.

She soon took to Twitter to brush off the controversy, writing: ‘Didn’t need my left ankle anyway.’

Anne-Marie ensured she caught the eye of onlookers as she went without a bra at the event’s red carpet earlier in the night.

The hitmaker showcased her impressively flat stomach as she opted for a skimpy black wrap-around string top which left little to the imagination. 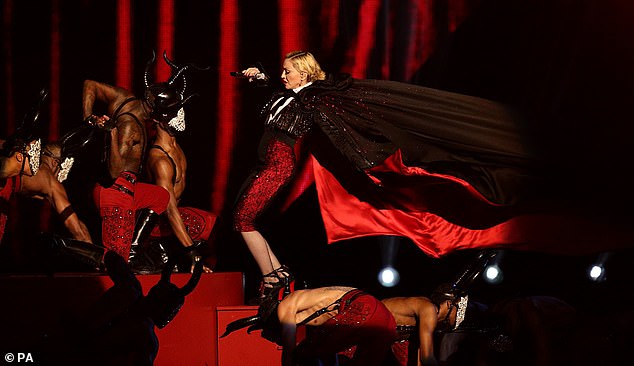 Who could forget? In 2015, Madonna claimed the suffered whiplash after taking a nasty fall during her performance of Living For Love at the awards ceremony (pictured in 2015)

She opted for a black leather jacket which she wore open at the front to leave plenty of skin on show.

The songwriter wore a pair of chic floor-length trousers in black to match the rest of her attire.

She wore her hair slicked back into a ponytail and accessorised with a pair of gold earrings.

Anne-Marie wore lashings of make-up to highlight her pretty facial features and posed up a storm as she arrived at the venue. 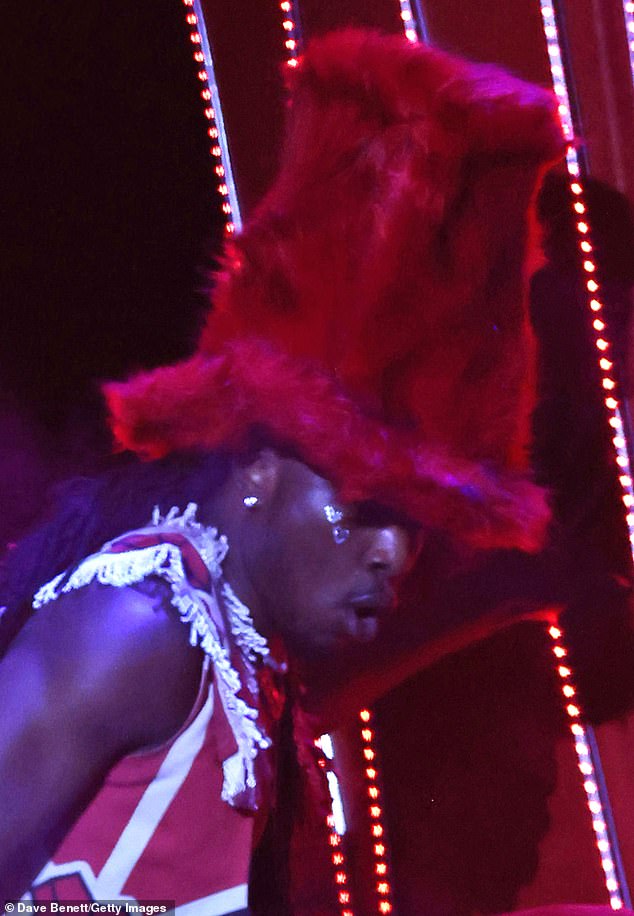 Woah: Even her backing dancer couldn’t hide his shock as he looked on in surprise at the jaw-dropping spectacle 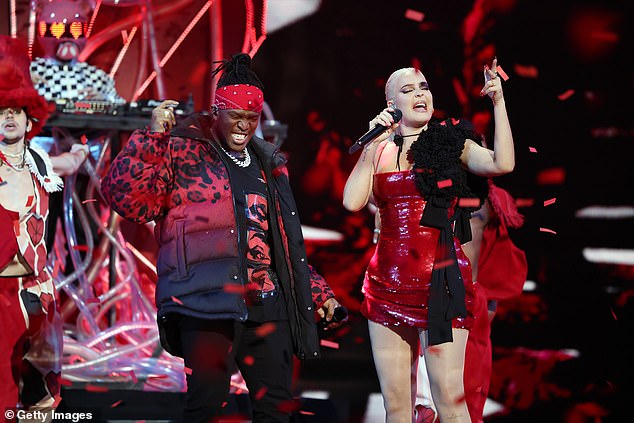 What a pair! The 2002 songstress was soon joined on-stage by YouTuber-turned-rapper KSI 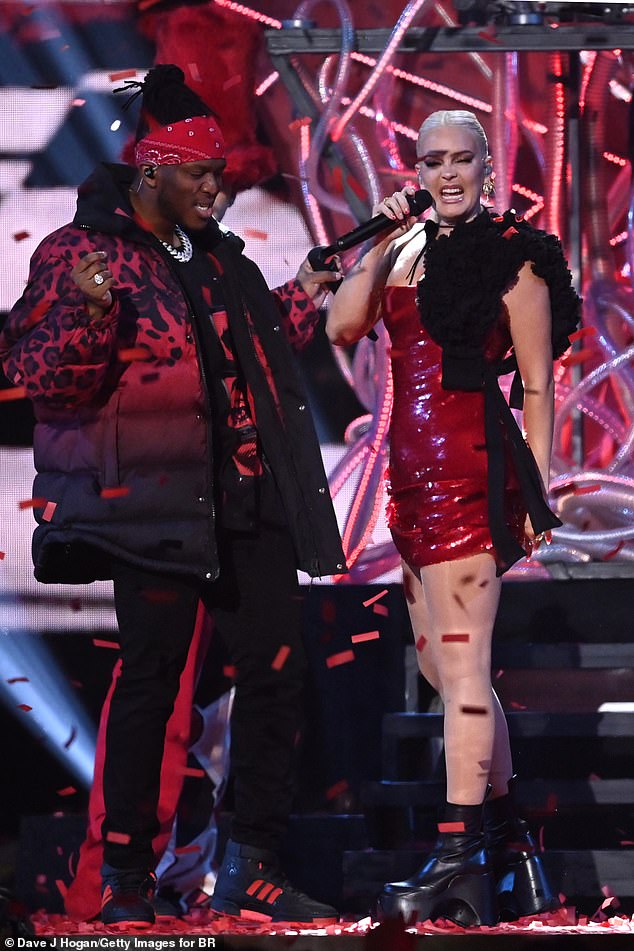 Pals: They proved themselves to be quite the pairing during a collaboration

It was a huge night for music at the Brit Awards on Tuesday evening – with Adele taking home three gongs at the O2 Arena, including in the first ever genderless Artist Of The Year gong after the male and female categories were scrapped.

The Easy On Me singer, 33, also won the award for Song Of The Year and the coveted Album Of The Year after being nominated for four gongs along with Ed Sheeran, who gave two performances on the night.

The ceremony kicked off at 8pm on ITV and was presented by Mo Gilligan for the first time, with Maya Jama hosting the red carpet.

The show got off to a bang with a spectacular theatrical performance from Ed with a new version of Bad Habits, for which he was joined by special guests Bring Me The Horizon.

With medleys and music legends at the heart of the BRITs on-stage performances, Anne-Marie – who fell over during her performance – and KSI along with Digital Farm Animals delivered a show-stopping three song set whilst rock royalty Liam Gallagher braved a helicopter to the O2 arena to perform his new single Everything’s Electric. 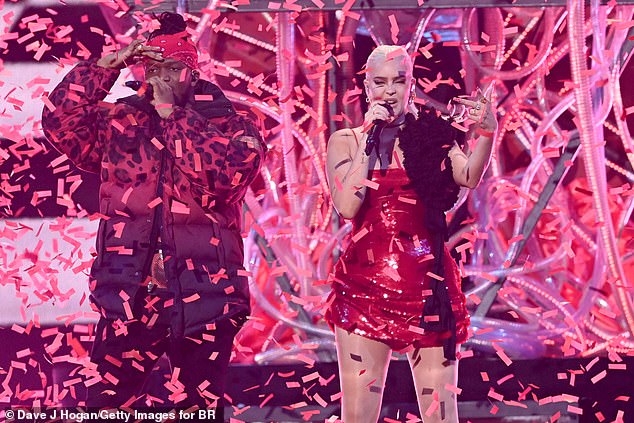 Spellbinding: The entertaining performance was finished off with a helping of confetti 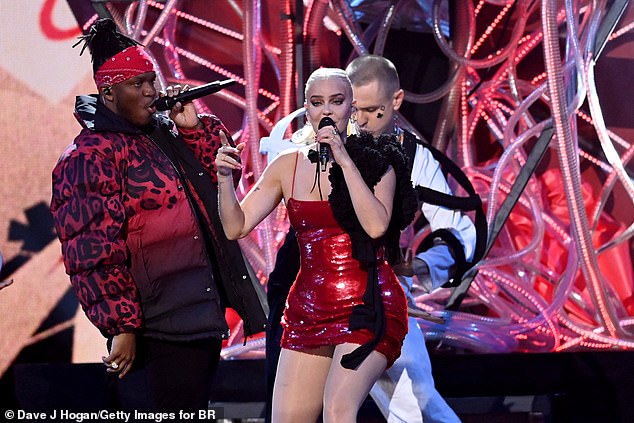 Accessorising: Anne-Marie threw a black furry number over her shoulder

The 2022 BRIT Awards was truly Adele’s night and she performed a stripped-back version of her power-ballad I Drink Wine before winning three awards, bringing her complete tally of BRIT trophies to 12 since winning the first ever Rising Star award in 2008.

Adele was presented with the prestigious Mastercard Album of the Year for the third time, having won for her previous two albums in 2012 and 2016 – the only solo artist in BRITs history to have won this award three times.

The songstress also became the first ever recipient of the BRITs’ inaugural Artist of the Year award, with her third victory claimed with the win for Song of the Year for Easy On Me.

The International counterparts to these new categories similarly saw two unbeatable global artists celebrated; with Billie Eilish picking up International Artist of the Year and Olivia Rodrigo presented with International Song of the Year for Good 4 U – the biggest selling international single of the year in the UK.

Fans: One user wrote: ‘Think Anne-Marie styled that out well, props to her, true pro #BRITs’

Pro: She soon took to Twitter to brush off the controversy, writing: ‘Didn’t need my left ankle anyway’

Making her BRITs debut both on stage with an electrifying two-song performance, and in this year’s shortlists, Little Simz was presented with Best New Artist, beating off competition from Central Cee, Griff, Joy Crookes and Self Esteem.

She was joined on stage by actress Emma Corrin. The Mercury Prize winning London band Wolf Alice won Best Group, the second year they had been nominated in this category.

The 2022 BRITs Rising Star shortlist saw three incredible female artists compete for the coveted prize, as chosen by critics and heads of music to identify the future stars of British music.

Winner Holly Humberstone got to perform to her biggest audience yet with a rendition of her new single London is Lonely, and was introduced on stage by last year’s Rising Star recipient, Griff. 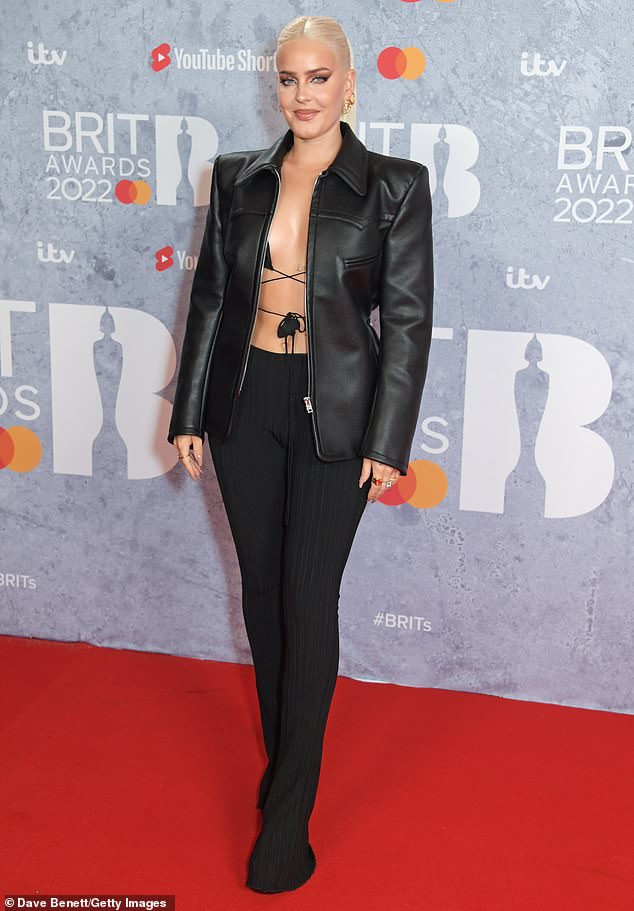 In style: Anne-Marie ensured she caught the eye of onlookers as she went without a bra on the red carpet

The BRITs in 2022 saw a number of changes to awards categories in order to create even more opportunities for artists to be recognised.

The recipient of the BRITs’ first ever Songwriter of the Year award tonight went to Ed Sheeran before he performed a second number, The Joker and The Queen later in the show.

Having picked up two awards last year, Dua Lipa, was awarded with Pop/R&B Act, and having received her first ever BRIT nominations this year Becky Hill was awarded Dance Act.

Alternative/Rock Act went to Sam Fender (bringing his UK record label Polydor’s tally of trophies up to 5), who later in the show went on to wow the audience with a performance of his Top Ten hit single Seventeen Going Under.

British rap royalty Dave was presented with the award for Hip Hop/Grime/Rap Act by Arsenal legends Ian Wright and Bukayo Saka, and closed the ceremony with a triumphant performance of In The Fire, where he was joined by fellow rappers Ghetts, Giggs, Fredo, Konyikeh and Meekz.

Britain is spending millions of pounds a year on...
Entertainment

Amber Heard has asked a Virginia judge to toss...
News

TOWIE star Yazmin Oukhellou's mother has flown out to her...
Bio

Who is Netty Plays? Annette Garrett was born on 7...
Business

Rules governing childminders and nurseries in England could be...
Sport

President Joe Biden’s job approval rating is down to...
Bio