British tourist, 33, falls to his death from seventh floor of Magaluf hotel

A British tourist has died after falling from the seventh floor balcony of a hotel where he was staying with family in Magaluf.

The 33-year-old died instantly after plunging from the Melia South Beach Hotel around 8.30am Thursday.

The man was staying with a member of his family at the hotel and witnesses reported hearing ‘shouting’ shortly before he fell, a police source said. 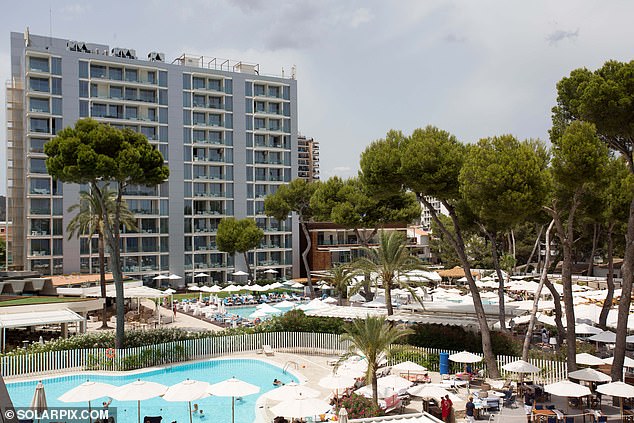 A 33-year-old British man has fallen to his death from the seventh floor of the Malia South Beach hotel in Magaluf (pictured), local police said on Thursday

Civil guard sources said the man was ‘behaving strangely’ just before the fall.

A well-placed source close to the case added: ‘He plunged from the seventh floor of a hotel called South Beach in Magaluf.

‘At the moment it is being treated as an accident rather than a crime although the dead man is thought to have been with other people when this drama occurred.’

One unconfirmed local report said two female friends he had met the previous night while out partying were in a room at the hotel.

The hotel has four pools and a spa with a sauna and Turkish bath as well as an elegant beach club. It used to be called ME Mallorca.

TripAdvisor describes it as an ‘ideal place for stylish vacations.’

It adds: ‘The music, the sun and the fashion are the main protagonists of the hotel, which will immerse you into vibrant and chic summer ambiance, with relaxing days and nights to remember.’

A spokesman for a regional government-run emergency response coordination centre confirmed: ‘We got the first call at 8.39am this morning morning.

‘Ambulances, local police and Civil Guard were sent to the scene but there was nothing that could be done to save the man who was subsequently declared dead.’

A receptionist at the hotel where the incident occurred said: ‘It’s all very recent and we’re not making any comment at the moment.’

The House of Representatives on Wednesday night passed a bill to provide $28million in emergency funding to address the...

19 May 2022‘The Hills’ is returning with a new cast.Audrina Patridge starred in the original version of The Hills The...

The House of Representatives on Wednesday night passed a...
Celeb Zone

Did Dr. Brady McKee Get Into the Accident? Death...
Celeb Zone

Martin Fajardo Ethnicity: Where Is He From? Explore His Family Background

Anthony Brandon Wong is a male entertainer understood for...
News

Does Simon Dallow Have Illness? Health Problems And Sickness Update

Simon Dallow has not shared any prevailing Illness And...
- Advertisement -