A Tale of Two Videos: While Kiley Owns the Space, Newsom’s Anti-Recall Ad Smacks of Desperation

House GOP Leader Kevin McCarthy on Wednesday pulled all five of his nominees to the special committee investigating the January 6th MAGA riot after Speaker Nancy Pelosi rejected two of them.

Each side accused the other of playing politics with the panel tasked to study the origins and effects of the riot, which resulted in five deaths and damage to historic artifacts in the Capitol.

McCarthy charged Pelosi with ‘playing politics’ and creating a ‘sham process’ with her decision to reject Republican Congressmen Jim Banks and Jim Jordan, both strong allies of former President Donald Trump, from serving on the panel.

Both men voted to challenge certification of President Joe Biden’s election victory and have promoted the ‘big lie’ – the false argument that Trump actually won in 2020 and was the victim of election fraud.

Pelosi said in a statement she made her decision based on the ‘integrity’ of the investigation.  As speaker, Pelosi has final say on who sits on the panel.

‘With respect for the integrity of the investigation, with an insistence on the truth and with concern about statements made and actions taken by these Members, I must reject the recommendations of Representatives Banks and Jordan to the Select Committee,’ Pelosi said in a statement.

McCarthy slammed Pelosi for her decision.

‘Why are you allowing a lame duck speaker to destroy this institution? This is the people’s house. Not Pelosi’s house,’ he said in a hastily arranged press conference on Capitol Hill.

Pelosi is not a lame duck speaker. Republicans would have to win a majority in the 2022 election for that to happen.

McCarthy vowed to hold his own investigation that he said would include a look at Trump’s role in the January 6th riot, where the former president’s supporters stormed the Capitol to interrupt the certification of Biden’s presidential victory.

‘This represents an egregious abuse of power and will irreparably damage this institution,’ McCarthy said in a statement blasting Pelosi’s move, saying it showed ‘this panel has lost all legitimacy and credibility and shows the Speaker is more interested in playing politics than seeking the truth.’

The House Select Committee to Investigate the January 6th Attack on the U.S. Capitol’s investigation was expected to be highly contentious.  The panel will hold its will hold its first hearing in six days, on Tuesday, July 27. 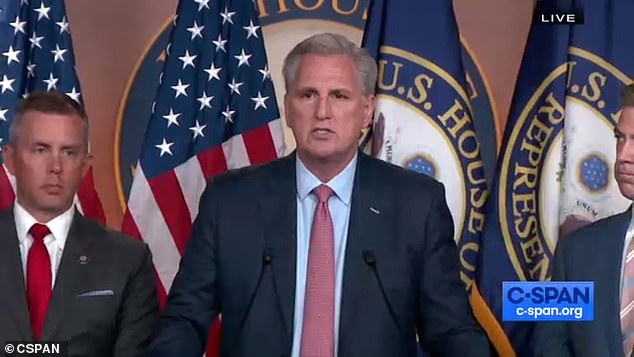 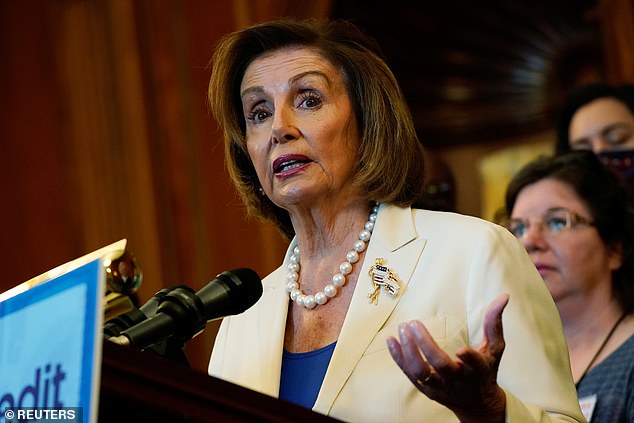 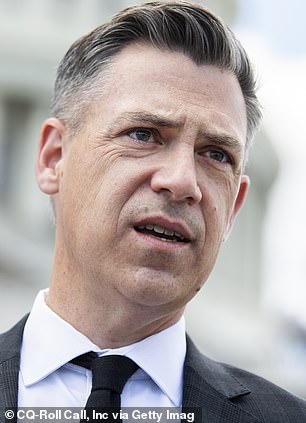 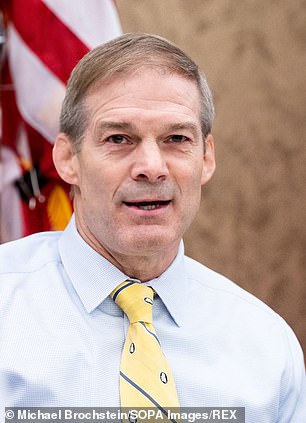 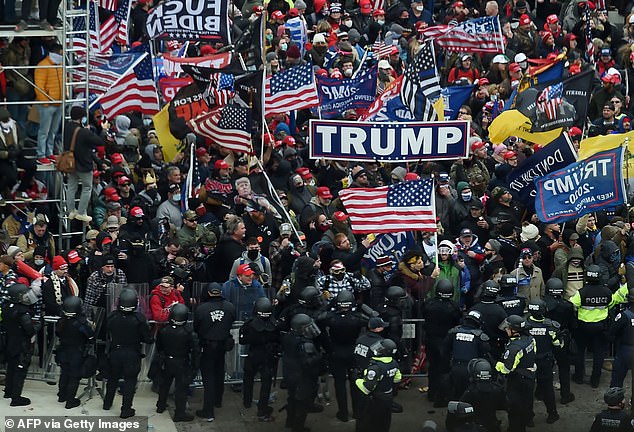 Democrats pushed for the creation of a 9/11-style commission to investigate January 6, but that was tanked by Senate Minority Leader Mitch McConnell. Instead the House is forming a 1/6 select committee to probe the Capitol riot (pictured)

But Pelosi’s rejection of two of the other party’s picks is unprecedented. Leaders of the respective parties usually respect each other’s decisions.

‘We need a comprehensive investigation as to who organized this attack, who paid for it, how they nearly succeeded in overthrowing a presidential election, why they did it and how we must organize ourselves to prevent anything like it from ever happening again,’ she said in her statement.

Jordan was among the group of House Republicans who met with Trump in December to help plan the effort to challenge Biden’s victory. Democratic members of the committee were considering calling him as a potential witness in their investigation.

He was a fiery defender of Trump when he sat on the panel investigating Trump’s first impeachment.

Banks helped arrange for House Republicans to join the former president on a recent trip to the border.

He was to serve as ranking member but, shortly after McCarthy appointed him to the panel, Banks put out a statement blasting its creation, saying it was done so ‘solely to malign conservatives and to justify the Left’s authoritarian agenda.’

McCarthy named his five members of his party to the panel on Monday. He also appointed Rodney Davis, Kelly Armstrong and Troy Nehls to the committee.

Nehls also voted against Biden’s election certification. But Pelosi said she would accept those three lawmakers to serve.

Republicans opposed Pelosi’s original call for a 9/11-style bipartisan commission. McCarthy opposed it in the House where it passed with Democratic support. But the bill died in the Senate once Senate Minority Leader Mitch McConnell announced he would not support it.

Republicans wanted the commission to have a larger scope – and not just study what happened on January 6, but other acts of so-called ‘political violence’ including last summer’s Black Lives Matter protests. 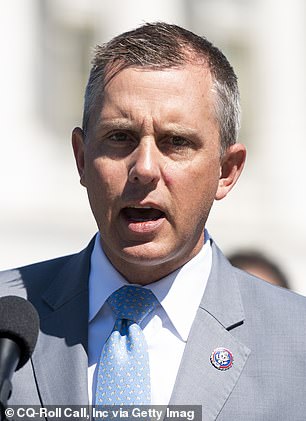 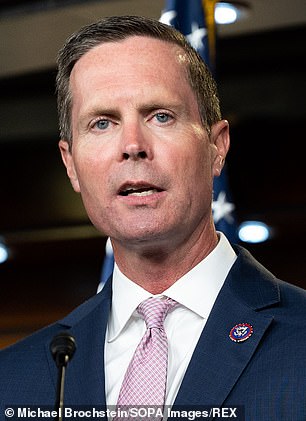 Pelosi earlier this month announced eight members of the committee, including one Republican, Rep. Liz Cheney, who has been one of the most prominent critics of former President Donald Trump.

McCarthy said at the time he was shocked that Cheney would accept Pelosi’s invitation to be on the committee.

The special congressional panel was created to investigate the events leading up to and on January 6, when Trump supporters stormed the Capitol in an attempt to stop Democrat Joe Biden from being certified the winner of last November’s presidential election against Trump.

Republican leaders resisted any special panel to investigate the deadly Capitol assault, noting existing congressional committees had been doing their own probes and that more than 500 people had already been charged with crimes. 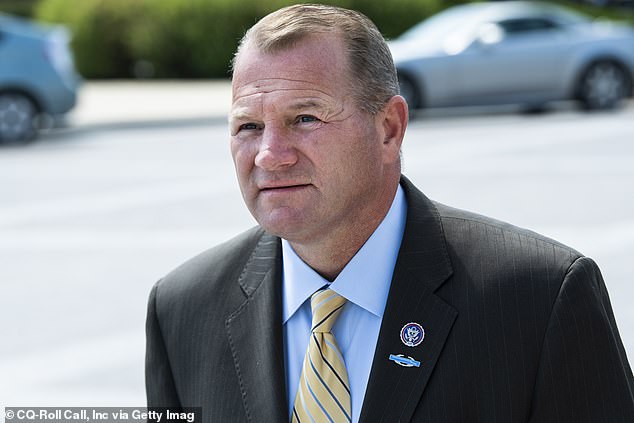 Rep. Troy Nehls, a Republican from Texas, was picked by House Minority Leader Kevin McCarthy to serve on a 1/6 select committee

Some Republicans have downplayed the attack, with Rep. Andrew Clyde comparing it to a visit by tourists.

Four people died on the day of the violence, one shot dead by police and the other three of natural causes.

A Capitol Police officer who had been attacked by protesters died the following day.

Just before the attack, Trump delivered fiery remarks at the White House and then encouraged his supporters to march to Capitol Hill.

Jordan is a member of the conservative group of lawmakers known as the House Freedom Caucus.

Banks chairs the Republican Study Committee, the largest conservative grouping in the House.

Davis is the senior Republican on the House Administration Committee, while Armstrong served on the House Judiciary Committee during the first Trump impeachment.

Nehls is a freshman representative.