Carlos Ponce is a Puerto Rican actor, musician, model, as well as a television personality who started his acting career by participating in the Spanish language soap operas for “Televisa” and “Telemundo”. He has appeared in a number of films as well. He played Salvadore in “Couples Retreat”, Matthew Wright in “Spy” and Rodrigo in “Deuce Bigalow: European Gigolo”. His television work includes Felix Gonzalez in “Cristela”, Max Duran in “Hollywood Heights”, as well as voicing Santiago Santos in “Maya & Miguel”. As a singer, he released his first album “Carlos Ponce” which was followed by “Todo lo que Soy” (Everything that I Am) and “Ponce”.

After the success of “The House of the Famous”, Carlos Ponce arrives, at the new reality TV contest “Por amor o por Precio”, which has 16 contestants who live together and scramble in a tropical paradise. “There is nothing predictable,” said the Puerto Rican actor and singer about the competition that takes place in a luxurious Oasis, where 8 singles and 8 single women face challenges … while 60 hidden cameras and microphones capture everything that happens day and night. In this way, the gossipy viewers, who follow them 24/7, take a look at the protagonists, to see if among partying, swimming pool, and party they find the person who will tinker-tinkle them. Each night, a winning couple will receive a reward that they can share with two other contestants of their choice, and – every Friday – one participant will receive a nomination to withdraw from the Oasis. In the end, the winning couple – chosen by the public vote, will win a prize of $ 200,000 … Will Carlos Ponce the Matchmaker Cupid find the perfect couple who will take love and all the money in a romantic marriage?

What is Carlos Ponce Famous For? 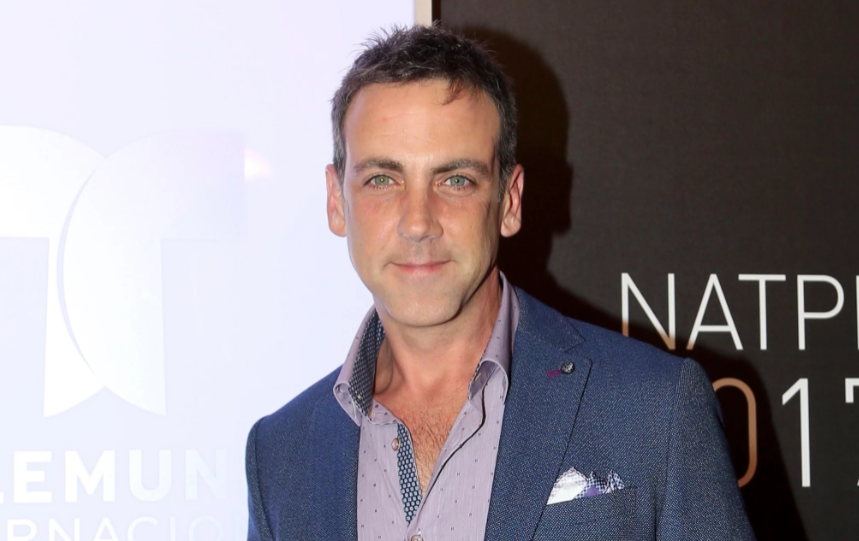 What Nationality is Carlos Ponce? Know About His Birthplace, Ethnicity, and Parents

Carlos Ponce’s born name or real name is Carlos Armando Ponce Freyre, Jr on 4th September 1972. He is from Santurce, Puerto Rico. Thus, he holds Puerto Rican nationality. He belongs to the Hispanic ethnic background as he is of Cuban descent. Ponce celebrated his 49th birthday as of 2021. Virgo is his Zodiac sign and he follows the Christianity religion. About his parents, he was born to his father, Carlos Ponce Sr., and his mother, Esther Freyre. He grew up with three siblings namely Francisco Ponce (Brother), Marivi Ponce (Sister), Lilly Ponce (Sister). His parents emigrated from Cuba after the Cuban Revolution led by Fidel Castro. After his birth, the family moved to Humacao, where Ponce was raised. As a child, he actively participated in his school’s plays and at home, he would often put on a show for the family where he would sing the latest tunes.

Regarding his educational background, Ponce studied at a high school in Humacao where he was a member of the school’s drama club. After then, he attended South Miami Senior High, a high school located in Miami-Dade County, Florida. He was named the best student actor in the southern region of the United States. He then participated in the Southeastern Theatre Conference in the year 1990 and won a scholarship to the New World School of the Arts conservatory. However, he later quit his university education after he was offered to host a show called Hablando (Talking) by the Spanish-language television station Univision.

Carlos Ponce is a married man as he tied a knot to his beautiful wife, Karina Banda (Mexican journalist). Carlos Ponce and Karina Banda have secretly married during an intimate ceremony that took place on July 30 in Florida. The couple reveals the details of the event which featured the daughters of the singer, Sienna, and Savannah, as witnesses to the civil union that took place practically without guests and in the deepest secrecy. After three years of romance and in the midst of forced confinement due to the pandemic, happiness has arrived for both in the form of a wedding that, although secret, has not been entirely unexpected since the couple had gotten engaged on the eve of the Year New from this ineffable 2020. Their bond is going strong with the passage of time. They both are supportive of each other. They are enjoying their present life a lot. His sexual orientation is straight and he is not gay. 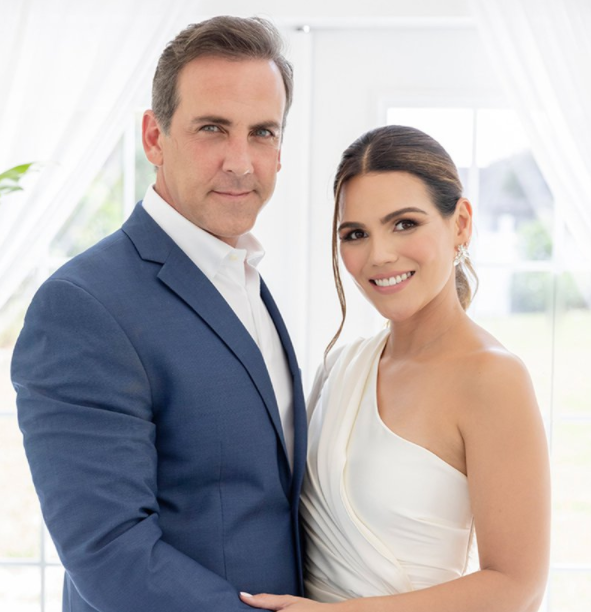 Previously, Ponce got married to his high school sweetheart, Verónica Rubio who is a photographer by profession. They married in 1996. Veronica is the sister of lawyer and politician Marco Rubio who has also served as a U.S. Senator. The lovely couple was blessed with four children namely Giancarlo (b. 1999), Sebastián Joel (b. 2001), and twin daughters Siena Natasha and Savanna Ala (b. 2002). Later, they divorced in the year 2010. After then, he was romantically involved with Colombian actress and model Ximena Duque from 2010 to 2016. 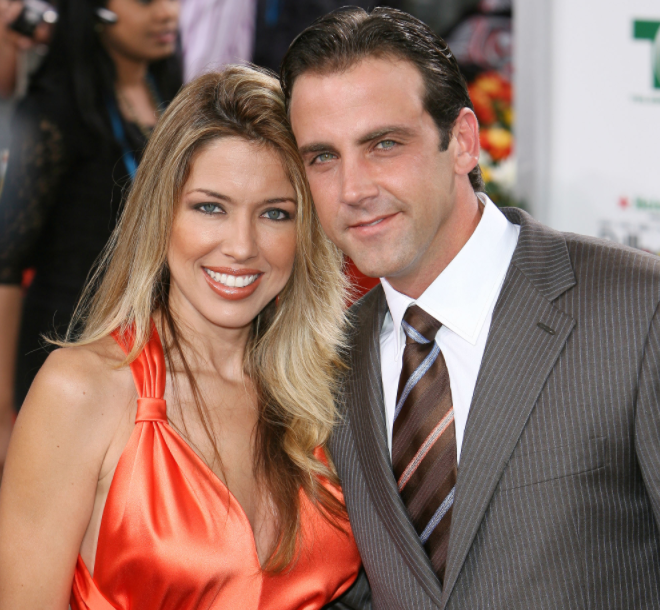 What is the Net Worth of Carlos Ponce?

Carlos Ponce is a Puerto Rican actor, singer, composer, and television personality profession. The net worth of this multi-talented personality is estimated to have $8 Million as of 2021. His main source of wealth comes from the music industry and entertainment career through releasing various albums and by appearing on television. His other career earnings and salary details have not been revealed yet but there is no doubt in the mind of his followers that he is making a cool amount of money from his earnings. He is living a lavish lifestyle from his career. He is satisfied with his earnings at present. He has also done endorsement work for Starmedia.com.

How tall is Carlos Ponce?

Carlos Ponce is a handsome actor as well as a musician. He has a tall height of 6 ft 1 in and his body weight consists of 77 Kg or 170 lbs. His body type is athletic. His hair color is salt and pepper whereas he has an attractive pair of blue eyes. He has a deep-set eye. His other body size is still to be disclosed. He maintains his body by doing frequent exercise. Overall, he has got a healthy body with a charming smile.

A euro currency symbol sits on display in the visitor centre at the European Central Bank (ECB) building in...

Holidaymakers were today forced to sleep by the bins in Heathrow as Britain’s airport chaos took yet another turn...

Getty Images Kevin Durant of the Brooklyn Nets. A reunion between Kevin Durant and the Golden State Warriors has sparked some...

A couple of days ago President Biden took a break from blaming Vladimir Putin and “Russia Russia Russia” for...
- Advertisement -

A baby born with four arms and four legs has been hailed as a "miracle of...

Victor Joseph Mete is an expert ice hockey defenseman for the Ottawa Senators of the National Hockey League. The...

A couple of days ago President Biden took a...
News

Harry Enten is fired up for republican turnout…

One of Boris Johnson’s ministers has publicly criticised the...
News

The Boys Spotlights The Deep’s Only Respectable Quality

‘Zackly. What could possibly go wrong? Moreover, it’s not...
News

A red flag law, a waiting period for gun...
News

With the hot days of summer here, these are...
News

Astronomy Photographer of the Year shortlist is revealed

Dominic Raab was this morning ambushed in a TV...
- Advertisement -