Robert Williams III has been on and off the Boston Celtics injury report throughout the 2022 NBA Playoffs because of a knee injury. During Game 2 of the 2022 NBA Finals, Williams had an injury scare when Marcus Smart inadvertently fell into the back of Williams’ knee while trying to get a shot up against the Golden State Warriors.

Williams was quick to sub out for Grant Williams and did not return to the game, causing many to speculate if he had worsened the knee injury that has had him miss multiple games throughout the 2022 NBA Playoffs.

On June 7, 2022, Head Coach Ime Udoka said that Williams was fine after the fall and only stayed down on the floor to make sure that he was okay before getting back into the play.

#NEBHInjuryReport Ime Udoka says Robert Williams is fine after taking a fall during Game 2. He says Williams stayed down on the floor just to make sure he was OK before continuing to play.

No one should blame Williams for being cautious knowing what he’s dealing with. The question is, even if that play did not lead to any more damage than Williams has already suffered, how durable will he be for the rest of the finals? 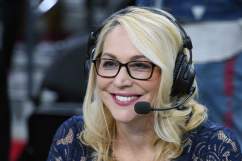 Even though Udoka relayed that Williams is fine after taking a fall like that during Game 2, Williams has still been listed as questionable on the Celtics’ injury report for Game 3.

Williams has been on the injury report for almost every game in the 2022 NBA Playoffs ever since he returned to play for the Celtics against the Brooklyn Nets in Game 3 of the first round. The last time he missed a playoff game was Game 3 of the 2022 Eastern Conference Finals against the Miami Heat.

What’s more encouraging is that no one else on the team is on the injury report. Marcus Smart was on the first injury report for Game 1 of the finals but was taken off and has not re-appeared since.

Rob Williams QUESTIONABLE for Game 1.
Marcus Smart is no longer on the injury report.

Boston has had its surprises in the 2022 NBA Playoffs. Al Horford made a surprise appearance on the injury report in Game 1 of the conference finals because he was put in health and safety protocols. He was then cleared for Game 2. Udoka also said before the finals started that Williams will be day-to-day throughout the entire series.

Williams Statistical Impact on the 2022 Playoffs

Before he tore his meniscus, Williams averaged 10 points, 9.6 rebounds, two assists, and 2.6 blocks a game in the 29.6 minutes he played in 61 games in the 2021-22 regular season. Because he came back in the playoffs while coming off a meniscus tear, Williams’ numbers in the postseason are down compared to his numbers in the regular season.

In the 13 games he’s played in the 2022 NBA Playoffs, Williams is averaging 7.4 points, 5.2 rebounds, 2.1 blocks, and 0.7 assists in 21.1 minutes a game. Since Williams has been on the injury report throughout most of the postseason since coming back from his meniscus tear, it makes sense that Boston would be cautious with how many minutes he plays from here on out.

They will need as much as they can get from Williams because Al Horford can only do so much at 36 years old, Grant Williams has only played in 37 minutes thus far in the finals, and Udoka is relying on Theis for spot minutes.

Nadjaya Delgado is a renowned TikTok star from the United States. Nadjaya has roused millions with her imaginative thoughts...

The Babylon Bee CEO Seth Dillon and the most popular podcast host, Joe Rogan, discussed abortion on a recent...

Follow us on Telegram for the latest updates: There has been a shake-up at the Aljunied-Hougang Town Council...
- Advertisement -

Nadjaya Delgado is a renowned TikTok star from the...
News

The Babylon Bee CEO Seth Dillon and the most...
Bio

‘Britain’s roughest nightclub’ has been shut down in a...
News

A festival-goer has captured the dramatic moment a mini...
Celeb Zone