A viral TikTok trend which sees groups of young people wearing suits during screenings of Minions: The Rise Of Gru is costing cinemas across Britain thousands of pounds in refunds.

The trend, often accompanied by cheering, clapping and shouting, sees hordes of teenage boys dressing up in suits to watch the new movie – and has led to some UK cinemas banning groups of young people wearing suits.

The TikTok videos involve groups, who call themselves ‘The Gentleminions’, filming themselves going to watch the latest instalment in the Despicable Me franchise dressed in suits.

It is not yet clear where the trend originated, but the #gentleminions videos show suited groups attending the screenings and copying the main character, supervillain Felonius Gru, and his signature hand gesture.

Despite cinema audiences enduring rowdy behaviour, movie studio Universal Pictures, which produced the film, endorsed the #gentleminions trend, tweeting: ‘To everyone showing up to @Minions in suits: we see you and we love you’.

But one manager of a Vue Cinema in Worcester said they had to issue £1,300 worth of refunds in a single day due to complaints from customers about bad behaviour by the young people dressed in suits. 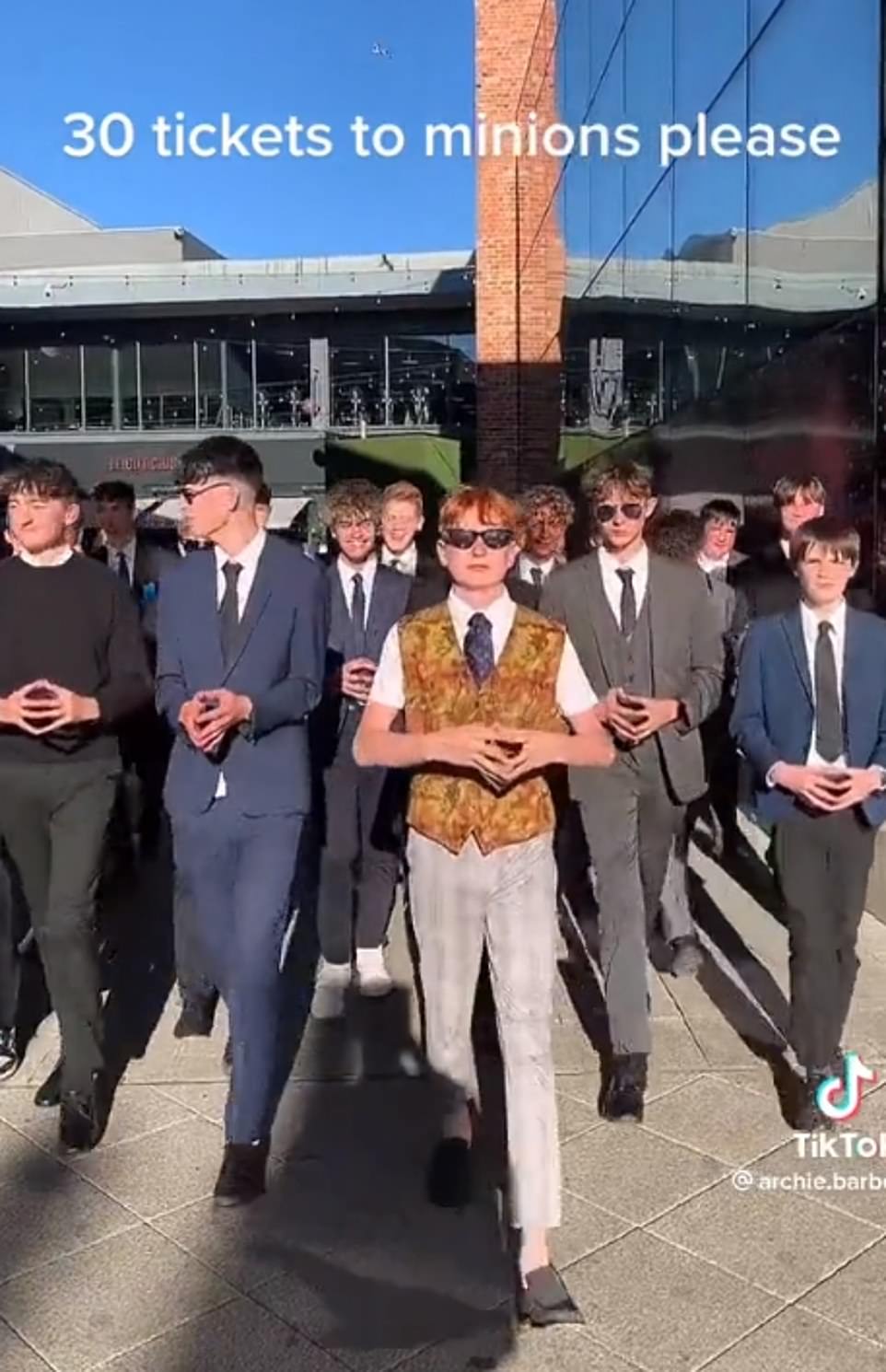 The noisy trend sees hordes of teenage boys dressing up in suits to watch Minions: The Rise Of Gru 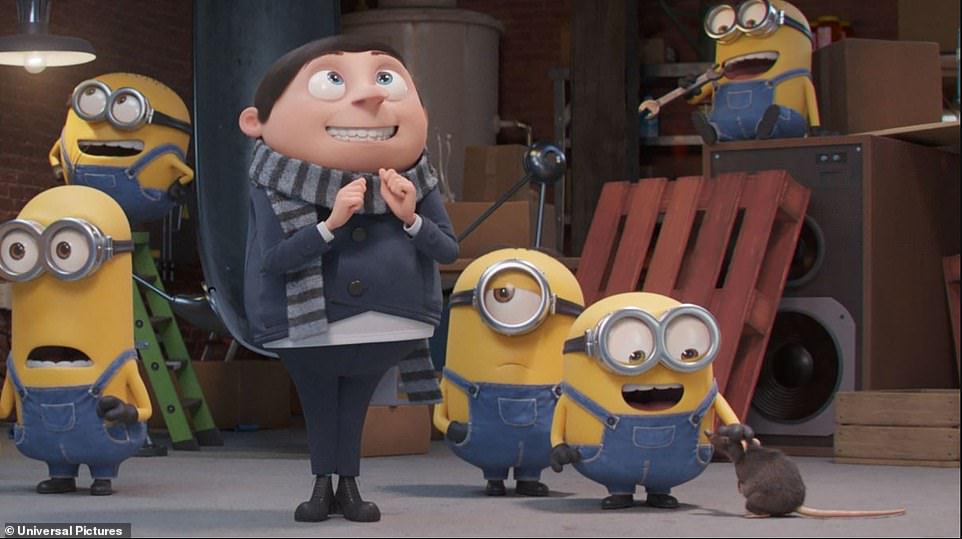 They said: ‘The trend cost me £1,300 yesterday. I had to refund all of the tickets in that theatre because of kids shouting and mimicking the Minions while the film was playing.

‘It was a group of about eight kids. Now, when we see any kids coming in to see the film dressed up we give them a warning. We tell them that if there is one complaint, whatever that may be, they will be kicked out of the cinema.

‘It’s something being implemented across a lot of cinemas, I have colleagues in Cheltenham who I know have had problems as well.’

Another cinema manager added: ‘The issue with the trend is children running around and treating the film as an opera, shouting and clapping.

‘We had one small disturbance but we asked the kids to be quiet and they were so, fortunately, it’s not been an issue for us.’

In the videos, which have racked up millions of views on the app, groups can be seen celebrating ‘the five-year wait is over’.

The sequel to the 2015 film Minions is already top of the box office in the US and Australia, making £106million in its opening weekend

Some even took bananas to snack on during the screenings, referencing the favourite food of Gru’s yellow helpers, called Minions.

Some of the viral videos show those taking part cheering and clapping loudly and being disruptive during screenings, leading to some UK cinemas to enforce dress code restrictions.

One sign, reportedly from an Odeon cinema, was posted online saying those dressed in suits would be refused entry to the movie.

It read: ‘Due to recent disturbances following the #Gentleminions trend, any group of guests in formal attire will be refused entry for showings of Minions: The Rise of Gru.’

One independent cinema in Wadebridge, Cornwall, has banned any unaccompanied children who are wearing suits from watching the film.

In a statement posted on Twitter, The Regal wrote: ‘We are currently not admitting unaccompanied children wearing suits for ‘Minions: The Rise Of Gru’. 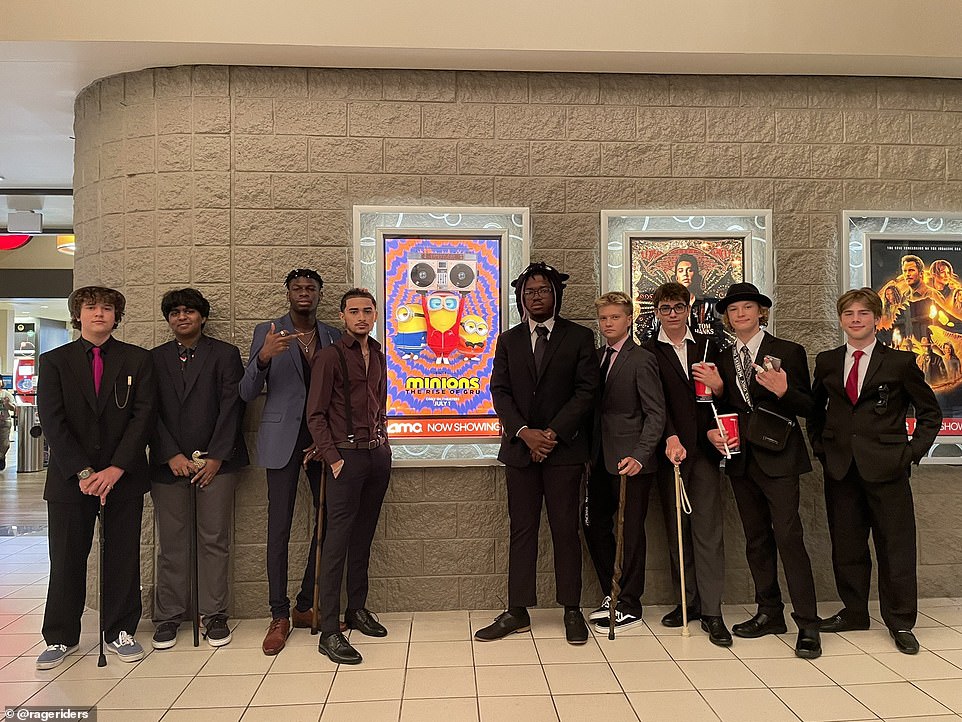 ‘This is due to the issues we have encountered over the last two days and it’s associated behaviour.’

Other customers took to social media to complain that the latest viral phenomenon had ruined their enjoyment of the film.

One mother said: ‘Took the girls to see the minions movie this evening. Walked out after an hour and got a refund.

‘Pretty much the whole rear half of the cinema was full of teenagers screaming, shouting, chanting and yelling throughout the entire thing. Wtf is wrong with people?’

Another person wrote: ‘People going into the Minions movie and making a huge mess and screaming and ruining the movie for other people – you’re not funny and it’s incredibly difficult to deal with when other customers demand refunds for your s**ty behavior.’

One customer added: ‘Absolute idiots ruined the movie for my two kids. They were upset by all the noise. Seems the youth of today are an inconsiderate bunch.’

Another customer added: ‘Absolute idiots ruined the movie for my two kids. They were upset by all the noise. Seems the youth of today are an inconsiderate bunch.’

The sequel to the 2015 film Minions was intended for release two years ago, but was delayed due to the pandemic.

It has already become a smash hit in the USA and Australia, topping the box office and making £106 million in its opening weekend.

An Odeon spokesman said: ‘Due to a small number of incidents in our cinemas over the weekend we have had to restrict access in some circumstances.’

** Have you had your trip to see the new Minions movie ruined? Please email: [email protected] **

Getty Kyrie Irving #11 of the Brooklyn Nets drives to the basket during the first half against the Miami Heat The...

Despite the blowback the National School Board Association faced after it coordinated with the White House to write its...

Despite the blowback the National School Board Association faced...
News

Tristan Thompson has reportedly made...
- Advertisement -