VIDEO: Rambling Biden’s Brain Turns to Mush During CNN Townhall…“Whether Or Not There’s A Man On The Moon”

Madelyn Cline net worth: How much is the Outer Banks star worth?

A Massachusetts couple have filed a federal lawsuit against eBay, accusing the e-commerce giant of subjecting them to a systemic campaign of cyberstalking and harassment in which former employees sent live spiders, a bloody pig mask and a funeral wreath to the victims’ home.

David and Ina Steiner, from Natick, say in their 93-page complaint filed in Boston federal court on Wednesday that the Silicon Valley company engaged in a conspiracy to ‘intimidate, threaten to kill, torture, terrorize, stalk and silence them’ in order to ‘stifle their reporting on eBay.’

The Steiners, who run EcommerceBytes, an online newsletter focused on the e-commerce industry, say they found themselves on the receiving end of death threats, bizarre deliveries, and in-person surveillance from eBay workers. 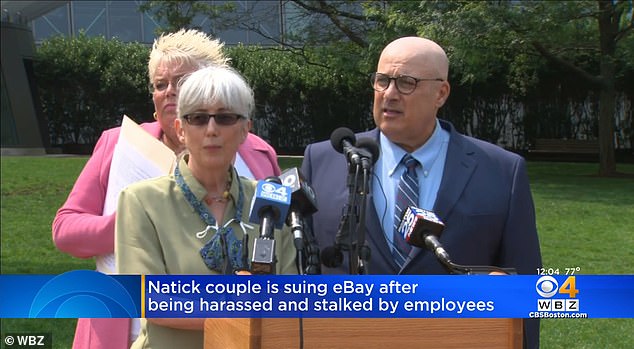 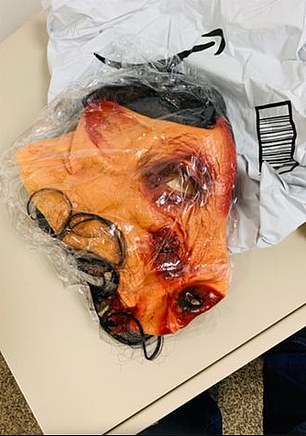 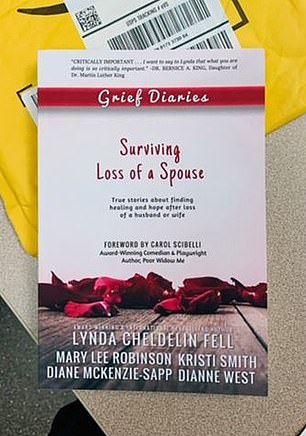 The lawsuit includes images of some of the chilling items that were allegedly sent by eBay staffers to the Steiners, including a bloody pig mask and a book on grief

The lawsuit alleges conspiracy, stalking, racketeering, intentional infliction of emotional distress, vandalism, trespassing and false imprisonment. The plaintiffs are seeking unspecified damages to be awarded by a jury.

It includes screenshots of chilling text messages exchanges between then-eBay employees discussing plans to target Ina Steiner, saying they needed to ‘burn her to the ground’ and ‘STOP her.’

‘This has been an unbelievably difficult ordeal for my wife and I,’ David Steiner said in a statement Wednesday. ‘Never did we imagine doing our jobs as journalists would lead to this.

‘We want to protect the rights of reporters and their freedom of the press. We have endured enormous cruelty and abuse and feared for our lives. If this behavior can happen to us, it can happen to anyone.’

Several former eBay employees were charged last June for their roles in the harassment campaign. At least five have already pleaded guilty to conspiracy to commit cyberstalking and conspiracy to tamper with witnesses but have not yet been sentenced.

The Steiners’ lawsuit names more than a dozen defendants, among them eBay and some of its employees, including former Chief Executive Officer Devin Wenig; onetime eBay security executives James Baugh and David Harville; Philip Cooke, a former California police captain and supervisor of security operations for eBay’s European and Asian offices; Stephanie Popp, former senior manager of global intelligence, and Veronica Zea, a contractor who worked as an intelligence analyst.

Wenig has not been criminally charged and has denied knowing about the plot against the Steiners. He departed eBay with a $57million severance package.

Rosemary Scapicchio, the Steiners’ attorney, alleged during a press conference announcing the lawsuit that the ‘systematic campaign to emotionally and psychologically torture’ her clients was coordinated by eBay’s top executives.

Federal prosecutors have said the harassment included anonymous deliveries of items like live spiders and cockroaches, a funeral wreath in Ina Steiner’s name, a book on dealing with grief after losing a spouse, and a bloody pig face Halloween mask to the couple’s home. 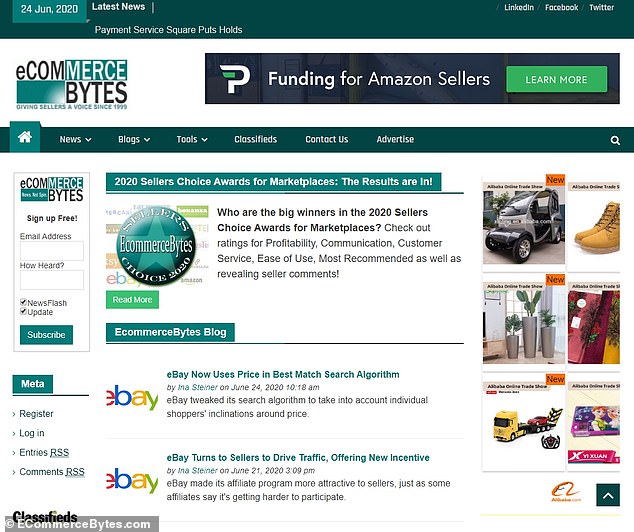 eBay allegedly went to war against the Steiners’ online e-commerce magazine, EcommerceBytes, over its negative coverage of the company 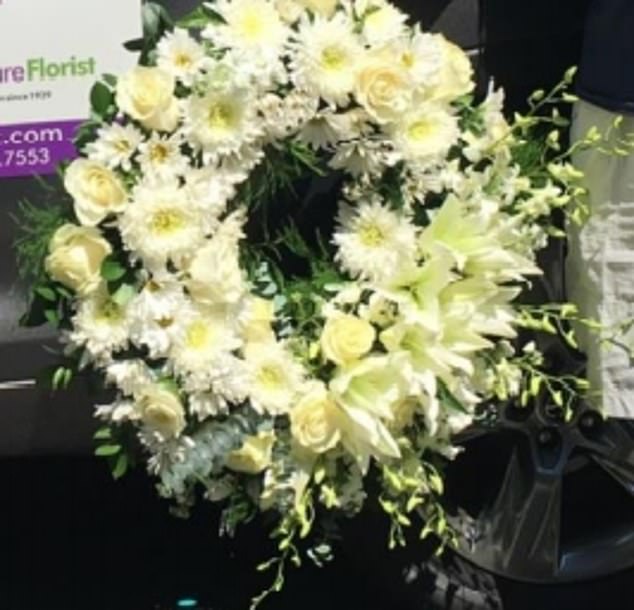 In an alleged effort to scare Ina, eBay staffers sent a funeral wreath in her name (pictured)

The employees also sent pornographic magazines with David Steiner’s name on it to their neighbor’s house and planned to break into the couple’s garage to install a GPS device on their car.

‘This was a determined, systematic effort by senior employees of a major company to destroy the lives of a couple in Natick all because they published content that company executives didn’t like,’ then-U.S. Attorney for Massachusetts Andrew Lelling said at the time.

Speaking to reporter on Wednesday, Ina Steiner said what happened to her family was ‘terrifying,’ and now she wants everybody who was involved in the intimidation campaign to be held accountable.

eBay did not respond to requests for comment. The company issued an apology last year to the Steiners. 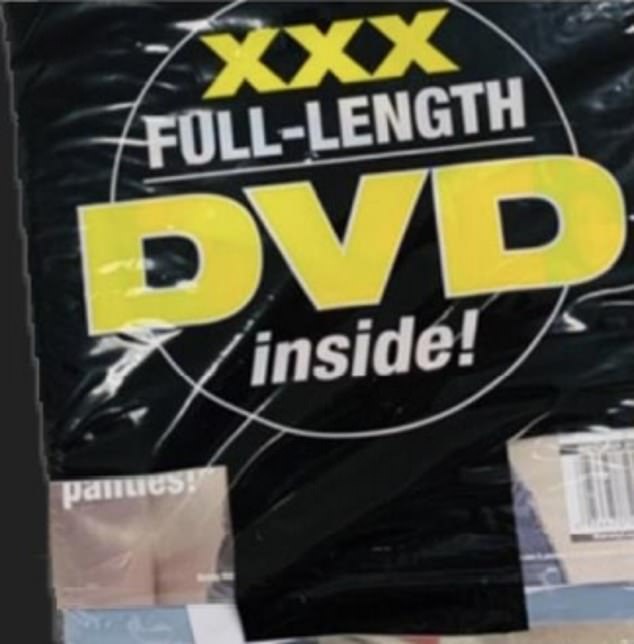 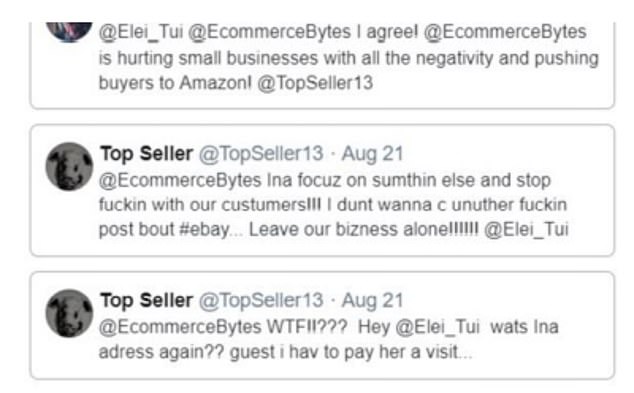 One part included sending disturbing items to the couple’s home, including a preserved fetal pig, which was never delivered, and a book titled Grief Diaries: Surviving Loss of a Spouse.

The strange packages continued to arrive over a period of several weeks, with the content of each growing increasingly bizarre. Fly larvae, spiders and roaches. were all delivered. 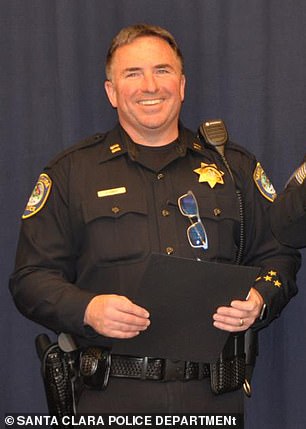 Philip Cooke, 55, a former California police captain and supervisor of security operations for eBay, pleaded guilty last year to conspiracy to commit cyberstalking and conspiracy to tamper with witnesses

After the bloody pig mask arrived by mail, Ina Steiner received a message on Twitter saying: ‘DO I HAVE UR ATTENTION NOW????,’ court documents show.

The eBay employees also allegedly took out an ad on Craigslist inviting ‘singles, couples and swingers’ to come over to the newsletter publisher’s home to party each night.

The second phase included sending private Twitter messages and public tweets criticizing the newsletter’s content, the posting of their home address, and threats to visit the victims, authorities said.

They also planned to break into the couple’s garage to install a GPS device on their car, and advertised things like yard sales at their address and encouraged strangers to knock on the door if the pair wasn’t outside, officials said.

The third phase of the twisted plot involved surveillance, and secretly surveilling the victims in their home. The victims spotted the unusual behavior reported it to local police, who started the investigation, prosecutors said.

The defendants then allegedly tried to thwart that investigation, including deleting digital evidence, prosecutors said.

Court documents allege that Baugh, Gilbert, Popp and another eBay security employee planned the messages to become increasingly disturbing, culminating with ‘doxxing’ the victims by publishing their home address online.

The Steiners’ lawsuit quotes a text message exchange between some of the suspects, discussing ways to intimidate Ina.

An internal investigation was launched after eBay was notified by law enforcement in August 2019 of ‘suspicious actions by its security personnel,’ company officials wrote in a prepared statement.

Share
Facebook
Twitter
Pinterest
VK
WhatsApp
Previous articleKanye West’s ‘Donda’ Album Gets a Release Date: Everything We Know
Next articleFirst ever wild albino chimpanzee is spotted in Uganda – shortly before it was killed by its pack