Six decades ago, we didn’t exist. But we spads have become increasingly influential in Whitehall, playing a strange role for Ministers, somewhere between friend, gatekeeper, adviser and general dogsbody armed with a Snickers bar (in case of a meltdown needing a sugar hit).

As Housing Secretary James Brokenshire’s media spad, I had to advise him on the regular rounds of interviews – which could cover anything from NHS care beds to Love Island evictions – as well as reminding him to have a pee beforehand. And, of course, to be tuned into all the Westminster gossip.

A colleague who got invited to the Brit Awards contacted me the morning after about the antics of the Work and Pensions Secretary: ‘The image that will be burned into the pinholes of my eyes – perhaps for ever – is that of Therese Coffey attempting to twerk to Stormzy.’ As a result, poor Therese has been nicknamed the ‘Twerk and Pensions Secretary’.

At one reception at No 10, a Tory MP brought the eccentric actress Su Pollard as his plus-one. The then PM, Theresa May, endured Pollard shouting, ‘Hi-de-hi, Theresa!’ at her. I’m sure, in that moment, Mrs May felt the decades at the grindstone of political life were all worth it. 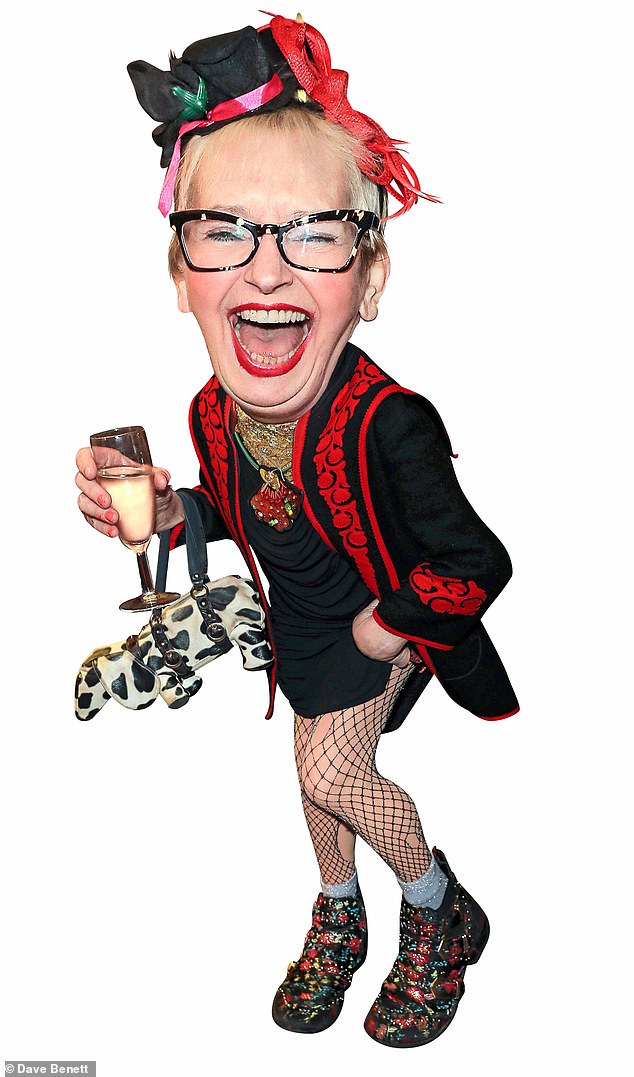 At one reception at No 10, a Tory MP brought the eccentric actress Su Pollard as his plus-one. The then PM, Theresa May, endured Pollard shouting, ‘Hi-de-hi, Theresa!’ at her. I’m sure, in that moment, Mrs May felt the decades at the grindstone of political life were all worth it

The snarking of the Hunt

I asked Labour’s Tristram Hunt what he saw as his role as a constituency MP. He said: ‘It is to try to convince people that Stoke isn’t a s***hole.’ At least he was honest.

At the heart of No 10 is ‘Switch’ –- the switchboard – renowned for its calm, assured operators who connect Prime Ministers to anyone in the world. Switch has the number of almost anyone the PM could possibly want to contact. Very occasionally, though, it makes mistakes. Once, a No 10 official asked to be put through to the then Housing Minister Gavin Barwell, but the operator misheard. Take That frontman Gary Barlow was slightly baffled to receive a call about housing policy.

A smarter class of reader

James Brokenshire’s wife Cathy rang me about an interview James was about to do with the Daily Mail. Was it OK to wear jeans for the photo? No, I said quickly, it is better to go slightly smarter as the Mail’s readership would expect something a little dressier.

One Friday morning, I was working at home in my jogging bottoms, happily tapping away at my laptop and two phones. Incidentally, two groups of people always work on two phones: spads and drug-dealers.

I was called by a journalist on The Times and asked about a rumour that housing giant Persimmon was about to post profits of £1 billion. After some digging, I texted a comment saying the company had not always acted entirely properly in regard to the Government’s Help To Buy scheme for first-time buyers.

This led to a story saying ‘Britain’s most profitable housebuilder faces being stripped of its right to sell Help To Buy homes after allegations of poor standards.’

On Monday morning, when the financial markets opened – and largely the result of my text – Persimmon’s worth fell by £387 million in just one day.

Ironing out the wrinkles

One Minister who sat around the Cabinet table told her diary secretary to block out an afternoon once a month so she could go to her doctor in Harley Street for Botox. ‘The problem,’ the spad told me, ‘is when she grins heavily, you can see the filler accumulate above her temples.’

Rebel without a pause

Some Downing Street spads had a sweepstake on how long Greg Clark, then Business Secretary, would speak continuously in Cabinet meetings. His record? Twenty-six minutes without a pause. In a 90-minute meeting.

Boris owes me a big debt

My first encounter with Boris Johnson was when I was on work experience at The Spectator and he was editor. He sent me to buy him a coffee, saying: ‘And get one for yourself, too.’ 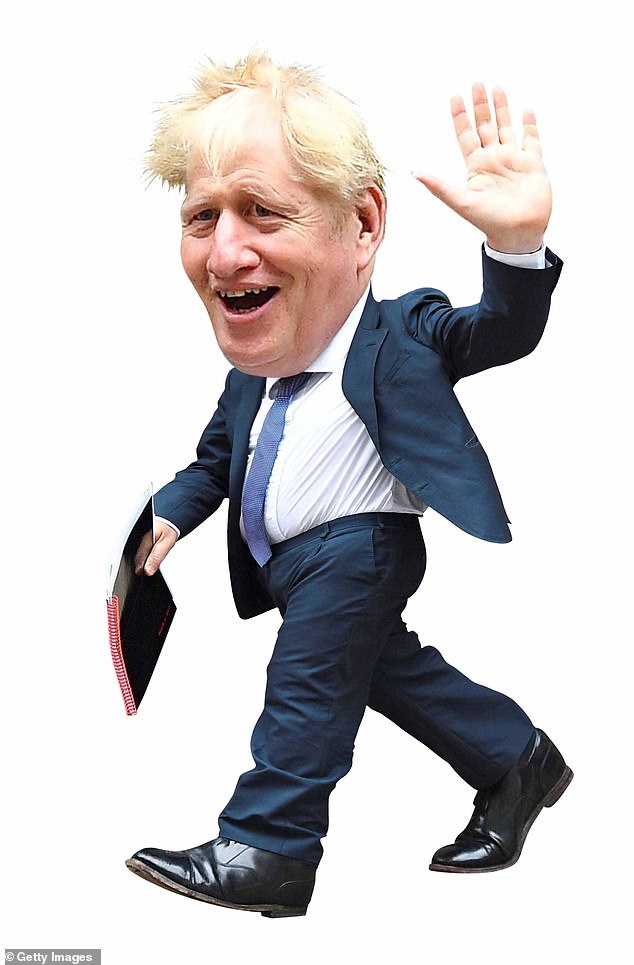 My first encounter with Boris Johnson was when I was on work experience at The Spectator and he was editor. He sent me to buy him a coffee, saying: ‘And get one for yourself, too’. The coins he gave me didn’t even cover the full cost of his latte. Boris still owes me £2.35, 15 years on

While in the Northern Ireland Office, I worked with Junior Minister Kris Hopkins on advancing the cause of same-sex civil marriage there, against resistance from the Democratic Unionist Party. During one meeting, the blunt Yorkshireman said: ‘It’s probably about bloody time I got on my big rainbow underpants and told the DUP what’s what on equal marriage.’ When Kris left the department, I bought him such a pair on eBay for £2.99. I don’t know if he ever wore them.

It is traditional for Treasury Ministers to leave a light-hearted Post-It note for their successors.

Liam Byrne’s message after the 2008 banking crash and subsequent recession infamously read: ‘Dear Chief Secretary, I am afraid there is no money. Kind regards and good luck.’

Previously, civil servants had spotted a series of other notes that Byrne (nicknamed ‘Baldemort’ in tribute to the Harry Potter villain) had left around his desk to motivate himself.

They included ‘Get Army fit’, ‘Have my own library (like Reagan)’ and ‘Buy ski chalet in France’.

Red Ed’s jibes are no joke

I was reliably informed two jokes were cut out of Ed Miliband’s first conference speech as Labour leader about the then Tory Communities Secretary Eric Pickles being overweight. The first – ‘the party never worries about losing Eric Pickles, because wherever he goes he always leaves a trail of crumbs’ – you could probably just about get away with. But ‘Eric Pickles – the only Cabinet Minister visible from space’ would have been a jibe too far.

Protection officers get to know Ministers well, but personal relationships such as the one in the BBC1 drama Bodyguard are strictly prohibited. Saying that, one spad sent a cheeky Valentine’s Day card to a protection officer who had worked with their principal, including the line: ‘No need to fire your Taser to make me go weak at the knees.’

A whiff of offence

During the Election campaign of 2017, one volunteer worker had a particularly strong reaction around Theresa May’s chief of staff Fiona Hill – her perfume brought her out in hives, so she had to retreat every time Fiona came near. The volunteer never felt that she could explain to Fiona the reason she kept stepping away.

The eight-day media maelstrom that we called ‘Ovengate’ began when a small Sunday Times news item remarked that James and Cathy own two double ovens. By Tuesday, memes were flying thick and fast on Twitter, and James decided to lean into the ludicrous, and increasingly funny, reaction. He tweeted a picture of himself with a Victoria sponge cake with the line: ‘Amazing what you can rustle up! Maybe some more hot potatoes next! #TwoOvens.’

The key thing, in victory and defeat, is to be graceful and magnanimous with your opponents. Labour’s Emily Thornberry was neither. Despite the exit poll in 2017 which suggested the Tory Government was going to be re-elected, she strutted on to the set at Sky News, churlishly sneering at us. Cathy Brokenshire can’t stand Thornberry and, believe me, when you’ve lost Cathy you’re doing really badly.

Whenever Theresa May was on a factory visit, it was our job to check there was a supply of the correct tea bags (Earl Grey, since you ask). 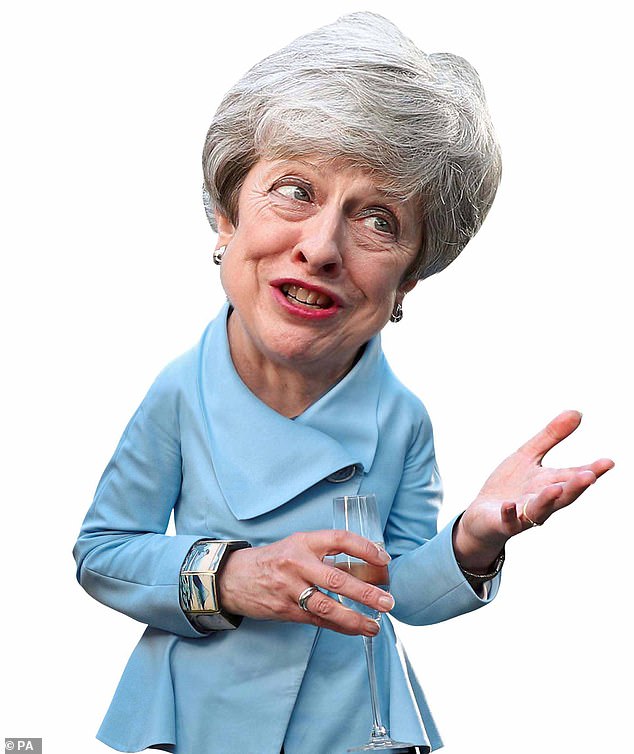 Whenever Theresa May was on a factory visit, it was our job to check there was a supply of the correct tea bags (Earl Grey, since you ask)

At one Liberal Democrat party conference, I remember the drunken lover of a senior Lib Dem MP pitching up wearing just a vest and shorts, looking like some sort of relic from a Culture Club gig. I also remember a female friend, who would have been about 25 at the time, telling me about the difficult experience of extracting herself from a conversation with a famous broadcaster at least 40 years her senior whose intentions were not to discuss the contents of Nick Clegg’s speech.

Back to school, Minister

Suspecting that while being interviewed by sixth-formers, newly appointed Northern Ireland Secretary Karen Bradley might be tested on some rudimentary general knowledge, I told her the FAT LAD acronym I’d learned in primary school to remember the six counties of Northern Ireland – Fermanagh, Armagh, Tyrone, Londonderry, Antrim, Down.

As you leak it 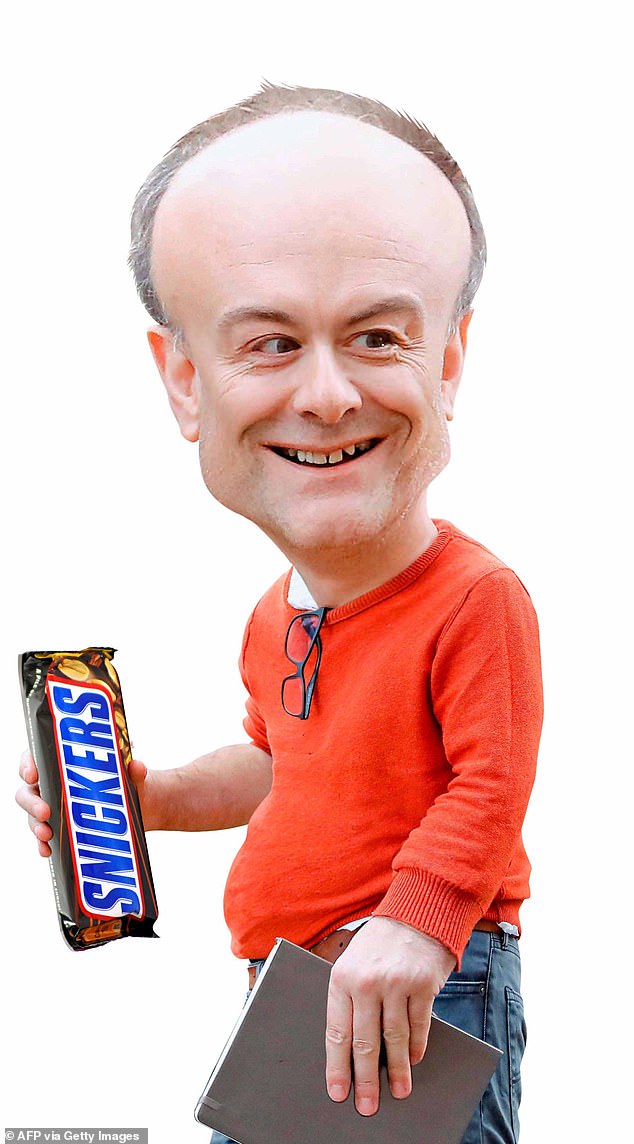 At a mandatory 7.55am gathering of all spads in Downing Street – one of the first of the Johnson administration – Dominic Cummings told us in no uncertain terms: ‘If you leak, you will be marched from your desk by the head of security at your department, your pass will be taken off you and you will be sacked. You have no rights.’ Of course, these sentiments were immediately leaked and appeared in The Times the very next day…

At a mandatory 7.55am gathering of all spads in Downing Street – one of the first of the Johnson administration – Dominic Cummings told us in no uncertain terms: ‘If you leak, you will be marched from your desk by the head of security at your department, your pass will be taken off you and you will be sacked. You have no rights.’

Of course, these sentiments were immediately leaked and appeared in The Times the very next day… 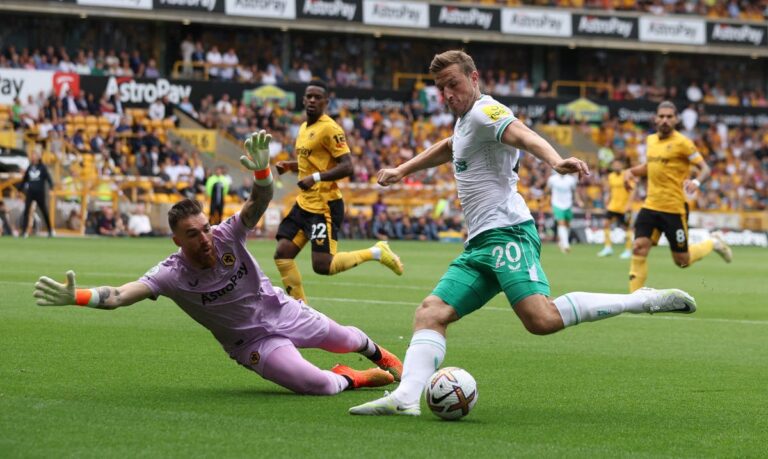 Champions League Draw Who Have The English Teams Got Original Video M218748 Follow live coverage as Wolverhampton Wanderers face Newcastle United in the Premier League today. It hasn’t been a good start to the campaign for the hosts in terms of points accrued, but Bruno Lage might be pleased by some of their displays despite… 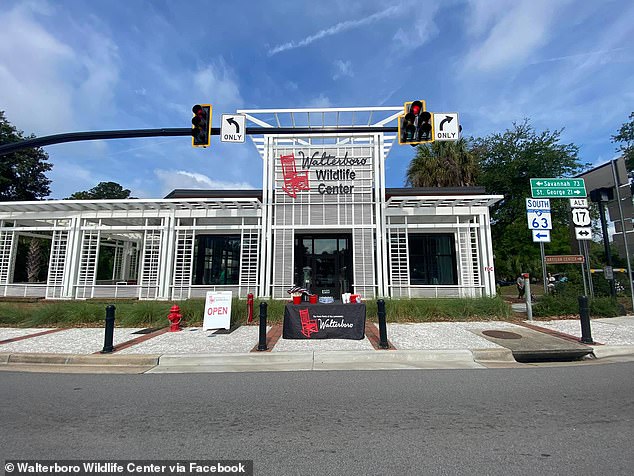 Several couples’ weddings are reportedly being upended by Alex Murdaugh’s ongoing murder trial, which is currently being held across the street from a small-town South Carolina venue housing the processions. Compounding the issue is the fact that the multipurpose Waterboro event hall – set 45 miles from Charleston – is being used as a makeshift media center,…

Chicago police/Twitter Ella French Ella French was identified as the 29-year-old Chicago police officer who was shot and killed in a traffic stop on August 7, 2021. She was remembered as a dedicated public servant and “humanitarian” who possessed “attributes that you don’t find in this world anymore.” Those descriptors came from her brother to… 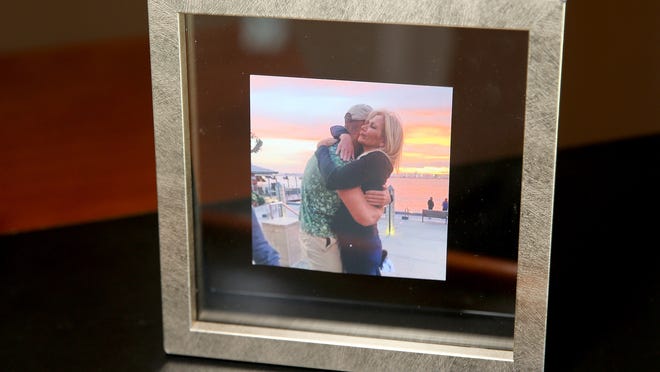 In the months after Manalapan’s Kyle Mullen died while trying to become a Navy SEAL because he did not receive the proper medical attention, his mother Regina Mullen has sought to reform the process. Her quest took a step forward Thursday. The U.S. House of Representatives voted 362 to 64 to include an amendment, titled… 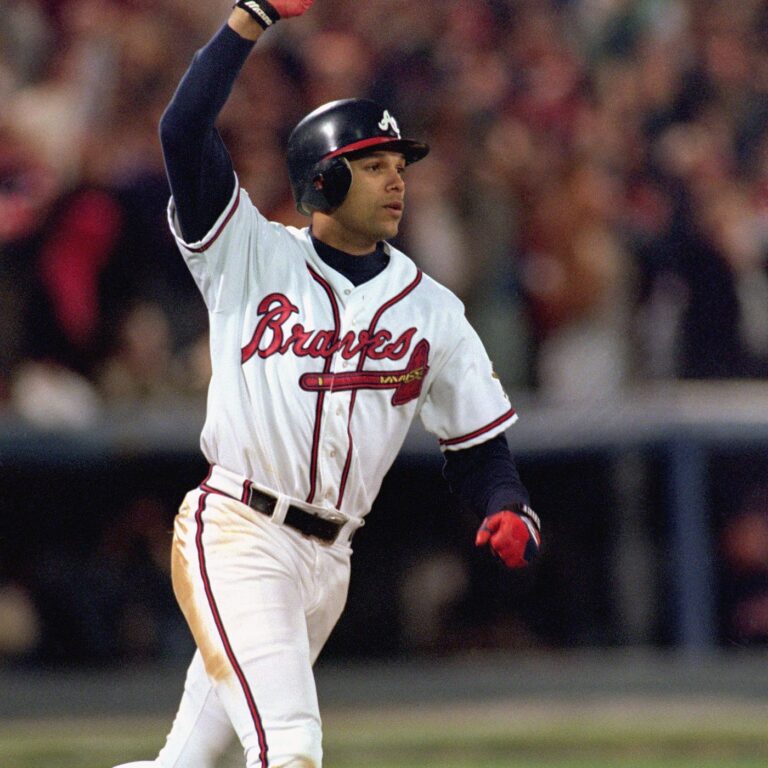 David Justice is a former baseball participant and broadcaster in the US. David Justice was a former outfielder. In 1993, 1994, and 1997, he was named to the MLB All-Star crew 3 times. He additionally appeared on The Younger and the Stressed for a single episode. Desk of Biography/Wikipedia What’s the Salary of David Justice?…

Jamie Carragher believes Mohamed Salah will break Steven Gerrard’s goalscoring record for Liverpool in Europe ‘in the next couple of games’ following the Egyptian’s double against Porto on Tuesday night. The 29-year-old netted twice along with Roberto Firmino while Sadio Mane was also on target as Jurgen Klopp‘s men maintained their 100 per cent start…