She’s been celebrating her Grammy win for Pop Vocal Album and picking up three nominations for the upcoming BRIT Awards.

And Dua Lipa was in a more reflective mood on Saturday as she shared a sizzling selection of bikini throwback snaps to Instagram.

The singer, 25, looked sensational as she flaunted her incredible figure while relaxing at the beach and sunbathing topless. 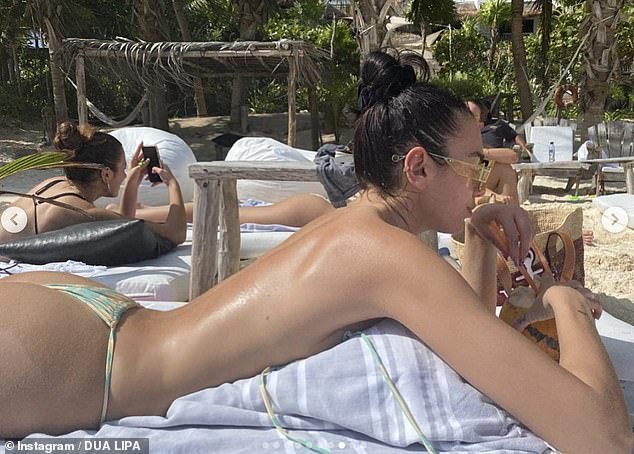 Sizzling: Dua Lipa looked sensational as she flaunted her incredible figure while sunbathing topless at the beach in a series of throwback bikini snaps shared to Instagram on Saturday

Dua looked every inch the beach babe as she lounged on her front during one sunbathing session, untying her pastel bikini top to work on her tan.

The beauty highlighted her pert posterior in a pair of string thong bottoms and donned a pair of trendy plastic sunglasses to complete her look.

Another snap saw the Levitating hitmaker rock a neon green bikini which scooped around her ample cleavage.

She put on an animated display for the fun picture while sitting with pal Ella Jenkin and her younger siblings Rina and Gjin. 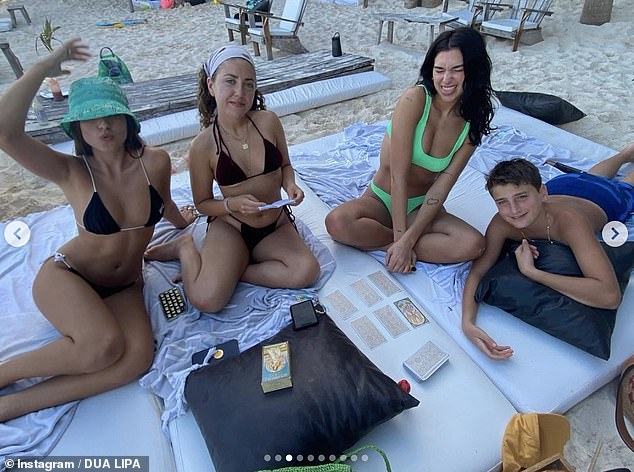 Relaxing: The singer, 25, also slipped into a neon green two-piece while spending time with her brother Gjin and sister Rina (left) as well as pal Ella Jenkin (second left) in another picture from a past trip

Pining for a holiday? Dua admitted that she missed ‘waking up for the sunrise’ in the caption

Dua also pined for the ocean, posting a sunsoaked image of her larking around in the waves alongside her bikini-clad pals.

The women looked incredible as they posed up a storm in their slinky swimwear, with Dua opting for a brightly coloured bandeau number.

She captioned her stunning throwback snaps: ‘I miss waking up 4 the sunrise.’

Although reminiscing about her beach trip, Dua did not say where the images were taken, however she did holiday in Mexico with beau Anwar Hadid back in January. 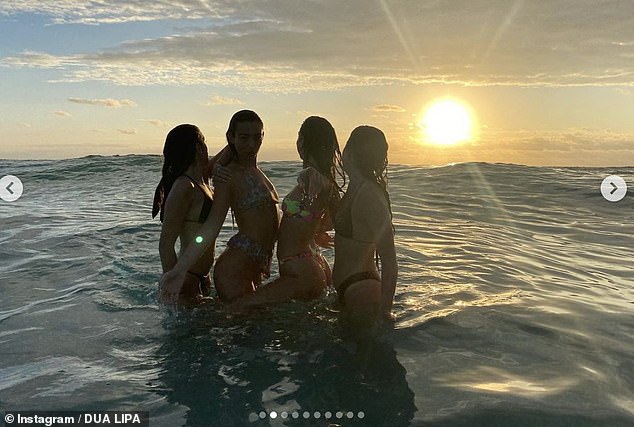 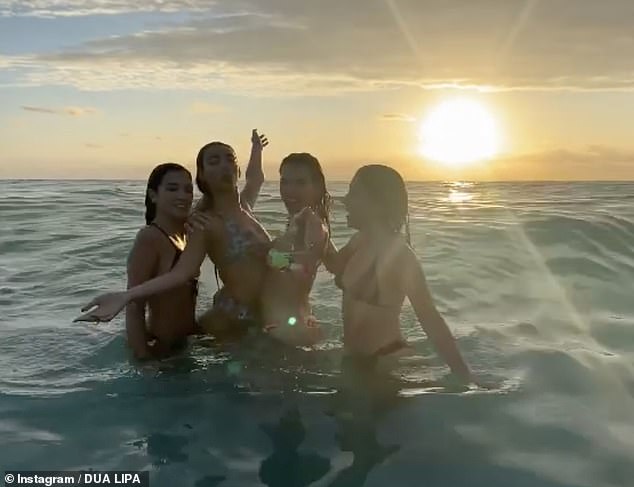 Loving it: She threw her arm towards the camera while rocking a colourful bandeau bikini 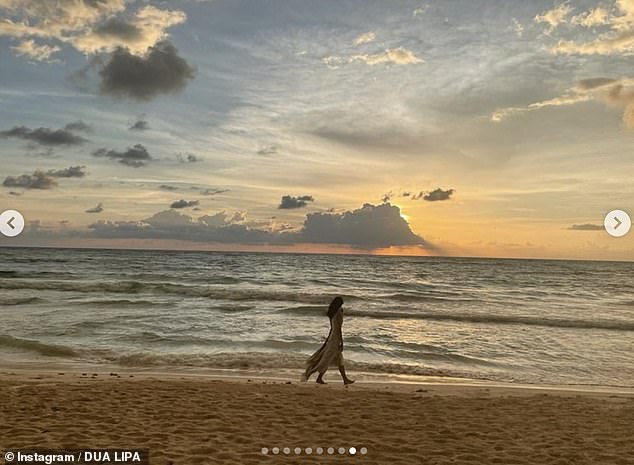 Beach strolls: Another picture showed the Don’t Stop Now hitmaker donning a long dress and strolling along an empty beach

It comes after Dua exuded confidence as she posed up a storm in a tiny black sports bra and hot pants for Madame Tussauds in New York.

The singer shared the behind-the-scenes shots in an Instagram post on Friday, revealing that she was set to become a waxwork at the museum for the third time.

In one shot, Dua was surrounded by a large contraption made up of many cameras posed at different angles to create a 3D image of her body. 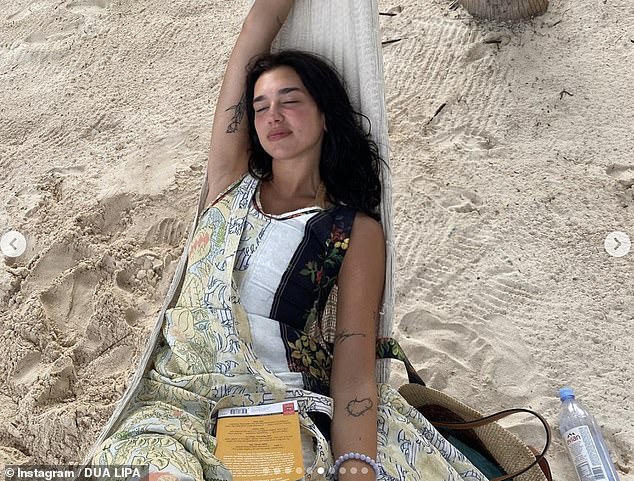 Just hanging out: Dua went makeup-free as she kicked back and relaxed in a hammock with her book for another throwback image 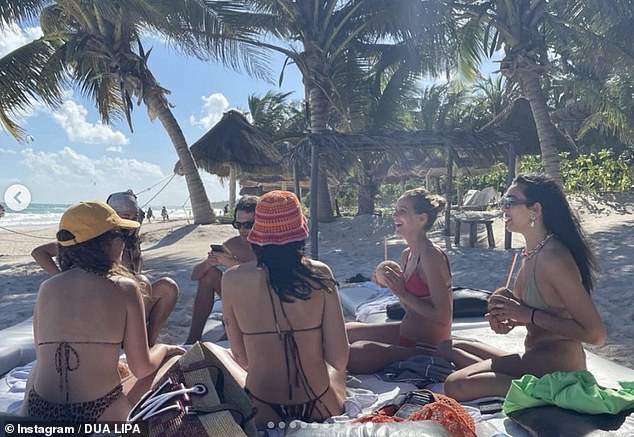 Good times: Another more candid shot showed Dua’s pals all laughing together at the beach

Last month, the singer was revealed to have been nominated for three categories at the BRIT awards; Female Solo Artist, Mastercard Album, and British Single.

Dua will also take to the stage at the highly-anticipated music event which will be broadcast on May 11 from The O2 arena.

The pop star has had lots to celebrate in recent months after her hit album Future Nostalgia won best Pop Vocal Album at the Grammys.

Dua’s album Future Nostalgia was released in March 2020 after being brought forward by one week following leaks online.

Since its release, the hit record has been nominated for six Grammys – winning one – and produced songs including Levitating, Physical and Don’t Start Now.

Speaking about releasing an album amid the pandemic with Music Week, Dua admitted: ‘I was definitely scared, because there’s always that uncertainty. 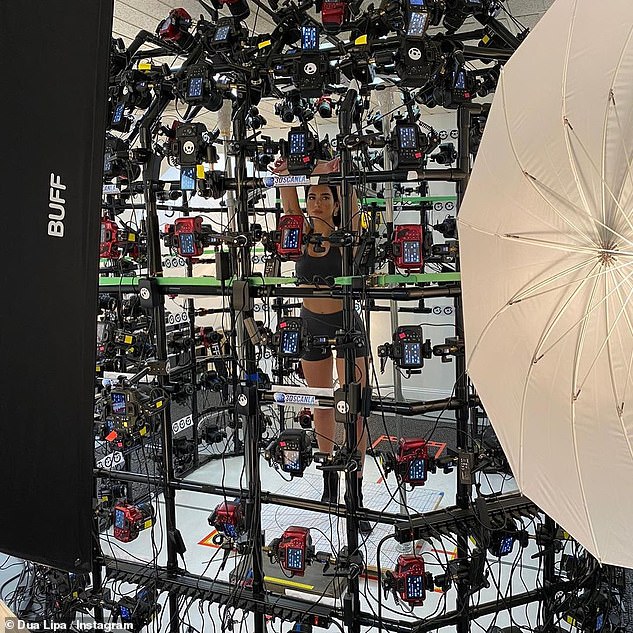 Model pose: It comes after the singer shared the behind-the-scenes shots in an Instagram post on Friday, revealing that she was set to become a waxwork at the museum for the third time

‘I put it out just as lockdown was happening in the UK and there was so much uncertainty and suffering, it was a very confusing time.

‘The thing that made me want to put it out at this time is that I made this record as a form of escapism, to get away from any pressures or words from other people.’

The pop singer was recently reported to be worth more than £20million through her two companies.

Filings shared online at Companies House have revealed her company Dua Lipa Limited has assets of £18,576,940 for the year end December 2019 — an impressive rise from £11,816,318 the previous year.

The higher total also included investments of £8,340,904, while accounts for Dua Lipa Live LLP, had a whopping almost £2million more on the books, reports The Sun.

MailOnline has contacted Dua Lipa’s representatives for a comment. 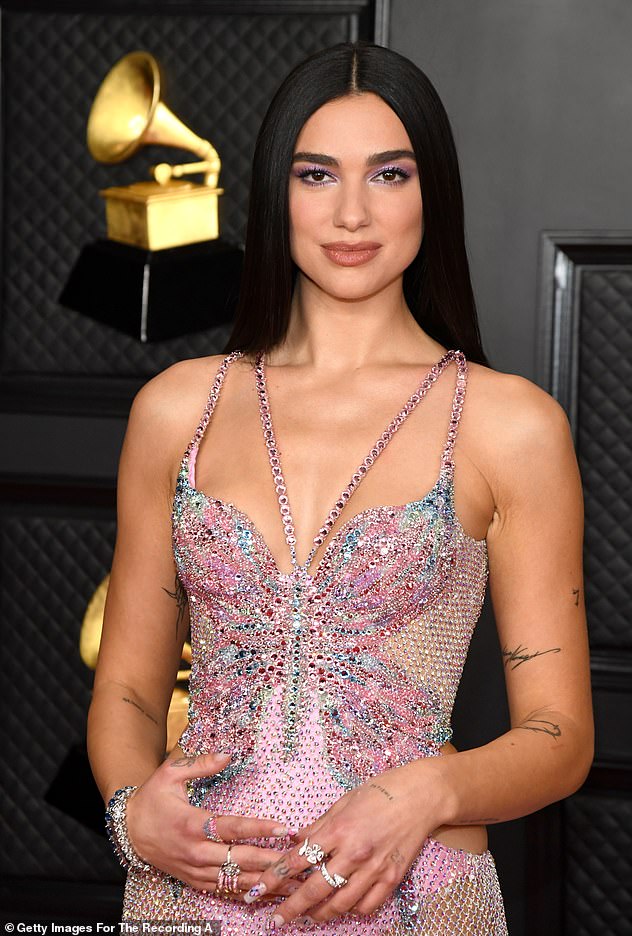 Raking it in: Dua is reportedly worth more than £20million through her two companies (pictured at the Grammy Awards in March 2021) 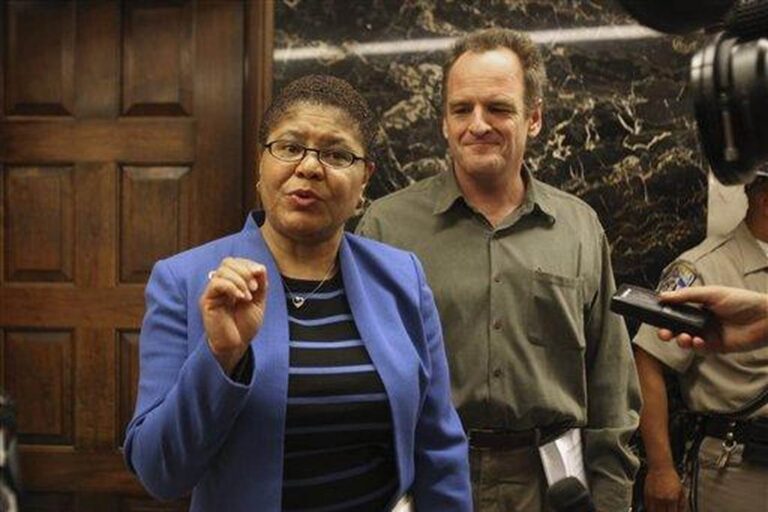 The curious case of Congresswoman and current Los Angeles mayoral candidate Karen Bass, who stated on Saturday, September 10th that a burglary took place at her home the previous day, with the only items taken being two guns, grew stranger on Wednesday, when Bass stated the Los Angeles Police Department had informed her they had…

QuadrigaCX, a cryptocurrency exchange platform, made national headlines in January 2019 when it was announced that Gerald Cotten, the CEO, had died. Since he was the only person with access to the funds, thousands of customers lost their money, totaling more than two hundred million. Netflix’s ‘Trust No One: The Hunt for the Crypto King’… 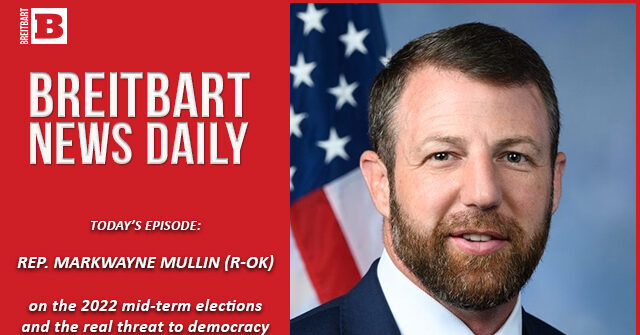 Breitbart’s Jerome Hudson, filling in for host Alex Marlow, opens today’s podcast with the latest twist in the Department of Justice’s Mar-a-Lago raid. The FBI released a photo showing documents it seized from former President Trump’s home scattered across the floor, which has led some to accuse the Bureau of staging a public relations stunt…. 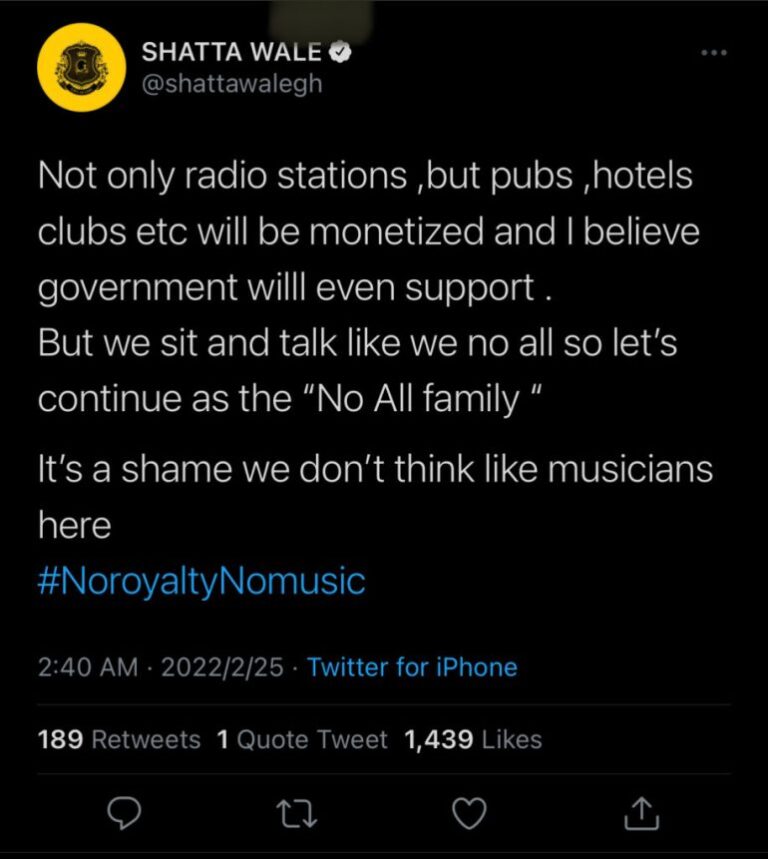 Controversial Ghanaian dancehall musician, Charles Nii Armah Mensah Jnr., nicely often called Shatta Wale has instructed a doable demonstration of Ghanaian musicians towards the Ghana Music Rights Group(GHAMRO). ADVERTISEMENT READ ALSO: “Sarkodie Is My Inspiration But I Don’t Copy His Lyrics”-Amerado Reveals (Video) Based on Shatta Wale, the demonstration will goal at getting the group… 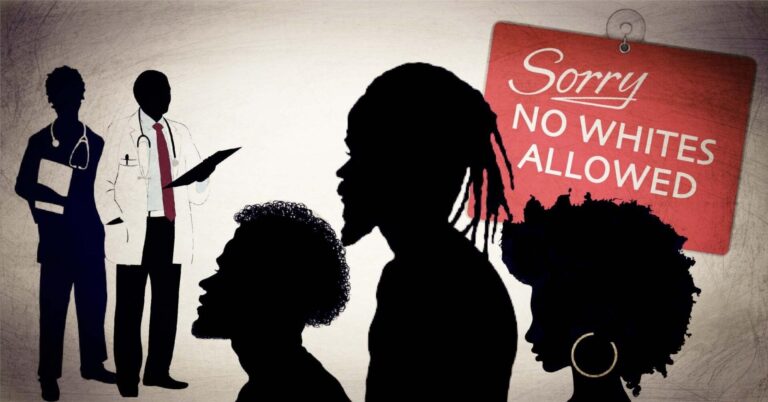 Support Revolver By Going AD-FREE–Donate HERE to fund investigative journalism CHECK OUT THE NEWS FEED—FOLLOW US ON GAB—FOLLOW US ON GETTR America had a hearty snort blended with delicate horror this week when it realized that the Biden Administration is planning to distribute free crack pipes to drug addicts for the sake of “racial fairness.” The $30… 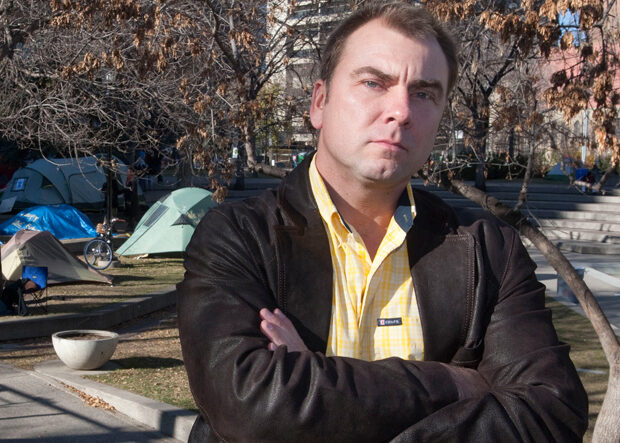 Pastor Artur Pawlowski, who has butted heads with Canadian tyrants looking for to criminalize the observe of spiritual freedom all through the pandemic, was arrested once more simply earlier than he deliberate to talk to a bunch of Canadian truckers against the nation’s draconian Covid-19 mandates. The pastor, who reportedly is of the Cave of…