The DUP today left the Northern Ireland Assembly unable to function as the unionist party blocked the election of a Speaker in the Stormont legislature.

The move came as part of the DUP’s continuing protest against post-Brexit trade rules for Northern Ireland.

The party had already vowed not to re-enter a powersharing executive at Stormont until the UK Government takes ‘decisive action’ over the Northern Ireland Protocol.

And they today declined to support the process of electing a new Speaker, leading to the collapse of the Assembly even before it was up and running following last week’s Northern Ireland elections.

Those elections saw the DUP replaced by nationalist Sinn Fein as the largest party in the Assembly in an historic result.

The DUP’s decision to block the election of a Speaker will pile further pressure on the UK Government to seek to solve the dispute over the Protocol with the EU.

Sir Jeffrey Donaldson, the DUP leader, said his party was today sending a ‘very clear message’ to both Brussels and London.

Both Prime Minister Boris Johnson and Foreign Secretary Liz Truss this week reiterated to Brussels that they are ready to take unilateral action to override the Brexit agreement.

There are now expectations the PM will announce new laws to set aside elements of the Protocol within days, with claims this could happen as soon as Tuesday.

The DUP came in for further criticism from other Stormont parties today.

Sinn Fein’s vice president Michelle O’Neill, who is poised to become Northern Ireland First Minister following the election results, branded the DUP’s move to block the election of a Speaker as ‘disgraceful’.

Naomi Long, the leader of the cross-community Alliance Party, said it was ‘incredibly frustrating’.

Ireland’s Taoiseach Micheal Martin said the DUP’s action was ‘unsatisfactory’ as he called for ‘pragmatism and commonsense’ over the Protocol row. 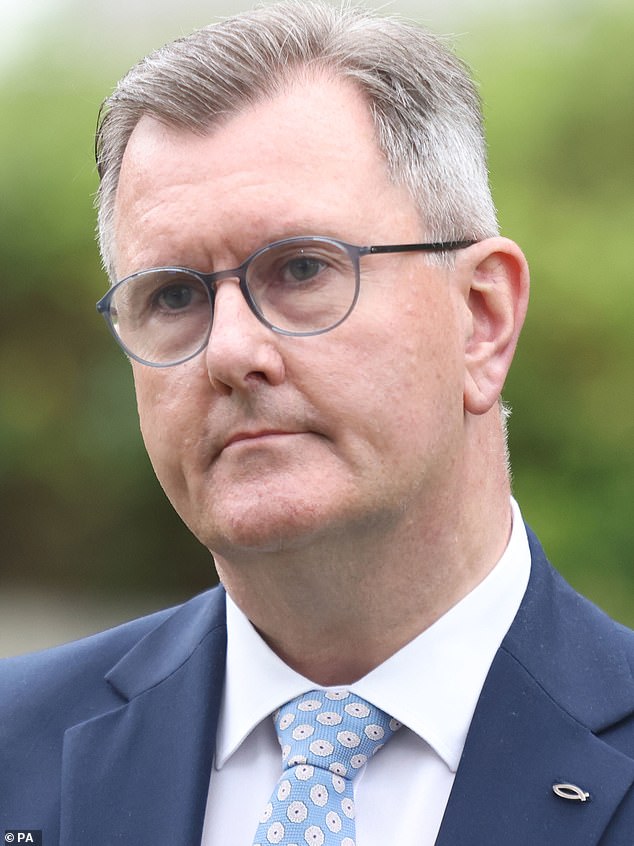 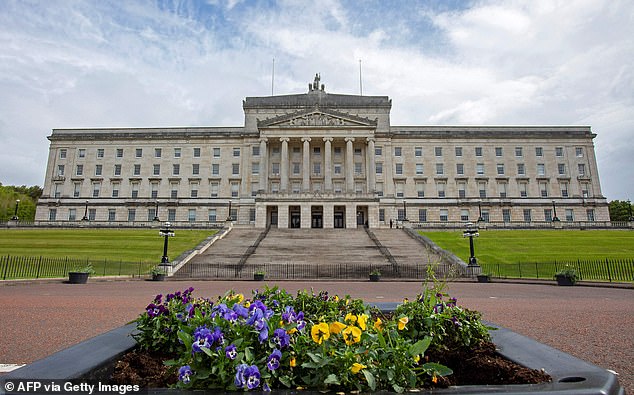 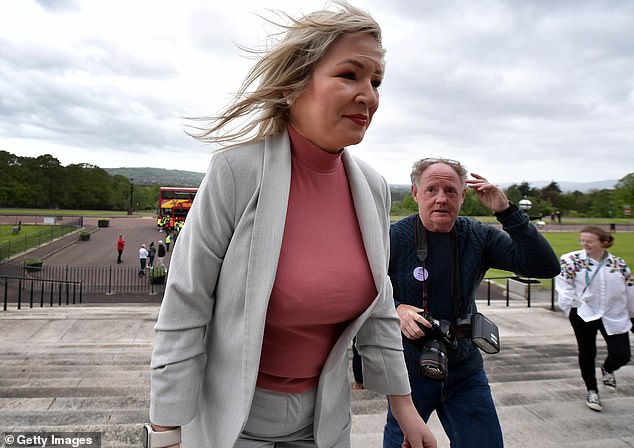 Sinn Fein’s vice president Michelle O’Neill, who is poised to become Northern Ireland First Minister following the election results, branded the DUP’s move to block the election of a Speaker as ‘disgraceful’

The Protocol was designed to prevent a hard border on the island of Ireland after Brexit and imposed checks on goods moving from Great Britain to Northern Ireland.

But the EU’s ‘dogmatic’ and ‘rigid’ implementation of the Protocol has been blamed by British ministers for causing significant trade disruption.

The DUP and other unionists are also concerned the agreement has been detrimental to Northern Ireland’s status within the UK, by putting a trade border across the Irish Sea.

Prior to the newly-elected 90 MLAs entering the Northern Ireland Assembly today for the first time since last week’s elections, Sir Jeffrey said he was sending a ‘clear message’ to both Brussels and London.

In a statement this morning, he confirmed the DUP’s latest action as the party seeks to ramp up pressure over the Protocol.

‘Today the DUP will not support the election of a speaker in the Assembly,’ Sir Jeffrey said.

‘Some parties who just a few months ago were mocking the promise of decisive action from the DUP in relation to the Protocol are the very same parties now feigning surprise and outrage at a political party keeping its promise to the electorate.

‘Devolution was restored on the basis of the New Decade, New Approach agreement.

‘We have seen delivery of, or significant progress towards nearly every aspect of that document except one.

‘That is the UK Government’s promise to legislate to respect and protect Northern Ireland’s place within the UK internal market.

‘Twenty-eight months since that promise was made and 16 months since it should have have been delivered, unionism cannot stand accused of lacking patience.

‘I have both patience and resolve in equal measure to see the Irish Sea border removed and stable as well as sustainable devolution restored.’

Sir Jeffrey added that the DUP’s concerns over the Protocol were ‘not merely some political squabble which is impacting upon Stormont’.

‘The Protocol is a direct challenge to the principles that have underpinned every agreement reached in Northern Ireland over the last 25 years,’ he added.

‘It erodes the very foundations that devolution has been built upon.’

Ms O’Neill accused the DUP of ‘disgracefully holding the public to ransom for their Brexit mess’.

‘Today is the day we should be forming an Executive to put money in people’s pockets and to start to fix our health service,’ she said.

‘The DUP have confirmed they will punish the public and not turn up.

‘They are disgracefully holding the public to ransom for their Brexit mess. Shameful.’

Ms Long warned Sir Jeffrey not to ‘overplay his hand’ in negotiations with the UK Government over the Protocol.

‘When you play with fire, you will get burned,’ she said.

‘We saw this with Brexit where the DUP had influence – they overplayed their hand and they ended up with the mess that we are now in and they’re now asking us all to fix it.

‘They are playing with fire again, because the institutions in Northern Ireland cannot survive in the way they are being abused.

‘The people who need these institutions most and who need stability in Northern Ireland are unionists, so I would caution Sir Jeffrey about assuming that, in another election, there will be willing partners to go into government beyond it or indeed willing people to fight a further election.

‘We have just had an election. It’s incumbent upon us all to accept the outcome of it and to make it work. That’s our job as politicians.

‘I think the DUP is playing a very dangerous game with the institutions and with the future of Northern Ireland.’

A look at Lori Harvey Weight Loss Journey Lori Harvey, an American model, and entrepreneur have disclosed that she...

A 25 years old class teacher at a nursery and primary school in Ago Iwoye...

A 17 year-old boy killed himself hours after an...
News

Stede Bonnet may not be as well known...
News