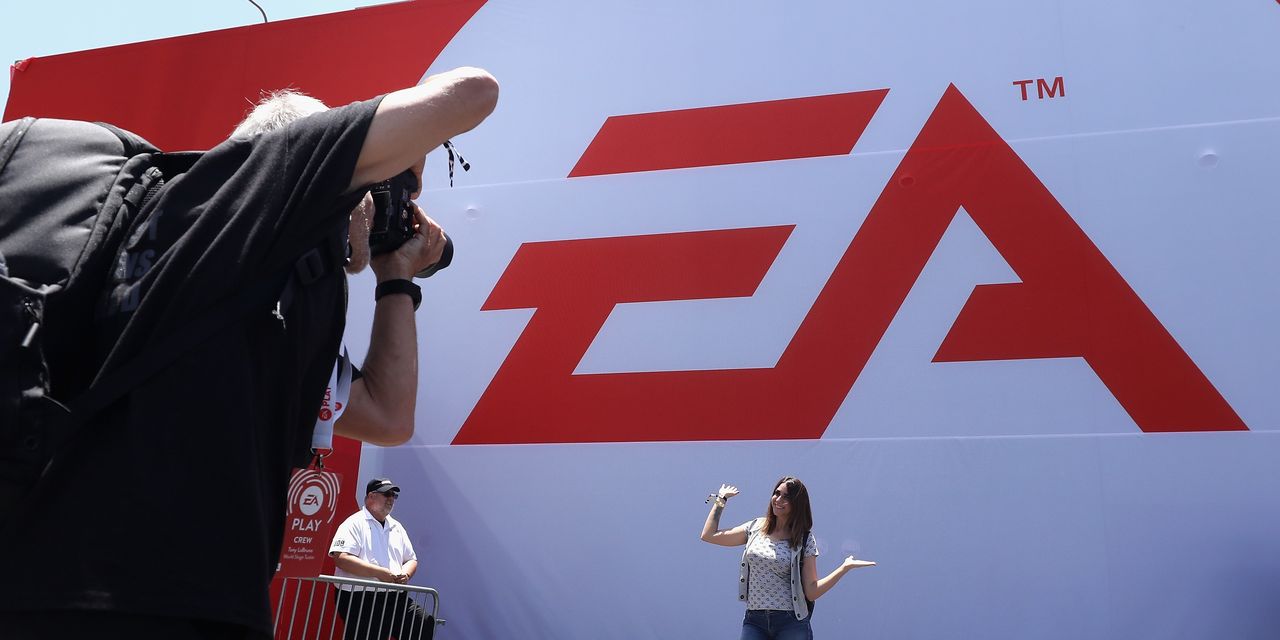 As the pandemic boom in videogames dissipates, a wave of mergers and acquisitions have rushed in to support stock prices, but that may not be enough to paper over declining usage as earnings roll in.

Even as others have forecast the end of pandemic-fueled growth this year, Cowen analyst Doug Creutz, is still bullish on videogames because of M&A. The first-quarter feeding frenzy included Take-Two Interactive Software Inc.’s TTWO, -0.06% $12.7 billion offer to buy Zynga Inc. ZNGA, -0.52% which was followed by Microsoft Corp.’s MSFT, +3.31% massive $68.7 billion offer to buy Activision Blizzard Inc. ATVI, -0.19% and many others.

Read: Microsoft could have just kicked off a Big Tech gold rush, which helps videogame stocks but maybe not gamers

However, he also notes that the potential for a purchase may not save companies that show weakness, and that is a distinct possibility after the release of many new and popular games that may have pulled fans away from previous favorites. Creutz said that slate includes the top-rated “Elden Ring” from Kadokawa Corp.’s 9468, -1.75% FromSoftware Inc.

Ratings-wise, that release is followed by Sony Group Corp.’s SONY, +2.23% “Horizon: Forbidden West” and “Gran Turismo 7,” and “Destiny 2: The Witch Queen” from Bungie, which is in the process of being acquired by Sony for $3.6 billion, if the Federal Trade Commission doesn’t step in.

“We do think there is some risk of live service softness this quarter due to an unusually strong Q1 industry release slate,” Creutz wrote.

The market will find out exactly how soft the rest of the industry has been beginning Tuesday, when Electronic Arts Inc.  EA, +0.46%, the largest publicly traded videogame publisher and the only one yet to get swept up in the merger madness, reports its fiscal fourth-quarter results after the close of trade. EA isn’t alone after Tuesday’s close: Roblox Inc. RBLX, -2.89% and Unity Software Inc. U, -3.55% will join in the fun

Early returns from one of the biggest publishers showed some weakness, but were of course wrapped up in a merger. Activision Blizzard Inc.  ATVI, -0.19%, missed Wall Street expectations in late April, but investors are more focused on the closing of Microsoft Corp.’s MSFT, +3.31% $68.7 billion acquisition of the videogame publisher, which was announced in January. Shares took a bit of a hit following earnings, but were supported by the deal while staying appreciably lower than the bid price.

Activision Blizzard shares have yet to trade at or above Microsoft’s valuation of $95 a share since the announcement. Since then, the highest the stock has closed is $82.31, following a 26% surge after the announcement. The last time Activision Blizzard shares traded above $95 was June 30, 2021, when they closed at $95.44, a month before the company went into full damage-control mode following how it initially addressed widespread allegations of sexual discrimination and harassment.

Read: The pandemic boom in videogames is expected to disappear in 2022

Late Monday, Zynga kicked off the week of videogame earnings, reporting quarterly results that were lighter than Wall Street expected. But as with Activision Blizzard, that mattered little given the company’s acquisition by Take-Two is scheduled to close by the end of June, though some analysts expected it to close by the end of May. For its part, Take-Two is scheduled to bookend videogame earnings with results next week on Monday after the bell.

Earlier in the year, Playtika’s reaction to the flurry of M&A activity was to announce in late February it was open to selling the company during its previous earnings report. In the conference call that followed on Tuesday, a company spokesman told analysts “we want to note that we do not have an update on our previously announced evaluation of strategic alternatives and will not be answering questions related to this topic.”

Here is what to expect, including rumors of more potential mergers to come.

MKM Partners analyst Eric Handler, who has a buy rating and a $162 price target on EA, said the publisher is a “transitioning sports and mobile driven story, but the pipeline needs to bear fruit” while there is “still considerable disappointment” with the November-released “Battlefield 2042” and “there are concerns about recent acquisitions, particularly the mobile transactions.”

Handler said sentiment toward EA has been “overly negative” with shares trading well below average 5-year and 10-year valuations.

In-depth: Videogames are a bigger industry than movies and North American sports combined, thanks to the pandemic

“The building blocks appear to be in place to better leverage and accelerate growth with the company’s sports franchises and other leading brands (“Apex Legends,” “Battlefield,” “The Sims”) over the next couple of years,” Handler said.

Wedbush analyst Michael Pachter, who has an outperform rating and a $180 price target on EA shares, expects them to “bounce back gradually” over fiscal 2023 as “‘Apex Legends Mobile’ could prove to be a meaningful catalyst, with 13.5 million pre-registrations at last count,” potentially “substantial” releases in fiscal 2023 and 2024, and that “M&A chatter within the space shows no signs of abating.”

Stifel analyst Drew Crum, who has a buy rating and a $53 price target on Roblox stock, expects first-quarter bookings at the social-gaming company to decline year-over-year as it faces tough comparisons from last year’s numbers that were still being boosted by the COVID pandemic, with stabilizing trends into the second quarter.

“Any commentary supporting reaccelerating growth for 2H would be well received, in our view, and may be necessary to halt the stock’s current losing streak,” Crum said.

For more: 5 things to know about tween-centric gaming platform Roblox

The Stifel analyst also expects progress on how the company is expanding the age of its user base past the traditional under-13 crowd. Crum noted that in the fourth quarter, average daily active users for over-13 users surged 49% year-over-year, while those for under-13 users grew 21%.

“Our longer-term fundamental bias here remains positive, but we think the shares are more likely to trade sideways in the interim, pending evidence of reaccelerating growth, all else being equal,” Crum said.

Covering Unity Software, Wedbush’s Pachter has an outperform rating and a $125 price target on the stock. The analyst noted that the coming report will be the first to incorporate a first full quarter of its acquisition of Peter Jackson’s visual-effects company Weta Digital for $1.6 billion, while Unity’s gaming-engine business should be strong.

“In gaming, Unity saw a 93% increase in titles created on the platform in 2021,” Pachter said. “Also, the struggles of several high-profile console/PC games built in non-Unity engines likely boosted adoption.”

“On the ad front, Unity should remain a beneficiary of mix shift towards in-game ads in the face of Apple’s AAPL, +2.77% privacy changes, offsetting most, if not all, of the drag from seasonality,” Pachter added.

Pang, however, expects app weakness to be partially offset by AppLovin’s $430 million cash-and-stock acquisition of streaming-video company Wurl, which closed in April. While the videogame sector started an M&A frenzy beginning in 2022, AppLovin’s has been going on for a year. The company’s $1.05 billion acquisition of app-monetization company MoPub from Twitter Inc. TWTR, -1.15% closed on Jan. 3, and its $1 billion acquisition of German mobile-app measurement and marketing company Adjust closed a year ago.

“Recall, 2022 is expected to be a year of elevated investment spending with improved flow-through expected to begin in ’23. Areas of investments include 1) software expenditure to build out the infrastructure for MAX, with the addition of MoPub, and AXON to exploit future growth opportunities; 2) organic investments across internal studios + inclusion of recently acquired studios; and 3) reserve for potential new growth initiatives,” Pang noted.

French videogame publisher Ubisoft, which publishes such titles as “Assassin’s Creed” and “Far Cry,” is also scheduled to report on Wednesday, although speculation of a takeover appears to be of more interest to investors.

Jefferies analyst Ken Rumph, who has a buy rating and a 59 euro price target, reasoned reports that the company’s founders, the Guillemot family, were seeking a managed buyout of the company would trigger bids from outside given the current M&A climate.

“Any proposed family-led take-private (proposal) would surely in our view open the door to alternative PE and especially strategic buyers, particularly if pitched low,” Rumph said. “Traditional peers (EA, TTWO) and platforms (Sony) ought to be credible and interested even if MSFT and U.S. big tech are ruled out by politics and Chinese buyers by politics/CFIUS. The position of Tencent (~5% holder) is interesting as it might prefer to back the family over a competitor if unable to bid.”

Read: For the videogame industry to grow, it needs to first grow up

Similarly, Wedbush’s Pachter focused his earnings preview more on speculation of a buyout than actual results, which he sees as a good thing for the company.

“Luckily for Ubisoft and its investors, the M&A chatter has been a welcome distraction from what could be an underwhelming end to FY:22 and a disappointing FY:23 outlook,” Pachter said.

MKM’s Handler, who has a buy rating and a $200 price target, called Take-Two “the most attractive name in our videogames coverage.” The company is scheduled to report on Monday, May 16.

For more: The pandemic boom in videogame demand is over, Take-Two CEO says

Pachter cited “a growing pipeline of internally developed games, highlighted by what we believe will be the long-awaited GTA 6 release in FY25,” the pending close of the Zynga acquisition, along with “a relatively inexpensive” valuation.

“Investor sentiment toward future growth prospects is mostly favorable, but there is no urgency in owning the name ahead of earnings (May 16) or until after the Zynga deal closes (~May 24),” Pachter noted.

The Duchess of Cambridge looked elegant in a coral coat dress as she joined Prince Edward and the Countess...
- Advertisement -