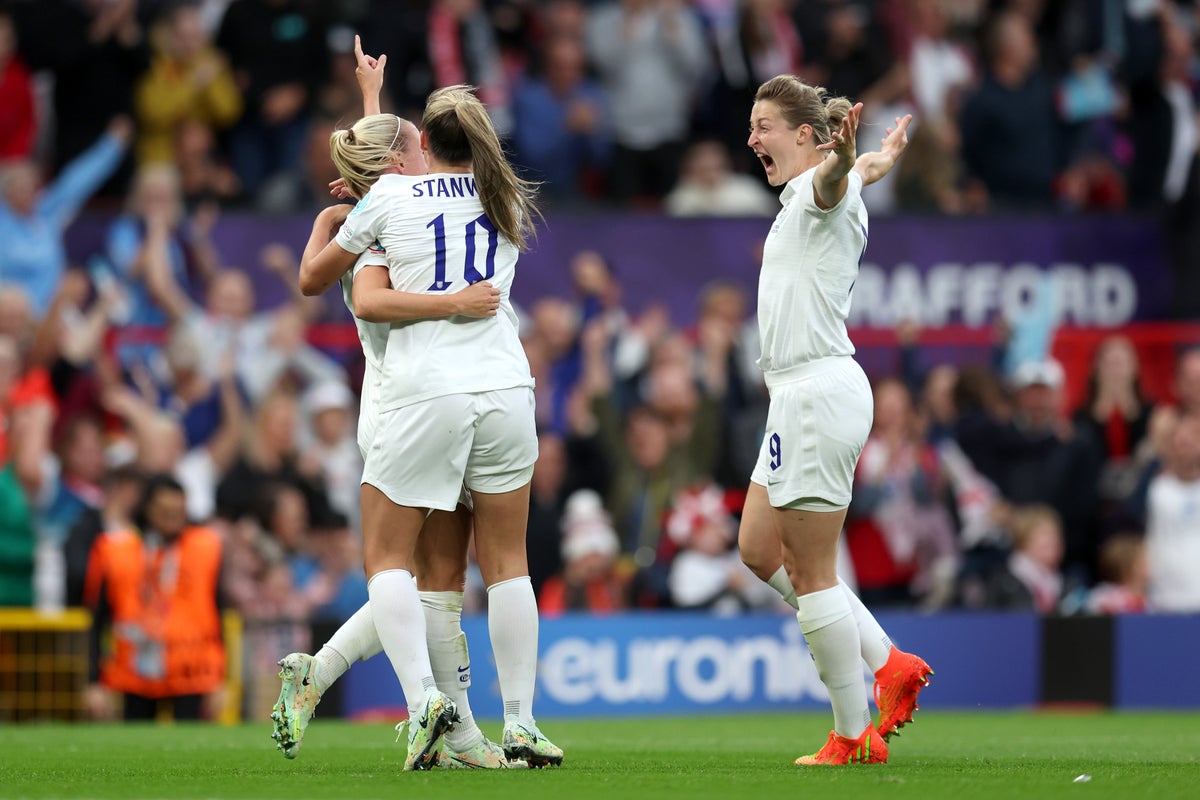 An occasion to remember, and a result that goes down in history. As for the performance, well, what’s the usual line about opening games? The only thing that really matters is getting the win, and that’s all the more important in an opening game that mattered more than any other.

This 1-0 victory over Austria at Old Trafford was a day that the women’s game in England had waited so long for, a fact that made any extra nerves in those tortuous last few minutes entirely understandable.

It’s at times like this that people say only one detail really matters but, actually, there were two. With a capacity crowd at Old Trafford of 68,871, it was a new record for the Women’s Euros.

England marked that in the best way possible, with victory.

Such a context did mean that Sarina Wiegman’s side enjoyed both a fast start to this Euro 2022 campaign, and also one that involved a long wait. The latter didn’t just apply to the build-up to this competition.

There was also the fact that England could never fully settle after Beth Mead’s inventive opening goal, after just 16 minutes.

That is the sort of thing that happens in opening games, though, let alone those with as much a sense of momentousness as this one. Even Leah Williamson had referenced “nerves” and “pressure” in the build-up. It means that some elements of the performance – like a ponderousness up front, as well as a sloppiness further back – can be overlooked for the time being.

There was also enough to be encouraged about beyond the win. Fran Kirby sparkled for the time she was on the pitch, setting up the goal and so often opening up Austria, while Georgia Stanway closed out every piece of play she was involved in with immaculate control.

Their impact reminded of something even more relevant to the game, which is why this win is a cause of relief as well as celebration.

Take everything else away and this was ultimately a game between one of the favourites for the tournament and a decent side, but one below England’s level. This was illustrated in the most obvious way after just 16 minutes, by which time Wiegman’s side had found their feet. Mead scored and did so, appropriately enough, by lifting it all. It was the characteristic moment of extra quality that won the game. The striker’s 23rd international goal came from an innovative bit of control, before she delicately lobbed the ball over Manuela Zinsberger. There wasn’t that much room for error, which was emphasised by Carina Wenninger coming so close to clearing the ball by hooking it back out off the crossbar.

It actually added to the aesthetics of the goal, but didn’t see it taken away. After a lengthy enough stoppage, England’s 1-0 lead was confirmed. They were away, and looking so much better, if not yet looking totally their best.

The goal had been supplied by a typically inventive pass from Kirby, which stood out all the more because it deviated from England’s general pattern of attack. Most of their moves ultimately saw a wide cross into the centre, one of which should have seen Ellen White make it 2-0. Despite being presented with what was pretty much a free header, the number nine put it wide.

Any variation usually came from Stanway and, above all, Kirby. It was the Chelsea playmaker who also created England’s next best chance, squaring the ball for Lauren Hemp as Austria were opened up. Manuela Zinsberger this time got her body in the way for a brilliant block, and keep her team in the game.

It meant there was always an edge in the match – except when it got to Austria’s box. England could never feel fully comfortable because they couldn’t make that second breakthrough. They were lacking that sharpness, but were reminded of the need to sharpen up 13 minutes from the end when Barbara Dunst forced a good save from Mary Earps with a speculative long-range effort.

Kirby had by that point long come off, substituted after around an hour as expected, and with her went some of England’s unpredictability.

It all factored into the final stages being much more of a grind than they might have been.

England, however, ultimately had too much of a sense of occasion.

Cara Cornell does not claim all the world feels protective and impassioned about the wetlands close to her home.But...

Paige  ThorneName: Paige Thorne Age: 24 Location: Swansea Occupation: Paramedic Who is their type on paper? ‘In Swansea there is just no-one I...

My triple-bank-shot hot take on Cheney saying she’d have difficulty supporting DeSantis in a 2024 primary is that it’s...
- Advertisement -

A straw poll at CPAC Dallas reveals the strongest choice for 2024’s Republican nominee according to conservative attendees Among Republican...

Four Muslim men have been gunned down since November 2021 in New Mexico and now...

As the MCU's introduction of mutants looms large...
News

Randi Weingarten, president of the American Federation of Teachers,...
News

POLL: Only 1% of Americans View Russia as a Major Problem