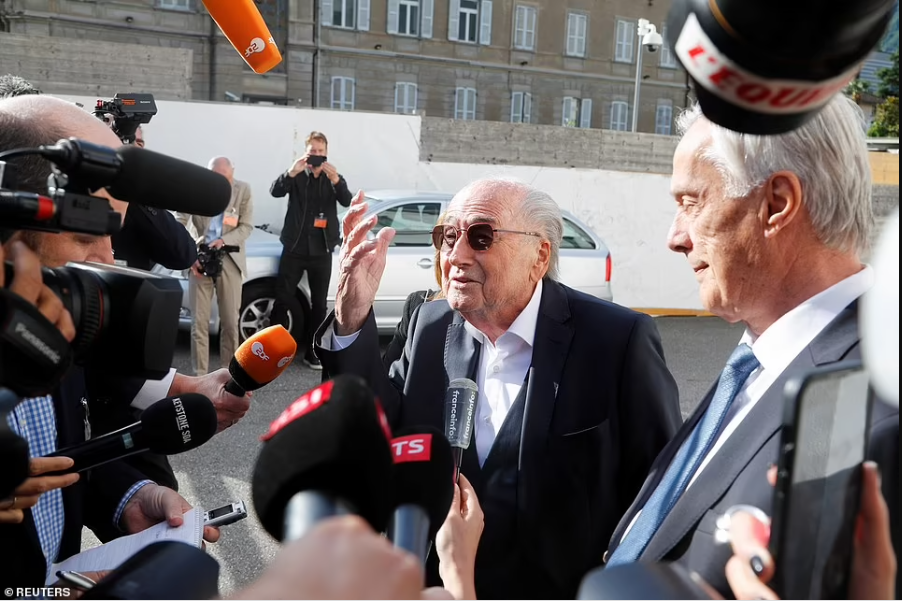 Blatter, 86, and Platini, 66, appeared at the Swiss Federal Criminal Court on Wednesday, June 8,  where they are facing corruption charges which triggered their downfall. The pair are being tried over a two million Swiss franc (£1.6 million) payment in 2011 to Platini. 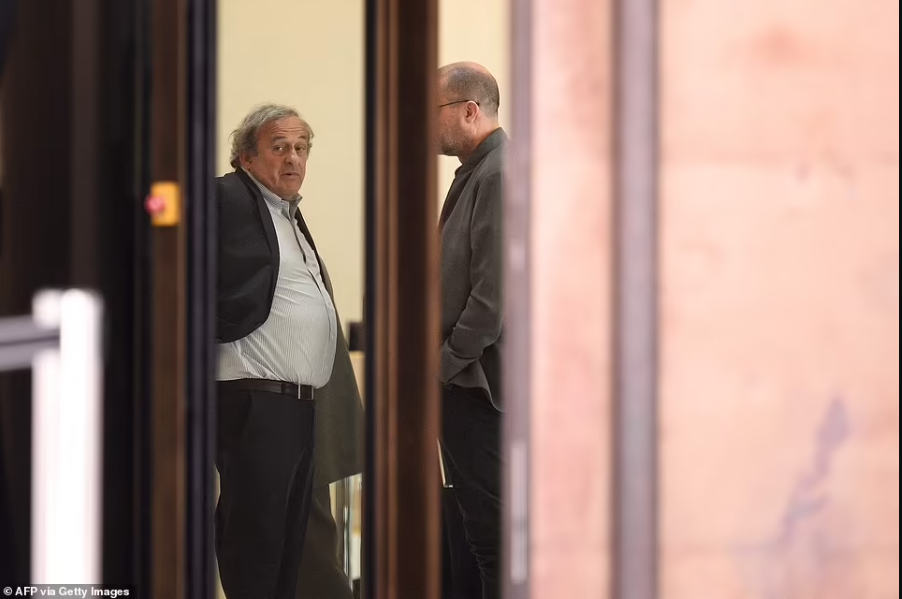 But Blatter, who has been suffering from health issues and looked frail as he made his way through the crowd towards the courthouse, told judges inside he was unable to address the court due to chest pains. 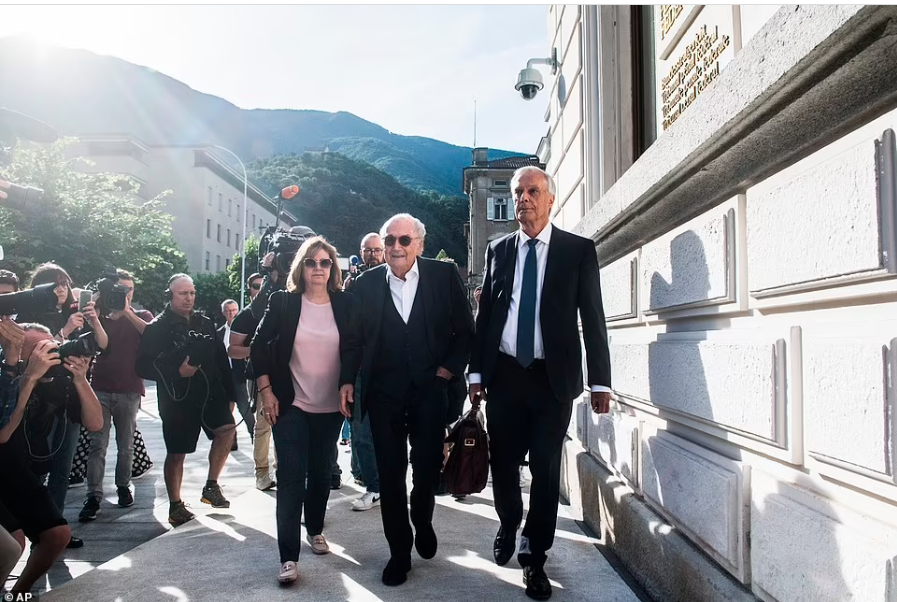 ‘The pain will come back and I am having difficulty breathing,’ the 85-year-old told the court in a whisper. The judges allowed him to make his testimony on Thursday, a day later than planned.

Earlier, lawyers for Blatter and Platini failed to shift the trial to a local court or dismiss FIFA’s civil claim against Blatter and Platter to reclaim the two million francs.

‘This case is being heard in the wrong stadium,’ Platini’s lawyer Dominic Nellen told the court, saying federal prosecutions should be reserved for large, international cases.

The judges dismissed the argument and also allowed FIFA to remain involved.

‘It is obvious that FIFA has been damaged,’ said its lawyer Catherine Hohl-Chirazi. ‘Two million francs was stolen.’

Swiss prosecutors accuse them of having, to the detriment of FIFA, illegally obtained the payment, plus social security contributions of 229,126 francs, in favour of Platini.

The former French football great ‘submitted to FIFA in 2011 an allegedly fictitious invoice for a (alleged) debt still existing for his activity as an adviser for FIFA in the years 1998 to 2002,’ according to the court.

The case meant Blatter ended his 17-year reign as FIFA president in disgrace in 2015 and torpedoed hopes by former France midfielder Platini of succeeding him. Platini was forced to quit UEFA in 2016.

Blatter arrived accompanied by his daughter Corinne and his lawyer.

‘I am absolutely confident, the sun is shining, and I’m in a good mood,’ Blatter told journalists before the hearing. ‘I know I have not done anything against the law. My life was football, for 45 years with FIFA. My life is football.’

Platini also said he was confident, and joked he would have to take course in German so he could follow the proceedings.

‘I am convinced that justice will be fully and definitively done to me after so many years of wild accusations and slander,’ he said in statement before the trial began. ‘We will prove in court that I acted with the utmost honesty, that the payment of the remaining salary was due to me by FIFA and is perfectly legal.’

Meanwhile, the court case is one of 25 investigations by the Swiss Office of the Attorney General (OAG) into corruption in football, with some 12 still pending. The United States’ Federal Bureau of Investigation (FBI) has also investigated corruption in the game.

Following a six-year investigation that began in 2015, the OAG accused Blatter of ‘fraud, in the alternative of misappropriation, in the further alternative of criminal mismanagement as well as of forgery of a document’.

Platini is accused of fraud, misappropriation, participating in criminal mismanagement as an accomplice, and forgery of a document.

Blatter and Platini, who were once close associates have both denied wrongdoing. They say they had a verbal agreement over the payment, which related to consultancy work by Platini between 1998 and 2002.

The pair were banned from the sport at the very moment when Platini was set to succeed Blatter at the helm of world football’s governing body.

With a compromise spending bill that devotes more than $360 billion to climate change efforts, consumers for the first...

Scott McTominay and Fred are 'NOWHERE near...
- Advertisement -

Gunmen have kidnapped a 4-year-old...
News

Indiana based pharmaceutical giant Eli Lilly to expand outside...
News

‘I was told if I dug a hole deep enough I’d reach China’: Pelosi explains ‘connection’ to Beijing

Nancy Pelosi said she has always felt 'connected' to...
News

‘Only one in a mask!’ Big tough Vice reporter who mocked J6 defendants PROTECTS tweets after Alex Stein makes a FOOL of her at...

Vice reporter … that really says it all.Considering how...
- Advertisement -