Fox News’ former chief political correspondent has joined a chorus of voices calling for serious repercussions against one of the network’s most prominent voices: Tucker Carlson.

During an interview with CNN’s Jim Acosta Saturday, former Fox reporter Carl Cameron was asked: ‘Do you think the Murdoch family in charge of Fox will ever pull the plug on Tucker?’

Cameron, 60, went on to compare Carlson’s broadcasts to falsely shouting fire in a crowded movie theater. 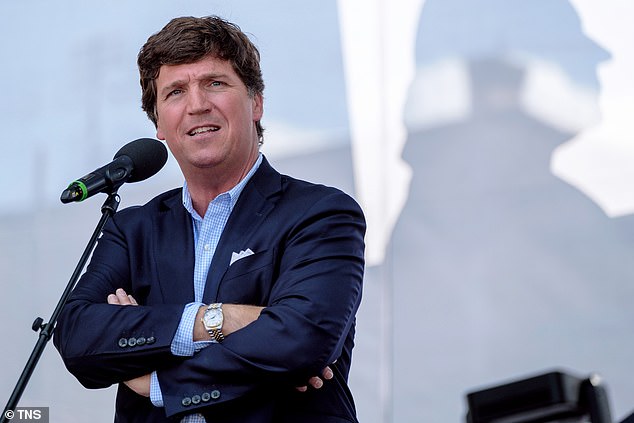 For years, Carlson, one of Fox News most popular hosts, has dealt with accusations that he has promoted white nationalist talking points

He said: ‘The president has to be more forceful and sooner or later the law enforcement and the US government is going to have to stop the lying because it’s causing people’s deaths.’

Cameron added: ‘It’s not just Fox, it’s social media in general. It’s on the internet. And we have to remember that a good portion of what we read is coming from folks who aren’t Americans, pretending to be Americans in order to gaslight them even worse.’

Carlson, host of a nightly self-titled show on Fox, has come under renewed scrutiny in the aftermath of the Buffalo supermarket shooting that killed 10 African American people on May 14.

It has emerged that the suspect in the shooting, Payton S. Gendron, was a subscriber to white nationalist ‘The Great Replacement Theory.’

The theory is something that Carlson has repeatedly been accused of espousing on his show.

It states that non-white immigration is a liberal plot to alter the cultural landscape of the United States. 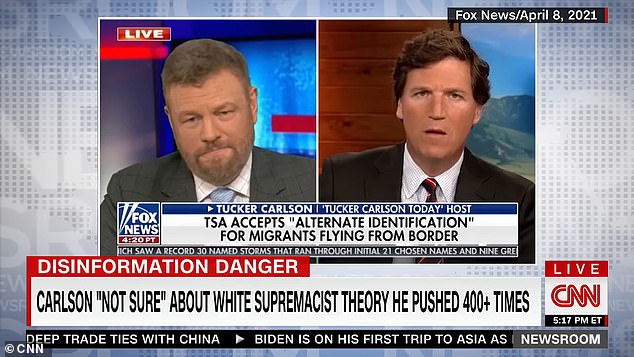 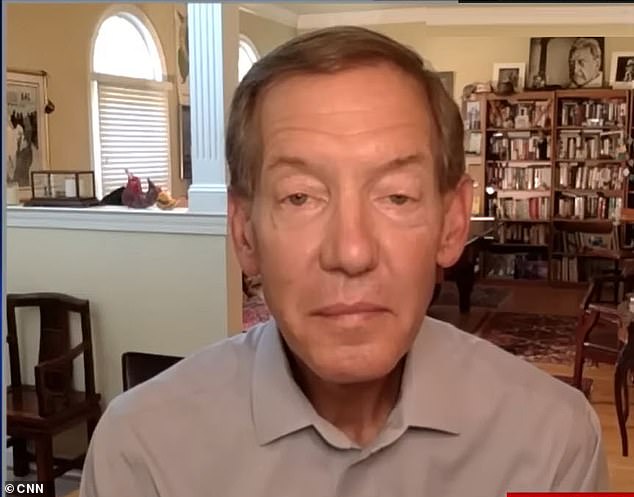 Cameron, who left Fox News in 2017, has been severely critical of the network’s promotion of opinion shows

Cameron, who left Fox in 2017, suggested that Carlson be censored and de-platformed because he ‘puts out falsehoods that cause damage and violent, violent hate.’

During his time at Fox News, Cameron earned the nickname ‘Campaign Carl’ as he followed various political campaigns across the country.

Since leaving the network, Cameron went on to found his own news website, Front Page Live.

Cameron did not directly accuse Cameron of preaching ‘The Great Replacement Theory’ on his show.

Saturday’s comments were Cameron doubling down on comments he made in an interview with MSNBC’s Nicole Wallace on May 17.

In that interview, Cameron said that the President Biden should be ‘taking some names and putting people in jail’ following last week’s white supremacist massacre in Buffalo.

Cameron first began criticizing his former employer in 2019 following the departure of Shepherd Smith from Fox. 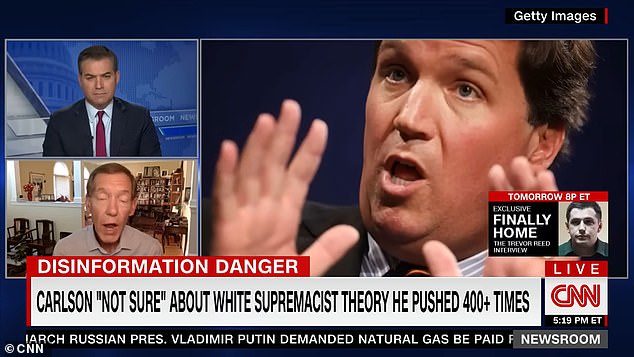 The network responded with a statement alleging that Cameron was unable to show up for work on a regular basis adding that they had shown him ‘compassion, patience and graciousness’ during his ‘multitude of personal struggles,’ according to Mediaite.

During the MSNBC interview last month, Wallace asked Cameron how Fox executives could deal with the fact that so many of Payton Gendron’s beliefs mirrored issues brought up on Carlson’s show.

He responded by saying: ‘I can’t even imagine. That’s partly why I ended up getting out of there.’

This isn’t the first time that Cameron has criticized Carlson by name, either. In July 2021, he appeared on CNN’s ‘New Day’ to accuse the host of spreading misinformation about the Covid-19 vaccine.

Cameron was also critical of Fox News for producing Carlson’s documentary on the January 6 Capitol riot named ‘Patriot Purge.’ He called the documentary: ‘Really frightening’ and a ‘betrayal to the audience,’ reports The Huffington Post.

While in 2019, Cameron told CNN in an interview that Fox News’ opinion prime-time lineup was too much for him to take, leading to his retirement from the network.

Mindy Cohn is a well-known American voice actress and actress. She began her career as a child star and...

Rabbi Osher Eisemann claims the state withheld the identity of a new witness he claims exonerates him of crimes.

A new report offers the clearest timeline yet of a mass shooting at a Uvalde, Texas, school in May...
- Advertisement -

Democrats are starting to show frustration over President Joe...
- Advertisement -