A man was found guilty of sexually assaulting a bridesmaid after a Pennsylvania jury saw video of him pulling the woman into a locker room just two days before his 2019 wedding.

Daniel Carney, 30, was found guilty on four sexual assault charges on Thursday after a 29-year-old bridesmaid accused him of forcing himself on her while she was unconscious at a pre-wedding celebration in Delaware on August 30, 2019.

Although his wife, Nicole Norris, 30, defended him on Wednesday, claiming the bridesmaid was ‘conscious’ during the incident, prosecutors presented a video on Thursday showing the moment he pulled the victim into the men’s shower room at the Shawnee Inn, in Smithfield Township, WFMZ reported

Carney faces up to 10 years in prison and will have to register as a sex offender following his sentencing in July.

His attorney said he would be filling an appeal, TMZ reported. 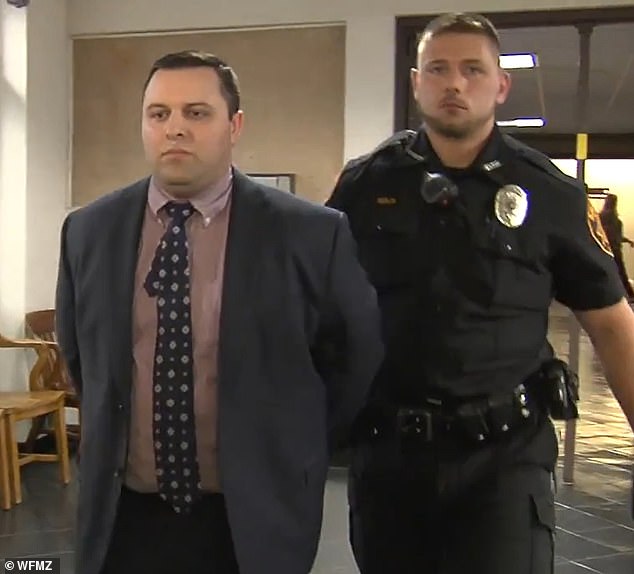 Daniel Carney, 30, was carried out of Monroe County Court on Thursday after he was found guilty of sexually assaulting charges a bridesmaid at a pre-wedding celebration in 2019 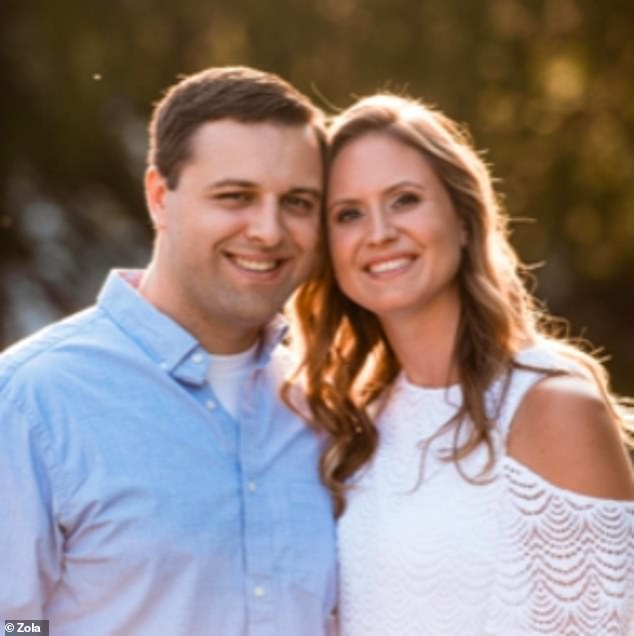 Nicole Norris, 30, defended her husband (pictured here in the profile picture for their wedding registry) in court on Wednesday. Carney, who will file an appeal, faces up to 10 years in prison 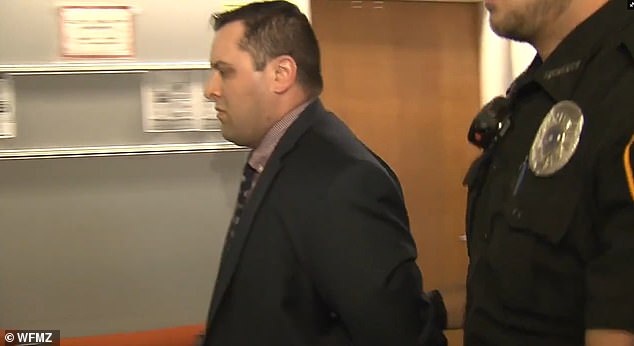 ‘She’s overwhelmed with emotion, and I think she’s pleased with the verdict as well,’ Schlottman told WFMZ.

The verdict comes two days after Norris testified that the bridesmaids was ‘conscious and aware’ of what she was doing with her then-fiancée when she caught the two of them in the shower.

The prosecutors, though, say Norris was not there the entire time the two of them were in the shower of the men’s locker room at the Shawnee Inn in Smithfield Township, so she could not have fully known what had happened.

The bridesmaid, an unnamed then-29-year-old woman from Oregon, claimed in the aftermath that, although she did not remember exactly what had happened, she had ‘woken up’ twice during the encounter.

She said she remembers Carney grabbing and biting her, and later that her bikini bottoms were off and Carney was on top of her.

Carney claims that the encounter was ‘consensual’ and insists that the bridesmaid actually initiated it. 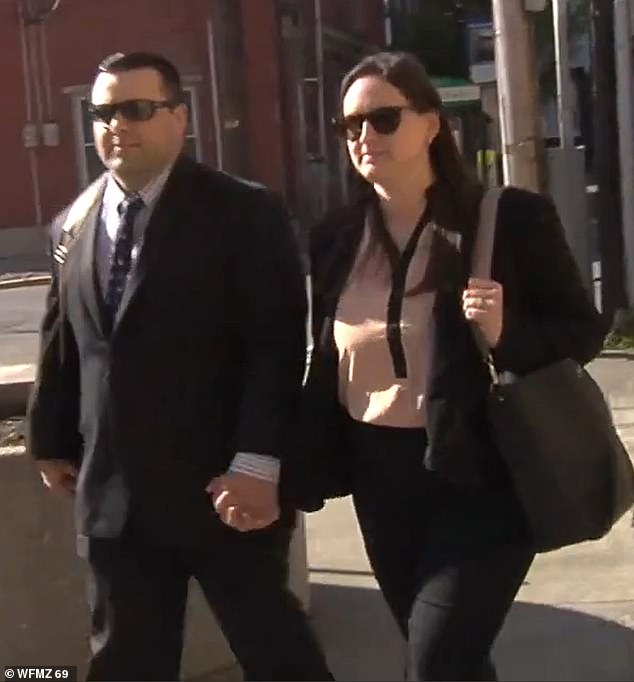 Nicole claimed in court that the bridesmaid, who has not been named, was conscious and aware of what she was doing when Nicole found her and Daniel in the shower of a men’s locker room on August 30, 2019

The entire saga unraveled in August 2019 during a pre-wedding outing with members of Nicole and Daniel’s wedding party.

They had spent the days before the wedding drinking and rafting on the Delaware River in the Pocono Mountains, where the Maid of Honor claimed Carney and his friends had asked the unnamed bridesmaid to flash other boaters for free beer.

By the time they got back to shore on August 30, Nicole reportedly noticed the bridesmaid was extremely intoxicated and had asked Daniel to help her out of the raft and into the parking lot, the Morning Call reports.

But as everyone else got back to the hotel, they reportedly realized they had not seen Daniel and the bridesmaid, so Nicole went looking for them and found them in the shower of the men’s locker room.

She reportedly then started screaming at Daniel, the bridesmaid later told the authorities, and ran out to tell the Maid of Honor what had happened.

The Maid of Honor, who has not been named, testified on Tuesday that she told Nicole she should call off the wedding, WNEP reports, but two days later – on September 1 – the wedding went forward as planned.

It is unclear whether the victim remained a bridesmaid in the wedding. 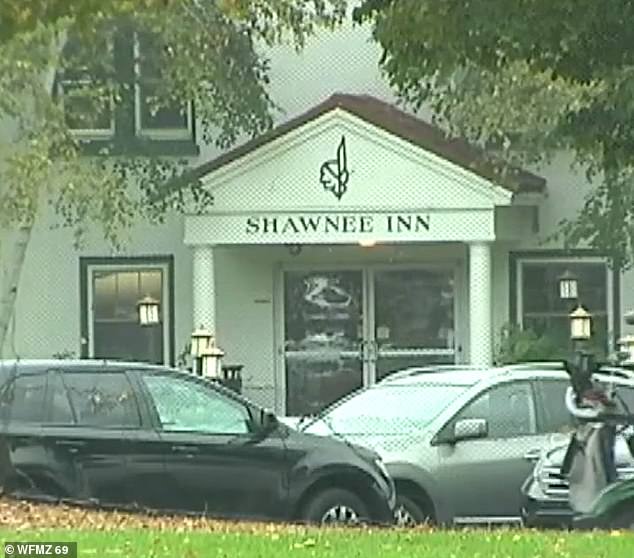 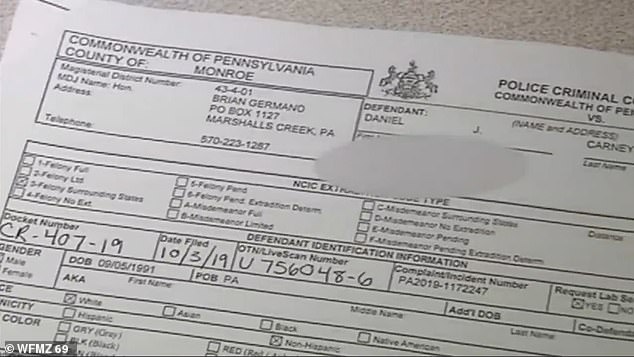 One day after the wedding, the alleged victim described the incident to local police

But the day after the wedding, the bridesmaid went to police saying she felt ‘extremely violated and upset,’ and was checked out by local doctors and nurses.

Police later found that on the morning of the wedding, Carney had texted the bridesmaid saying he was sorry and he was happy to marry Nicole, as he also asked her to take the so-called morning after pill.

‘I’m as happy as ever to marry Nicole, and I know this is terrible as well, but my d*** was out in the shower,’ he wrote, according to the Washington Post.

‘We never did do it, but would you consider taking Plan B to make damn certain just in case? There is almost no chance, but still.

They also reportedly found surveillance footage, which police said, showed Carney turning around and pulling her into the locker room as she was ‘extremely unsteady’ on her feet.

After the incident, Carney told authorities he ‘felt like he was taken advantage of by the victim,’ according to Morning Call, before ultimately admitting that he pulled her into the locker room. 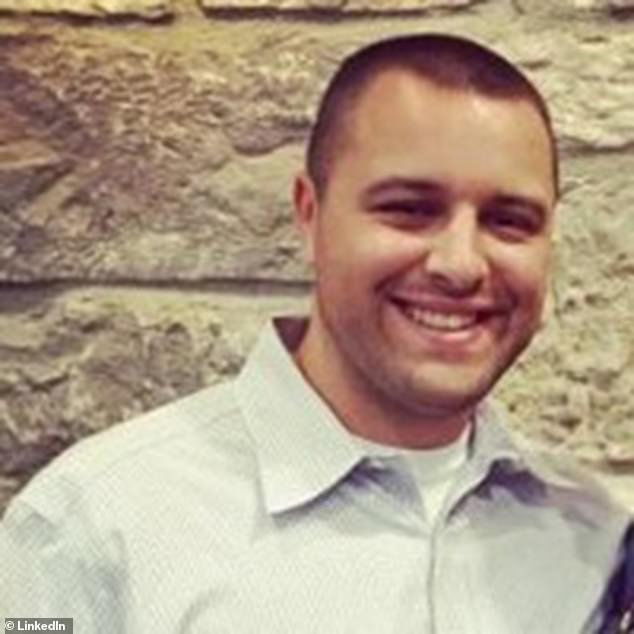 Carney claimed in court on Tuesday that the bridesmaid initiated the sexual encounter, as he admitted to asking her to take a Plan B pill – claiming it was at Nicole’s behest

But in court on Wednesday, WNEP reports, Carney testified that the alleged victim followed him into the men’s locker room.

He also said she was conscious and the entire encounter was consensual, claiming that the bridesmaid followed him into the shower and they started kissing.

Carney claims she initiated the sexual encounter, and reportedly admitted to asking her to take Plan B before the wedding, claiming Nicole asked him to text her about that.

Doctors and nurses have also testified in the trial claiming that they saw the bridesmaid in the aftermath of the alleged sexual assault with bruises all over her body, and submitted ER records and charts into evidence.

Prosecutors, though, say the injuries could have been from the rafting experience, as the girl admitted to falling three times, WFMZ reports.

A harrowing photo captured the moment a Texas sheriff's deputy responding to Tuesday's school massacre was told his daughter...
- Advertisement -

Now in its sixth week, the defamation case between...
News

If you have ever watched famous movies like...
Celeb Zone

The Ocean County Board of Commissioners has also moved...
Celeb Zone

Marcus Rashford and Lucia Loi don’t have their very...