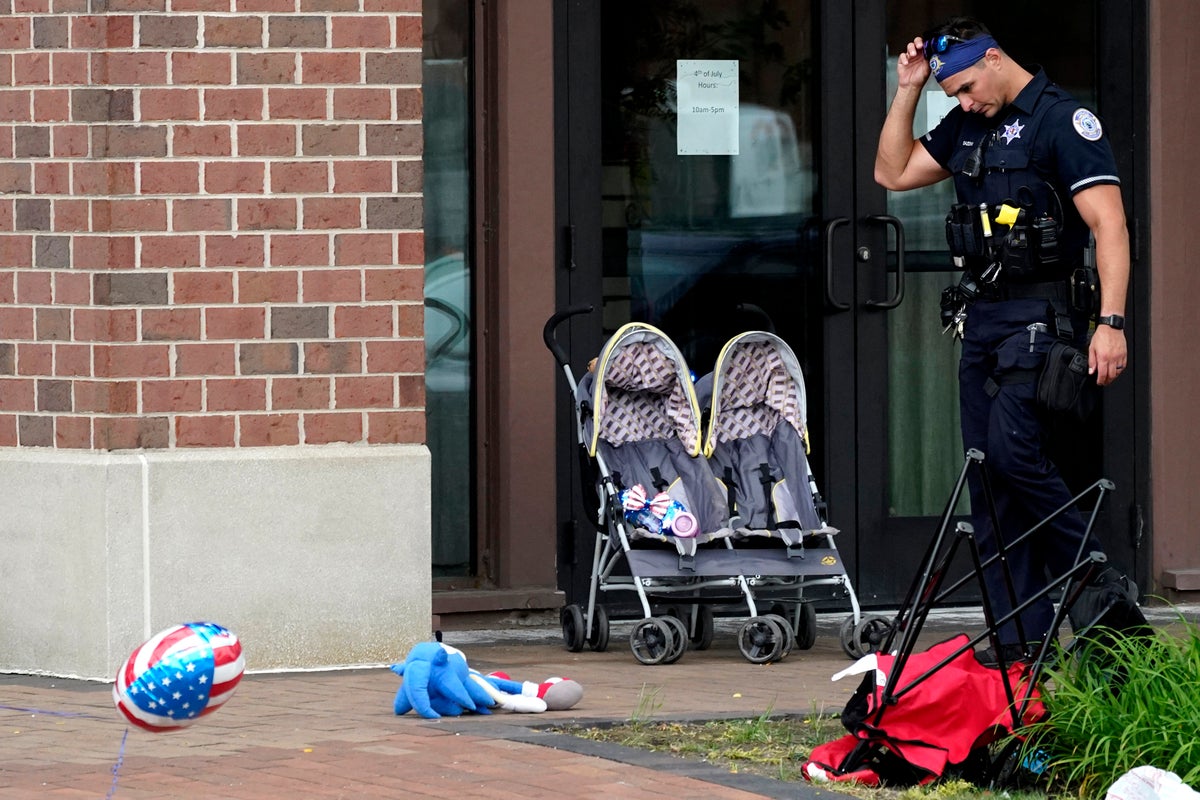 Robert Crimo, the suspect in the mass shooting at an Independence Day parade in Highland Park, Illinois, was charged with seven counts of first-degree murder on Tuesday.

If convicted, he will face life in prison without the possibility of parole. More charges, including potential federal ones, are expected to be announced in the coming days and weeks.

Authorities say the July Fourth massacre wasn’t the first time the 21-year-old has been linked to violence. In 2019, Mr Crimo threatened “kill everyone” in his home, authorities have revealed.

Lake County Sheriff deputy chief Christopher Covelli said in a press conference on Tuesday afternoon that officers were called to the home of Robert E Crimo in September 2019 and confiscated several knives, but did not arrest the suspect.

Mr Crimo is suspected of scaling a fire escape and firing more than 70 rounds down onto the July 4th parade crowd from a business rooftop, leaving five dead at the scene, fatally wounding two, and injuring dozens.

He was arrested about eight hours later after an intensive manhunt.

Mr Covelli earlier said that the suspect “planned his attack for several weeks” and dressed in women’s clothes as a disguise so that he could slip under the radar as he fled the scene.

Watch: How the Highland Park shooting played out on the ground

Fourth of July festivities cascaded into bloody mayhem in the Illinois city of Highland Park when bursts of gunfire were heard over the celebratory music and screaming spectators ran for their lives.

Appearing to be captured from the mobile phone of a teenage reveller, the video began by showing families sitting on the kerb, watching a marching band go past.

But suddenly the band members broke into a run and sprinted off in the direction of the parade route as watchers started to leap up from the ground.

Highland Park Mayor Nancy Rotering has revealed that she once served as the Cub Scout leader for Robert Crimo, the 22-year-old person charged with seven counts of murder for the Fourth of July mass shooting that left seven dead and dozens injured.

Speaking to NBC Today Show host Hoda Kotb on Tuesday morning, Ms Rotering explained that she could not say whether Mr Crimo was known to authorities before the Independence Day shooting but she had personally known him several years before when she worked as a Cub Scout leader in the area.

“I know him as somebody who was a Cub Scout when I was the Cub Scout leader,” Ms Rotering said. “And it’s one of those things where you step back and you say, ‘What happened?’ How did somebody become this angry, this hateful to then take it out on innocent people who, literally, were just having a family day out?”

When pressed by the host about whether she had any specific memories of Mr Crimo from when he was a little boy, the mayor kept her response blunt but succinct: “He was just a little boy.”

What does Robert Crimo’s ‘47’ tattoo mean?

The 21-year-old suspected of opening fire on the Highland Park 4th of July parade appears to have an obsession with the number 47.

Police believe Robert “Bobby” Crimo III dressed in a wig and women’s clothes before using a high-powered rifle to fire more than 70 rounds into a crowd in the Chicago suburb on Monday morning, killing six and wounding dozens.

Mr Crimo left an extensive digital footprint in which the aspiring rapper, who performed under the alter-ego Awake, frequently referenced the number 47.

He also had the number tattooed on the side of his face, and it was also painted on the door of a car parked outside his family home.

Bevan Hurley has the details.

Marjorie Taylor Greene admitted to spreading a photoshopped photo as she doubled down on a series of baseless claims about the mass shooting at a July 4th parade in Highland Park, Illinois.

The Georgia representative, a first-term congresswoman who is known for promoting outlandish conspiracy theories, began her bizarre assertions hours after the shooting on Monday when she suggested that suspected gunman Robert Crimo’s rampage could be blamed on illicit drug abuse or the side effects of commonly-used antidepressants.

Despite a lack of publicly available evidence indicating Mr Crimo was a drug user of any sort, Ms Greene took to Twitter late on Monday to say anyone not buying into her claims was part of a coverup on behalf of the pharmaceutical industry.

“When are we going to have an honest conversation about drug abuse, mental illness, and SSRI’s … and deadly side effects. Are we really going to keep pretending? Or covering for Big Pharma? Because I’m absolutely done with the political plays on this [bulls***],” she wrote. SSRIs – selective serotonin reuptake inhibitors – are drugs often used as antidepressants.

Andrew Feinberg has the full report.

Eric Rinehart, the state’s attorney for Lake County, has called on Illinois and the US at large to ban assault rifles.

Mr Rinehart, a Highland Park resident himself, said Illinois already has a strong red flag law, but that more needs to be done to avoid further gun tragedies.

Robert Crimo’s fixation with violence appears to have left the online world and entered the real lives of innocent families, friends and locals who had turned out to watch the July 4 parade at Highland Park.

Rachel Sharp has the details.

A loving grandfather, a married couple with a two-year-old son, and a preschool teacher are among the seven victims fatally wounded during the Independence Day mass shooting in Highland Park.

The Highland Park shooting suspect “pre-planned his attack for several weeks” and wore women’s clothing as a disguise so that he could escape the scene of the mass shooting where he had just killed six victims, according to law enforcement.

Should officials have done more to stop Robert Crimo from getting a gun?

By the time he allegedly committed the Highland Park shooting, Robert Crimo, 21, had five weapons, including two rifles, pistols, and possibly a shotgun, according to police.

At the stage in the investigation, officials say it appears Mr Crimo bought the guns legally in the Chicagoland area.

That’s depsite two troubling incidents in 2019, when Mr Crimo reportedly attempted suicide and later threatened to kill his whole family, and an Illinois “red flag” law meant to keep guns out of people at risk of being violent.

Illinois State Police say that because neither 2019 incident lead to any charges, arrests, or firearms seizures, there wasn’t enough for them to declare a clear and present danger and deny the FOID application.

The '80s saw the release of many fan-favorite...
- Advertisement -