How can Australia do a vaccine rollout if state premiers can’t work together?

The Weird History of UFO Cults, And How It’s Only Going to Get Worse.

Confused about what on Earth is going on with Australia’s growing coronavirus outbreaks this week?

You weren’t the only one.

With the Delta strain rampaging through Sydney, spreading to Victoria, and now popping up in Adelaide with a new mystery case in Queensland, timely and comprehensive information is as important as ever.

But this seems to be lost on our bickering state premiers who keep managing to schedule their Covid press conferences at the same time.

Gladys Berejiklian in NSW and Dan Andrews in Victoria stood up to the microphone at almost exactly the same time on Sunday and less than half an hour apart on Monday. 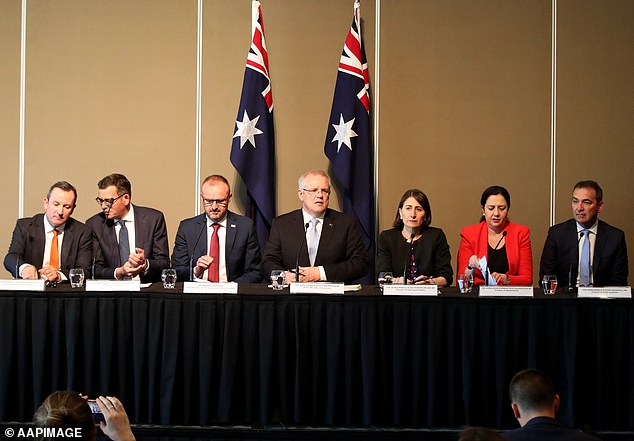 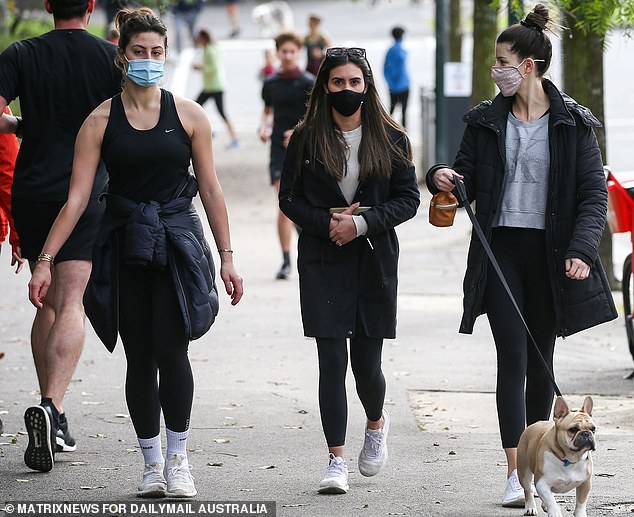 With the Delta strain rampaging through Sydney, spreading to Victoria (pictured), and now popping up in Adelaide with a new mystery case in Queensland, timely and comprehensive information is as important as ever

Then on Tuesday, Ms Berejiklian started at 11am, as she has since the outbreak began five weeks ago, only for Mr Andrews to gatecrash it at 11.15am.

Meanwhile in South Australia, Premier Steven Marshall also began at 11am, though in fairness his address was pushed back half an hour.

Things did not improve on Wednesday as NSW started at 11am and both South Australia and Victoria – minus an MIA Mr Andrews – at 11.30am.

For the media, used to dealing with all hell breaking loose at once, this is merely inconvenient.

But for Australians worried about the pandemic it was incomprehensible at best, and full of mixed messages that undermine confidence in our fight against Covid at worst. 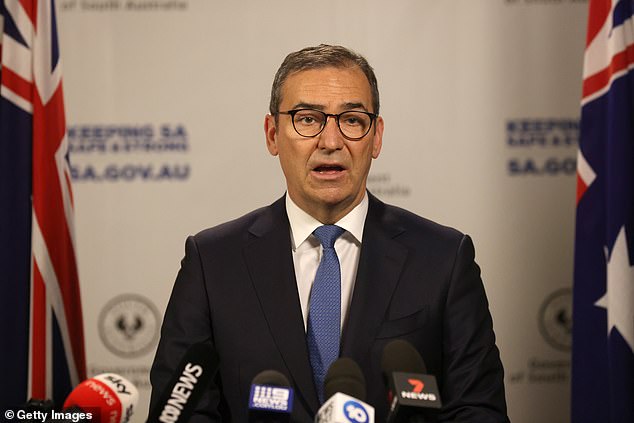 Premiers obviously have a duty to their state first and foremost, but as the Sydney outbreak jumping to Victoria last week showed, this is a national problem.

Australians want to know what is going on with outbreaks, or lack thereof, in other states that could be just three roadtripping removalists away from invading their backyard.

Many also have family and friends interstate they worry about, or want to break their Covid-induced boredom with an interstate holiday.

So why, then, can’t our premiers and their flunkies make a few phone calls and coordinate their press conferences so they don’t horrifically clash?

Emergencies happen and sometime you can’t wait the 75-plus minutes it takes for Mr Andrews and his crew to finally wrap up, but on most days this is surely possible. 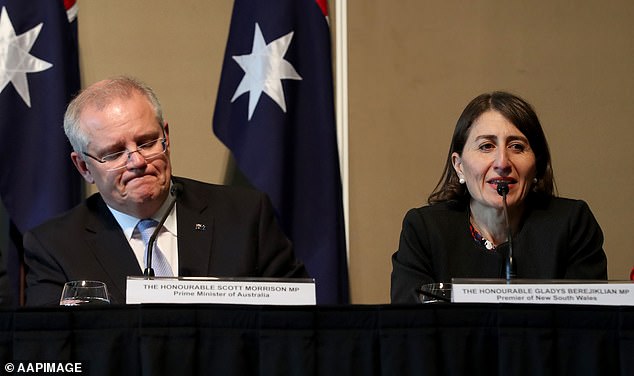 Mr Morrison has repeatedly put the figure at 65 to 70 per cent, but on Wednesday, as she has done previously, Ms Berejiklian said 80 per cent of the population or 62 per cent of adults was needed

The AFL and NRL mostly manage, as do the Olympics and the Tour de France.

An obvious factor is the petty rivalries that emerged over the past 18 months between Ms Berejiklian and both Mr Andrews and Queensland leader Annastacia Palaszczuk, and WA Premier Mark McGowan and everyone else.

In turn, the Victorian, Queensland, and Western Australian leaders also devote plenty of time to bashing Prime Minister Scott Morrison and his cabinet, to add an extra dimension.

Much has been written about how much Ms Berejiklian and Ms Palaszczuk appear to loathe each other for more than party-political reasons.

The animosity peaked last year during the hard border era when Queensland denied entry to critically ill people less than 100km on the wrong side of an imaginary line, or interstate residents literally begging to see dying family. 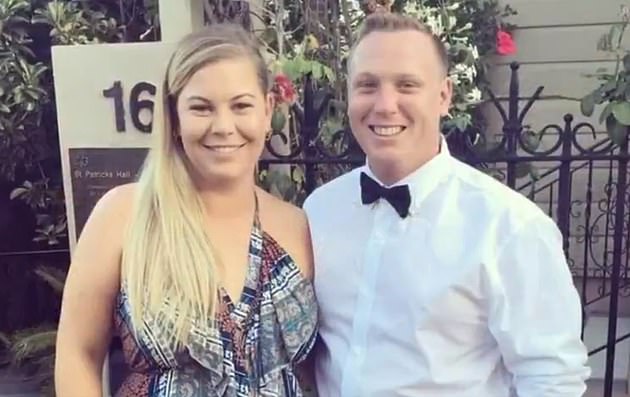 Kimberley Brown and her husband Scott, from Ballina, in northern NSW, learned that they had lost their unborn baby after being forced to travel 750kms because of Queensland’s border restrictions

Mr Andrews also can’t seem to do a press conference without taking a swipe at his northern neighbour – including every day this week.

On Tuesday he was talking about ‘defending our border to the north’ and on Sunday quipped the virus ‘got from Sydney to Melbourne pretty quick’ and that his state was dealing with ‘the problems of Sydney’.

Mr Andrews has good reason to be upset right now, of course, but even when NSW was Covid-free, as it usually is, he was attacking Ms Berejiklian.

But even if we assume personal enmity is merely an aggravating factor, the apparent inability of state leaders to cooperate even on scheduling is alarming.

Just look at the farce National Cabinet has become, with barely any binding resolutions agreed to and no national framework or definition for anything.

When last month Ms Palaszczuk and Mr Andrews demanded deep cuts to the overseas flight cap that had already left 36,000 Australians stranded overseas but were denied, they jumped up and down on TV until they got their way at the next meeting. 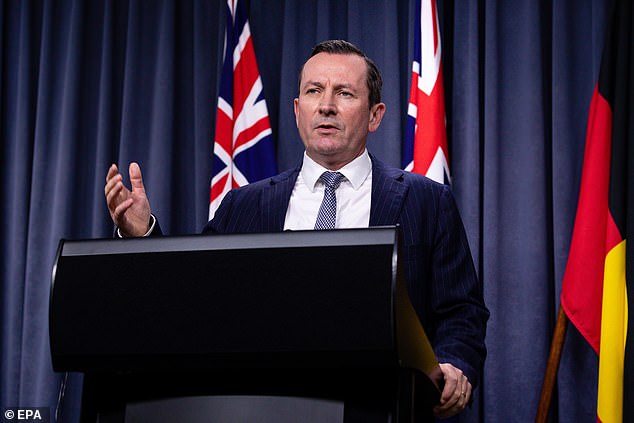 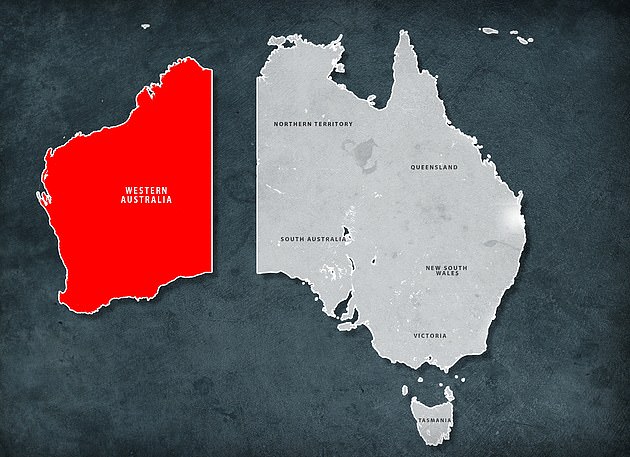 Mr Morrison and numerous state leaders also can’t agree enough to rapidly build the dedicated quarantine hubs we should have had a year ago.

Instead, we keep getting leaks from hotel quarantine that lead to outbreaks that create ever more arguments.

With all this sniping, grandstanding, and inability to coordinate on basic issues, is it little wonder that just 11 per cent of Australians are fully vaccinated after five months?

Much of the blame must fall to the federal government, which comprehensively botched the rollout by putting almost all its eggs in the AstraZeneca basket, instead of diversifying with millions more Pfizer and Moderna doses.

Compounding this, it then failed to reassure the public – as Britain successfully did – that your odds of dying from a rare blood clotting disorder linked to the jab are about one in 2.5 million.

You’re probably more likely to be run over by a car on the way to get the jab than die from it.

But even here, mixed messaging between states couldn’t help but make matters even worse.

Last month, Mr Morrison announced as a change in policy that all Australians could get the AstraZeneca jab after consulting with their GP – not just the over-60s recommended by health authorities as lower risk of blood clots. 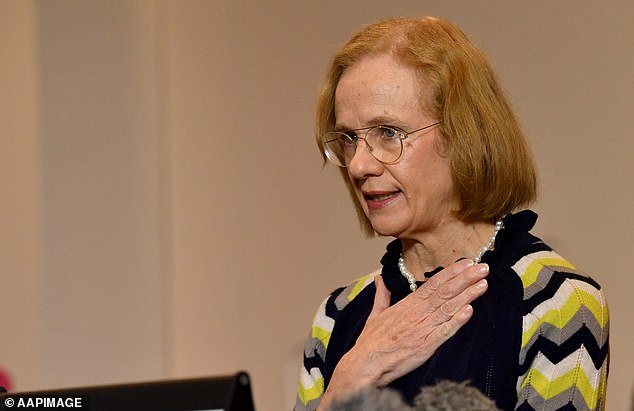 Dr Jeannette Young: ‘My advice is that if you’re under 40, you wait and get the Pfizer or the Moderna vaccine’

Within hours, Ms Palaszczuk and her chief health officer Jeannette Young went rogue and strongly advised younger Queenslanders not to get the jab.

‘I don’t want an 18-year-old in Queensland dying from a clotting illness who, if they got Covid, probably wouldn’t die,’ Dr Young said.

This was widely denounced by non-government experts who accused them of ‘fearmongering’ and ‘talking down’ to Australians.

State and federal leaders also can’t get on the same page over how many Australians need to be vaccinated before most restrictions can finally be ditched.

Mr Morrison has repeatedly put the figure at 65 to 70 per cent, but on Wednesday, as she has done previously, Ms Berejiklian said 80 per cent of the population or 62 per cent of adults was needed.

Mr McGowan puts the figure even higher, insisting on ‘at least’ 80 per cent and possibly 90 per cent. 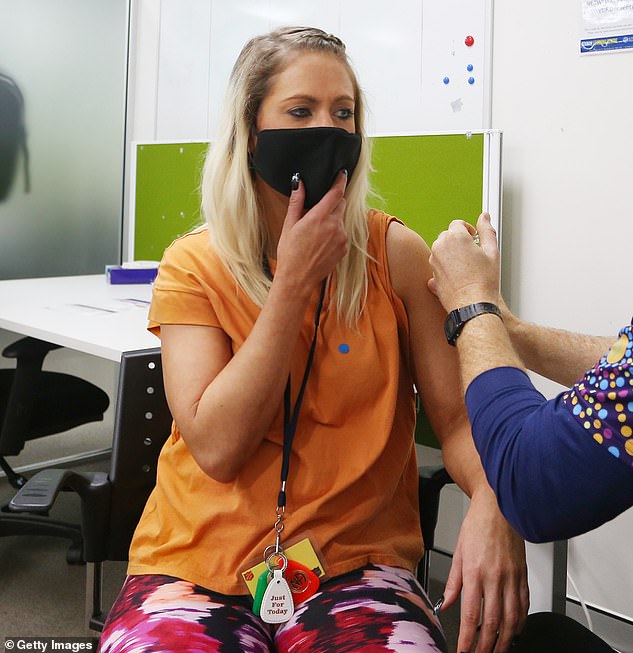 With all this sniping, grandstanding, and inability to coordinate on basic issues, is it little wonder that just 11 per cent of Australians are fully vaccinated after five months? 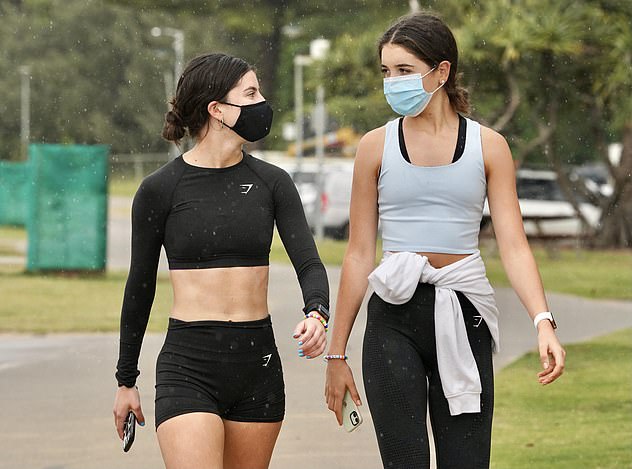 More recently there has been endless complaining and accusations of party-political favouritism about diversion of extra Pfizer doses to state hit by outbreaks.

Not to mention the allocation of federal money to help administer the vaccines and compensate workers whose jobs disappeared in lockdowns.

Australia is already vastly behind the world in administering the vital Covid vaccines that will allow us to get back to normal – we hope.

State leaders, who are benefiting dramatically from the pandemic in the polls, have opportunities to be constructive leaders who put their differences aside to help their constituents with the biggest global challenge since World War II.

Instead they are squandering their chance to make a real difference with petty bickering, poor communication, mixed messages, and what appear to be personal grudges.

We don’t just deserve better, we need them to do better. Or we’re all stuffed.