Huh: Are MAGA Republicans coming around on reforming the Electoral Count Act? 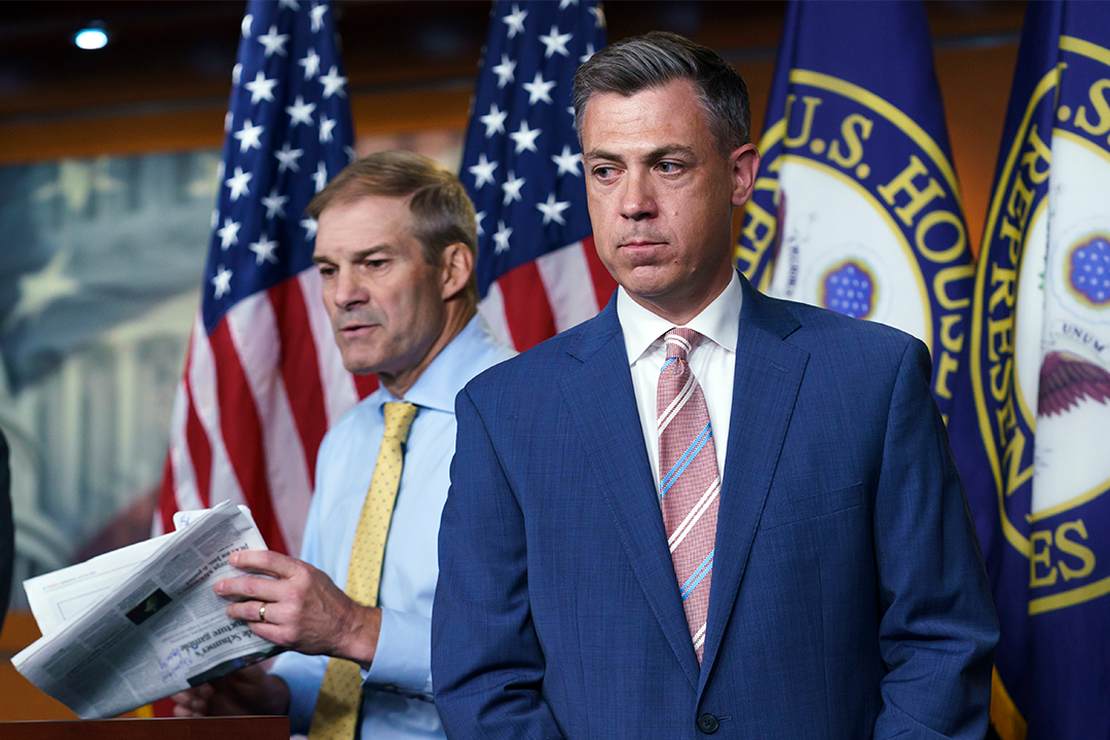 A genuine surprise. So much so that I’m sitting here trying to figure out what the ulterior motive might be, with no clear answer.

Remember that there are three stages at which an election might be manipulated:

Democrats are consumed with the first stage, scrambling to try to pass federal voting rights bills in the belief that recent election reforms in swing states like Georgia will tilt contests going forward towards the GOP. Those efforts are DOA thanks to Joe Manchin and Kyrsten Sinema. Republicans in Congress are focused on the third stage, remembering what happened on January 6 last year after Trump spent two months inciting his fans to believe that Congress was about to perpetrate a fraud on them. It’s no surprise that anti-Trump GOPers like Mitt Romney and Ben Sasse would be interested in amending the Electoral Count Act, the statute that governs Congress’s certification procedures on January 6, to prevent that from happening again.

The idea of targeting the 1887 Electoral Count Act for repairs has now garnered support from some of Congress’ most conservative members, as well as leading House Democrats. It may be the best chance of passing any form of election reform in an otherwise divided Congress…

“It’s a muddled, flawed [act] and Congress must clarify the essential process of certifying elections,” Rep. Jim Banks (R-Ind.), who objected to certifying the Arizona and Pennsylvania electors last year, said in a statement to Axios…

[Ron] Johnson told Axios he’s receptive to the argument there are “problems” with the law as written.

“I understand people saying: ‘Huh, maybe something should be taken a look at.’ … I’m always happy to look at things.”

Banks is enough of a MAGA guy to have been one of Kevin McCarthy’s original appointments to the January 6 committee, obviously with an eye to disrupting the committee’s work. Pelosi blocked his appointment for exactly that reason, triggering a boycott of the committee by the Republican caucus (apart from mavericks Liz Cheney and Adam Kinzinger, of course). As noted in the excerpt, Banks also objected to certifying the results in multiple states last January, another show of MAGA devotion.

Now here he is demanding that Republicans join with Democrats to reform the law that made those objections possible. An effort which, by the way, has been described by some as an attempt to “Trump-proof” the next election.

What gives? Since when are Banks and Ron Johnson anything but loyal servants to the once and future king? I can’t figure out what Banks’s game might be. Possibilities:

1. He’s earnestly concerned about what another attempted coup in 2024 would do to the country and is willing to cross Trump this one time to head it off. Possible, but unlikely. Loyalty to Trump is loyalty to the country for most MAGA Republicans.

2. He doesn’t realize that Trump will eventually come out foursquare against reforming the Act as the legislation gains momentum. Also unlikely. Banks isn’t stupid and surely understands by now that Trump will oppose any effort to limit his ability to “win” in 2024 by hook or by crook. Trump is counting on having Republican majorities in the House and Senate and will expect those majorities to overturn the state results if he loses again. Reforming the ECA to make it harder for Congress to do that won’t sit well with him.

3. He’s worried that Kamala Harris might do what Trump wanted Mike Pence to do in 2020. This is possible, and certainly justified if we’re thinking long-term. It’s imaginable that a crooked Democratic strongman might someday try to follow Trump’s 2020 playbook to stay in power. But Joe Biden isn’t a strongman. And Kamala Harris is so weak that she can’t look an interviewer in the eye when she’s stumbling through a cringy answer to his questions. Neither one has the sort of cult devotion that would make an autocratic usurpation of the electoral process feasible.

4. He’s engaged in gamesmanship, pretending to be interested in the ECA so that centrist Dems will focus on that instead of on the left’s voting rights bills. Many progressives suspect Senate Republicans of having this ulterior motive in wanting to work on the ECA, but it’s stupid. Manchin and Sinema have said every which way they know how that they’re not going to change the filibuster to pass voting rights. Those bills are dead and have been dead for months; the left is simply in denial about it. Given the reality, though, GOPers gain nothing from feigning interest in the ECA. They could walk away from electoral reform entirely and still not need to worry about the voting rights bills passing.

5. He knows the effort to overturn the election in 2024 will happen at the state level, not when Congress meets on January 6. This is Chuck Schumer’s theory of why Republicans want to reform the ECA. Supposedly, by limiting Congress’s ability to overturn the results, the GOP is hoping to make it easier for state officials to commit fraud on Trump’s behalf — that is, the fraud will happen at stage two of the electoral process and Congress’s ability to undo it in stage three will be hobbled. If he loses the vote in Georgia again in 2024 but the Republican-controlled state legislature decides to award him the state’s electors anyway, the new ECA might prevent the House and Senate from acting to overturn that. I wouldn’t rule that out as a motive for some of the more sinister “stop the steal” aficionados in Congress, but ultimately it’s a drafting problem. Congress needs to anticipate chicanery by the states and provide remedies in the reformed Electoral Count Act.

6. He recognizes that the public will strongly support ECA reform and wants to signal agreement in principle before trying to sabotage it. This is the likeliest explanation, I think. It’s very, very hard to argue that everything’s hunky dory with how Congress certifies electoral votes after January 6, 2021. Banks has to concede that the law needs work. What he doesn’t need to concede are any specifics. It’s a cinch that he and other MAGA types will find an excuse to oppose any bipartisan version of a new ECA that emerges.

According to the Times, there are several versions currently circulating in the House and Senate:

One proposed change would make clear that the vice president has only a ceremonial and administrative role in the counting of electoral votes. Another would make it far more difficult to raise objections under the law, which currently allows a single senator and House member to mount a challenge to a state’s electoral votes. In the bill drafted by Mr. King, Mr. Durbin and Ms. Klobuchar, electors could be challenged only if a third of each chamber objected.

In the House, four members of the committee investigating the Jan. 6 attack — Representative Liz Cheney, Republican of Wyoming, and Representatives Zoe Lofgren and Adam B. Schiff of California and Jamie Raskin of Maryland, all Democrats — are also working on a rewrite of the Electoral Count Act. They have also discussed whether to expand their bill to include measures blocking anti-democratic election practices at the state level, such as allowing partisan legislators to select presidential electors instead of the voters…

[Susan Collins’s Senate group is] still debating how far to go in blocking the removal of nonpartisan election officials without cause by partisan state officials or legislators. The Democrats’ voting rights bill makes such actions a federal crime unless malfeasance by the election official can be proved.

Yeah, any conscientious reform to the ECA has to address election subversion at stage two, the vote-counting process at the state level, not just stage three. If Congress somehow makes the January 6 certification process airtight, all but incorruptible procedurally, Trump will simply shift his pressure campaign entirely to state officials. As hard as he lobbied Brian Kemp and Brad Raffensperger to “find” some more votes for him in Georgia, he would have pressured them much harder if he hadn’t believed that he still had Mike Pence and Congress as his ace in the hole on January 6.

I’m not crazy about the new threshold for objections to certification, though. Requiring one-third of each house to object instead of a single member from the House and Senate is a major improvement, but it’s not unthinkable that a Senate Republican caucus that’s increasingly beholden to Trump might find 34 members to object on his behalf. Requiring one-half of each chamber to object would be better. But I assume this is a case of Democrats thinking ahead to the possibility of stage-two fraud in 2024: They don’t want the bar for objecting to be set so high that they can’t muster an objection if they’re in the minority in both chambers, which they’re increasingly likely to be.

Here’s Mitt Romney talking about ECA cooperation yesterday. In lieu of an exit question, read Chris Truax on the many holes in the current Electoral Count Act that present opportunities for election subversion. Quote: “Any party that controls both houses of Congress and has the necessary political will can install their candidate as president of the United States regardless of who actually won the election.”

WATCH: If Biden calls & says “can we sit down and have a conversation” about voting rights, would you participate?

“Sadly … I never got a call on that from the White House. There was no negotiation. … Sure, we can work together on almost every issue.” pic.twitter.com/HshbCVX3gr

Share
Facebook
Twitter
Pinterest
WhatsApp
Previous articleChris Christie to Trump on 2020 election: “Get over it.”
Next articleReport: Epstein’s Lawyer Tried to Get Pedo Island Caretakers to Lie and Say Bill Clinton Was Never There

Friday I blasted Meghan Markle for showing up in tragedy-stricken Uvalde, Texas, in what seemed like little more than...

28 May 2022Only yesterday (May 27th, 2022), actor Dwane Johnson took to Instagram and announced some pretty exciting news… Dwayne...

Who is Ashley Alvano? Social media platforms have never been more popular than today; many people have used social media...
- Advertisement -

Who is Sheryl Berkoff? Sheryl Lynn Berkoff was born on...
- Advertisement -