Sleazy Hunter Biden is seen filming himself smoking drugs and fondling himself inside a sensory deprivation tank – during a detox program funded by his dad Joe.

The president’s exhibitionist son, 52, is bathed in trippy green light as he floats naked on his back and plays with himself in the shocking cell phone video retrieved from his abandoned laptop.

He leaves briefly to grab a can of White Claw hard seltzer and what appears to be a crack pipe before taking several hits and staring wild-eyed into the camera as ambient music plays softly in the background. 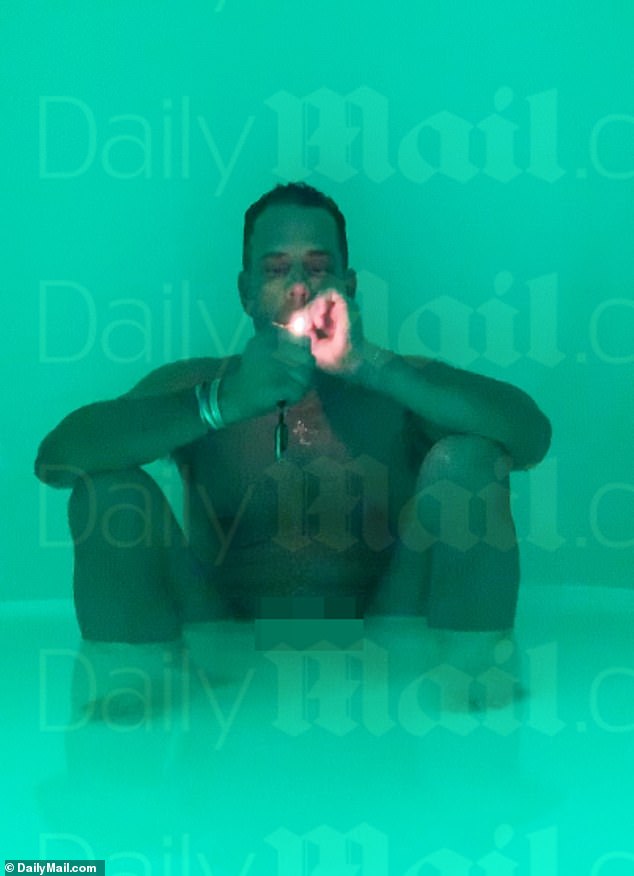 New footage has emerged of Hunter Biden smoking drugs, drinking, and fondling himself while floating in a sensory deprivation tank in January 2019 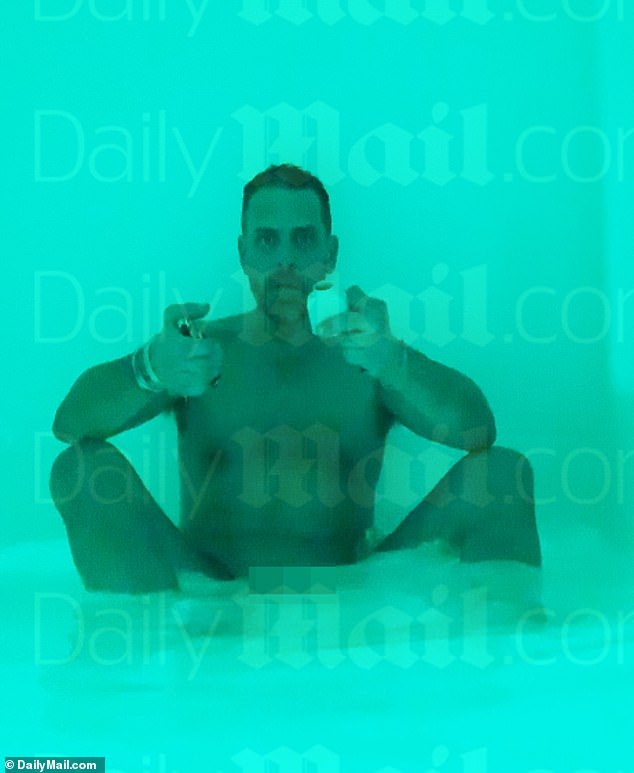 The video, recovered from a backup of his cell phone found on his abandoned laptop, shows the president’s son bathed in trippy green light and indulging in drugs and alcohol as he floats in the water 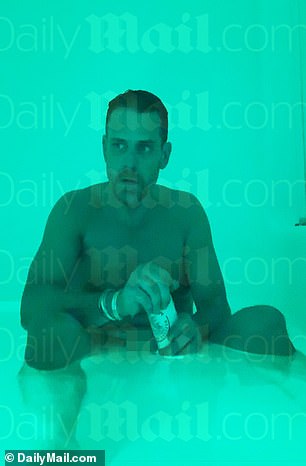 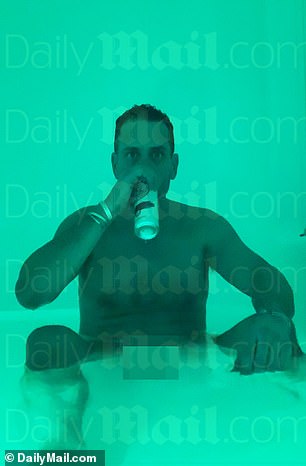 He was urged to visit the spa by a therapist pal, whom the First Son had turned to for help in his battle to kick drugs.

Just one month earlier Hunter had texted his dad Joe complaining that he didn’t have enough money for the treatment program on top of bills and alimony.

‘Hey dad I’ve been trying to resolve some immediate financial issues – alimony tuitions and my bill for this program but the cash I am counting on will not arrive until the end of the week.

‘Is it possible to make me another short term loan in the same amount and I will send it back no later than 10 days.

‘I’m really embarrassed to ask and I know it’s unfair of me to put you in that position right now,’ Hunter wrote on December 4, 2018.

‘Hunt tell me what you need. No problem,’ the future President responded. ‘Ok how do you want to do this I can pay tuition directly and their housing and give you the rest.’ 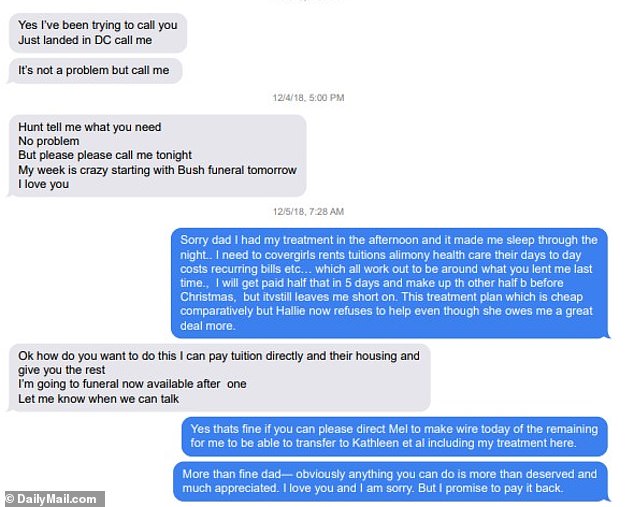 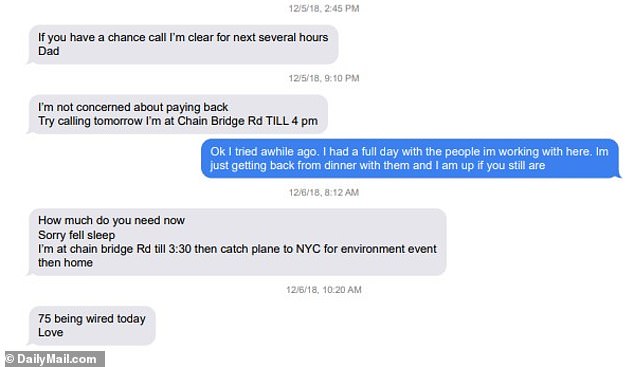 Just one month earlier Hunter had texted his dad Joe complaining that he didn’t have enough money for the treatment program on top of bills and alimony, text messages show 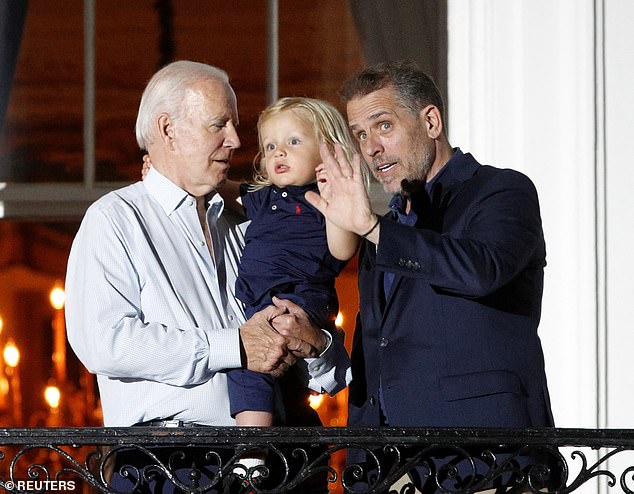 In another exchange weeks later, just before New Year’s Eve, Hunter messaged his father convincing him to fund a $20,000 three-month program at a ‘sober house’ and detox facility in New York City.

A supportive Joe happily obliged, replying in a January 2, 2019 text to Hunter: ‘Just called Mel he will get 20 to your account this afternoon tomorrow morning at latest. He will contact me when transfer goes through.’

Hunter’s cellphone videos would later show, however, that he had gone to the wellness center in Massachusetts later that month instead.

The video and corresponding messages are the latest compromising materials retrieved from backed up iPhone data on Hunter’s abandoned MacBook pro – the so-called ‘laptop from hell’.

Hunter also referenced his ketamine regimen in a December 5, 2018 message to a female friend.

‘That’s good baby what does it do,’ she replied. ‘Let’s get freaky tonight on webcam.’

In another text sent January 1, 2019, Hunter made it abundantly clear who was funding his unconventional treatments, writing: ‘By the way my dad is paying for whatever I need.’ 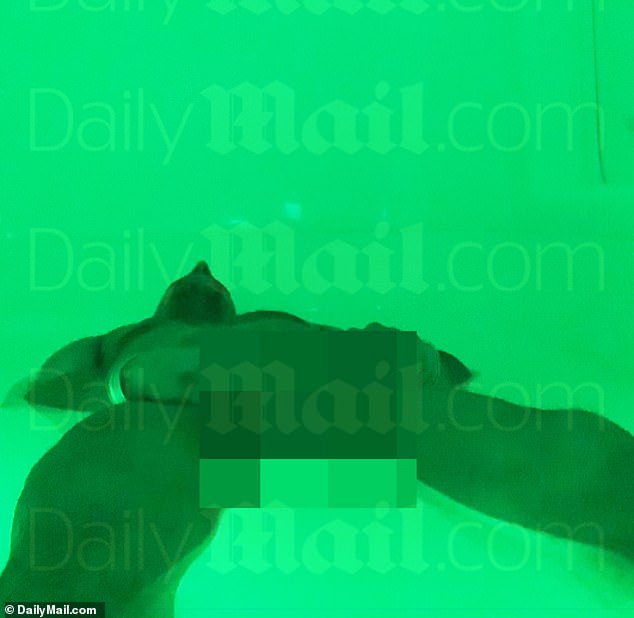 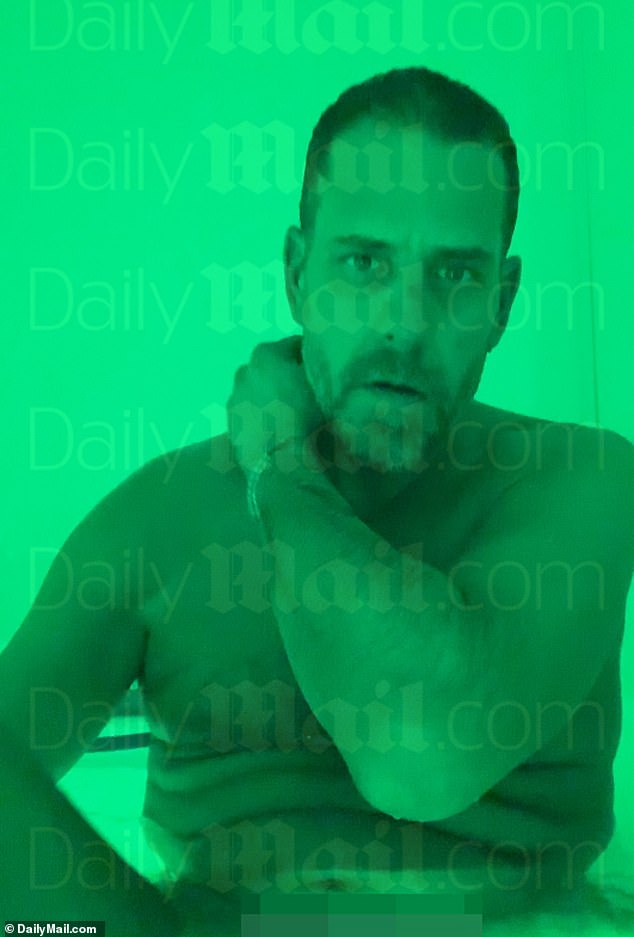 At times, the First Son, 52, can be seen gazing into his camera during the therapy session 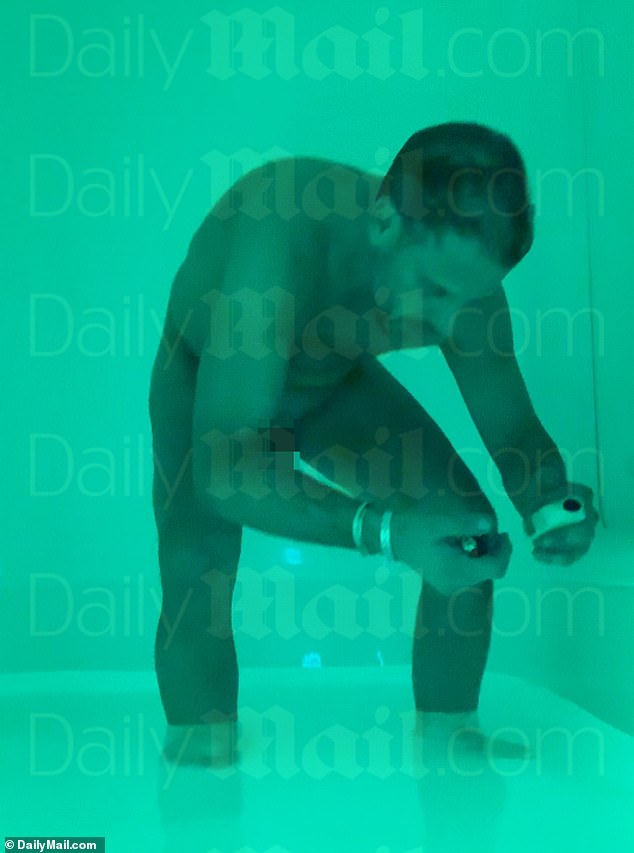 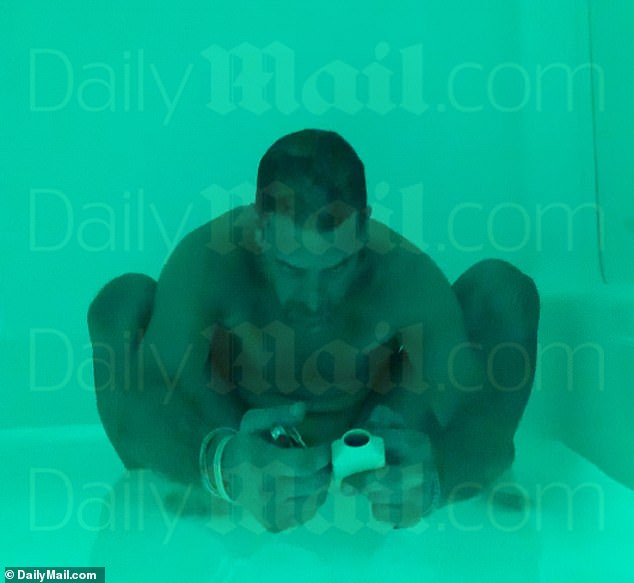 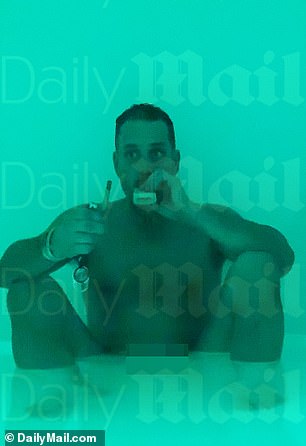 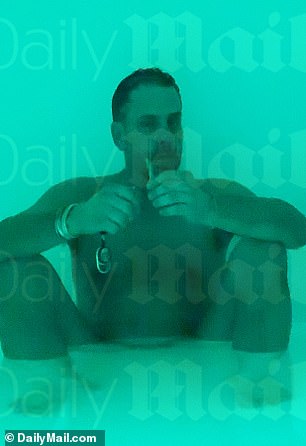 There is no suggestion the staff at Blue Water Wellness were involved in his drug abuse or that anyone else knew what the father-of-five was getting up to as he lounged naked and all alone, in the secluded tank. 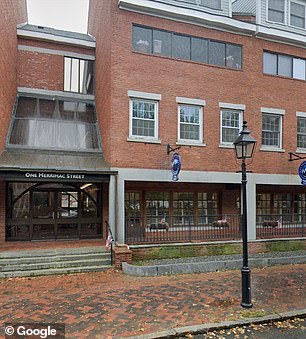 Hunter’s latest humiliation comes weeks after DailyMail.com revealed that, despite his repeated denials, Joe Biden did talk to his son about his shady overseas business dealings.

The Times story pointed out that CEFC’s chairman Ye Jianming had been arrested in China and his top lieutenant Patrick Ho had been convicted in the US for bribing African officials to help Iran evade oil sanctions.

Ye had met with Hunter at a Miami hotel in 2017 to discuss ‘a partnership to invest in American infrastructure and energy deals.’ 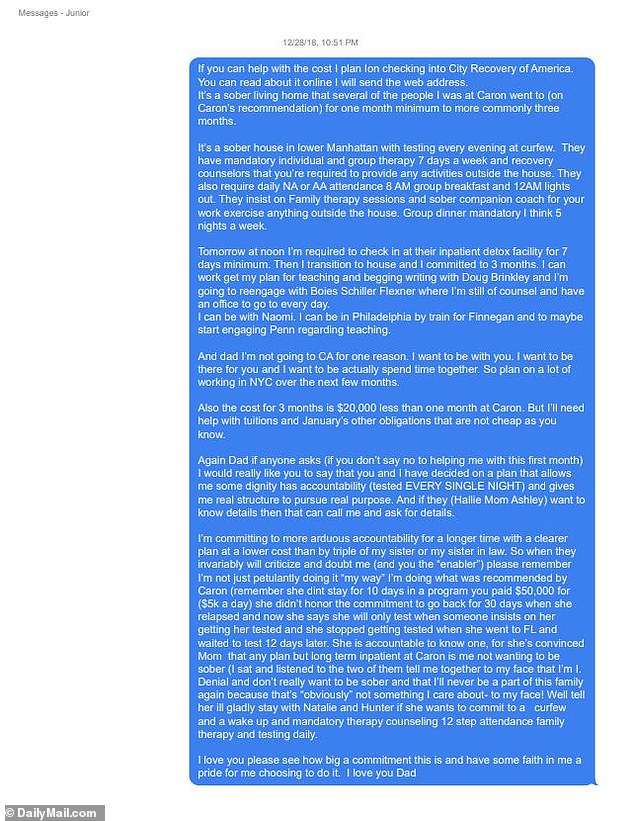 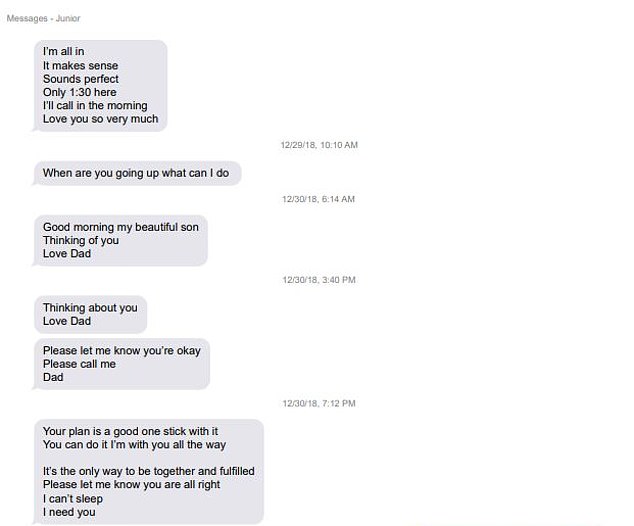 A text exchange from December 28, 2018 shows Hunter had proposed going into a $20,000 treatment facility in New York 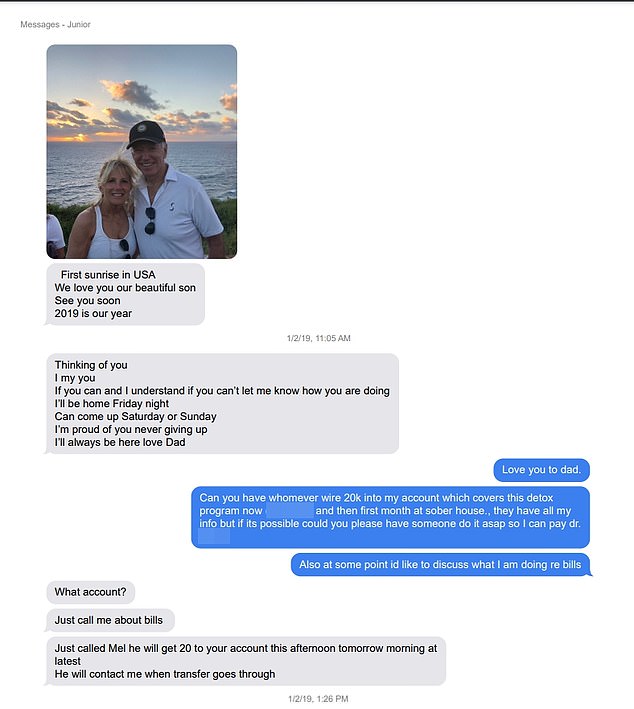 Joe later committed to wiring the $20,000 to his son, texts show, only for Hunter to go to the detox facility in Massachusetts later that month instead 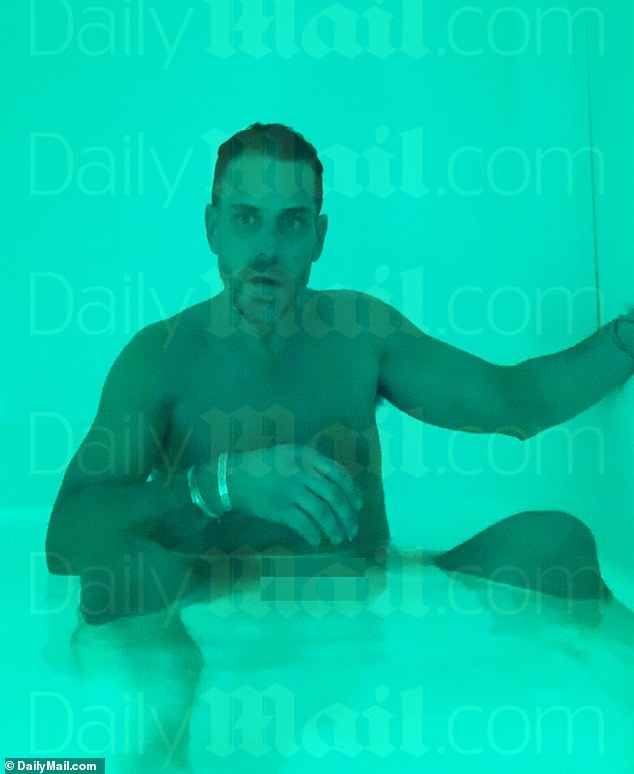 Throughout the video, Hunter silently stares wild-eyed into the camera as ambient music plays softly in the background 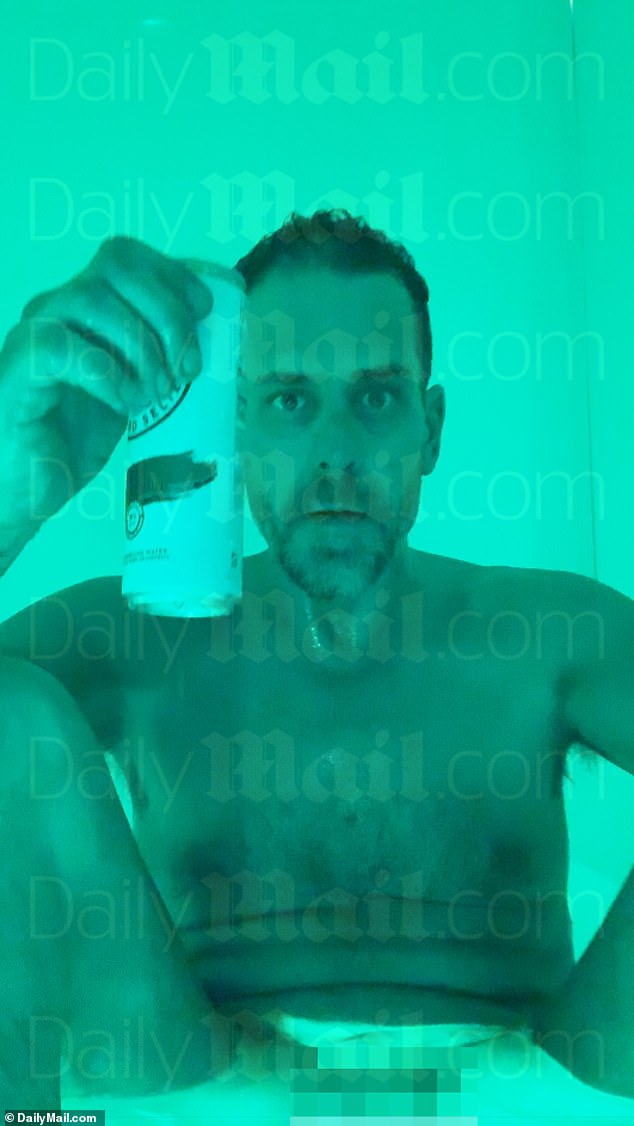 After taking a few hits, he grabs a black cherry flavored White Claw and films himself drinking 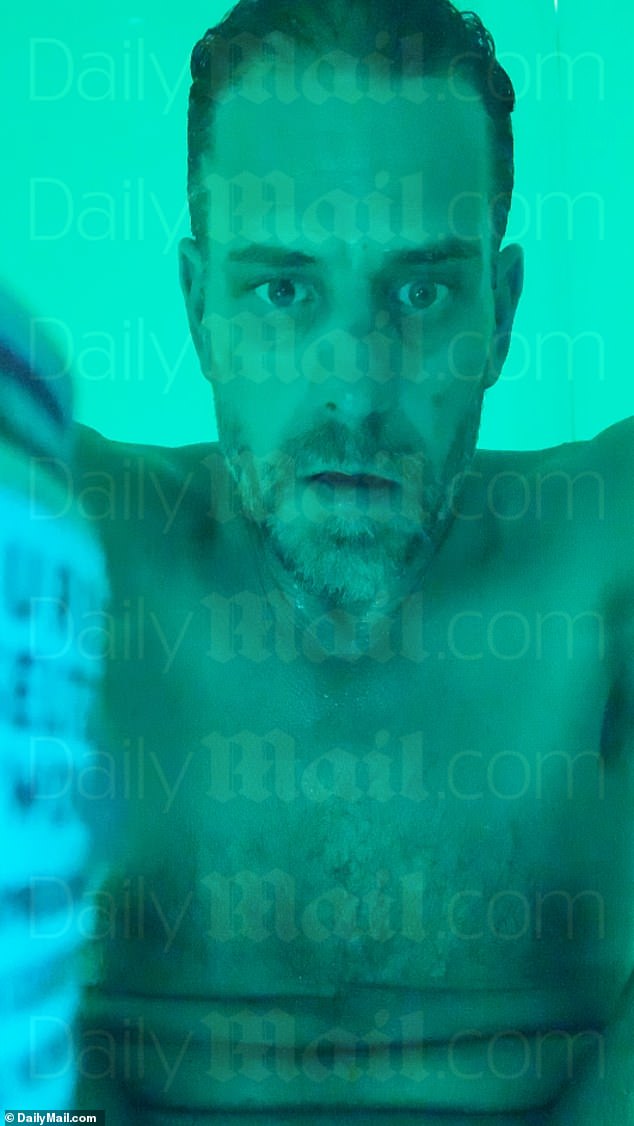 And when Ho was arrested, he called Joe’s brother Jim Biden, according to the Times, who told the newspaper that he believed the call was meant for Hunter.

After seeing the story online, Joe called Hunter and left a voicemail, saying: ‘Hey pal, it’s Dad. It’s 8:15 on Wednesday night. If you get a chance just give me a call. Nothing urgent. I just wanted to talk to you.

‘I thought the article released online, it’s going to be printed tomorrow in the Times, was good. I think you’re clear. And anyway if you get a chance give me a call, I love you.’

The message was the latest piece of evidence presented exclusively by DailyMail.com suggesting that the president lied about not talking foreign business with his son.

In another example, the then-vice president attended a Washington, DC dinner with Hunter’s Ukrainian, Kazakh and Russian business associates in 2015. 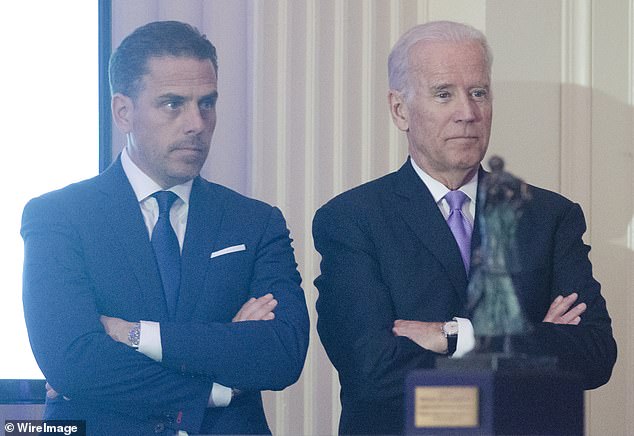 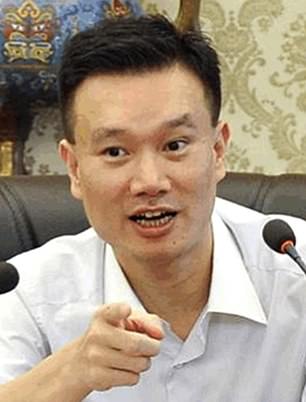 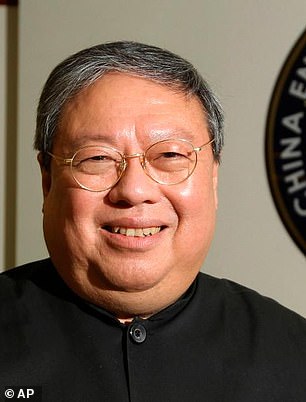 The Times’ 2018 story pointed out CEFC’s chairman Ye Jianming (left) had been arrested in China and his lieutenant Patrick Ho(right) had been convicted in the US of bribery. Hunter accidentally recorded himself referring to Ho as the ‘spy chief of China’

Hunter told one of his guests in an email that the dinner was ‘ostensibly to discuss food security’, but was in fact an opportunity to introduce his potential clients and partners to his powerful father.

The White House at first denied Joe’s attendance, then when photographs emerged of Joe there, it claimed it was only a brief stop by.

He also met another of Hunter’s Chinese business partners, Jonathan Li, when he took his son on a 2013 Air Force 2 trip to China, and entertained Hunter’s Mexican billionaire business partners Carlos Slim and Miguel Aleman Velasco at the White House and the VP’s official residence.

Share
Facebook
Twitter
Pinterest
WhatsApp
Previous article‘Peak inflation is not here yet’: Rents continue to rise, putting pressure on would-be homebuyers. That’s bad news for the Fed.
Next articleFor an explanation of why America needs stricter gun control, ABC News turns to man who shot Reagan (and others) – twitchy.com

People traffickers have launched a £1,500-a-person ‘summer sale’ to cross the Channel illegally in a dinghy – mainly aimed...

Who Is Model Brittany Renner? Video Goes Viral On Reddit, TwitterWiki, Height, Age, Boyfriend, Bio, and Net Worth of...
- Advertisement -

Can Taiwan become the next Ukraine? This is a question that defence and foreign policy experts have been pondering...

Adrian Grenier is an actor, director, and producer from the United States. Adrian is a fantastic musician. He is...

Monday, during an appearance on FNC’s “Jesse Watters Primetime”...
- Advertisement -