Inflation dips slightly to 8.3% but remains near four-decade high

Inflation in the US has fallen slightly from the four-decade high it reached in March, breaking the streak of seven consecutive monthly increases in the annual inflation rate.

The Labor Department said on Wednesday that the consumer price index increased 0.3 percent in April from the month before, for a 8.3 percent gain from a year ago, compared to the 8.5 percent annual increase in March.

However, in a troubling sign inflation is becoming more entrenched, core prices jumped 0.6 percent from March to April – twice the 0.3 percent rise from February to March. Those increases were fueled by spiking prices for airline tickets, hotel rooms and new cars. Rental costs also rose sharply. 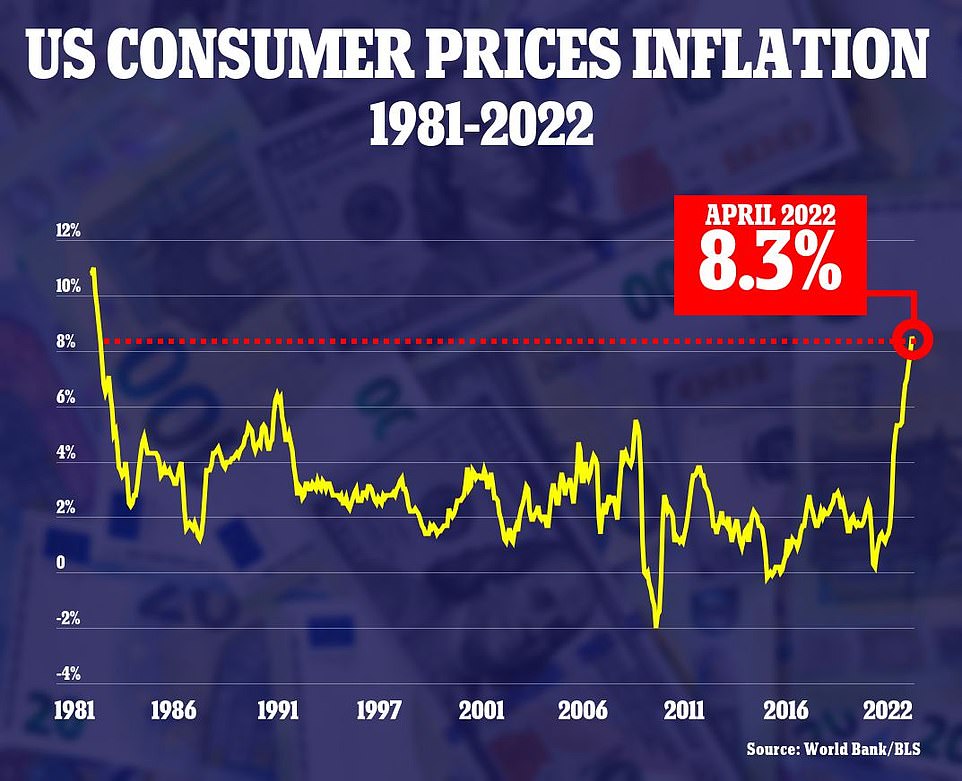 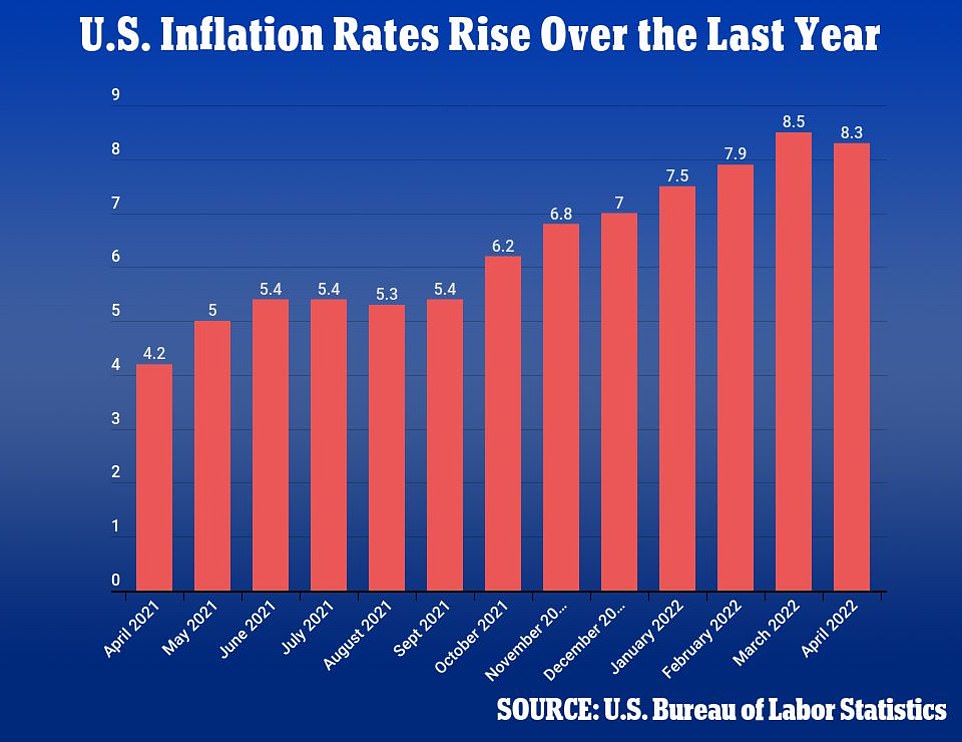 Inflation began to soar in April 2021, meaning that annual increases are now starting from a higher base level

Though it remains well elevated over the Federal Reserve’s 2 percent target rate, April’s inflation reading marks a sign of relief from the prior month, and will likely be touted as progress by Biden.

Experts say that inflation eased as energy prices grew at a more modest pace in April — though that effect could prove short-lived, after US gasoline prices hit a new high this week.

‘April also marks a full year since prices started to dramatically increase, meaning that it’s going to become more and more difficult for 12-month inflation to remain as elevated as it was in March,’ noted John Leer, Morning Consult Chief Economist.

Biden sought to take the initiative Tuesday and declared inflation ‘the No. 1 problem facing families today’ and ‘my top domestic priority.’

‘I know you gotta be frustrated. I can taste it,’ Biden said, speaking to the country from the White House. ‘I think our policies have helped, not hurt.’ 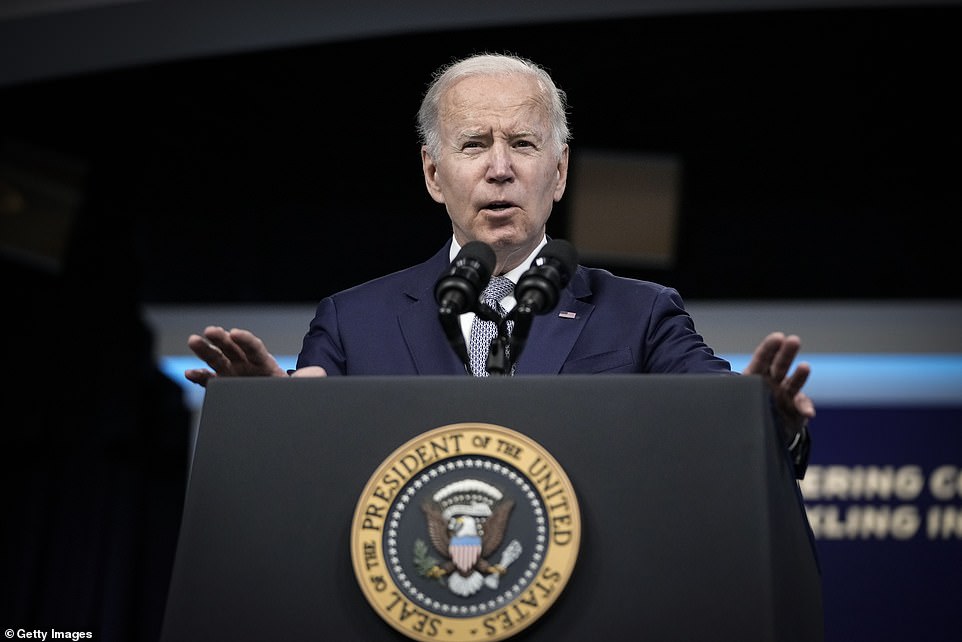 Biden sought to take the initiative Tuesday and declared inflation ‘the No. 1 problem facing families today’ and ‘my top domestic priority.’

Biden blamed chronic supply chain snarls related to the swift economic rebound from the pandemic, as well as Russia’s invasion of Ukraine, for igniting inflation.

He said his administration will help ease price increases by shrinking the government’s budget deficit and by fostering competition in industries, like meatpacking, that are dominated by a few industry giants.

Earlier signs that U.S. inflation might be peaking didn’t last. Price increases decelerated last August and September, suggesting at the time that higher inflation might be temporary, as many economists – and officials at the Federal Reserve – had suggested.

This time, though, several factors are pointing to an inflation peak. Gas costs, which soared in March after Russia’s invasion of Ukraine, fell on average in April and likely slowed inflation.

Another factor will be how sharp price increases from a year ago affect the new inflation calculations.

The prices of many goods spiked last spring as the economy reopened and a surge in demand overwhelmed supplies.

But this year, monthly price increases for many goods have been slowing. That may have the effect of easing the year-over-year inflation rate.

Furniture costs, for example, had jumped 1.8 percent just in March 2021 and 2.1 percent the next month. Yet this March, furniture rose only 0.6 percent, potentially lowering year-over-year inflation.

Spies have made more than 10,000 ‘disguised approaches’ to Government officials, head of MI5 warns

Chrissie Swan stepped out in style on Tuesday for the opening of a new Priceline store. The media personality had...

Editor's note: The below interview contains spoilers for Season 6 Episode 6 of Better Call Saul, "Axe and...

Who is Susan Lucci? Susan Lucci has a number of professional titles, some of which are a soap series star,...
- Advertisement -

Feared mobster Masood Zakaria is on the run after a failed hit on a gangland rival - but he'll...

Many people who voted for Britain to leave the...
- Advertisement -

Roman Abramovich’s era at Chelsea ends in Wembley heartbreak, when will they return?