The Italian national football team’s open-top bus Euro 2020 victory parade through Rome has been partly blamed for a Covid outbreak in the city.

Daily cases have risen five-fold in the capital over the past month, and now average more than. And Lazio — the region encompassing Rome — now accounts for around a fifth of all of Italy‘s daily infections.

One of the city’s most senior health chiefs, Alessio D’Amato, said the surge was down to the ‘Gravina effect’.

Gabriele Gravina is the president of the Italian Football Federation (IFF) and helped convince city authorities to allow the parade to go ahead. The Italian team’s victory lap drew thousands onto the streets on July 12.

But official data shows cases were already going up across Lazio before the parade, with the rise coinciding with the major football tournament.

British experts have also blamed the Euros for fuelling the epidemic in the UK, where infections have now spiralled to nearly 50,000 a day. 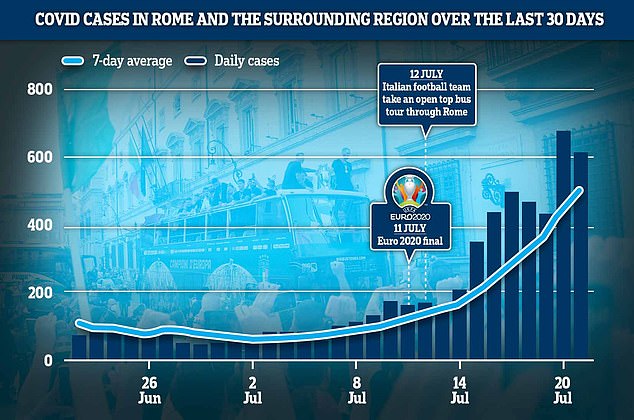 Covid cases have spiralled five-fold in Rome following Italy’s victory in Euro 2020, with an average of 600 infections now recorded daily 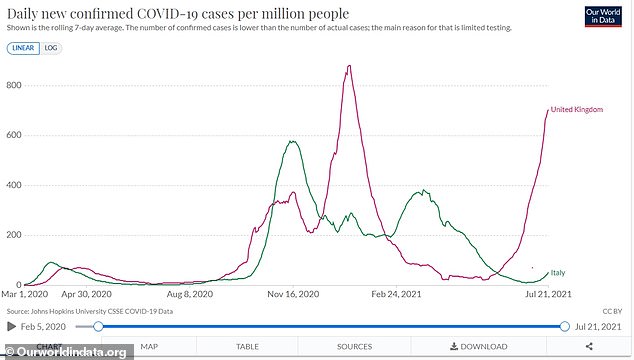 Covid cases in Italy and the UK are surging following the Euro 2020 tournament, with experts in both countries blaming the football for the rise. Italy’s infections have tripled in less than a fortnight (green line) but in the UK they have surged to almost 50,000 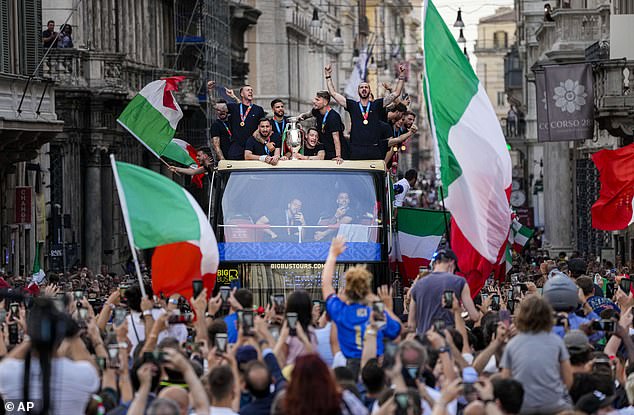 Italy’s football team paraded through the streets of Rome on July 12, following their victory at Euro 2020 football tournament in Wembley 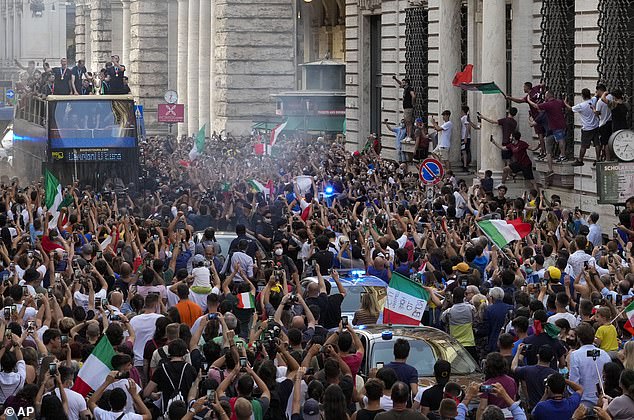 Hundreds of new cases in Rome have been linked to people watching the games and partying in bars after Italy’s victory on July 11.

One outbreak at a bar in Monteverde, a neighbourhood in the capital, was linked to more than 100 cases, according to the Italian Insider.

Experts say people crowding together to watch Italy’s progress in the tournament, which began in June, also helped to fuel a surge in infections.

Health chief D’Amato said: ‘We are paying for the so-called “Gravina effect” albeit without complications in hospitals.’

He added: ‘The cases are still going to increase due to the effect of the “power outage” (disregarding social distancing rules) on the occasion of the Euros celebrations, which will last a few days.

‘Those positives are mostly young people still not vaccinated and this means, once again, it is important to keep vaccinating to reach herd immunity.’

Across Italy cases are also surging after the victory, and have tripled in less than two weeks. They are now at their highest levels since May.

But hospital admissions in the country are yet to increase, although experts fear they will rise as almost half of Italians are yet to be vaccinated.

The head of Rome’s public safety authority, Matteo Piantedosi, says the tour through the capital ‘was not authorised’.

He told newspaper Corriere della Sera: ‘We had denied permission to celebrate Italy’s victory in the European Championships on the open bus, but the pact was not respected.’

He added police had ‘no choice’ but to let the parade go ahead after captain Giorgio Chiellini and key centre-back Leonardo Bonucci insisted on it.

The IFF said it had acted responsibly but decided not to disappoint fans who had come to celebrate with the team.

But experts are hoping it will follow Scotland’s trajectory where infections dipped sharply three weeks after their team was knocked out of the tournament.

Scotland recorded a peak of 3,000 infections a day on June 30, the highest number since the pandemic began. But this has now plummeted by 40 per cent to 1,800 a day.

Covid cases surged among men in their 20s after Euro competition

Coronavirus cases have spiralled quicker among men in their 20s compared to women, official figures showed.

Public Health England data published last week found 10,267 more young men than women were infected over the two weeks to July 12, with the gender gap having widened since the tournament kicked off.

Cases have remained roughly the same between men and women throughout the pandemic. But they began to diverge after June 13, when England beat Croatia 1-0 in their first match. 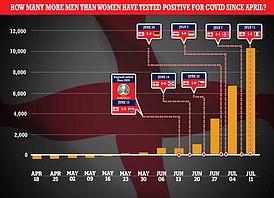 Some scientists have already blamed the football tournament for driving a ferocious surge in cases, after people crowded together in pubs and homes to watch the matches and tens of thousands of fans packed inside Wembley for England’s six home games in London.

She recently revealed she has decided to get reconstructive...
News

Xi Jinping and Vladimir Putin will attend the G20...
Sport

Five-year old girl Grace Hughes – who has been...
- Advertisement -